This occurs because most industries and human-made organisations take water from a natural source as a cooling method for their machinery. Then it is put back to the natural environment at a higher temperature.

In this article, We are providing students with a long essay sample of 500 words and a short essay sample on 150 words on the topic of Thermal Pollution for reference.

To be more precise, “Thermal Pollution” comes from hot and cold wastewaters which are disposed of by several factories and organisations into bodies of water, leading to the change in natural water resource temperature that can have an acute effect on the sea and ecosystem.

The primary sources of Thermal Pollution are Nuclear Power Plant, i.e. it utilises water as a cooling medium; Domestic Sewage- wastewater released by industries, hospitals etc. sewage is commonly discharged into lakes, river, streams and canals, and the foul-smelling gases result in the death of aquatic organisms; soil erosion – which makes the water muddy; coal-fired power plants- it damages the marine organisms as coal is used as a fuel; crude oil refineries which boiler from industries discharge a large amount of heat.

All of these sources change the oxygen level and can have adverse effects on aquatic life. Thermal Pollution encompasses a decrease in the amount of water which marine life needs. An unexpected increase in the water temperature causes reproductive issues, and hot water may decrease the fertility of some organisms other species may endure congenital disabilities or may lay distort eggs.

Aquatic species like mollusc, fish, plankton, algae, and protozoa are more comfortable in cold water due to the existence of more oxygen, and they are exceptionally delicate to immediate temperature changes. Thus they die due to sudden change in the temperature of the water.

Wastewater discharged from the industries leads to water pollution. Industrial wastewater contains toxic and unidentifiable chemicals that pollute the water and affect the aquatic organisms. It decreases the density and solubility of gases in water and increases the speed of suspended particles, affecting the food supply of marine organisms.

Temperature is considered to be one of the most significant to metabolism, physiology and biochemical processes that control respiratory rates, excretion, and overall growth of aquatic organisms. The fish are most affected by thermal Pollution as they die due to the respiratory system’s failure and nervous system.

Temperature alteration of even one or two degrees Celsius can cause significant changes in metabolism and organisms. Aquatic plants grow faster in warm water, which results in overpopulation. Like algae growth increases, other aquatic plants cannot perform photosynthesis due to lack of light, and other marine organisms may die because of oxygen depletion.

Cold water holds more oxygen than warm water. As an outcome, an increase in the temperature also lessens the oxygen-containing capacity of water. Thus, dissolved oxygen (DO) is one of the most chief indicators. It is vital for the longevity of fish and other aquatic organisms. It limns the decrease in the concentration of oxygen in water bodies which proceed to the aerobatic environment and eventually death of marine life. Thermal Pollution can change aquatic organisms’ ecology that can reduce the habitant, and overall Natality may decrease. Short Essay on Thermal Pollution is helpful for students of classes 1, 2, 3, 4 and 5.

When a power plant opens for the first time or shuts down for repairing or other causes, fish and other aquatic organisms apt to a particular temperature may die by a sudden change in water temperature (either increase or decrease) known as thermal shock. To nurture aquatic life and environmental health, we need to control Thermal pollution. Another possibility to control Thermal Pollution is to use a “cooling tower”, where the water and air are brought into close contact with each other to reduce the water temperature (i.e. Evaporation)

Wastewater from industries may be controlled with cooling ponds (artificial bodies of water that will cool down the water by evaporation, convection and radiation). Cooling towers help in transferring atmospheric heat by evaporation. And we may also control thermal Pollution by cogeneration (a process that recycles heat for domestic and industrial purposes). 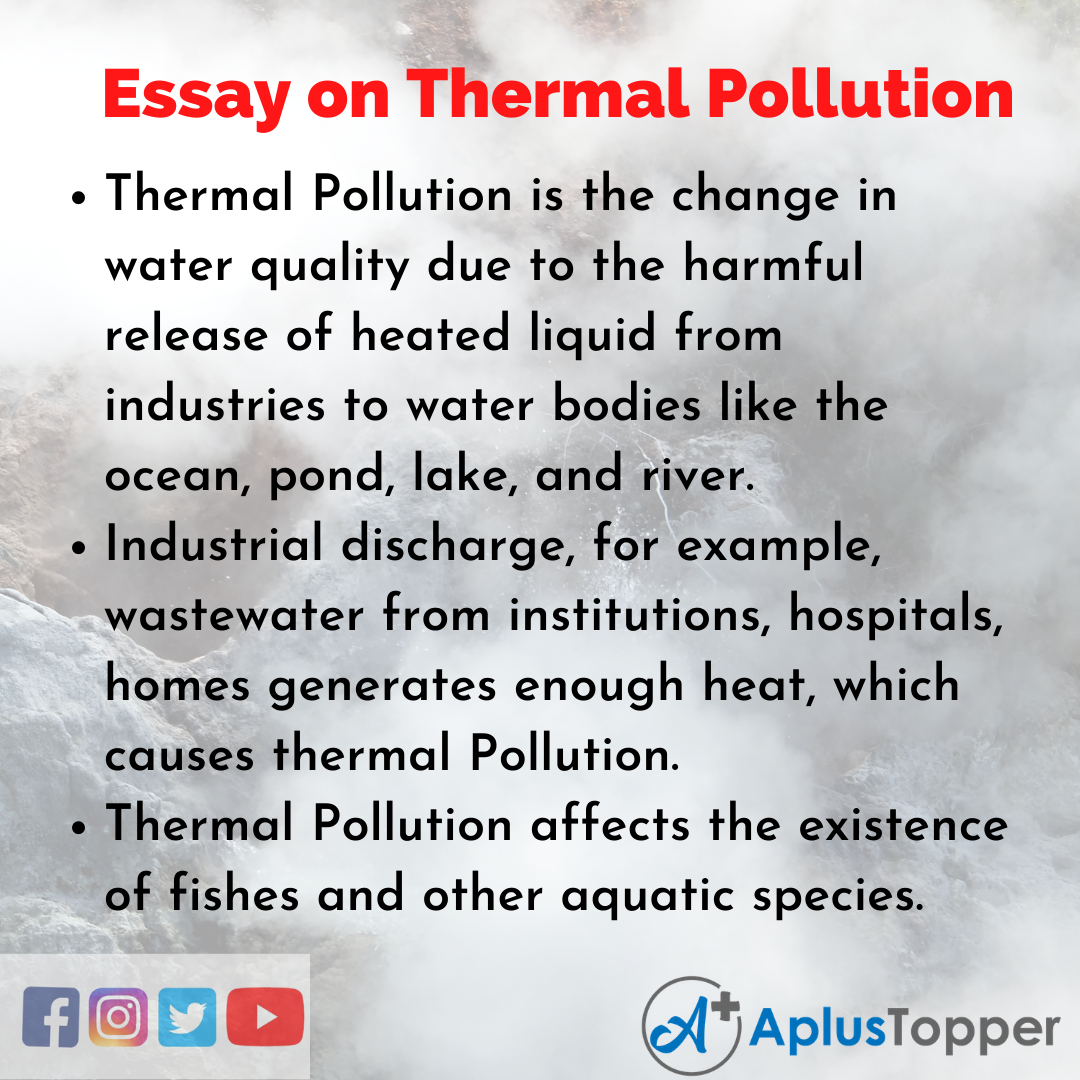 FAQ’s on Essay on Thermal Pollution

Question 1.
How can we prevent Thermal Pollution?

Answer:
Industries, Hospitals, and human-made Organisations can cool their types of machinery in human-made reservoirs before they are submerged directly into water bodies or by using the cooling pond, i.e. a made pond or lake from which heat is dissipated.

Question 2.
How is Thermal Pollution measured?