Essay on The Menace Of Terrorism: Terrorism is a problem which many countries have been continuously facing for decades, but now it has emerged as a ‘global’ problem against which an internationally united battle has to be fought incessantly. Violent behaviour in order to create an atmosphere of fear in the society or for misplaced political ends is generally termed as Terrorism. It is an organised and systematic use of violence to achieve an unrealistic end. Many a times words like terrorism, insurgency, Civil War, Revolution, Guerrilla 5 War, intimidation and extremism are often used interchangeably. Though they differ in kind and meaning, one thing is fundamental to all the word ‘Violence’. For instance, great practitioners of fear and violence like Hitler, Mussolini, Stalin, Mao etc., cannot be called Terrorists.

Long Essay on The Menace Of Terrorism 500 Words in English

Below we have given a long essay on The Menace Of Terrorism of 500 words is helpful for classes 7, 8, 9 and 10 and Competitive Exam Aspirants. This long essay on the topic is suitable for students of class 7 to class 10, and also for competitive exam aspirants.

Moreover, violence used for personal gains like dacoity or robbery cannot be termed as Terrorism. Terrorism, as understood in the simplest sense always aims at a target group for killings and destruction of property through acts of violence. It is also illegal and unlawful in nature, as such acts are done with a purpose of creating fear and panic in the minds and psyche of people at large, to make the masses feel impotent and helpless, to discourage rational thinking and to lead to a reactionary tendency amongst the people.

Terrorists resort to various ways to accomplish these aims like planting crude home-made bombs, hand-grenades or other explosives in shopping centres or a crowdad place like a railway station or a bus stand or even in a bus, train or aeroplane; kidnapping, assassination or hijacking. Different terrorist activities all over the world may have different aims, but a few goals, common to all, may be underlined. It may be because they want a regime to react to their demands or they intend to gain mass support by creating fear and panic, or to eliminate their opponents and enemies, or to further their cause.

Other reasons for this ongoing and increasing terrorism are many young people often join a terrorist organisation because they are looking for an identity for themselves. Having a traumatic experience as a youth in particular is a motivating factor in deciding to become a terrorist. Georgetown professor Bruce Hoffman has said that terrorist recruiting based on perceived injustices, especially by saying that West is hostile toward Islam, is a point terrorist recruiters drive home. Also in many ways internet serves as a virtual training camp. Internet can instruct how to build bombs, join an organisation, fund terrorism and share information.

Terrorism in India, is essentially a political creation. The cross-border militancy in Kashmir, the Naxalite violence in Bengal, Bihar, Jharkhand, Andhra Pradesh and Chhattisgarh all have their narrow and distorted political goals. The problem of identity led to terrorism in Nagaland and Mizoram, vengeance became the cause of terrorism in Manipur and Tripura while ‘class enmity’ erupted Naxalite violence in different parts of Bengal, Bihar and Andhra Pradesh. The blowing up of the Air India Boeing ‘Kanishka’ killed nearly 300 innocent people, the violence against common Kashmiri populace, the Naxalite insurgency are all ugly faces of the demon of terrorism. May 2014 Chennai train bombing, February 2013 Hyderabad blast, June 2013 Srinagar attack were all handiworks of terrorists. 26/11 or 2008 Mumbai attack which continued for four days targeted more than 10 locations across Mumbai and killed 164 people, Samjhauta Express bombing in 2007, the endless list indicates the severe threat to humanity. These attacks are intended to capture National and, International attention. This inhuman massacre of innocent human beings has made Tony Blair say “This mass terrorism is the new evil in our world today.”

The terrorist attack on World Trade Centre and the Pentagon in USA on 11th September, 2001, the siege of innocent children as hostages in Russia etc indicate the growing magnitude of this problem. However, to combat terrorism, US conducted a firefight attack in Pakistan in 2011 and killed Osama Bin Laden, the most hunted man in the world and the mastermind of the devastating 9/11 attack on America. 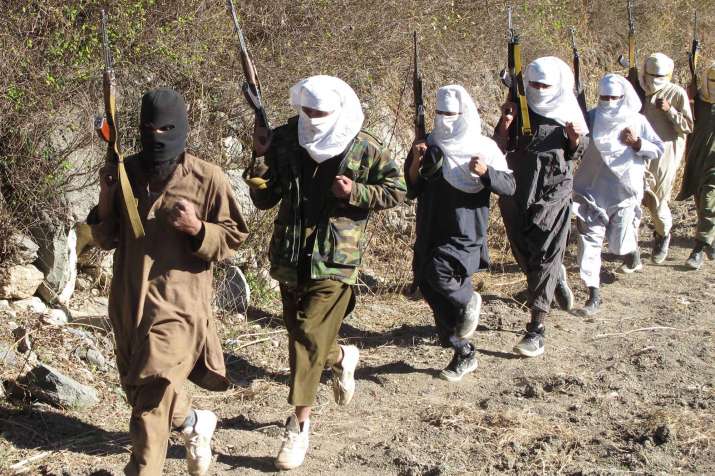 Short Essay on The Menace Of Terrorism 200 Words in English

Below we have given a short essay on The Menace Of Terrorism is for Classes 1, 2, 3, 4, 5, and 6. This short essay on the topic is suitable for students of class 6 and below.

All the members of States of United Nations have agreed to a common strategic and operational framework to fight terrorism. The strategy forms a basis for a concrete plan of action to strengthen the role of the United Nations in combating terrorism and to ensure the respect of human rights while countering terrorism. A number of intelligence, military and police organisations within the Indian Government also contribute to counter terrorism efforts. India has several intelligence agencies that monitor terrorist activities. The Research and Analysis Wing (RAW) is the external intelligence agency and the Intelligence Bureau (IB), a division of the Home Affairs Ministry, collects information inside India.

David Hackworth has rightly said “Fighting terrorism is not unlike fighting a deadly cancer. It can’t be treated just where it’s visible every diseased cell in the body must be destroyed.” Hardly a week goes by without an act of terrorism taking place somewhere in the world, indiscriminately affecting innocent people, who just happened to be in the wrong place at the wrong time. The world has to unite in order to face this growing menace of terrorism. The world cannot survive with prosperity under the continuous threat of fear, violence and bloodshed. Thus, strict measures and serious efforts should be made to end violence and shedding of the innocent blood.

11 Lines to Remember Essay on The Menace Of Terrorism