Essay on Thane: Thane is usually referred to as the lake city, and it comes under Maharashtra. The amount of area covered by Thane is around 150 sq.km. The population of Thane is over 2.4 million. It is also widely known as the Shri sthanak. This city is situated near the northeast portion of Mumbai.

Located on Salsette Island, this city has an elevation of around seven meters above sea level. It is entirely covered up by hills, mostly comprising of the Yeoor and the Parsik Hill.

We provide students with essay samples on a long essay of 500 words and a short essay of 150 words on the topic Thane for reference.

Back in 1853, Thane was referred to as Thana. It is known to be one of the oldest towns in the suburb in Mumbai. It is also widely known as the city of lakes since it has over30 lakes. Due to the Thane Creek, this city has been separated into two portions. The stream of water comes from the Arabian sea and the Ulhas river, which creates a firth referred to as the thane creek. Therefore, the atmosphere of this city is normally cool and pleasant as compared to that of Mumbai. For the Mumbai Metropolitan, it is one of the most important and primary resources of water.

This city was established back in 1787. Thane was considered a major and important port under the Muslim government’s rulership in the 14th century. The formation of Tanasi, a type of cloth, also took place in Thane. Back in 1321, Thane witnessed the execution of St. Thomas for blaspheming Muhammad. Later in 1774, this city was taken over by the British government.

This city mostly has a climate that is wet and dry. The climate of Mumbai and that of Thane is a bit similar, and during the season of monsoon, both of these cities receive heavy rainfall. Besides, there are no problems while travelling to Thane, since most of the trains stop in this town. It is also easier to travel by aeroplane as the Mumbai airport is situated near the city.

In Thane, several people mostly use the language Marathi to communicate. The tradition and the culture of this city are very beautiful and vast. Besides, it is also widely famous for its celebration of festivals with utmost happiness and excitement. During the festivals, the city is normally filled with bright and sparkly lights all around, which gives the city an elegant look.

This city comprises almost 30 lakes. Some of the most elegant and attractive lakes are the MasundaTalao, also referred to as the Talao Pali. This lake provides facilities like water scooters and boating. Other important lakes are KacharaliTalao, Upvan Lake, etc.

There are numerous festivals celebrated, including the Navratri, Durga Puja, and Ganesh Chaturthi. Besides, many sports are organized in this city, such as the DahiHandi sport during Gokulashtami. The people that win in this sport event get a reward of almost one million rupees. These types of festivals and events have increased in the past few years. Besides, many clubs take it on themselves to offer the biggest and best DahiHandi event. Some of the top ones include the Panchpakhdi, Open House, Tembhi Naka, Vartak Nagar, and Jambil Naka.

In the central railway division of the Indian Railways, the thane station is included. The distance between the thane station and the station of Mumbai is around 34 km away. Three stations are included in it, including the Mumbra, Diva, and Kalwa, which are also considered the Thane suburbs. The first train across the country was built in this city back in 1853. 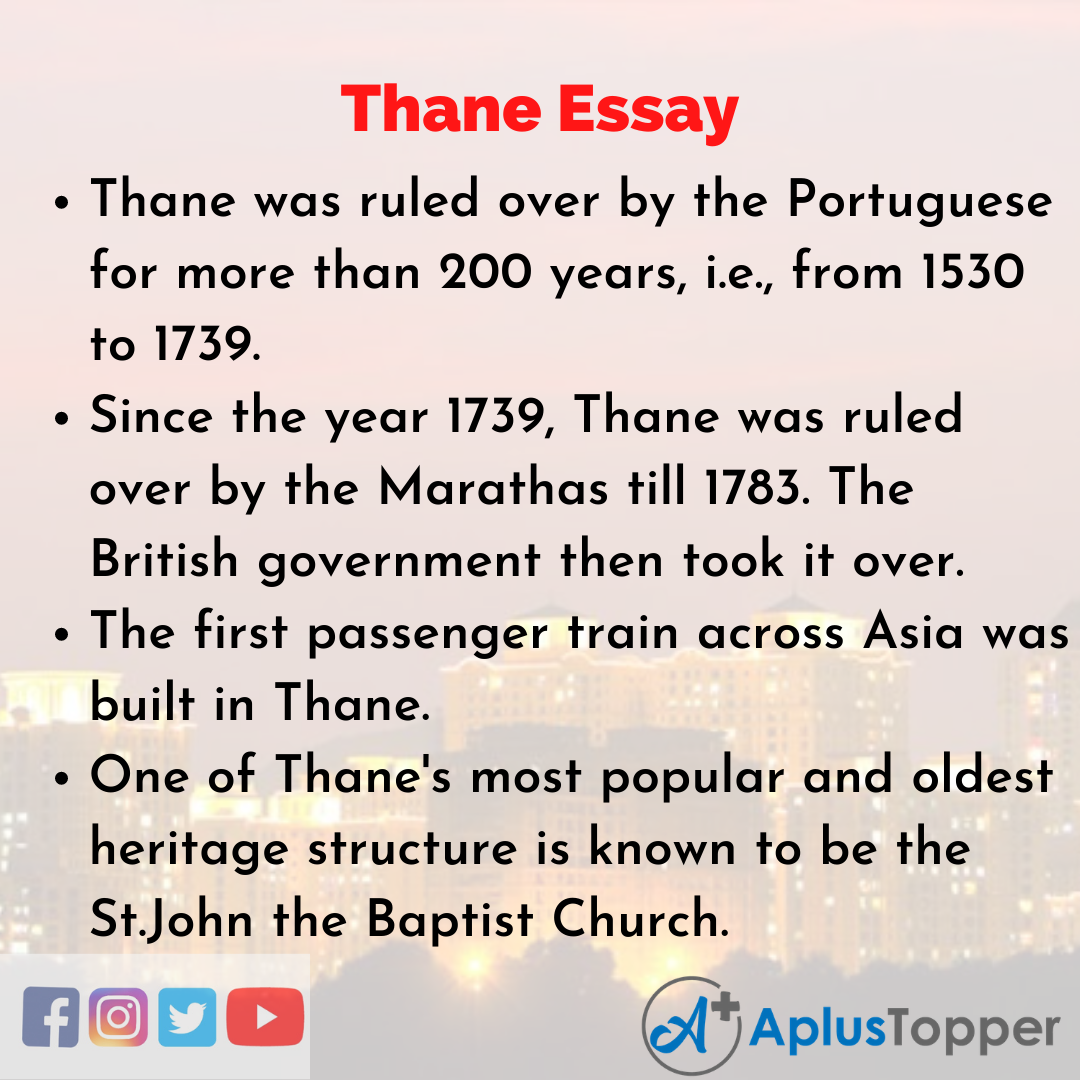 This city is known to have a high population and is a metropolitan city. It is situated near Mumbai. Besides, it also overlaps with the Taluka region of Thane. This city is widely popular for its beautiful monuments, museums, and other historical places.

One of the oldest temples in Thane is the Kopineshwar temple present in the Thane district. Besides, this city was popularly referred to as Sri Sthanaka. This city used to be a vital centre for Portuguese trading until the Marathas took over the city in 1739.

Thane is well-known to serve a variety of tasty dishes, snacks, and sweets. Here, several festivals are hosted, ranging from Holi toJanamastami. There, it proves the coexistence of people from several different cultural and religious backgrounds. In addition to having traditions near to nature, this city maintains high standards in regards to economic as well as industry growth. Thus, it is also known as the city with the most resources.

10 Lines on Thane Essay in English

1. Thane was ruled over by the Portuguese for more than 200 years, i.e., from 1530 to 1739.
2. Since the year 1739, Thane was ruled over by the Marathas till 1783. The British government then took it over.
3. The first passenger train across Asia was built in Thane.
4. One of Thane’s most popular and oldest heritage structure is known to be the St.John the Baptist Church.
5. This city also has one of the oldest and most beautiful temples called the Kopineshwar temple.
6. Thane’s railway station is considered to be one of the busiest in the entire country as it accommodates almost 654,000 people.
7. Thane normally has a temperature ranging between 22 degrees Celsius to 36 degrees Celsius.
8. This city is considered to be one of the most populated cities in India.
9. Kelwa beach, situated in Thane, is famous among tourists of Mumbai.
10. The most important pilgrimage spot in Thane is the Titwala Ganesh Temple. 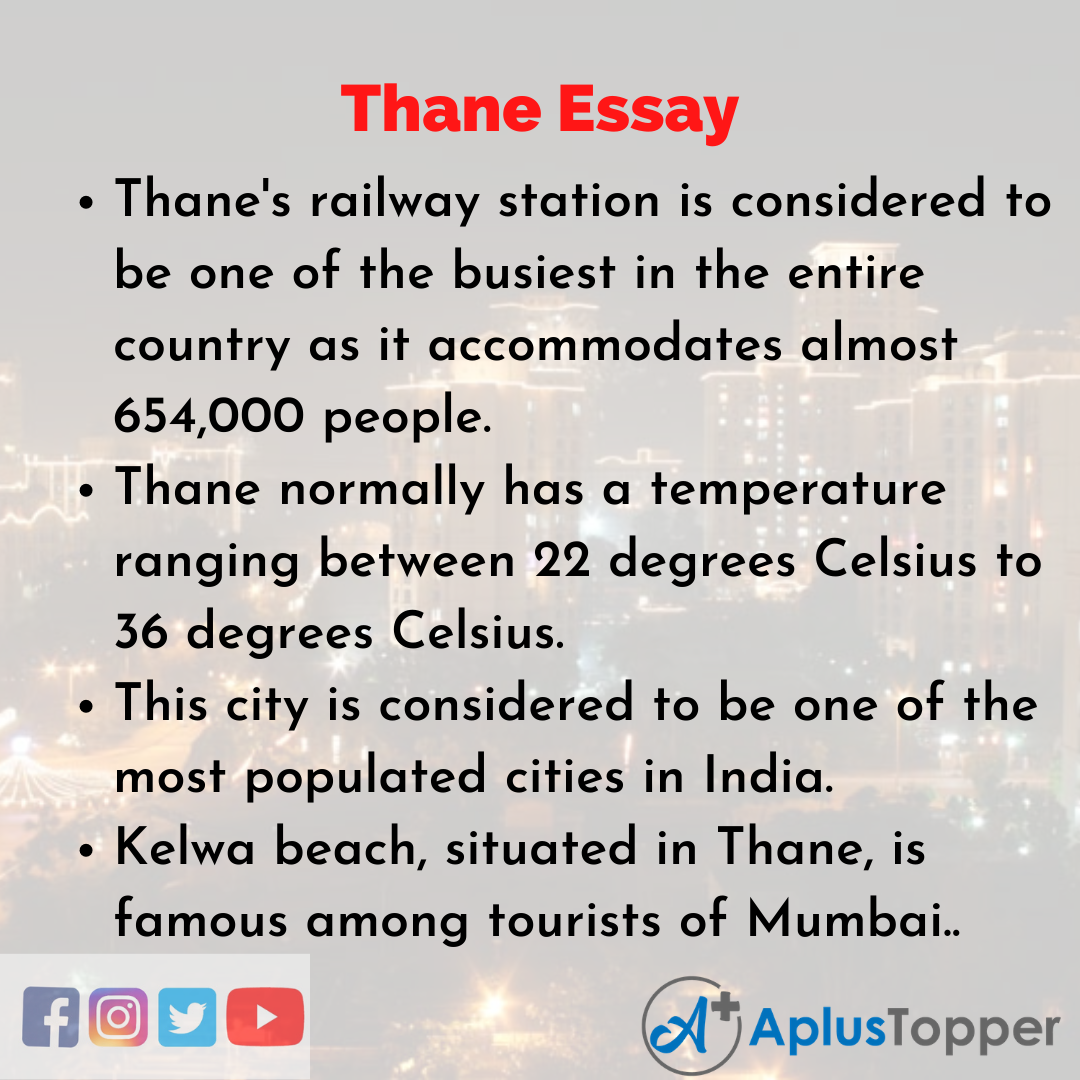 Question 1.
What is the reason behind the popularity of Thane?

Answer:
This place is widely known due to the availability of mouthwatering delicacies along with a splendid celebration for festivals.

Question 2.
What is the time considered to be pleasant to visit Thane?

Answer:
You can travel to Thane between October to March.

Question 3.
Which places are famous in Thane?

Question 4.
Which are the most delicious dishes available in Thane?