Essay on Terrorism in India: Terrorism is the use of ‘terror,’ as the word itself suggests, by violence or other means to further an agenda, be it political or otherwise. There is a growing threat of terrorism worldwide, and no nation is exempt from it. India has faced multiple terror attacks over the years, and each one has left a deep scar.

Terrorism affects the nation’s economy, tourist industry and, in general, creates a sense of panic all around. But more importantly, it is the lives of people that are lost. Over the multiple terror attacks that have taken place in India, countless people have lost their lives. Be it victims who were caught in the violence or brave civilians and officers who stepped in to save others. Basically, there can be no room for terrorism to grow in a nation if the nation is to prosper and grow, as terrorism can lethally handicap growth.

Short Essay on Terrorism in India 150 Words in English

Terrorism is a very real threat that India faces. Through the years, we have seen various terror attacks on different parts of the nation. The one thing that comes to mind when we think of this is bombings. India faces terrorism of two types – internal and external. External being attacks that are mediated by individuals outside the country and those that are from within the nation. The former causes strain in foreign relations and can even threaten war. The latter is something we see more often. There are terrorist cells that operate in the nation. They have all created tension within the country, as well as a sense of fear and panic. The fear of bombings is a very real fear as many have lost their lives after being caught in these. Be it civilians, security personnel, policemen, or army men. Terrorism is a very real threat that must be dealt with.

It is said that terrorism knows no religion. This is because no religion preaches the use of violence and terror to spread its agenda. Terrorism’s true religion is to rule with fear and intimidation. And this is the violence that is imposed on people that unfortunately get caught in heinous attacks.

From what is recorded, terror attacks in India began in the 1970s. While the number of incidents varies yearly, the average only seems to be increasing. However, with the Government’s measures, the number of casualties is decreasing little by little. Some examples of these are the attacks in the now Union Territory of Jammu and Kashmir, the 26/11 attack, train bombings in various cities, etc.

In all these attacks, over the years, thousands have lost their lives. Civilians that happened to be in the area where the attack was mediated and army and police officers that have fought off terrorists and given up their lives for it. Terror attacks are a deadly threat that the nation takes very seriously. And many measures have been taken over the years to stop the attacks before they happen when possible and take out other terrorists to curb the damage.

India has faced terror attacks frequently over the years. Be it at the borders, our cities, or even at the heart of the nation that is the capital. While it is often said that these attacks have had a religious plan, that is not true at all. Not a single religion preaches violence and death upon people.

India has seen single attacks as well as serial bombings, such as the bombings that took place in 2000. The Government has made strides to fight these attacks and to keep the people safe.

Countless people have lost their lives in these attacks over the years. These attacks do not discriminate between age or any such factor. Many have died, and their families have been heartbroken due to this. Those who survive also face issues such as survivor’s guilt as well as Post-Traumatic Stress Disorder.

In other ways, these attacks also affect the economy, the tourist industries, and foreign investment. Anything that affects the economy has a ripple effect that all people feel. The damage of a terror attack goes far beyond the attack itself. It spreads panic and fear and also leads to brain drain as people begin to feel unsafe and leave the nation.

Terrorism is a threat that affects the victims of the attack and the future of the entire nation. With more stringent measures taken, it can be put an end to once and for all. So that the citizens of the country and their futures are secure. 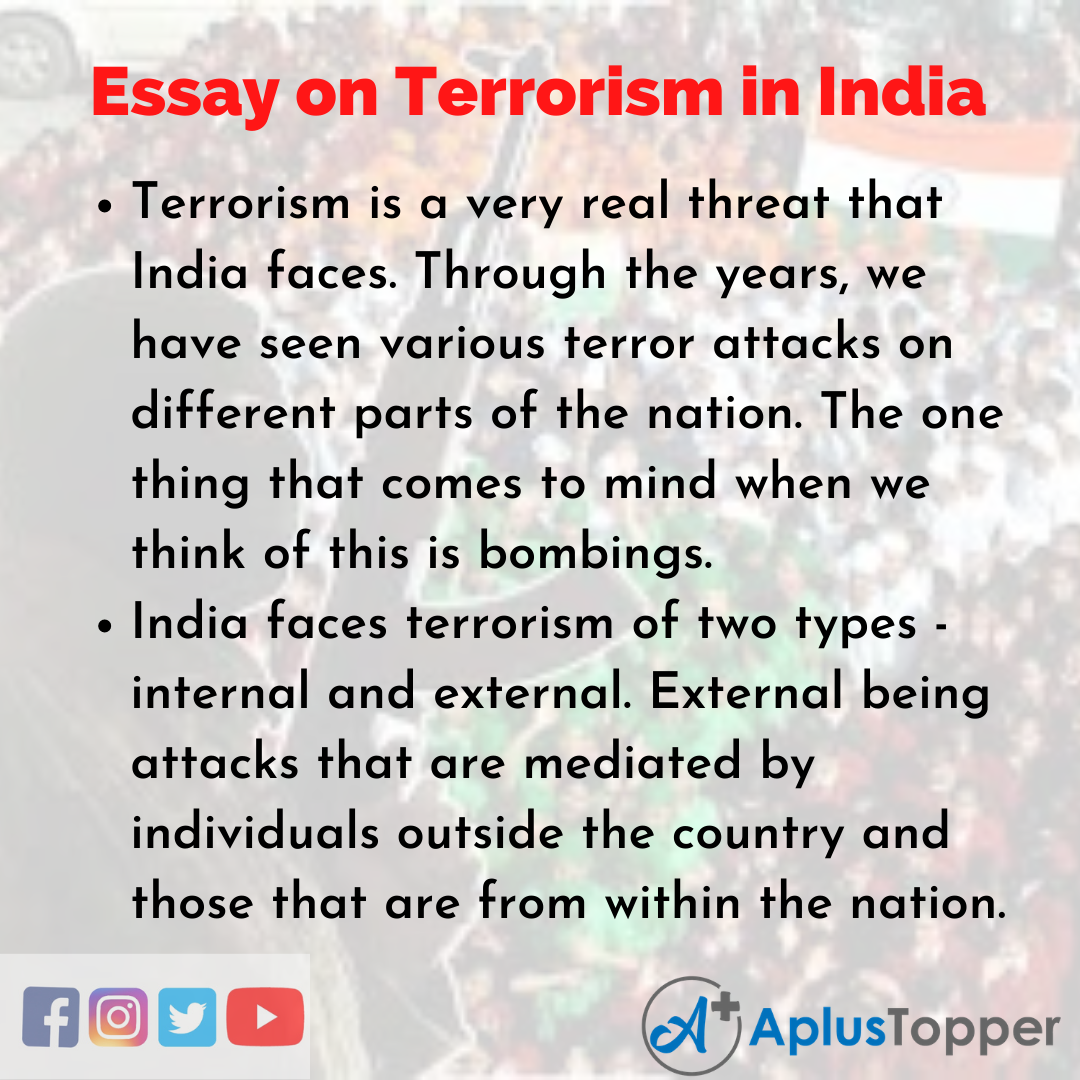 Terrorist groups exist to create fear and panic among people. They succeed by violent attacks and intimidation. India is not a stranger to such attacks as it has seen many from the 1970s till date. Terror groups that have attacked India exist within the nation and some outside.

This is a list of some of these groups that operate in India.

Four types of terrorism exist in India – Religious Terrorism, Narco-Terrorism, Left-Wing Terrorism, and Ethno-Nationalist Terrorism. While their agendas might be different, all of these groups aim to spread fear and panic to further their goals. Here are some of the causes of this act:

While terrorism knows no religion, many groups commit crimes in the name of religion. Even though no religion preaches such violence, these groups think that their faith is superior and, in this manner, hurt others.

This occurs when a group wants to separate from their state/country into another independent state. The Khalistan Movement in Punjab is one such example of this. This is separatism that can go into extremes of violence.

Groups that are dissatisfied with the current system of governance form terror groups to threaten the Government. One example of this is the Naxalites. They have carried out several attacks according to their plan.

This sort of attack takes place due to the sizeable socioeconomic disparity. The poor classes in dissatisfaction turn to terror cells to further their aims through violence.

India has faced the brunt of violent terrorism many times over the years. Thousands have died because of this. Despite the measures taken by the Government, many attacks still take place. Firmer and more stringent measures need to be taken to put an end to activities that cause widespread fear and panic among the nation’s people.

Long Essay on Terrorism in India 500 Words in English

Terrorism is an act of violence carried out to intimidate and create fear and panic amongst people. The agenda behind such actions can be political or simply mindless violence. India has seen its fair share of terror attacks over the years, and the Government has taken various stringent measures to stop this. There are around 100 terrorist cells in the nation, according to statistics. This is far too many and can cause great destruction.

India is a developing country. While terrorism is extremely harmful to any nation, a developing nation can take a hit that can set them back a few years. There are countless people who can lose their lives in bombings or firings. For those that survive, the attacks can leave a mark on people mentally or even handicap them. Neither is a minor consequence, and it is something that they have to carry for the rest of their lives. The panic and fear that spreads from such attacks restrict them in their daily living with its impact.

The tourism industry also suffers a great deal. Understandably, if a place is declared dangerous, tourists would not want to visit these places and would prefer staying safe and staying away. India, as a nation, gains a lot of revenue from the tourism industry. This particular industry taking a hit can have a massive impact on the economy as it will keep tourists and visitors away from the nation. Others that are already here would definitely return home.

Another economic impact that terrorism can have is the tanking of foreign investments. Sensibly no one would want to invest in a nation that is prone to terror attacks. Countries like that receive humanitarian help alone and none for development, which is understandable as the first priority is safety.

This means that there is a loss of life and property when it comes to terror attacks. But there is also the lasting impact that it takes on the economy. It also results in brain drain, and young people want to leave to other nations to secure their future and careers. This affects the industries that require doctors, bankers, engineers, lawyers, artists, and others.

One of the well-remembered terror attacks that left a deep mark was the 26/11 attack in Mumbai. Nariman House, Hotel Oberoi Trident, and Hotel Taj were taken over. Around 170 people were killed, and 300 or more were injured. Many brave officers and civilians gave their lives protecting others. Names like Tukaram Omble and Hemant Karkare are remembered when we talk about officers who stood in the face of fire so that others would be saved.

The Mumbai Train blasts took the lives of 210 and injured 715 others. Another deadly attack was the attack on the Parliament of India. This was especially frightening as the Parliament is central to how the nation runs as well as its future. There have been many serial attacks and bombings that have taken place. These spread more fear and terror as no one quite knows where or when they would happen.

Fortunately, all these attacks were put an end to, even though many sadly died to stop terrorists. The attacks on the now Union Territory of Jammu and Kashmir have been consistent over the years. There have been multiple invasions and attacks on the border. It has caused great strain between the neighboring countries, which adds to the tension caused by the two’s tumultuous history during independence. Many army men have lost their lives in these attacks.

Many have posthumously been awarded for their heroics and bravery. But even though we all value such men, it would be better if they hadn’t lost their lives at all. Terror attacks leave a lasting scar on the families of the victims. It is incredibly heartbreaking to know what the families go through after their loved ones pass away, even if they are proud of the bravery displayed. 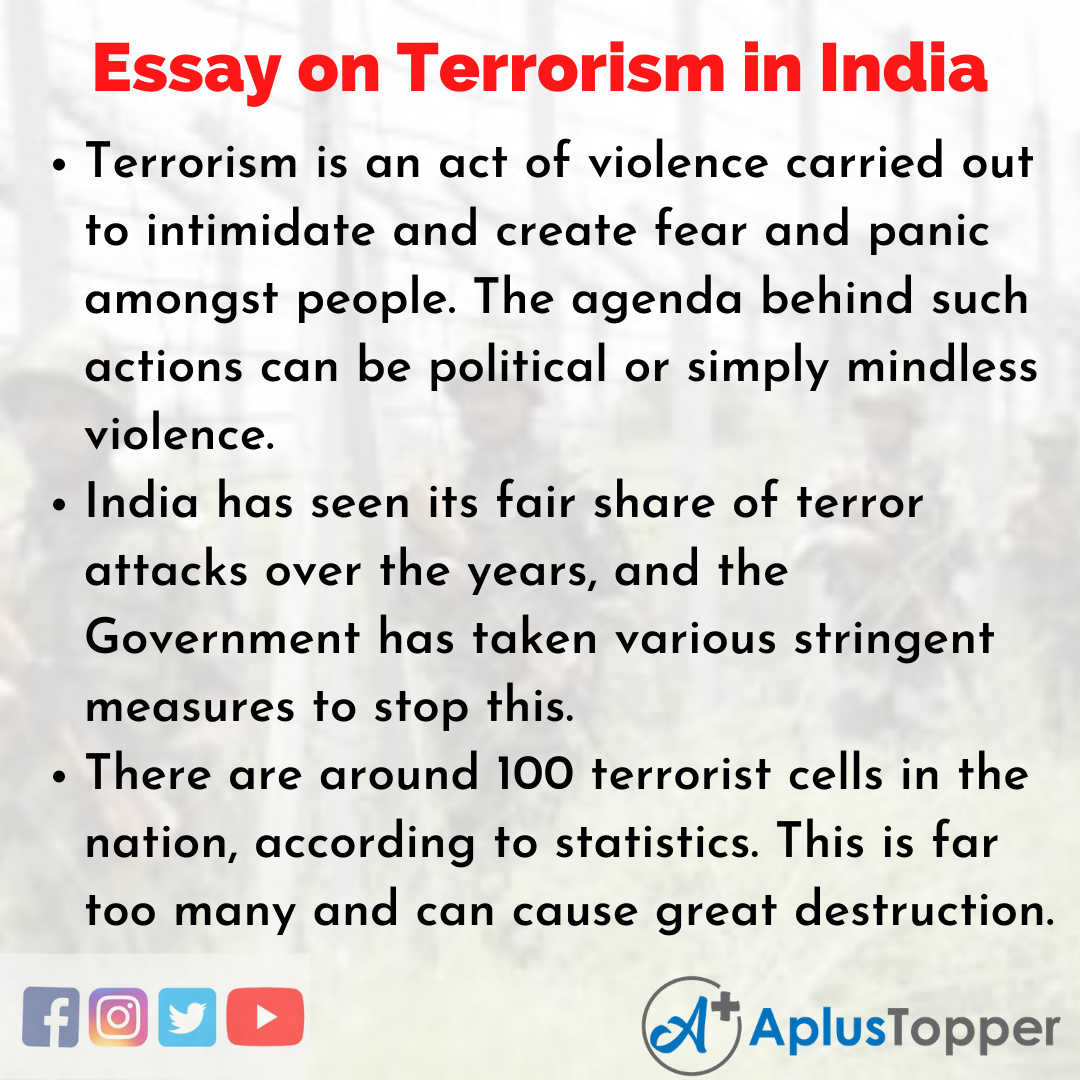 The Government has made various special agencies to tackle this threat. The aim is to locate movements indicating terrorist plans and to stop them before it happens. While we have made strides in preventing attacks and catching the terrorists when the attack begins, it is not enough to do just that. It is safer for all if this can be weeded out before there is a chance for an attack.

Terrorism is a real threat in today’s world. It is unexpected, and the common person has no real way to prepare for it. Therefore the Government must take charge of the situation and deal with it so that there are no more attacks and no lives are unnecessarily lost.