It is one of the cleanest cities across the entire state. There are several facilities available that ensure the cleanliness of the town. Besides, it is also popularly known for its mouth-watering cuisines, beautiful beaches and some religious places.

We are providing students with essay samples on a long essay of 500 words and a short essay of 150 words on the topic Surat for reference.

In terms of cleanliness, the Surat city holds one of the highest places in India. The transformation of Surat into a clean city started from as early as the early 19th century.

There are several measures taken up by the government of the city to ensure the cleanliness of the city constantly. Surat is also highly recognized for its different kinds of food, and so on.

The Gujarati cuisine in Surat is highly popular across the world. It includes cuisines like Locho, Khamani, Fafda, Vadas, and so on. Besides, many people in Surat mostly prefer late-night snacks. Few of the most famous places for Gujarati cuisines in Surat are Madhi Ni Khamni, Lashkari, etc. One more widely demanded cuisine present in Surat is the Undhiyu, which is cooked with the use of eight different vegetables.

Along with its cuisine, it is widely famous for its huge collection of silk sarees. Since Surat is also referred to as the textile city. There are several types of sarees present in Surat with different designs, quality, and fabrication, including the gajee, tanchoi, kinkhab, and so on. The flyovers present in this city are high in number.

There are emporiums situated in the city, including both private and government. Zari manufacturing is another factor which has increased in its popularity.

The people residing in Surat have the expertise and skills related to the field of arts and crafts. These normally have a unique style. There are numerous sets of tiny, ivory, wooden, and various other kinds of handicrafts present for sale.

One of the most popular places in Surat is the government emporium. That market that is popular in this city for buying decorative products or items is the Shanivari Market.

Apart from this, Surat is also known for being an incredible place that attracts a large number of people. It has numerous beautiful beaches, few of which are the Suvali, Dandi, and Dumas beaches are the most popular of them all.

Black sand can be seen in the Dumas beach, which is why it is referred to as a haunted beach. Dandi Beach has been popular since ancient times since the march of freedom originated from this particular place.

Few of the most important monuments of Surat include the Sardar Patel Museum, Jagdishchandra Bose Aquarium, Surat Castle, the Dutch Garden, and so on.

The 16th-century ancient monument developed by Khudawand Khan is referred to as the Surat Castle. The primary purpose for its construction is to ensure security to the entire city. It holds a vast historical background. Since it displaces parts of history, so it is renovated for the visitors or the tourist.

This place now represents the efforts and elegance. It is easily available for any visitors during day time. Next is the Sardar Patel Museum which is formed back in 1889.

Kolkata is the home to numerous types of aquarium that you can use for keeping around100 species. Besides, some of the other famous places that you must remember. It includes temples, adventure, and so on. 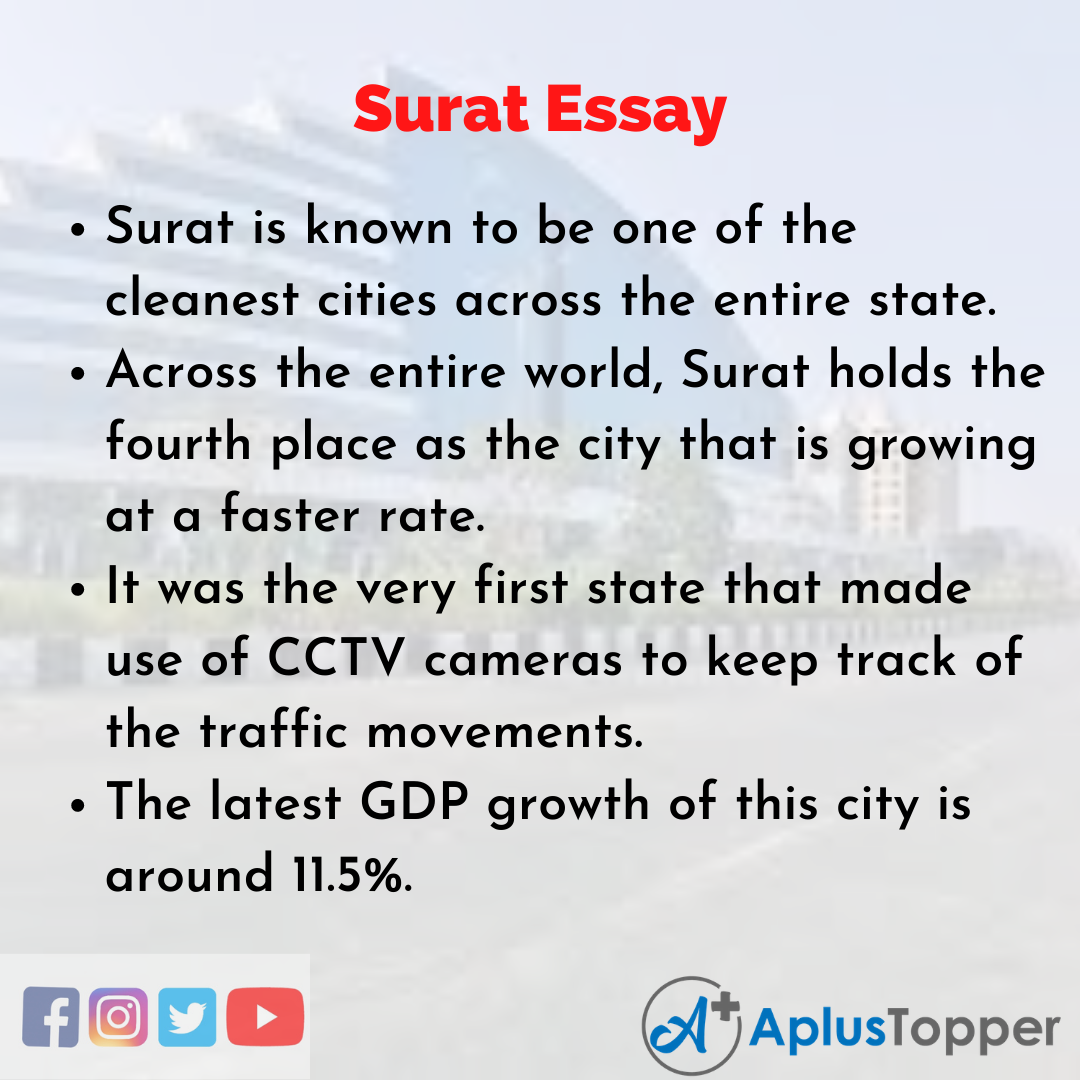 Surat is situated in Gujarat on the western part of India. It is one of the most glorious, lively and famous cities across India. The rate of population is increasing drastically in Surat because of a high number of immigrations.

The British landed in this city first. Besides, the businesses centre of the Portuguese and the Dutch eventually got established in Surat.

Surat was known to be a popular port in ancient times. Even at the current time. The rate of unemployment in Surat is very less and almost equal to zero since it is easier to acquire jobs in Surat because of the rapid development of numerous organizations in it.

10 Lines on Surat Essay in English

1. Surat is known to be one of the cleanest cities across the entire state.
2. Across the entire world, Surat holds the fourth place as the city that is growing at a faster rate.
3. It was the very first state that made use of CCTV cameras to keep track of the traffic movements.
4. The latest GDP growth of this city is around 11.5%.
5. In 2013, Surat received the award for the best city by the ASICS.
6. Surat is also popularly referred to as the city of flyovers.
7. The most popular and local dishes of Surat are Ghaari, Locho, etc.
8. Surat Railway Station received the award for being one of the cleanest.
9. This city is also widely known as the diamond city.
10. The richest municipality corporation across the nation is the S.M.C or the Surat Municipal Corporation. 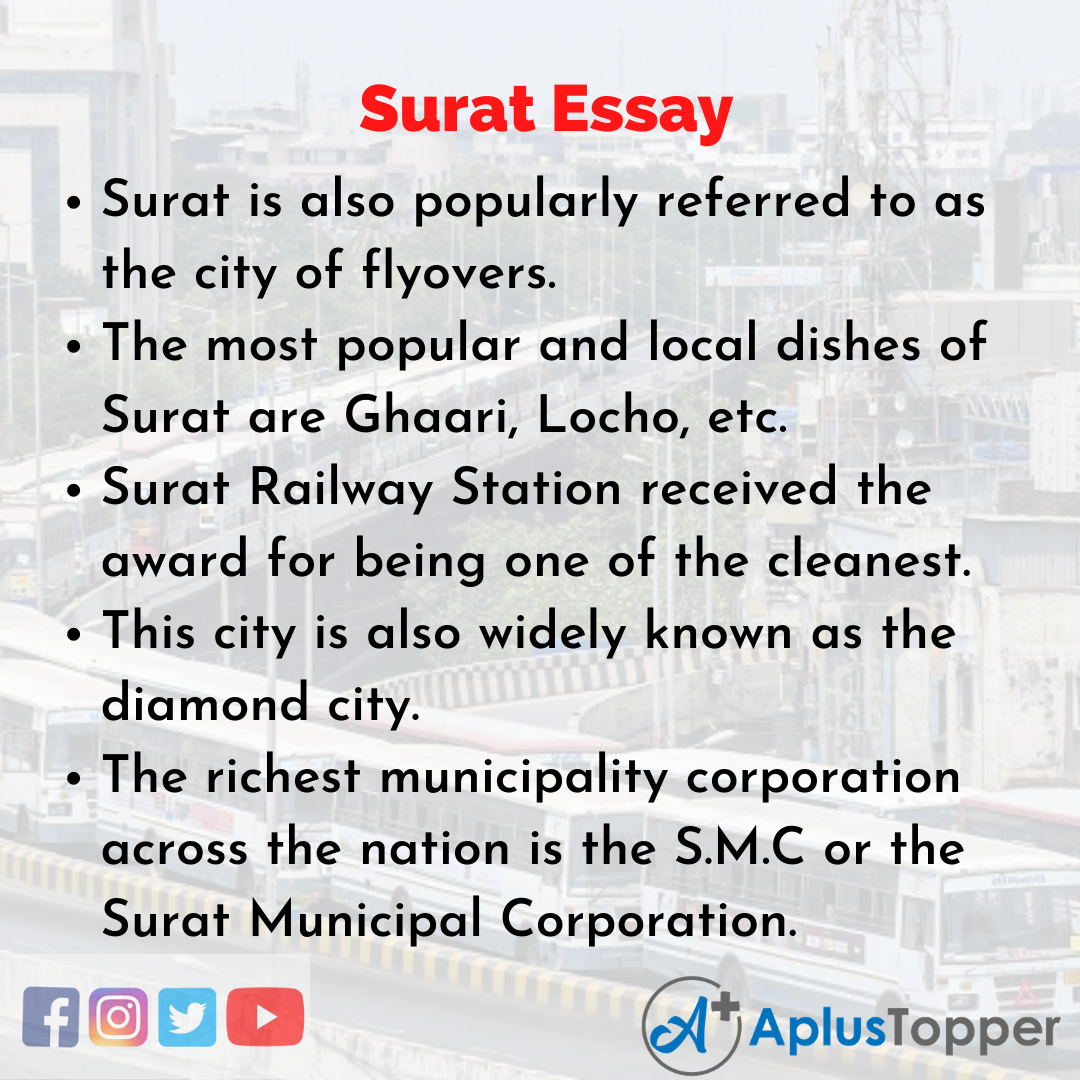 Question 1.
What is Surat popular for?

Answer:
Surat is quite popular due to its variety of cuisine. It includes SuratiLocho, Aloo Puri, Undhiyu, etc.

Question 2.
When is it known to be a suitable time to visit Surat?

Answer:
It is best to visit Surat from October to March due to the pleasant temperature during the mild winters.

Question 3.
What are the places that are popular in Surat?

Question 4.
What was Surat previously known as?

Answer:
Surat was previously referred to as Suryapur.