Essay on Stereotype: Stereotype is an extreme generalisation of belief about a particular group o community of people. It is not only a preconceived notion about the certain group but a degree of expectation from the individuals of that group. These expectations are not only centred around a particular belief but also their attitude and personality.

We are providing students with essay samples on a long essay of 500 words and a short essay of 150 words on the topic Stereotype.

A stereotype is defined as a preconceived notion about a certain group or community of people. It is an extreme generalised view of their beliefs and attitude. Stereotype seldom helps on to understand the character and culture of a group. It is mostly a negative generalisation. Stereotypes are often inaccurate and create misconceptions.

Stereotypes can be divided into:

Implicit stereotypes: Implicit stereotypes are the ones that a person holds subconsciously. One is not aware of the unconscious bias that one has regarding different communities. According to social psychology, a stereotype is a widely recognised belief about different types and variations of particular groups. These concepts are often far from reality. Stereotypes are often related to the deep-rooted social psychology of the people.

The relation between stereotype, prejudice and discrimination:

The relation between cognitive and social functions:

A genuine belief of many people was that stereotypes are mostly beliefs of the rich, aristocratic authoritarians. However, this misconception has been dissolved as it has now proven itself as a common social impression.

Cognitive Functions: Stereotypes are not always negative. They help to form a collective idea about a certain group of people. It helps to classify into systematised information broadly.

Though there is a lot of explaining how all stereotypes are not bad, stereotypes, on the whole, are mostly wrong and create unnecessary misconceptions that are also hurtful. Hence, we must open our minds and oppose these stereotypes. 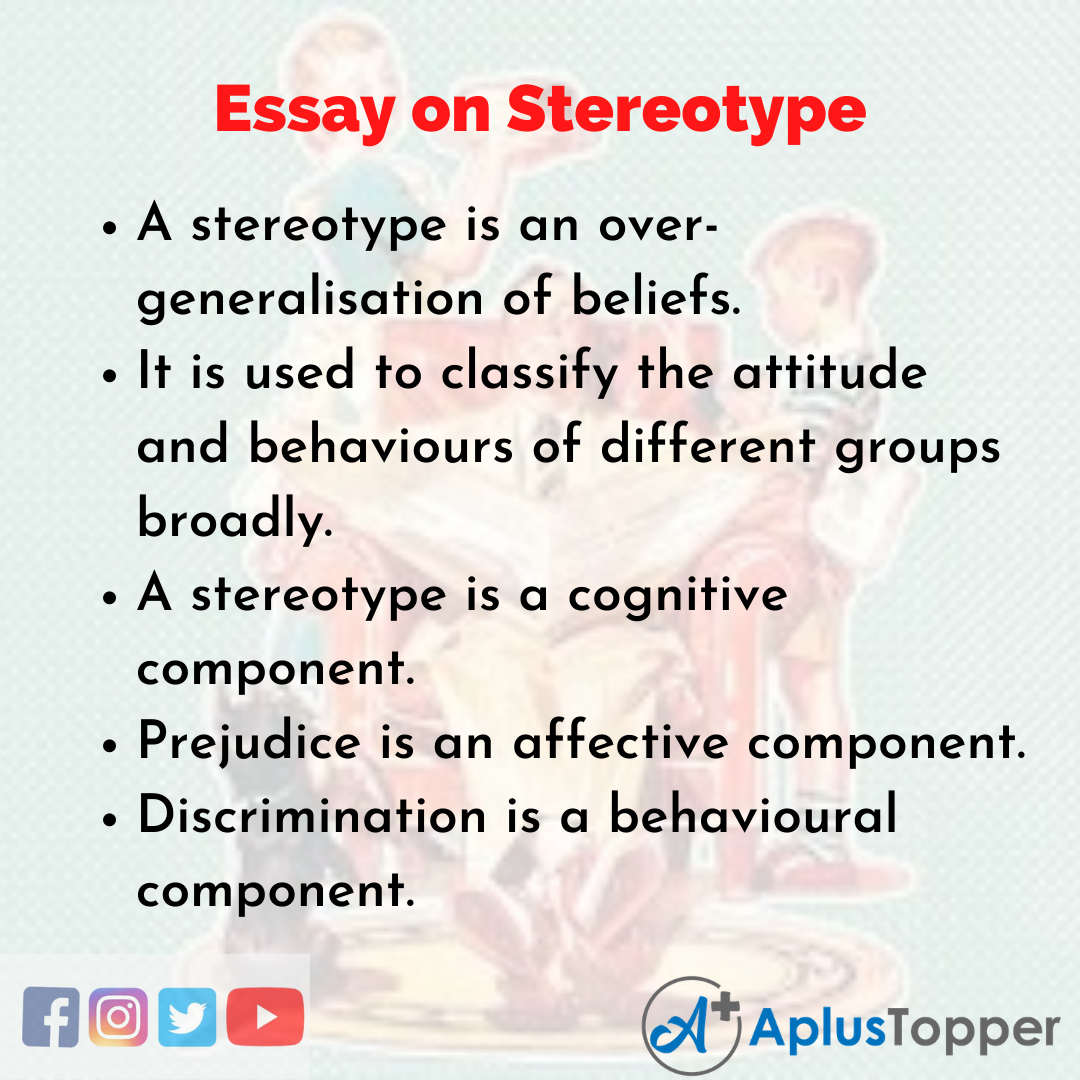 Stereotypes are generalised beliefs about certain groups and communities. These are some preconceived notions that are often faulty and create several misconceptions. They are not only misleading but are also hurtful to the individuals of the group who do not identify with the beliefs.

Some common stereotypes are:

It is not morally correct to over generalise people as most of the stereotypes end to be misleading and faulty. Hence, we must teach ourselves to be more open-minded and aware of our surroundings.

10 Lines on Stereotype in English Question 1.
What are explicit stereotypes?

Answer:
Explicit stereotypes are the preconceived impressions which one is aware of holding. One uses them to judge other people based on it.

Question 2.
What are the implicit stereotypes?

Answer:
Implicit stereotypes are the ones that people are unaware of holding. These are unconscious bias.

Answer:
Stereotypes are always bad as they are faulty, misleading and hurtful towards individuals who do not identify with the pre-determined characteristics.