Essay on Sri Aurobindo: The Indian culture is rich in heritage and tradition. It has a lifelong history of great men who were born, had walked, and breathed their last breath in this country. Sri Aurobindo Ghosh is one of them. Sri Aurobindo was one of the most eminent and learned gurus of his times; he was a spiritualist. He is one of India’s most respected and renowned jewels.

The topic of the life and achievements of Sri Aurobindo Ghosh is common among students for essay writing. For such purposes, we have compiled a set of reference essays, which the students can check out.

Aurobindo Ghosh was one of the imminent scholars of Indian origin. He was a poet, a guru, a spiritualist, and a yogi. He was also dedicated to India’s freedom from the British Rule; he actively participated in the Indian National Movement. Later in his life, Aurobindo Ghosh dedicated himself to spiritual evolution and became a religious leader himself.

Aurobindo Ghosh was born in the Kolkata-based Bengali Family to Krishna Dhun Ghosh and Swarnalata Devi. Though a part of an ardent Bengal family, he grew up in a westernized culture, which his father had instilled in his house. He had his schooling done in the Medium English school of Loreto House in Darjeeling. For his training to join the ICS, he soon was sent to England. There, in England, under the mentorship Reverend W.H.Drewett. He was also enrolled in the Manchester Grammar School. While in England, Aurobindowas exposed to many cultures and learning fields under the teaching excellence of Drewett.

Having come under the leadership of Drewett, Aurobindo became well versed in the languages of Greek, French, and Latin. He also started developing his own opinions on matters such as religion, spiritualism, and philosophy. He later enrolled in the King’s College for the completion of his ICS examination; he, however, was not interested in the degree at all. During the late 1890s, he returned to India from England.

Back in India, he settled in Baroda. He kept traveling between Baroda and Calcutta during this time. At Baroda, he became well-versed in the Sanskrit and the Bengali languages. During this period of his life, he increasingly started to involve himself in politics. His interest in rebellion and revolutionary politics sparked up after he moved to and finally settled in Calcutta post-partition of Bengal. Aurobindo Ghosh indulged himself in innovative ideas and resistance against the British Rule in the country. His political ideology was based on non-cooperation and passive resistance; he was secretly involved in revolutionary activity and prepared for open rebellion.

Owing to his extremist political and activist opinions against the British Rule, Aurobindo was put into prison twice. After his final release from behind bars, he began two publishings – Karmayogin in English and Dharma in Bengali. After this brief period, he migrated to Pondicherry. At this point in life, he decided to convert himself from an extremist political ideology to a spiritualist. His spiritual journey began when he felt he was being visited and blessed by Swami Vivekananda.

Sri Aurobindo soon involved himself in Integral Yoga and mediation. His notable books are The Synthesis of Yoga, The Life Divine, and Arya. He firmly believed in the superiority of Yoga and how meditation and Yoga can lead to links between human nature and the Divine Force. Sri Aurobindo also developed an affinity for Western Philosophical Culture. Sri Aurobindo Ghosh is one of the most celebrated and well-known personalities to have traversed the Indian land. He spent his early years traveling between Calcutta, England, Baroda, and Pondicherry. During the initial years of his life, he was exposed to the great tradition of Western Culture. He was well trained in a variety of languages and many varied fields. Owing to his masterful mentorship and parenting, he was an opinionated individual.

In his youth, he was much involved in politics and political revolution. Later, after having moved to Pondicherry, he moved his focus from political to spiritualism. In his later years of life, he was also involved in Philosophy and philosophical preachings. Sri Aurobindo is one of the greatest men to have been born and bred in India. He is also the author of several enlightening books in Literature. He was a spiritual philosopher, preacher, and a mystic follower. 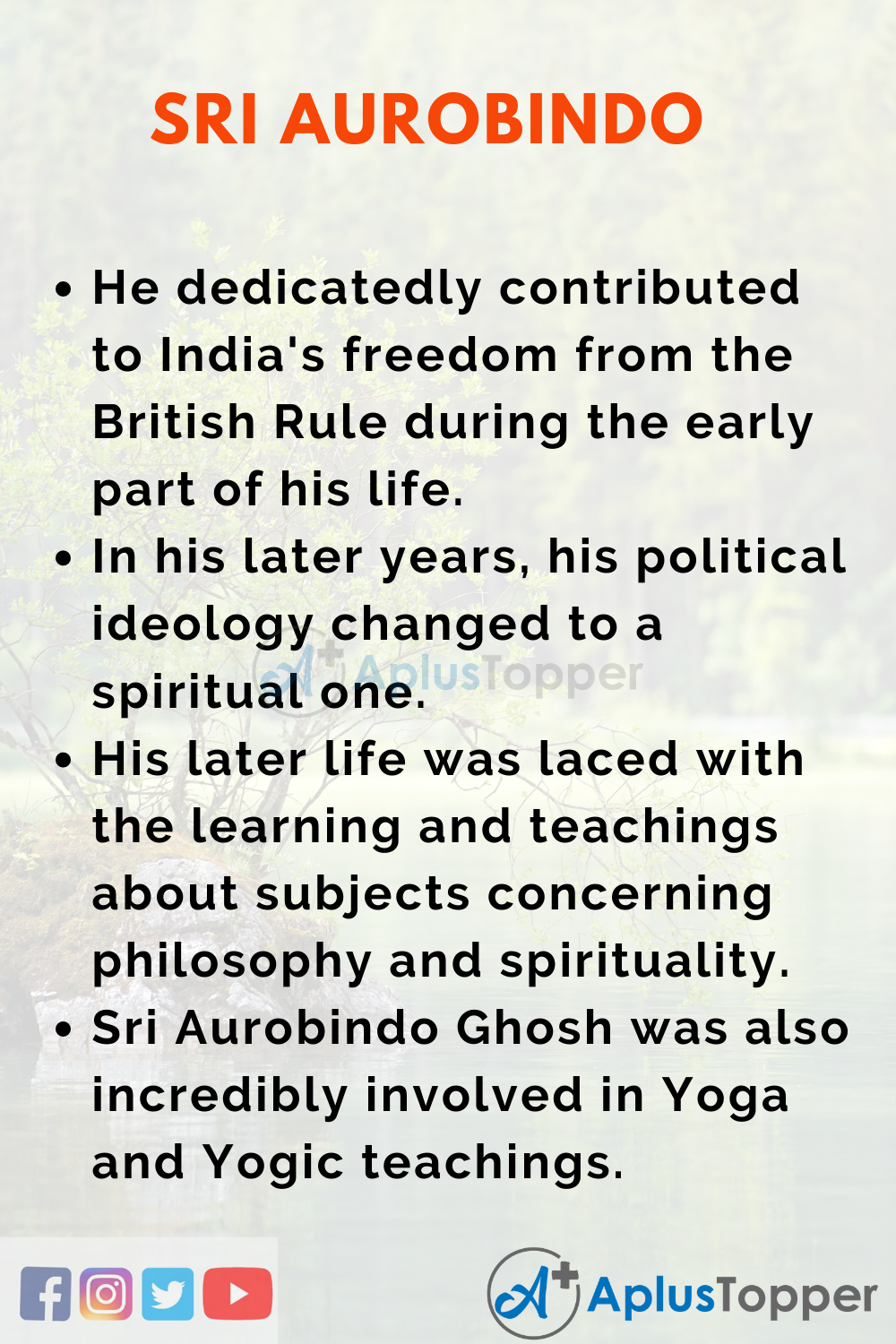 Answer:
Sri Aurobindo Ghosh was known for his resistive political ideologies against the British Raj in India and his philosophy. The philosophy of Aurobindo encircled Integral Yoga, Integral psychology, Supermind, and Intermediate zone.

Question 2.
What was Sri Aurobindo’s view on learning and education?

Answer:
Sri Aurobindo believed in all-round and vocational education of a human individual. He thought training should cover all aspects of life, including beauty, physical knowledge, psychic intellect, and theoretical knowledge.

Question 3.
When did Sri Aurobindo convert from politics to philosophy?

Answer:
During his stay in Pondicherry, Sri Aurobindo converted from politics to philosophy. During this time, he also involved himself in spiritual meditation and Yoga.