Essay on Solapur: Solapur, currently known as Sholapur, is a small city located in Maharashtra’s south-western region in India. It is close to the border of Karnataka. It is one of the most highly polluted cities in Maharashtra.

The city is significantly polluted due to human activities like dumping chemical effluents from textile industries. Due to the use of many vehicles, there is smog present during the day frequently.

We provide children and students with essays and an extended essay of 500 words and short writing of 150 words on the topic “Solapur” for reference.

Solapur or Sholapur is a small city of south-western Maharashtra in India. Close to the border of Karnataka, Solapur is one of the most polluted cities in Maharashtra.

Solapur is located on rail routes, significant highways between Mumbai, Pune, Bangalore, and Hyderabad. The branch line to cities like Bijapur and Gadag, which takes to Karnataka’s neighbouring state, also leads to Solapur.

Solapur is the home to numerous textile industries that make the city booming with job opportunities, making it incredibly polluted. The chemical wastes and effluents produced by the textile industries make the city polluted to dangerous levels. Many vehicles also generate a tremendous amount of pollution due to the burning of diesel fuel. Hence, the city is frequently covered with smog.

Solapur also houses several sugar-producing factories. These factories also create many toxic wastes due to processing heavy textiles. The pollution levels are so high that people have a difficult time leading their daily lives.

Solapur is located on the bank of the river Bhima. There is a Dam to provide sufficient water supply to the people throughout the year.

The Maharashtra government and other Non-governmental organizations have taken up the initiative of making the city a better place. The Maharashtra Pollution Control Board (MPCB) has taken up the cause to make the city habitable. They are aware of the harm the industries are doing to the environment and have launched several programs to curb pollution.

The MPCB has launched a ‘Go Green’ initiative that aims to plant more trees in the city and increase the tree-covering area. They also make this program a success by taking local, nature-loving people who volunteer to plant trees.

The Maharashtra government has decided to introduce compressed natural gas in Solapur. The availability of CNG will make a shift for the positive. Public transports can use CNG as a renewable fuel since it creates far less pollution than burning diesel. The organization will make CNG available to various parts of Maharashtra, too, except Solapur. Chincholi will also get a supply of CNG.

Solapur is famous for its native Solapuri Towels. They are ever-evolving according to the needs of the market. Their bed-sheets also have a good reputation.

The Solapur Municipal Corporation is the civic administration of the city. They oversee the engineering work, health, sanitation, administration, water supply, and taxation. Hence, they have the responsibility of making the city less polluted.

The citizens of Solapur have flooded in with their help. They have launched an initiative called ‘My Dream City.’ It aims to understand the dreams and aspirations of the people of Solapur.

Solapur is famous for its productions like beedi, towels, Solapuri Chadars, etc. Solapur used to hold the record for having the world’s second-largest and Asia’s largest spinning mill. They also have the first waste to energy electric power plant in Maharashtra in Solapur.

Hence, Solapur is a place booming with industrial opportunities. It can become a better place with the support of the government and the local people. Together, they can make Solapur a gem of Maharashtra again. 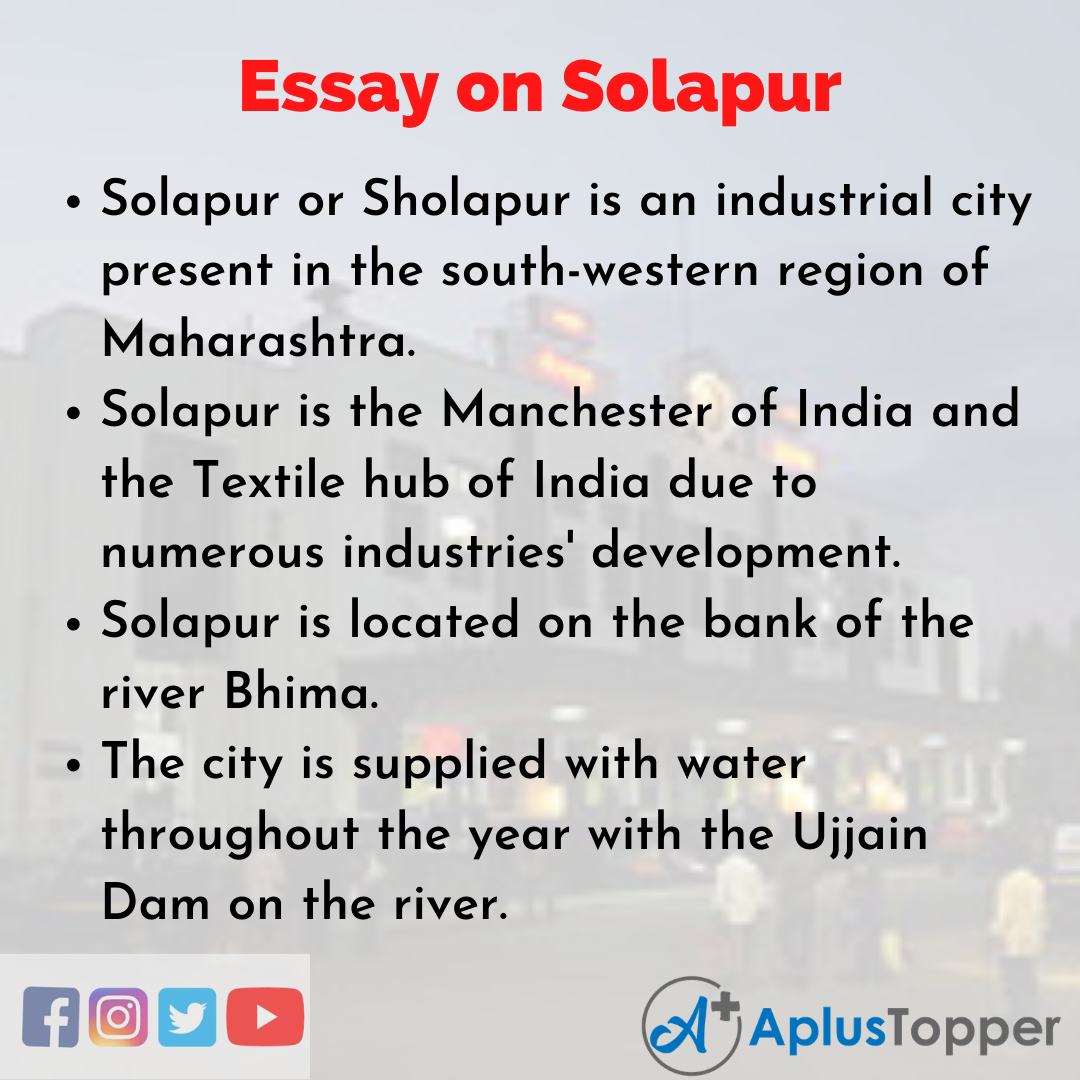 Solapur is an industrial city present in the south-western region of Maharashtra. It is located on major highway routes between Mumbai, Pune, Hyderabad, and Bangalore. There are also branch lines leading to some cities in Karnataka.

Solapur is also called the Manchester of India and the Textile hub of India. It is the central point of growth of a variety of textile industries, sugarcane industries, etc. Solapuri towels and bedspreads are famous across India. They produce excellent quality textile materials for sale. Due to the growth of numerous industries, Solapur is the most polluted city in Maharashtra. There are frequent smog and air pollution in the environment.

With the Maharashtra government’s help and the local people, the city will become much less polluted. They have taken several steps to reduce pollution in the city. Technical advancements in the city make it a populous hub in Maharashtra. Get ready to be amazed by their textile industries when you visit Solapur.

10 Lines on Solapur Essay in English

1. Solapur or Sholapur is an industrial city present in the south-western region of Maharashtra.
2. Solapur is the Manchester of India and the Textile hub of India due to numerous industries’ development.
3. Solapur is located on the bank of the river Bhima.
4. The city is supplied with water throughout the year with the Ujjain Dam on the river.
5. Solapur is one of the most polluted cities in Maharashtra.
6. Solapur is famous for industries that produce beedi, towels, Solapuri Chadars, garments, etc.
7. Solapur is also the gateway from Maharashtra to Karnataka.
8. It is located on major highway routes between Mumbai, Pune, Hyderabad, and Bangalore.
9. The government has decided to introduce compressed natural gas in Solapur to reduce pollution.
10. The local people have helped the government in their endeavour to make Solapur less polluted. 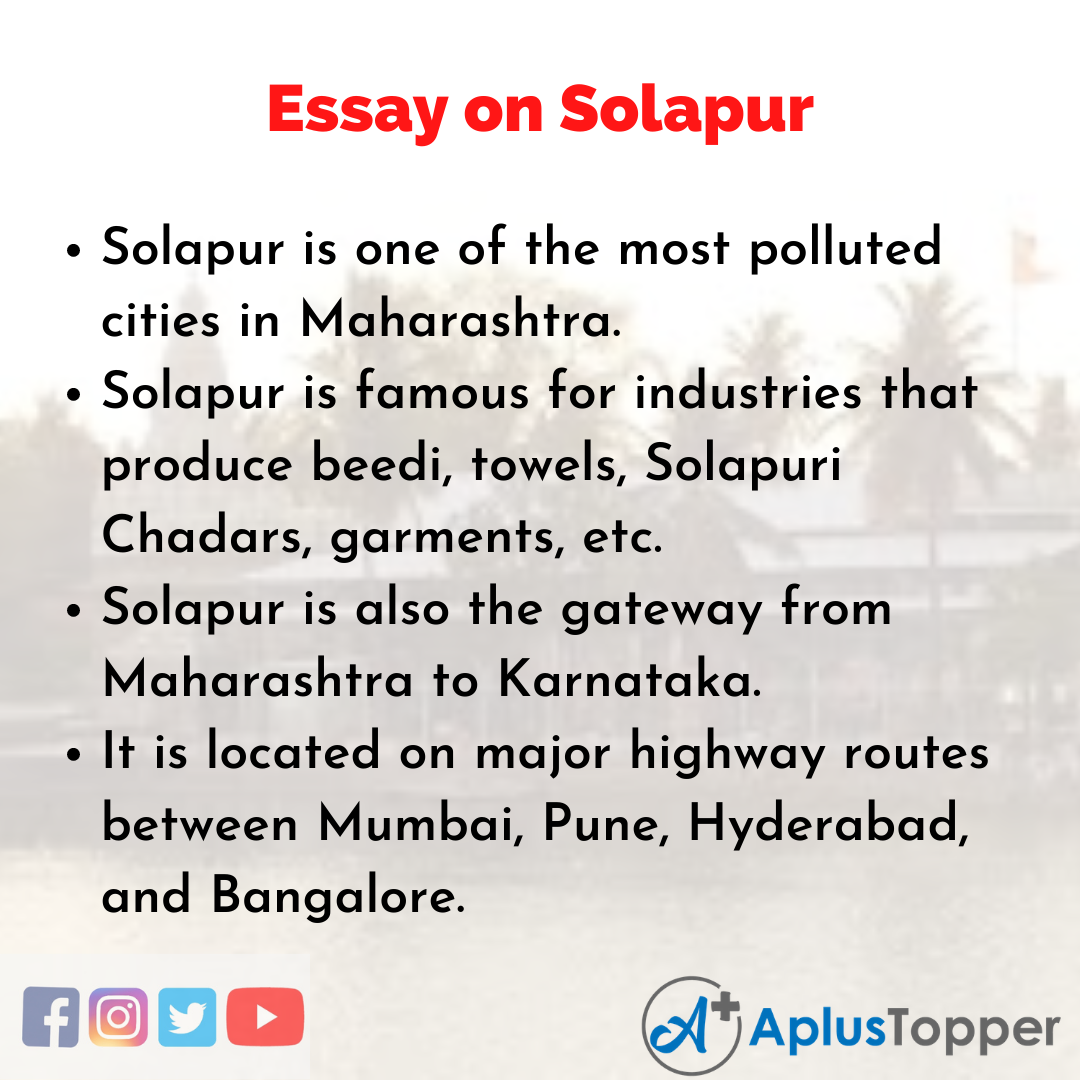 Question 1.
Where is Solapur located?

Answer:
Solapur is located in the south-western part of Maharashtra. It is on the route of several highways that connect essential cities in Karnataka. The city is located near the banks of the Bhima river.

Question 2.
What is the environmental condition of Solapur?

Answer:
Solapur is the most polluted city in Maharashtra. There are high amounts of air pollutants in the air and frequent appearances of smog.

Question 3.
Why is Solapur called the Manchester of India?

Answer:
Solapur’s government has launched projects like the ‘Go Green’ project and the CNG project to reduce pollution. The locals also help the authorities to plant trees around the city.