Essay on Smart City: Smart cities are defined as the concept of rapid urbanization and its contribution to the development and improvement of socio-economic activities of the society.

The idea of smart cities requires some specific elements and highlights some models of implemented smart solutions in the world.

We provide students with essay samples on a long essay of 500 words and a short essay of 150 words on Smart City in English.

The concept of a smart city aims to investigate the implications of smart solutions for sustainable development and smart solutions in the city. These solutions mainly concentrate on the core area of the city’s administration, education, health, transportation etc.

The idea of a smart city has been introduced to highlight the importance of Information and Communication Technologies ( ICT’s) in the past 20 years for the quantitative and qualitative analysis of industrialization. In literal terms, the smart city is used to specify a city’s ability to cater to the needs of citizens. Development of city and quality of life are profoundly influenced by the core systems of a city: transport, education, and government services; public safety and health. Research has focused on these four areas, which identity having high priority.

The literature review highlights that various criteria referring to improve life in a city are mentioned in connection to the terms of a smart city. The most important area for starting to transform a city into a smart one in the system of communication; thus, this area prioritizes the use of modern transport technologies. Smart transformation system works as a highway between the development of city and modern technologies.

The term smart city is also used in the literature regarding the education of its citizen. Therefore, a smart city has smart inhabitants in terms of its educational criterion. The intelligent system represents the future processes of education. This system will affect how the information is received, used, understand, and learned by users. In other, the literature the term smart city is also referred to the relation between the city’s governance or public administration and its citizen.  Good governance is a communication for the citizens, e.g. “ e-governance” or “ e- democracy”.

The health system is like a good solution for a smart city snd this implies to use modern technologies to better the results. The smart health system ensures timely diagnosis thus improving the life of the patients. The concept of the ubiquitous city has been developed into huge international research. It is also known a U-city . a model of a smart city is based on the usage of computer systems to exchange data such as cloud computing, open data etc.

The term smart city has attracted a lot of attention in these recent years. Since the end of the last century, many cities have initiated smart city planning. The first step for the establishment of the smart city is based on the physical telecommunication network infrastructure. The second layer constitutes applications that improve operation in the city like traffic control, etc., the third is based on connectivity and unity of all.

There are a lot of advantages to this new system: energy and other natural resources are spent more efficiently, and the tasks of synchronization are much easier to accomplish. We are now able to identify a lot of smart city in different levels of development, and this concept can be used to define urbanization based on modern technologies. 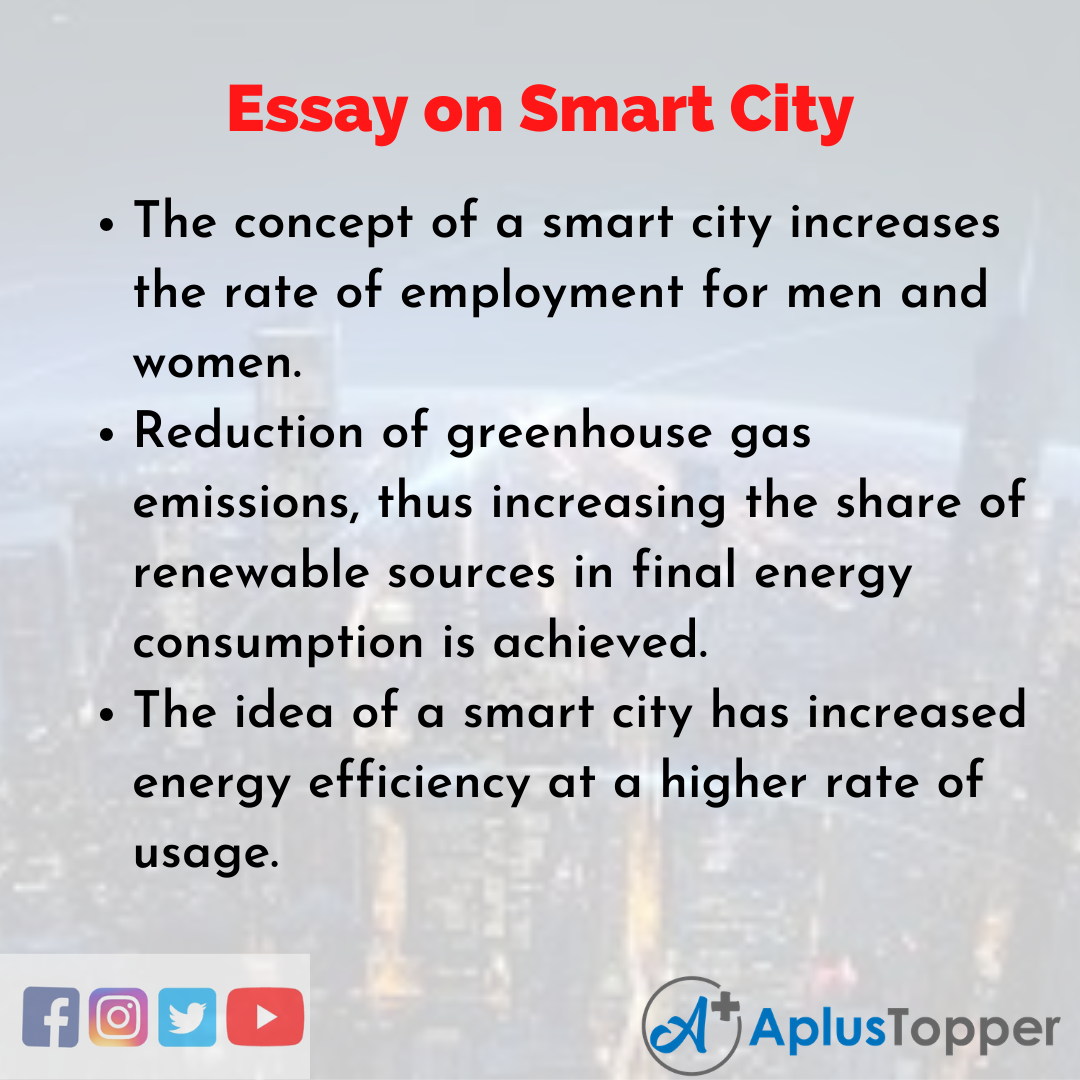 The useful definition of a smart city is when investments in human and social capital and traditional and modern infrastructure fuel sustainable economic growth and high quality of life, with a wise management of natural resources, through the participatory government. The idea of the smart city includes a new model of a sustainable economy based on more efficient use of communication solutions, transportation, public administration and natural resources.

The analysis of the smart city highlights the universe of smart applications of technology and infrastructure, which in turn are empowering citizens in innovative ventures. The strong concept is that a smart city is a strategy and an objective for every urban area and in some parts of the world is a reality. All the cities which implemented the concept of smart solutions had in view to improve the everyday life of citizens.

10 Lines on Smart City in English 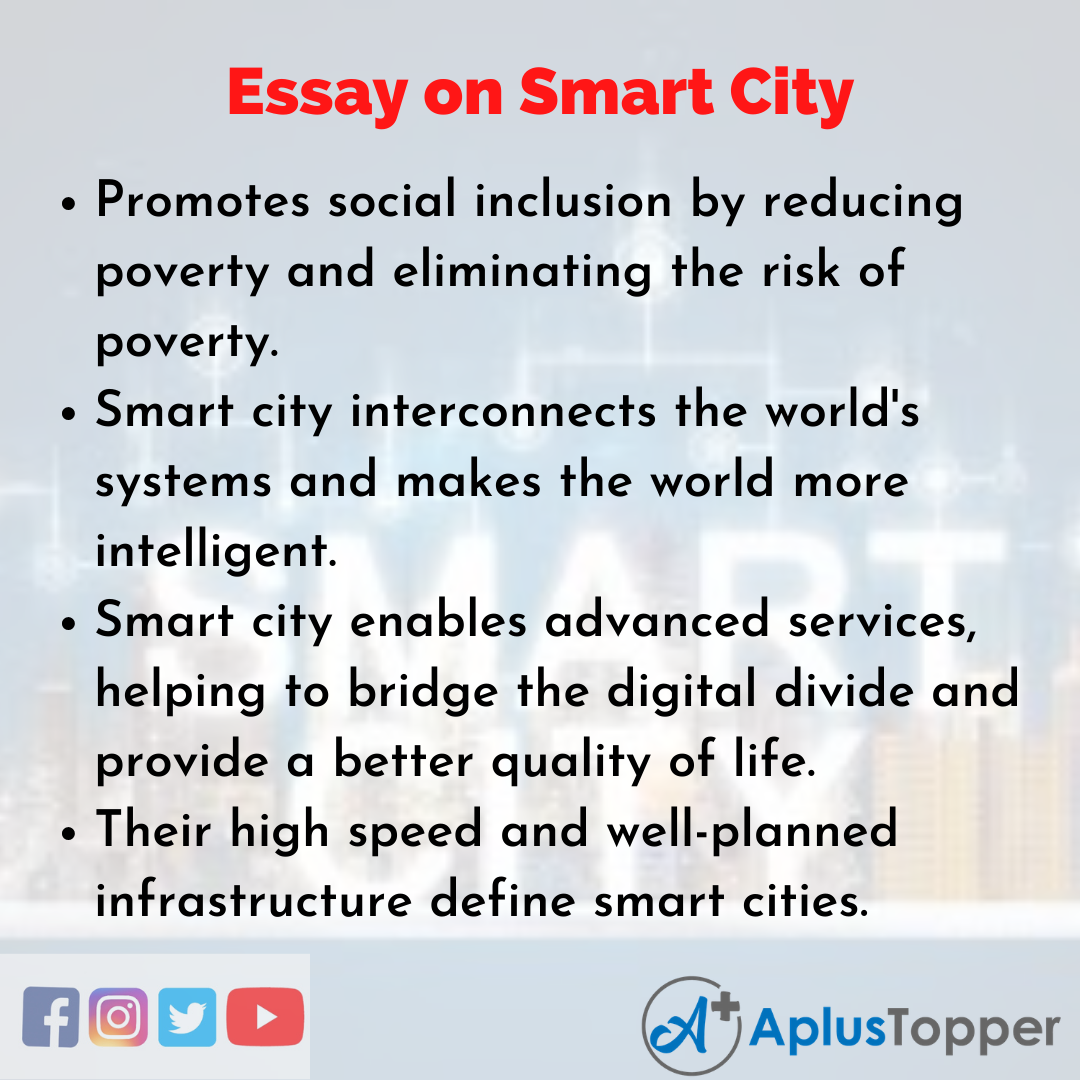 Question 1.
What is a Smart City?

Answer:
Smart cities are defined as the concept of rapid urbanization and its contribution to the development and improvement of socio-economic activities of the society

Question 2.
How is Smart City helpful?

Answer:
The concept of a smart city increases the rate of employment for men and women. It has increased investments and stimulated research, development and innovation of new indicators.

Question 3.
How can Smart City be created?

Answer:
It is essential to develop a city to have a strategy for a smarter city. This strategy will help to determine where and when to invest, will articulate key milestones and paybacks on investment and can help define an optimization calendar across the system.

Question 4.
What are the important criteria for a smart city?

Answer:
Smart city promotes social inclusion by reducing poverty and eliminating the risk of poverty. It interconnects the world’s systems and makes the world more intelligent.