Essay on Secularism: Secularism means believing in a system that rejects the concept of religion. It also assumes that public education and state affairs should be religion-less. It is essential for the democratic nations to be secular in order to avoid any state of a hassle as in many theocratic societies, it is common for the law to be created in favor of the people following the majority religion. Keeping religion out of the state and having no segregation of facilities depending on one’s religion is an act of secularism. India is a secular country, and therefore, we have compiled some long and short essays on Secularism for the use of the readers.

Secularism is one of the pillars of democracy because it implies expanding the principles of individualism and liberalism. India had no organized Muslim or Hindu institutions, unlike the church for the Christians. In the medieval era, movements like the Bhakti Movement and the Sufi Movement had a tremendous impact on bringing the communities closer.

There were many contributors to the composite culture that played a significant role in its development like Guru Nanak, Khwaja Moinuddin Chisti, Dadu, Baba Farid, Mira Bai, and many others. The landmark of a secular nation is the spirit of coexistence and tolerance, for example, the “Religious Toleration” of Ashoka. Sulh-i-Kul, which means peace with all and Din-i-Illahi, which means divine faith was imbibed with the spirit of secularism.

In India, people like Dr. Rajendra Prasad paid tribute to the Indian eclecticism, which did not allow the western concept to crawl into the Constitution. The concept of secularism has a lot of benefits, as a person can truly get to know themselves better and have an identity. He gets to choose whether he wants to have a religion or not without feeling pressured from any community, and one can enjoy religious freedom and freedom of speech.

The main motive behind introducing secularism in India was to make sure that all the communities could exist in harmony and peace. People who did not want to follow a particular religion would also be living in the country peacefully.

The fair execution of secularism is not an easy job, and leaders of independent India have struggled hard to achieve it. Sadly enough, there are riots being held now and then to take down the concept of secularism to display the powers of the community and eradicate the other community. Though the government and the forces try to unite and work against it, it is not always successful.

In general, secularism is a beautiful concept, and the youths of the nation must be encouraged to practice it for peaceful coexistence. The ideology has to be recognized and implemented with equal effort and grace, as printed in books. People should study secularism and preach others, understand the pros and cons, and strive to have a better life and a better future. 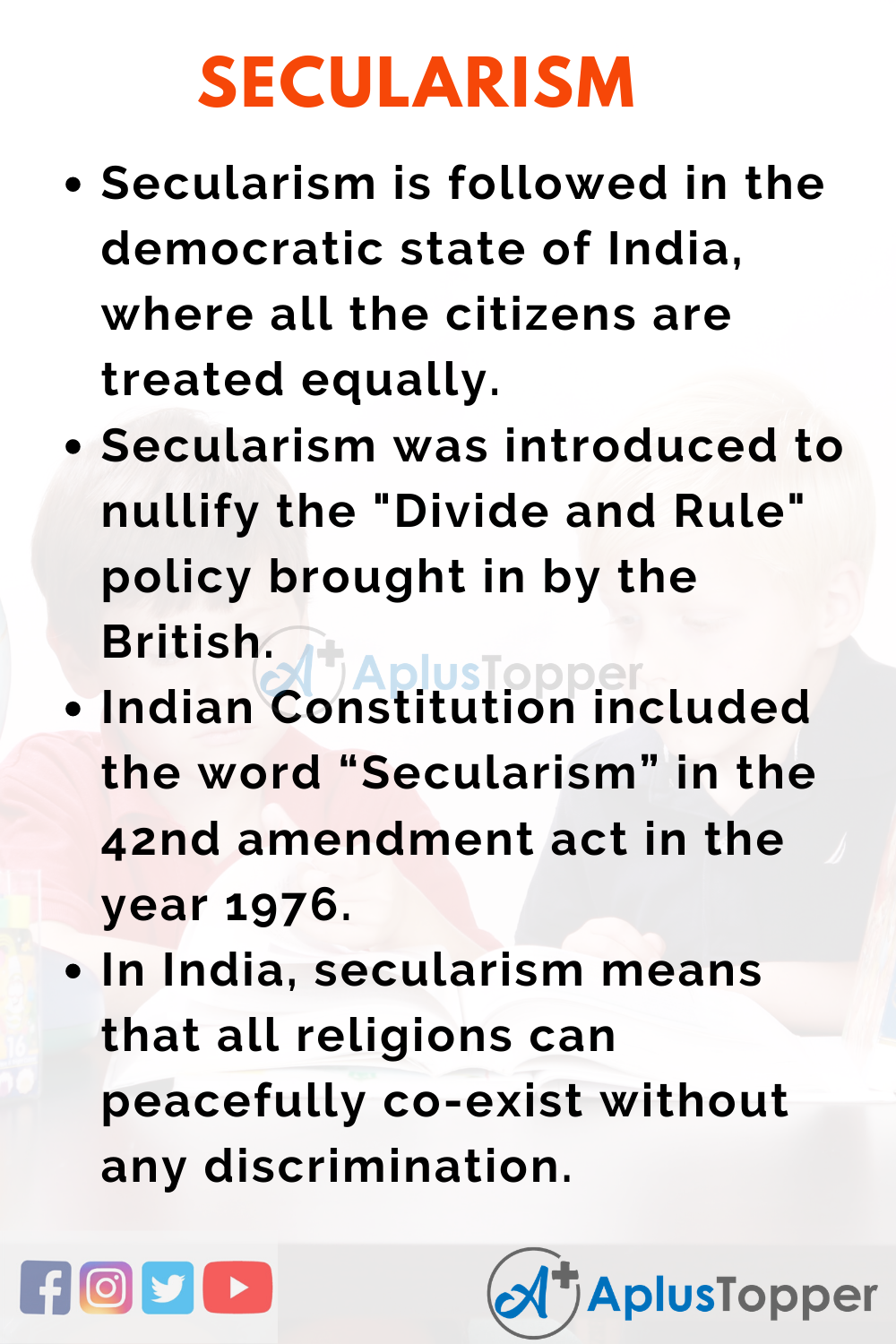 The word “secular” means being “separate’ and having no religious base. Secularism means keeping religion out of the social, economic, political, and cultural aspects of life. A democratic nation needs to be secular for the citizens to have some freedoms like religious freedom, freedom of speech, and decision making.

Secularism was introduced to the Indian Constitution in the year 1976 to maintain a peaceful harmony amongst its citizens and to treat them equally in the eyes of the law. Though secularism is a peaceful concept, the actual scenario is not always that. There are religious riots to cause a disturbance between two religions to gain power. Secularism is an ideology that the youths should be motivated about and follow.

10 Lines on the topic of Secularism in English 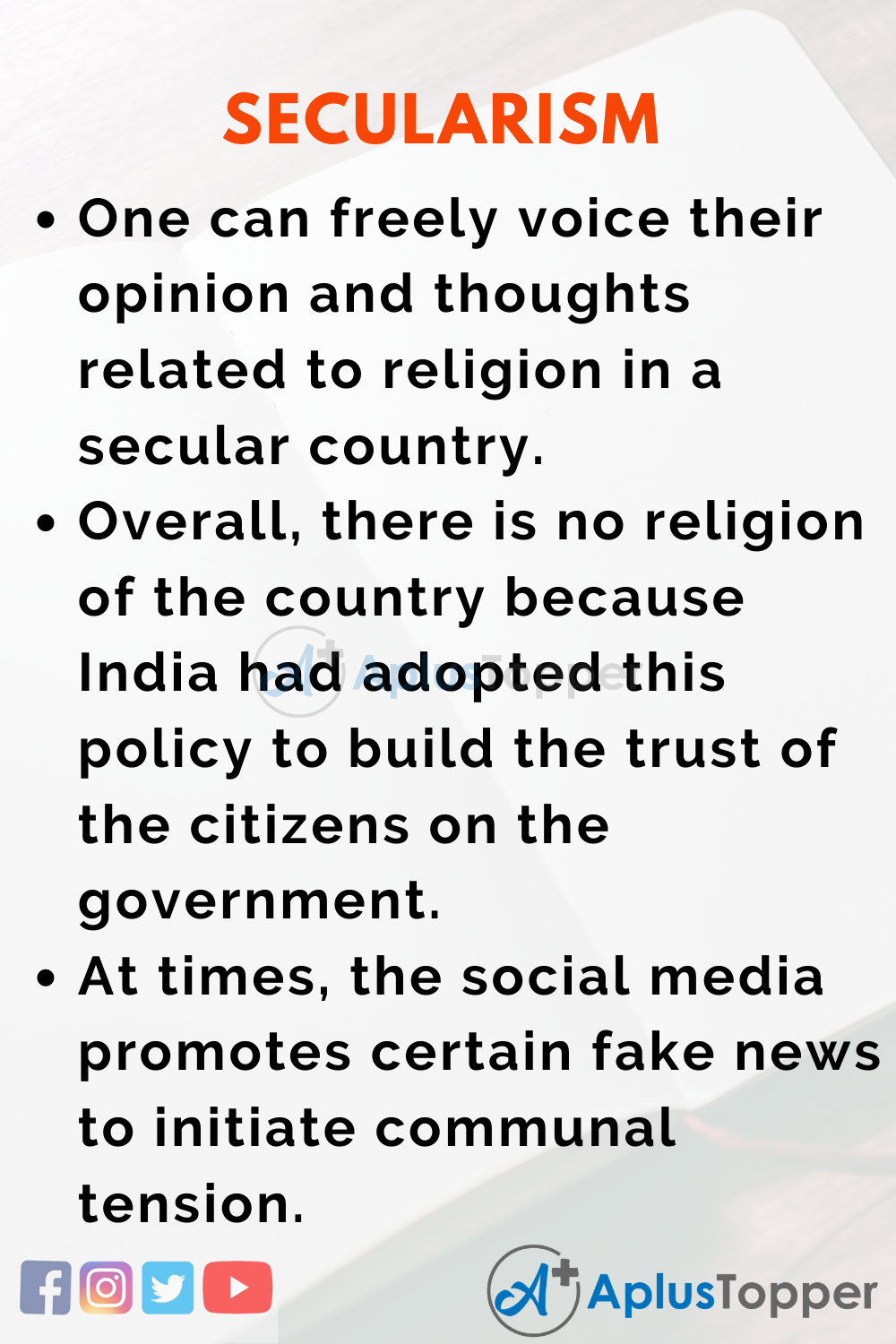 Question 1.
Is India a secular country?

Question 2.
What are the various kinds of secularism?

Question 3.
What is the importance of Secularism?

Answer:
Secularism is essential because it lets people choose what they want to follow and not be judged or compelled by any community.