Essay on Section 377 of Indian Penal Code: Section 77 of the Indian Penal code was introduced in 1861 by British colonial rule. According to section 377, sexual activities between the same gender are considered illegal. But in the year 2018, on September 6th, this act was revoked by the Supreme Court which means gay sex is now allowed in private. It is because of the Naz Foundation that put some light on this act and proving that homogeneous sex is not a crime. In this essay, we will know more about Section 377.

Section 377 was introduced by the British colonial rulers in the year 1864. This act states that homogenous sex or intercourse activities between the same sex are illegal and prohibited. For a long time, this act was followed by our government but many people started opposing this act. Many NGOs and foundations held campaigns and rallies to normalize gay sex.

In the present scenario, many people consider homogenous sex and intercourse as taboo. Even though it has been scientifically proven that it’s all about hormonal changes and it’s completely normal to have love and affection towards the same sex. People don’t have to feel uncomfortable and should support them as they are also mere human beings with the same feelings and love. This kind of person requires love and support from other people to feel accepted in society.

Before the act was revoked, many people hid their real feelings and also hid the fact that they are gay. It is because people won’t understand or society would avoid them, thus making them feel very uncomfortable and unmotivated. But when the ban was uplifted, many gay people came forward and revealed their true self. As the ban was uplifted, gay sex became legal and people started feeling confident and live their life happily by making confident choices.

It was because of the help and support of the NGOs and foundations like Naz foundation that the ban has been uplifted. The foundation focused on putting some limelight on this act and make it an important topic in the eyes of the court. Many other foundations joined them on this agenda, helping them gain the support of many people. With the help of campaigns and acts, they conveyed the information to other people educating them about same sex relationships.

To lift the ban, a five-judge constitution bench was formed which was headed by chief justice Dipak Mishra. Along with him, many other judges sat together and listened to the hearing of the act so that they could deliver the final verdict. Before the upliftment of the ban, if a person was caught in this act, then he/she had to serve imprisonment for at least 10 years and also liable to pay a fine. After the support of the people and dedication of the foundation and NGOs, the ban which was there for around 185 years was lifted.

This makes people very happy and encourages them to come out from the shadows and live their life happily. Many people told their stories on social media and expressed their happiness after section 377 gets revoked. Now in many other countries as well you can have an open relationship with your partner as their government is open for gay relationships. You can marry a person of the same sex and can adopt a baby too. These things are now not considered taboo because of their flexibility in the constitution which is made only for the betterment of the people. 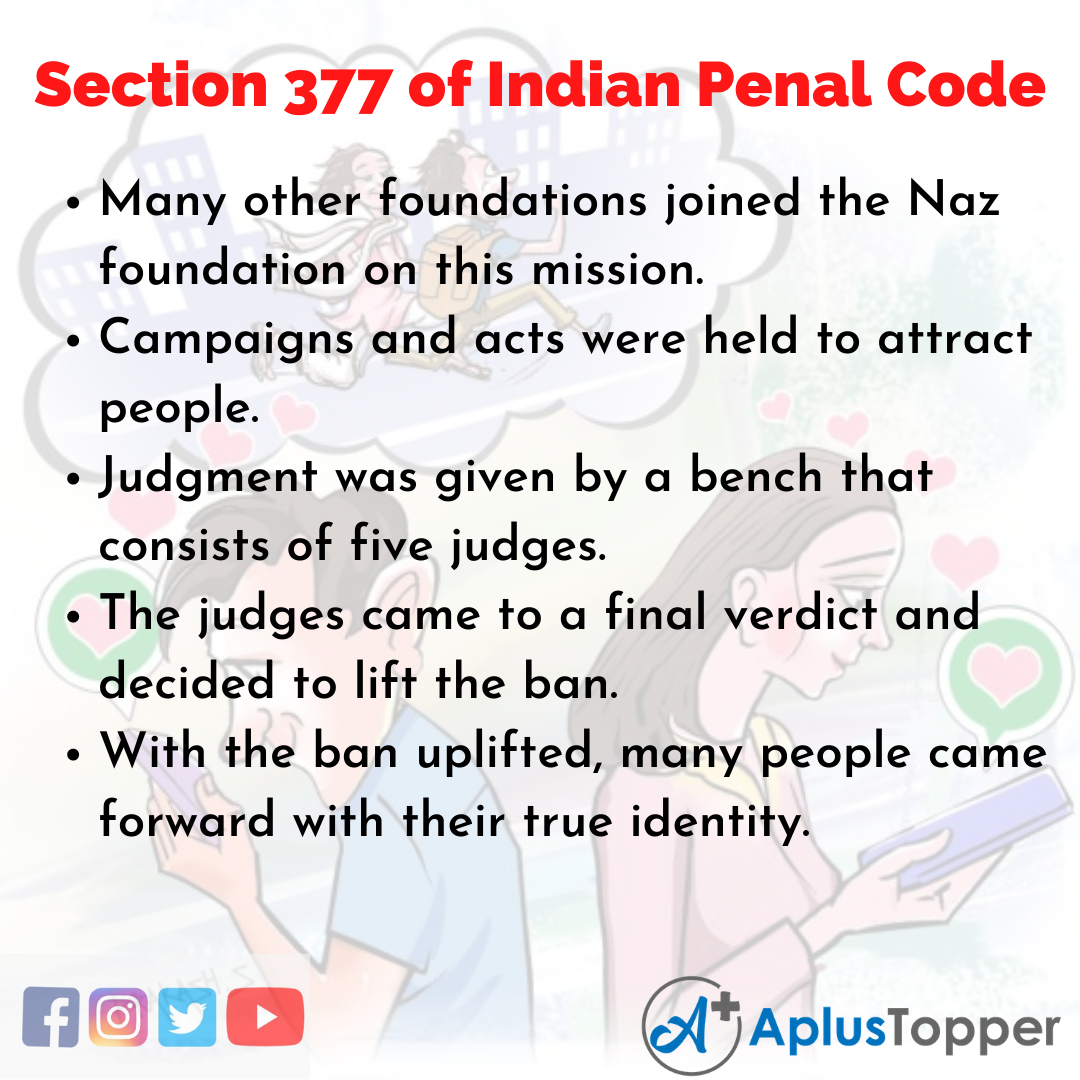 According to the law, Section 377 of the Indian penal code states that a physical relationship between people of the same sex is considered an illegal and punishable offence. It has been in the law since 1864, made by the British Colonial rulers. Even after gaining independence, this law continued in the constitution but in modern times, many people started opposing this act as people think that it is a biased and unnecessary act.

According to medical science, it is normal to generate feelings for the same gender as it depends on the hormonal changes in the body. Many NGOs like Naz Foundation came forward to support the gay community and with the help of their dedication and continuous efforts, the ban was lifted and now the gay relationship is legal in India too. People came forward to support them and were very happy after the ban was uplifted. Since then we have witnessed many beautiful wedding ceremonies of gay couples. 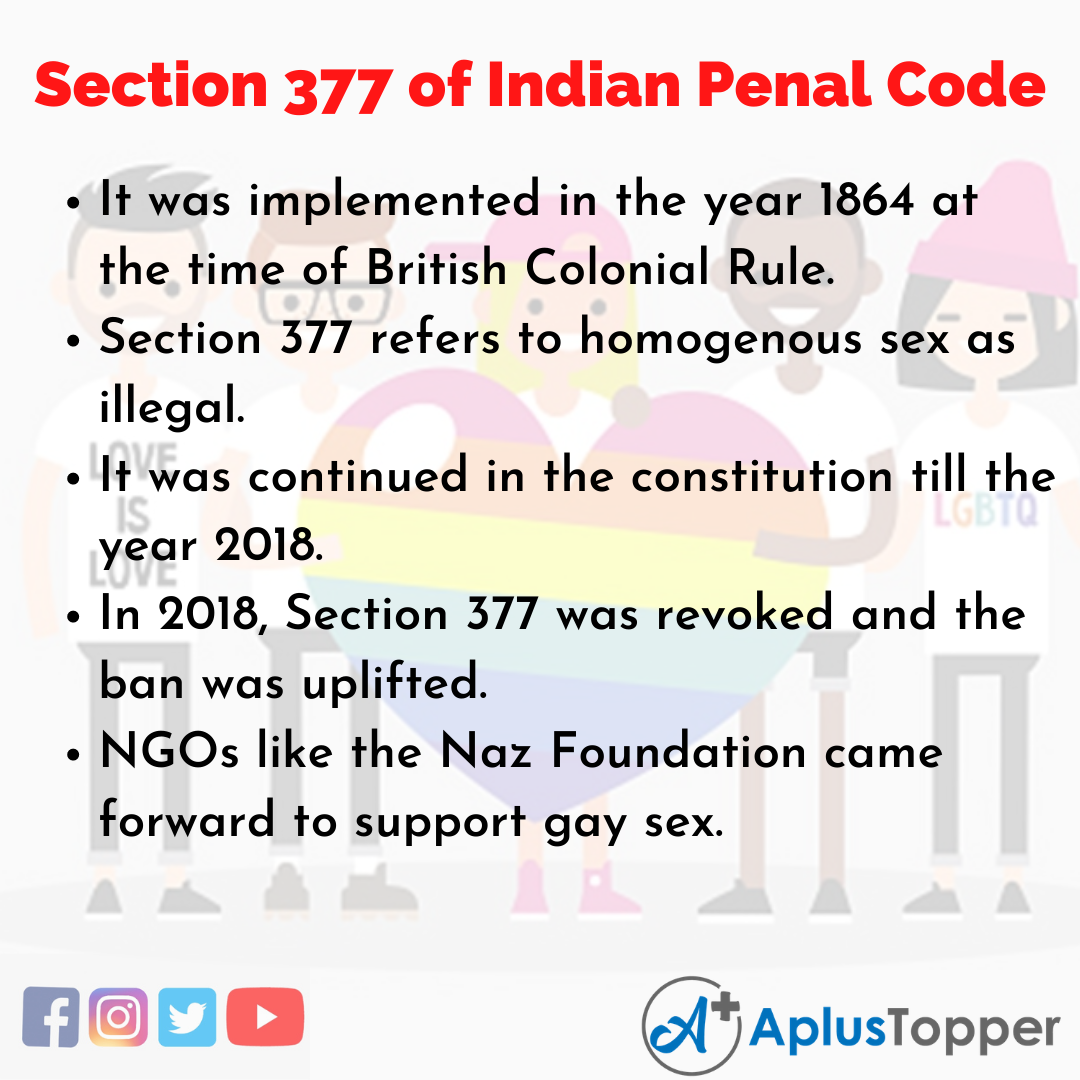 FAQ’s on Section 377 of the Indian Penal Code Essay

Question 1.
When was the Section 377 act introduced?

Answer:
Naz foundation came forward and filed the case in court against the act.

Question 3.
How was the act abolished?

Answer:
The act was abolished by the five-judge Bench who partially struck down to decriminalise same-sex relations among consenting adults.