Essay on Role of Science in Making India: Science plays a very important role in the development of our Country. Whether it’s technology, defence, machine, science contributes its part in all the sectors. It helped in increasing the global economy, increases employment opportunities, and also improves the medical status of India. A country that is developing and wants to be developed should invest in this field as much as it can. In this essay, we will see how science helps India to grow in different sectors and how it is still helping India to become a developed country.

Long Essay on Role of Science in Making India is usually given to classes 7, 8, 9, and 10.

Science is responsible for the development of our country. In fact, with the advancement of Science, India is on the verge of becoming a developed country— it helps in producing medicines, strengthening the defence system, and much more. If we talk about the infrastructure, then science plays a very important role here as well as it helps in manufacturing the machinery and technology which helps in building flyovers, bridges, and roads. No goods can be transferred from one place to another without the help of Science, especially for the manufacturing industries who are manufacturing raw materials and finished goods. It’s all because of the advanced software and our knowledge of science that this is possible.

Now, India is also exporting its machinery and goods to other countries with the support of the advancement of technology. Science also contributes to the medical industry as it helps the doctors and medical researchers in curing diseases that earlier did not have a cure. Science also helps in manufacturing machines and software which help in detecting problems very easily. Further, also assist in finding the cure for new diseases.

Not only in medical and infrastructure but science also plays its part in the agriculture sector of India. With the help of science, we can study about crops and pesticides and through this information, we can grow crops in a favourable environment. Many scientific practices are performed to grow the crops to an extent with artificial rain, better pesticide and insecticide, improvement in fertilizers, and better sowing equipment and machinery. With the help of these techniques, farmers can strengthen the crops, thus reaching a better financial position while benefiting the people and the market as a whole.

Science also helps to make communication much easier as we now can now communicate with one another from across the world through different mediums. It is all because of science, that we can video call our loved ones, discussing the business deals on the phone, etc. This not only improves the relationship among people but also gives birth to many opportunities on an international level.

Science is very important for the development of the country. Without science, there will be no technology and without technology, no country would be able to cope up with the constant need of resources for their livelihood.Science helps doctors, farmers and the army. In short, science is all around us, and without it, India would still be in its early stages.

So, now if you still think science is just a subject that you have to study in elementary school then think again because India has become one of the developing countries because of the role Science played. Thus, any student who aims to serve the country can further think of a career in Science and contribute to the country’s development. 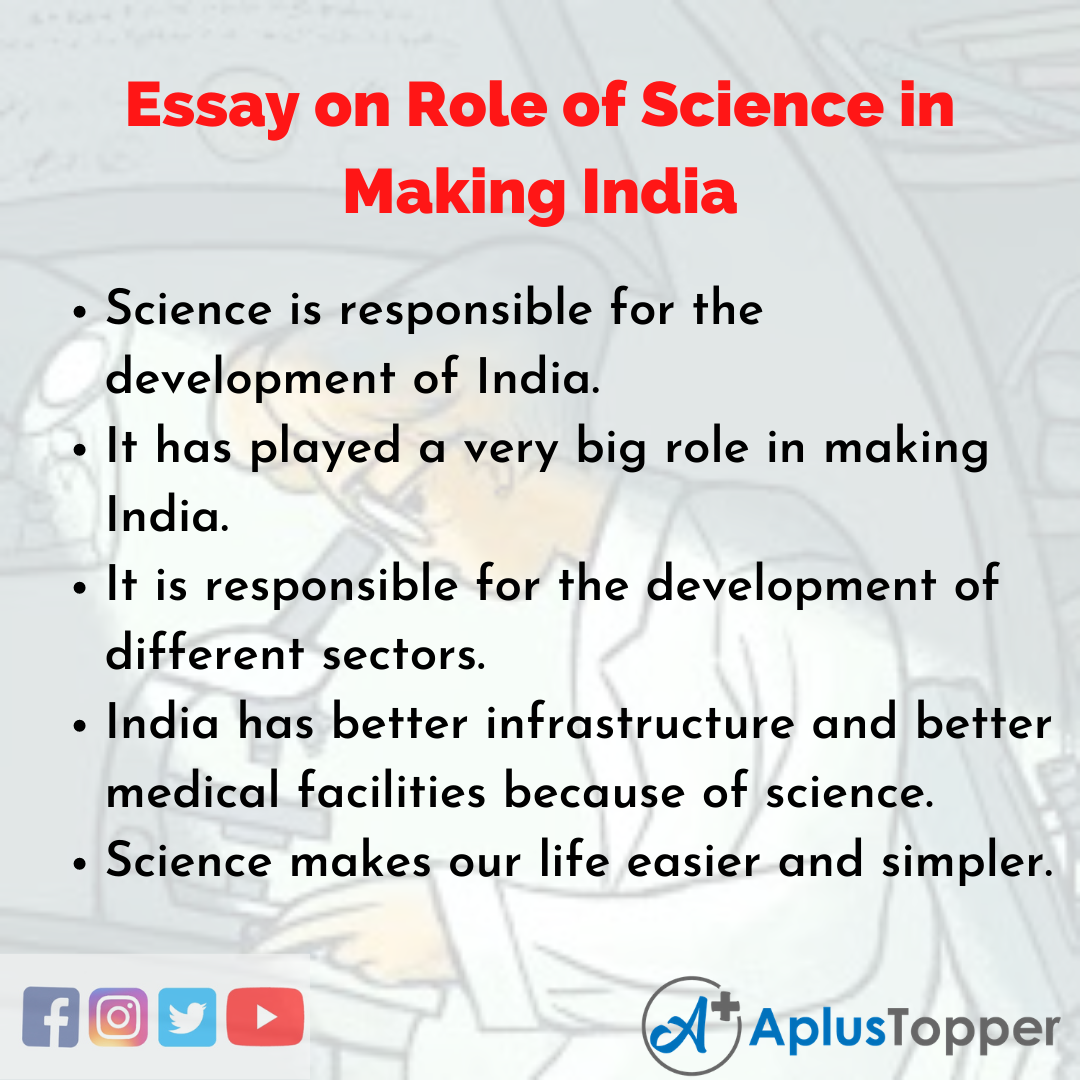 Science has played a very important role in making India what it is today. It has contributed to every sector such as agriculture, medicine, education, business, etc. Our country’s success in different sectors is increasing day by day.

It also helps our farmers to grow crops to a great extent. Also, in the medical field, we can produce medicines and manufacture machinery that can easily detect the disease and cure any existing or new disease.

10 Lines on Role of Science in Making India in English FAQ’s on Role of Science in Making India Essay

Question 1.
Why is science important for a country’s development?

Answer:
It is important because it helps us in giving advanced technology and software.

Question 2.
What has India achieved because of Science?

Answer:
India is the first country to send its satellite on Mars because of the role that science played.

Question 3.
Why is science a boon for India?

Answer:
Science is a boon for India because it helps in developing the medical condition of the country along with aiding the agriculture and infrastructure sector.