Essay on Role of Judiciary in the Country Today: In a country, the judiciary acts as a support system, especially in a democracy. When there is more than one judge present for a group of a state or a country, then it is known as the judiciary. It is very important to have such an authoritative body so that the final verdict can be passed without being unfair to any party. In this essay, we will know the role of the judiciary in our country in the 21st century.

Long Essay on Role of Judiciary in the Country Today is usually given to classes 7, 8, 9, and 10.

The Judiciary system is one of the important parts of a country. A well-established judiciary system, a country can be peaceful and have law-abiding citizens. The Judiciary of a country is responsible for making the laws in the country and making sure that everyone follows them properly. If any situation occurs were citizens of the country are causing trouble that can harm the reputation and property of the country, then the judicial system is allowed to take action towards it.

Under the judicial system, there are lawyers, judges, magistrates, and many other bodies that are responsible for maintaining peace and discipline in the country. Our judicial system is responsible to make sure that every citizen is a law-abiding citizen and does not break laws. In court, where lawyers defend their clients, the verdict ultimately depends on the judge. The judge studies all the facts and evidence that are present at the time of trial and deliver his/her verdict.

The laws and rules and regulations of the country depend on its citizens and officials as every county has a different set of rules and laws. In India, there are 3 levels of the judicial system i.e. District Court, High Court, and Supreme Court. The Supreme Court has been considered as the highest court in the country. If a person is not happy with the verdict of the District Court then they have the right to appeal in the Higher Court. However, after the Supreme Court’s verdict, the person has no choice but to accept the verdict.

Without the proper judicial system, no country would be in peace and there will be confusion all over the country. A judiciary system is responsible for the smooth running of a country where every citizen follows the laws and knows their basic rights. The judiciary has three major roles i.e. to make sure that every person in the country gets justice. The second rule is to make sure that every person or citizen follows the laws and regulation by the government for the betterment of the country. If any person misuses their right then the judiciary makes sure that he/she gets punished for that.

Every country has its judicial system. The laws and rules depend on the government of that country. The government is responsible for making and passing the laws but the judiciary system ensures that everyone follows it with dignity and respects the law. If any person breaks the law, then trials are conducted and the judge decides the outcome. The judicial system in the country ensures that the rights of every person are protected and safe. 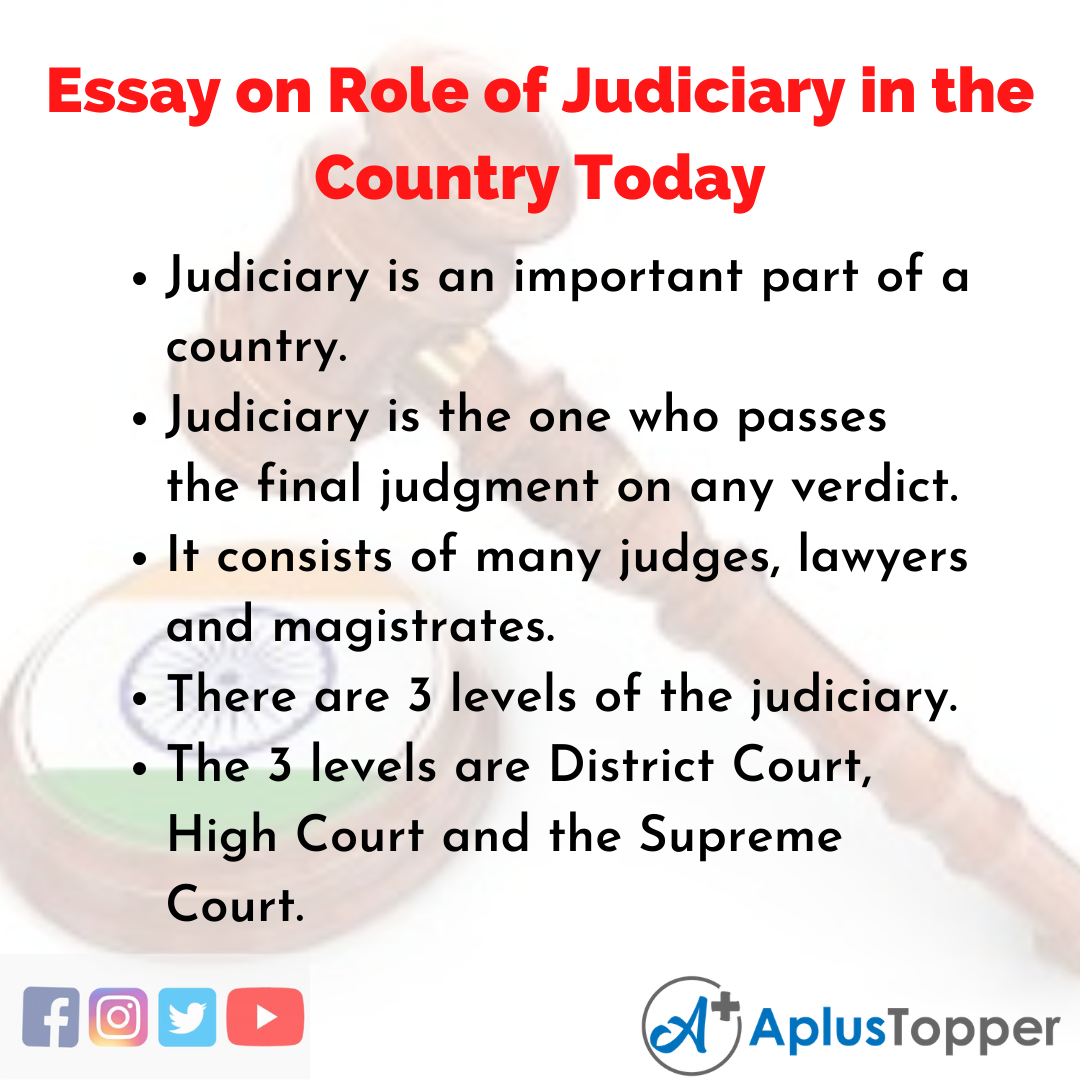 Having a judicial system in a country is very important as without the judiciary, the country would become indisciplined and there will be no code of conduct. Judiciary is the one who passes the final judgment on the penalties and punishments. A judiciary has to be unbiased and honest as it is responsible for the betterment of the country. In a court, the judge is the one who gives his/her judgment which has to be followed by every person.

If we talk about the roles of the judiciary in the country then there are 3 major roles of the judiciary. The first is to provide justice to each citizen of the country as it’s their basic rights. The second is to pass the judgement according to the existing law and the third one is to make news law if the existing law is falling apart or couldn’t help in delivering justice. 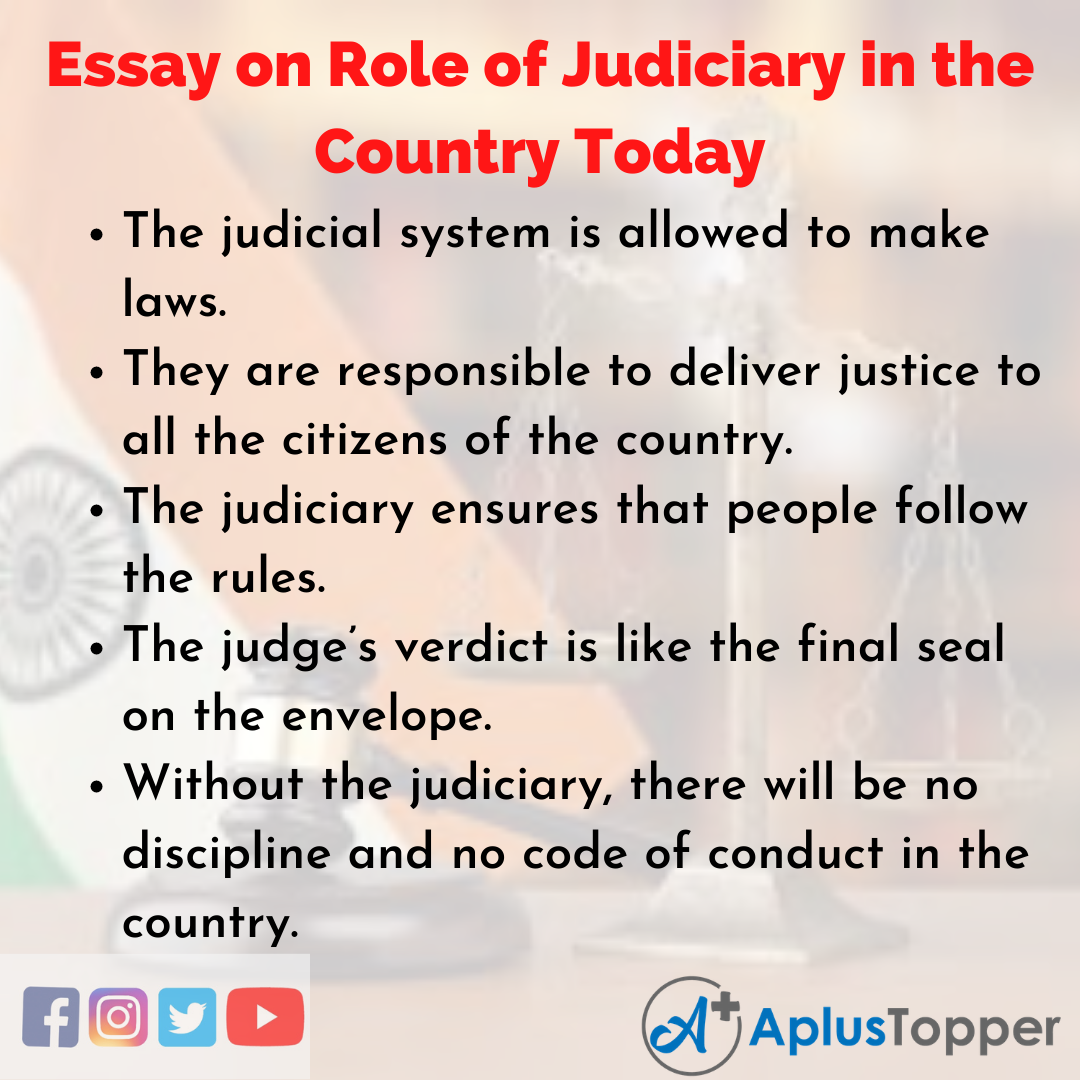 FAQ’s on Role of Judiciary in the Country Today Essay

Question 1.
How many levels of judiciary exists in India?

Answer:
There are 3 levels of the judiciary system in our country.

Question 2.
What are the bodies that come under the Judiciary system?

Question 3.
What is the role of the Judiciary in a country?

Answer:
They are responsible for making laws and delivering justice to every citizen.