Essay on Role of Human activities in Global Warming: As we know that Global Warming is a rising threat for the survival and existence of all the species on Earth as well as the Earth and the environment too. There is also no doubt in the fact that the primary reason behind this effect is human activities. Furthermore, human activities add more to the matter of increasing the issue. And if there is no change in the case soon, then the entire human species and the other ones might face an environmental catastrophe.

Global Warming is a significant effect, and the human community must give up on the harmful and shameful human activities that contribute to this issue. The article contains an essay on the role of human activities in global Warming for the students to spread awareness about the significant issue and its severe cause. This is an essential source to make the students aware of what they must do and what not to protect the environment and avoid the rising global warming effect.

We provide children and students with essay samples on a long essay of 500 words and a short essay of 150 words on the topic “Role of Human activities in Global Warming” for reference.

Global Warming mainly refers to the climatic change that is caused due to various human activities. Human activities lead to several effects like pollution, which immediately leads to climatic change and global warming. Other environmental factors like natural forest fires also add to the cause of worldwide Warming, but the significant effects rise from human activities. Industrialization, agricultural activities, environmental pollution by various human actions, and other energy generation processes like combustion add to this substantial issue’s impact. The pollutants gathering up in the Earth’s atmosphere, also known as the greenhouse gases, leads to climate change and global warming.

Greenhouse gases like Hydrogen, methane, carbon dioxide and others are released due to various actions like use of harmful products that release CFC (for example Air conditioners), burning of fossil fuels, and others lead to the excess greenhouse effect, and that eventually raises the amount of global Warming. These gases cause absorption and emission of harmful radiations, mainly in the thermal infrared rays. As the ozone layer also gets depleted due to the toxic gases, there are some harmful climatic changes.

Furthermore, greenhouse gases end up in an excess amount in the atmosphere due to excessive release from factories and industries in unfiltered and untreated manner. The greenhouse gases in the atmosphere lead to the greenhouse effect after the atmospheric layer’s destruction. Further, as the ozone layer gets depleted, the radiations penetrate the Earth without any regulation limitations for intensity. Additionally, as the warmer radiations stay inside the Earth’s atmosphere, the Earth’s overall temperature rises, which might even lead to the risks for survival of life on Earth due to severe weather.

There is no doubt in the fact that human activities play a significant role in global Warming. The primary activity that adds to the effect is the release of greenhouse gases that raise the greenhouse effect’s impact, resulting in the climatic changes. 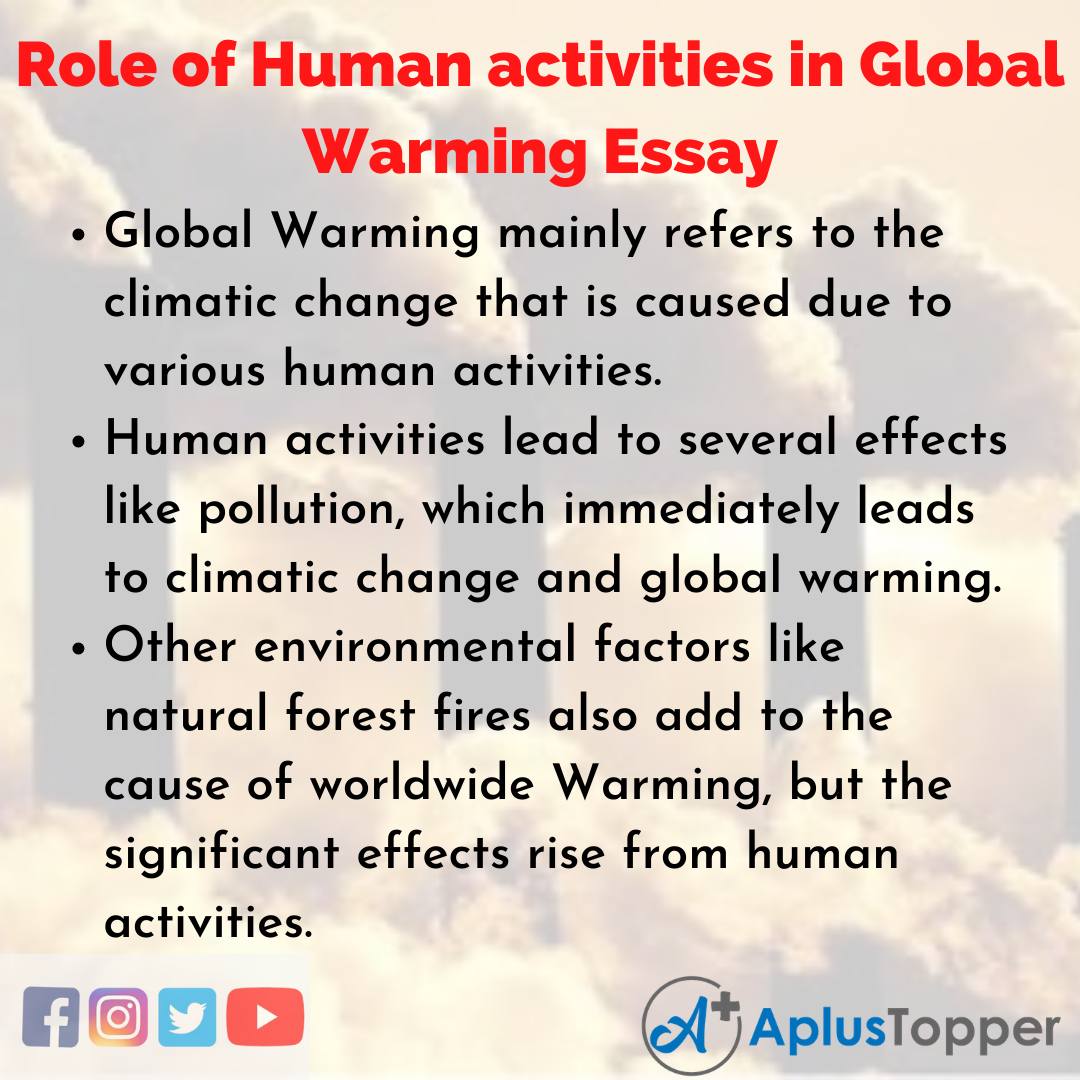 Long Essay on Role of Human activities in Global Warming is usually given to classes 7, 8, 9, and 10.

Human activities adversely affect global Warming, and this is a significant concern to the entire Earth. The Earth consists of all the essential elements for making human life possible on Earth. Even after the importance of Earth and its environmental conditions for human existence, humans continue to mistreat it and cause harmful effects for it. Furthermore, with the beginning of several inventions and industrialization, the essence for the assurance of modern lifestyle, Earth’s living conditions are deteriorating rapidly. This is also a reason why the entire modernization is also a significant concern for the global enthusiasts, adoring Mother Earth and care for the coming generation.

The greenhouse effect is an essential action in the Earth’s atmosphere that maintains the optimum warmth of the surface and makes the existence of life possible on the planet. Greenhouse gases like carbon dioxide, Hydrogen, methane, and CFCs form the layer on the Earth’s atmosphere and prevent the Sun rays and thermal energy from escaping the atmospheric layer. However, due to various human actions like the burning of fossil fuels, greenhouse gases released in excess, and then totally prohibit the escape of thermal energy from the Earth. The entire phenomenon thus results in the rise in Earth’s temperature, known as Global Warming.

Human activities contribute to 75% more in global Warming than the natural phenomenon like gases released by volcanic eruptions, smoke emitting from wildfires, emission of radioactive gases and substances, and others. Another significant role of human actions in global Warming is energy production from fossil fuels. The energies used for transportation modes or operating the industries and generating power add to the cause even more. Further, all the activities result in the emission of carbon dioxide and other harmful gases in the atmosphere.

Nature already provided us with several trees across all the regions for releasing oxygen to ensure the survival of living beings on Earth. However, the global rise is also rising due to other human activities like deforestation for several purposes. This leads to non-absorption of carbon dioxide exhaled by all the animals and humans. This also reduces the assurance of fresher oxygen that we need for breathing. Additionally, nitrogenous fertilizers for promoting agriculture are also considered a role of human activities leading to Global Warming.

Chlorofluorocarbons (CFCs) are produced mainly from the cooling equipment like the aerosol spray cans, production of polystyrene packing materials, and others. Thus, the CFCs produced destroys the ozone layer and is another significant result of human activities, leading to global warming. Studies also unveiled that other greenhouse gases released from paddy fields and garbage landfills are also the causes of the issue. All the roles of human activities in global Warming eventually result in floods, droughts, hotter summers, reduced winters, and several other natural calamities and disasters. This cause an interruption for the existence of life forms on Earth.

Human activities play a significant role in global warming, and as an effect, since 2018, there is a rising average temperature in the entire seasons across the World. Scientists at IPCC (Intergovernmental Panel on Climate Change) have suggested inhibiting the human actions in global Warming. Therefore, all the daily activities of humans eventually add to the causes of global warming.

The entire Earth’s surface has witnessed unforeseen Warming since the earlier times, especially in the current decade. With each passing year since 1977, the seasons are getting hotter, and the span for winters is reducing. Furthermore, the World recorded 16 out of 17 hottest years since 2001, and 2016 was the hottest year of the entire World’s history. The expert agriculturists also unveiled that atmospheric attributes have been altered in the current years. Everyone notices how Warming and cooling are becoming unpredictable, and that is the remarkable effect of climate change and global warming due to several human activities.

The main gas contributing to the greenhouse effect and trapping the warm sun radiations in the Earth’s atmosphere is carbon dioxide. Researchers and experts have also cleared that methane, carbon dioxide, excessive water vapours, CFCs, and other harmful substances in the environment that deplete the ozone layer are available in excessive amounts. They act to prevent the ozone layer from trapping only specific frequencies of infrared rays and dissipate maximum rays back from out of the Earth’s surface. The gases trap the heat in an excessive amount at the Earth’s surface and then keep the planet warmer. A small amount of it is essential for ensuring the existence of life on Earth, but an excess of it might even make the survival impossible on the planet.

Expert climate researchers have realized that the convergence of substances that help in ozone layer depletion of the environment has developed rapidly due to the emergence of industrial revolution and urbanization. Furthermore, the cooling systems like the air conditioners use the CFCs, which are mainly responsible for depleting the ozone layer that also acts as the protective covering of the Earth. The rising usage of CFCs has resulted in developing a hole in the ozone layer and thinning of it, which is essential for protecting us from harmful infrared rays entering the Earth. Thus, this is evident how ozone-harming substances act to raise the Earth’s warmth and cause Global Warming.

Not only these, but there are many more examples and evidence which shows the role of human activities in Global Warming and climatic changes. For example, the increasing pollution of various types is mainly due to gas emissions from vehicles and waste and gases from the industries. This eventually leads to the trapping of harmful substances in the Earth’s atmosphere. Such substances raise the temperature of the planet and are also dangerous for humans and animals as they have some fatal effects. Due to the rising pollution level along with Global Warming, it had become a significant reason for the extinction of various species from the planet.

There are several steps that we might take for reversing the role of human activities in global warming. First and the most crucial step to be taken is to move towards consumption of the energy-efficient sources and renewable energy sources. Additionally, using fossil fuels must be reduced significantly, and CFC releasing products must be used in lower amounts. We must also try our best to save whatever of the ozone layer is left so as to protect ourselves from the harmful radiations of Sun. Using LED bulbs is another measure that we might choose for contributing to saving energy.

Furthermore, we must also reduce the vehicles’ dependency and walk as much as possible while travelling. This will also help in staying healthier and fit and will save fuel and eventually save Earth. We can also choose carpools if we have more considerable distances to cover. Using electric vehicles, wherever available, is another effective way to contribute to energy conservation and lower greenhouse gas emissions.

Temperature alteration at a global level has resulted in a long term action that requires constant activities and speculation for decades. It is not such task that can be completed and achieved in just a day or two, as here we must reverse the full effect and have to attain the older days with moderate climatic conditions. Therefore, there is no doubt that several short and long term measures are essential by all the nations to achieve the objective.

The role of human activities in global warming is a long proven one and requires more concern. The actual action must be taken soon against the unnatural and unpredictable weather changes. Several arrangements are also needed for gaining better results and energize and promote the usage of fewer carbon powers across the World. We must also expand the use of sustainable power resources. Reforestation is the other option that we must consider rather than deforestation and must develop the ways of urbanization and modernization without increasing the latter action. This situation and issue require collective action. The entire human population must come forward and make some efforts to convert the role of human activities in global warming to human activities in saving the Earth. 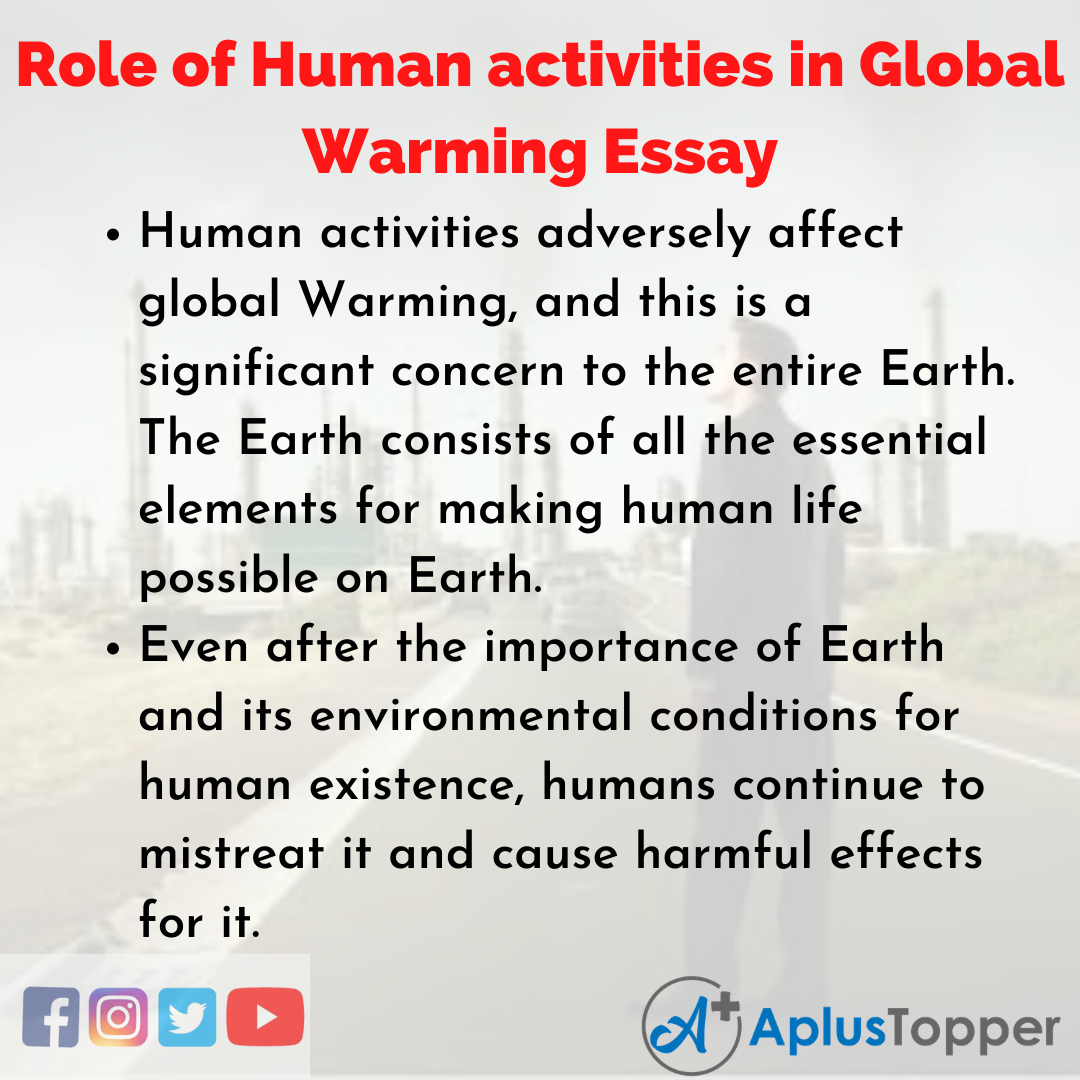 Essay on Role of Human activities in Global Warming Conclusion

Each of the above Essay on the role of human activities in global Warming contains the various human actions contributing to the rising emission of greenhouse gases and increasing global Warming in multiple ways. This is an essential source for raising awareness among the students and providing them with the best resource for learning and knowledge gaining.