Essay on Rabindranath Tagore: The National Anthem that we sing with such pride as written by Rabindranath Tagore, who was one of the most significant men and nationalists in India. He was a poet as well as a writer and had won the Nobel Prize for his piece known as “Gitanjali.” His writings are still studied by students all over the world.
We have compiled some long and short essays for the use of the readers.

Essay On Rabindranath Tagore is for the use of students in classes 7,8,9 and 10.

Rabindranath Tagore is the Bard of Bengal and is hailed as one of the most prominent Indian Poets. Tagore’s intense contribution to the world of Literature earned him the prestigious Nobel Prize in Literature. His verses and proses are considered unique in their way that the readers can relate with their day to day lives.

Tagore was born in an elite family of Calcutta and was the youngest of the thirteen siblings. He was not the brightest of student during his school life, but there was always a creative spark in him, which made formal learning difficult for him, and he detested the concept of classroom schooling.

He received great classical music lessons from professional musicians, who were sent by his father. Tagore’s family had an educational bent of mind, which made him stand out of the rest.

His phenomenal talent in portraying the real state of Bengal attracted the mass. In his stories, he tried to reflect what he saw and felt instead of writing farfetched stories. He had used his writings as a weapon to break free from the shackles of the traditional society and helped to construct a modern and logical society. His work is liked and appreciated all over the world and has been translated into innumerable languages.

“Manasi” was one of his best works, which perfectly showcased who genius a writer he was. Many of his poems were a satire to the society and was written t. o raise voice against the dominating British rule. His works portray the humble life and miseries simultaneously. His genuineness was shown by the poignancy and poise writings.

Tagore was quite vocal about his views on different political movements. He was more in support of the intellectual upliftment, and his views often conflicted with Mahatma Gandhi and other eminent political leaders. Tagore was not in favor of the Swadeshi Movement, and Globalisation was something that had a significant impact on him even during the 19th century. He was so patriotic that he had returned the Honorary Knighthood award as a protesting act against the Jallianwala Bagh Tragedy.

You can read more Famous Personalities/People’s Essay writings over here.

The dissatisfaction of the traditional education system in England inspired him to start the “Vishwabharati University” in Santiniketan, which was initially a school that offers a friendly environment for the students to study and explore their creativity.
The ending of the legend’s life was painful. He was infested by 2 elongated attacks of sickness and was affected by an exhausting disorder. 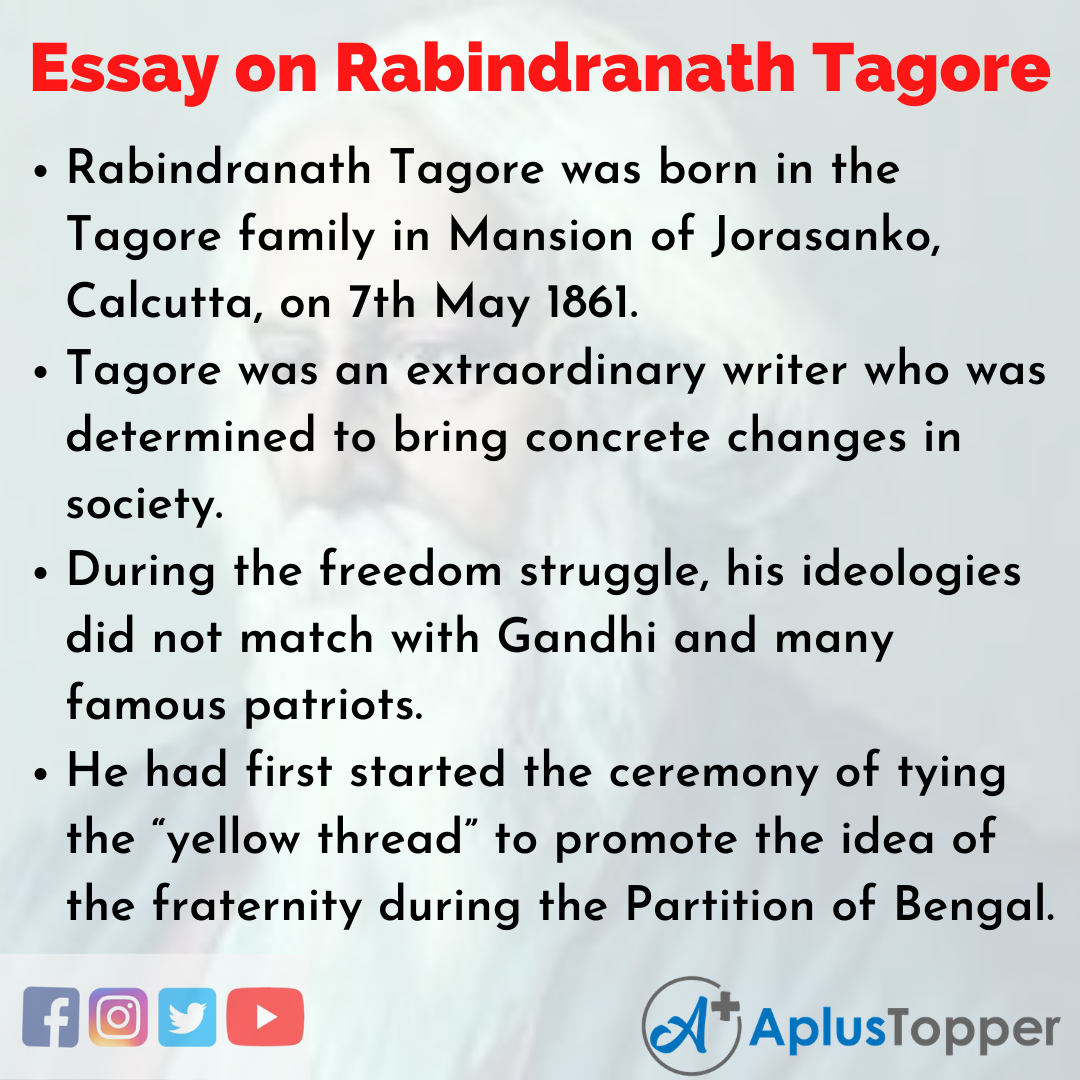 Rabindranath Tagore was a great Bengali poet who had upgraded Bengali Literature in commendable ways. He was the youngest son of the leader of Brahmo Samaj, Debendranath Tagore. Rabindranath Tagore wrote the National Anthem of India and two other countries. He had written famous Dramas like Visarjan and Valmiki Pratibha. Rabindranath Tagore’s short stories are the most appreciated ones, out of which The Kabuliwala is very renowned. He received the Nobel Prize for his work “Gitanjali: the song offerings.” He passed away on 8th august 1941 when the world mourned for him. 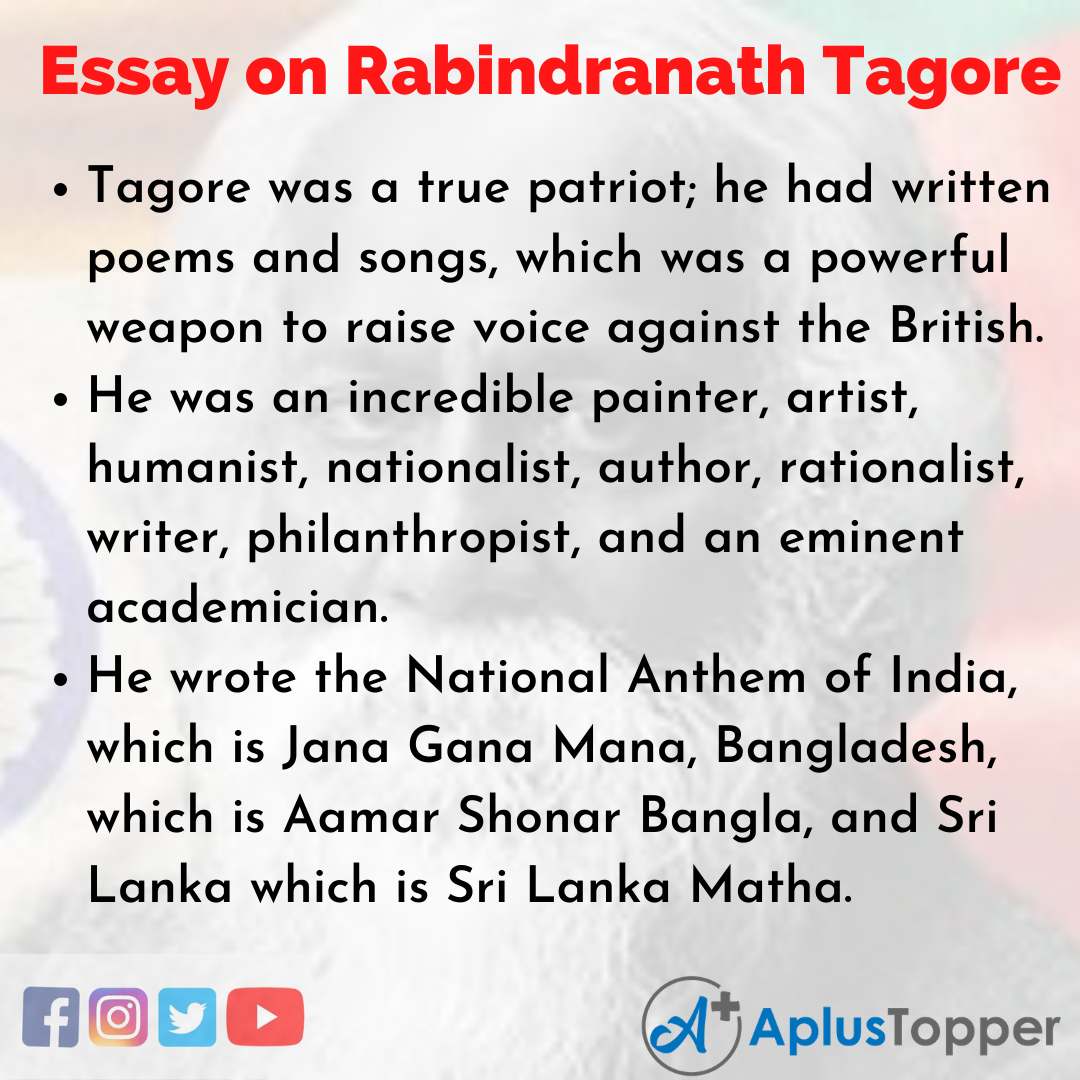 Question 1.
What was Rabindranath Tagore famous for?

Answer:
Rabindranath Tagore was famous for his paintings, short stories, novels, and poems. Tagore was awarded the Nobel Prize in 1913 for Literature.

Question 2.
In which year was Rabindranath Tagore born?

Answer:
The Bard of Bengal, Rabindranath Tagore, was born on 7th May 1861, Calcutta.

Question 3.
What are Rabindranath Tagore’s most famous short stories?

Answer:
Some of Tagore’s most celebrated short stories are the Kabuliwala, the postmaster, etc.