Essay on Qutub Minar: The highest ‘stone tower’ of India that is located in Delhi is called the ‘Qutub Minar’ or also spelled as ‘Qutb Minar.’ This tower was built in 1193 and is now declared as a UNESCO World Heritage Site. It symbolizes a significant time of Indian history and also contributes to an attraction for travel and tourism. Qutub Minar has eventually grown to be a part of our culture, along with history. And people often keep the tower as a must on their site-seeing list while traveling to Delhi.

We are providing long and short essay samples on the topic of Qutub Minar to help students. And we are also offering ten pointers on the topic so that the students can use them as a reference while structuring their essays.

On the topic Qutub Minar, we are providing a long essay of 400 to 500 words and another short essay of 100 to 200 words so that students can use them as a reference for writing their assignments and essays in an exam.

Qutub Minar Essay will be helpful as a reference for writing an essay on the topic ‘Qutub Minar’ for students of classes 7, 8, 9, and 10.

One of the old and famous historical monuments of India is Qutub Minar, which was built in 1193. This is a soaring 73 meters tall tower and is the highest stone minaret in the world and second tallest minaret in India after Fateh Burj (100 meters). Qutub Minar is a five-storied tower with a base diameter of 14.32 meters, and it contains 379 stairs that reach the top of diameter about 2.75 meters. The minaret has five distinct stories surrounded by a projected balcony encircling the tower.

Qutub Minar was built being inspired by the Minaret of Jam in Afghanistan; hence the Afghani and Indo-Islamic Architecture is evident in the design of the tower. The interiors of Qutub Minar have Quran verses intricately carved on the walls. A beautiful garden surrounds this tower, and it is located in the Qutub Complex of Seth Serai, Mehrauli region of New Delhi, along with several other ruins of historical monuments that are also present inside the complex. The first mosque of India, Quwwat-ul-Islam Masjid, is located on the north-east side of the Qutub Minar and was built in 1198.

The reason behind the building of Qutub Minar was the victory of the Ghurid Dynasty emperor Qutub-ud-Din Aibek over the last Hindu ruler Rajput Prithviraj Chauhan of Delhi. Qutub-ud-Din Aibek is also the founder of Delhi’s sultanate rule, and their victory marked the beginning of Muslim rule in India; hence Qutub Minar is also called the ‘Tower of Victory.’

Earlier the courtyard consisted of 27 Hindu and Jain temples which were demolished by Qutub-ud-Din Aibek after capturing the throne. Qutub-ud-Din Aibek started the construction of Qutub Minar, for the use of muazzin (crier) to give calls for prayers, but he could only build the basement and raise the first storey of the tower. Then his son-in-law and successor Shams-ud-Din Iltutmish continued the construction and made the tower of three stories. Till this, the tower was made of red sandstone and marble.

A lighting incident demolished the top floor, and it was Firoz Shah Tughlak, who took the responsibility to renovate it in 1368 and added two more stories made of white sandstone and marble. After that, he also built a cupola (a dome top) above the fifth floor i.e., the last storey of the tower. But in 1802, the dome fell because of an earthquake, and the whole tower was damaged. It was Major R. Smith (a Royal Engineer of the British Empire) who restored the Qutub Minar and replaced the top position of the cupola with a Bengali-style ‘Chattri’ in 1823. In 1993, UNESCO added Qutub Minar to the list of World Heritage Sites in India. 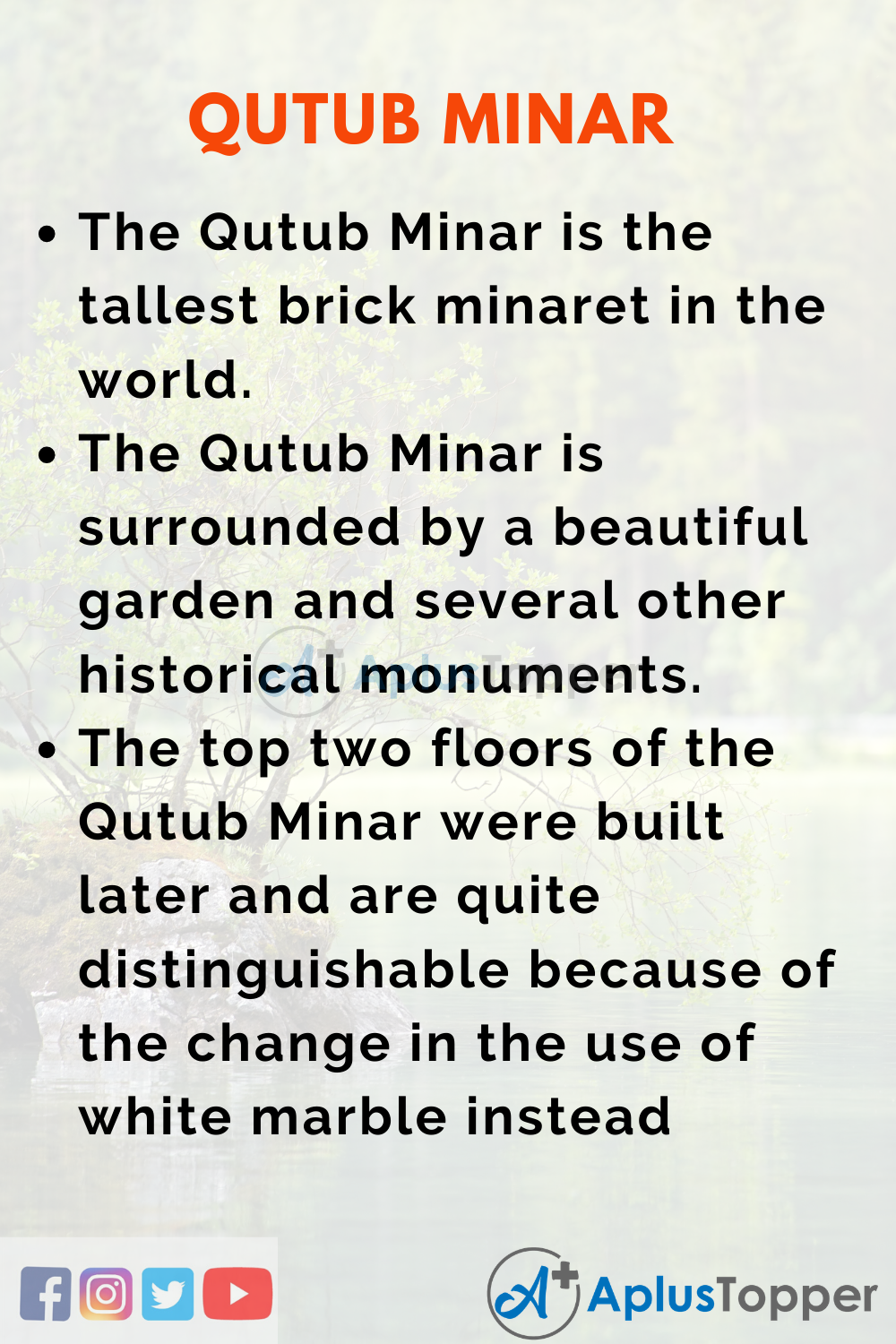 ‘Qutub Minar,’ which is also spelled as ‘Qutb Minar,’ is located in Delhi, and it is the tallest brick tower of the world with a height of 73 meters. This minaret has five stories and 379 stairs from the bottom that reaches to the top. Each the storey is accompanied by a balcony that encircles the minaret.

Sultan Qutub-ud-Din Aibek commenced the construction of Qutub Minar in 1193 AD, but he could only build the basement. Then the construction was continued by his successor, Iltutmish the third of Mamluk kings, who was also his son-in-law, and he constructed till three stories of the tower. But after a lightning incident that damaged the top floor, it was Firoz Shah Tughlak, who renovated it in 1368 and added two more stories, i.e., the fifth floor is the last storey of the tower.

The tower is viewed as the symbol of the military power of the Turko-Afgan Dynasty. Now the Qutub Minar is a popular tourist attraction site of India, and UNESCO has declared it as one of the World Heritage Sites. we will soonly update Qutub Minar Essay in Hindi, Urdu, Telugu and Sanskrit. Question 1.
What is the reason behind building Qutub Minar?

Answer:
The 73-meter high tower was built to celebrate the defeat of the last Hindu ruler in Delhi to signify the entire Muslim dominance. The victory tower was built in 1193 by Qutub-ud-Din Aibak, and Iltutmish in Mehrauli of Delhi, India.

Question 2.
What was the accident that happened with Qutub Minar?

Answer:
A few centuries ago, a lightning strike hit the top storey of the tower, but later, Firoz Shah Tughlaq renovated the damaged storey and built another on top.

Question 3.
Can we enter Qutub Minar? If yes, then what is the ticket price?