Essay on Pune: Pune is a city located in the state of Maharashtra. Previously known as Poona, it is a city situated at the junction of Mutha and Mula rivers. It is also given the name – “Queen of the Deccan”. It is considered as a capital of culture for the people of Maratha.

This city gained recognition in the early 17th century as the capital of Bhonsle Marathas. Mughals occupied this city for some time, but it was acquired back by Marathas and thus remained capital for Marathas till 1817. Now, it has become a famous tourist resort which offers cold weather along with various parks, hotels, religious monuments etc.

We are providing students with essay samples on a long essay of 500 words and a short essay of 150 words on the topic Pune for reference.

Pune has a population of over 3.8 million. Besides, it is also known as the Queen of the Deccan. Since Pune is also known as the second biggest city, it is widely known for its monuments, foods, and so on. Pune is very popular for its Maratha culture and beauty. Back in ancient times, Pune was ruled by the well-known Rashtrakutas and Shivaji.

The languages that are primarily used across Pune are Marathi, English, and Hindi. Whereas, the major religions of this city are Christians, Hindu, Muslims, Parsis, Sikhs, and Sindhis. The temperature of Pune falls typically between 15 to 35 degrees. Thus, the most pleasant time for visiting Pune is termed to be October to March.

The climate of Pune is normally very pleasant. It comprises of both semi-arid and hot climate, which makes it better for the people to live in this city. The primary seasons present in this city are winter, monsoon, and summer. The temperature that is maximum in Pune is 42 degrees. Although the temperature might look higher, it is lower than that of Delhi.

In Pune, the duration of monsoon is from June to October. It is stated to be a pleasant and beautiful time amongst the entire seasons.

The culture of Hindus dominates this city. Although there are several different types of religions and cultures, present here. It mostly comprises of Marathas, and the festival that is celebrated splendidly across the entire city is the Ganesh Chaturthi. The Ganesh Chaturthi celebration is normally filled with love, excitement, and happiness. Pune is entirely decorated with sparkling and vibrant lights during this festival.

It is a multi-lingual city, but the language that is used primarily amongst the people in Pune is Marathi. Besides, it is also famously referred to as the biggest metropolitan economy across the country and holds the eight places. It even holds 6th position for gaining the highest per capita income throughout the country. The various types of sectors present here are Education, Information Technology, and Manufacturing which is very vital for enhancing the economy of this city.

Pune is also considered as the motor city of India. Also, this city has various international companies of the automobile that include Mercedes Benz, Force Motors, Volkswagen, General Motors and Bajaj Auto. These companies have already established greenfield facilities near Pune. This city is also known as “Oxford of the East” since it is home to various famous educational institutions. Thus, this city is considered a major education hub of India. The Indian Army has a headquarter located in Pune.

Pune is also popularly known for its numerous transportation facilities comprising of rickshaws, autos, busses, railway, and so on. Besides, uber and ola are also available across the entire city. It is also referred to as the Oxford of the East throughout the country. This place is visited by several students to continue their studies due to the availability of good universities and colleges.

Besides, it is also the home for the southern command headquarters of the Indian Army. One of the highly prestigious academies is also located here in this city, i.e. Khadakwasla Academy. 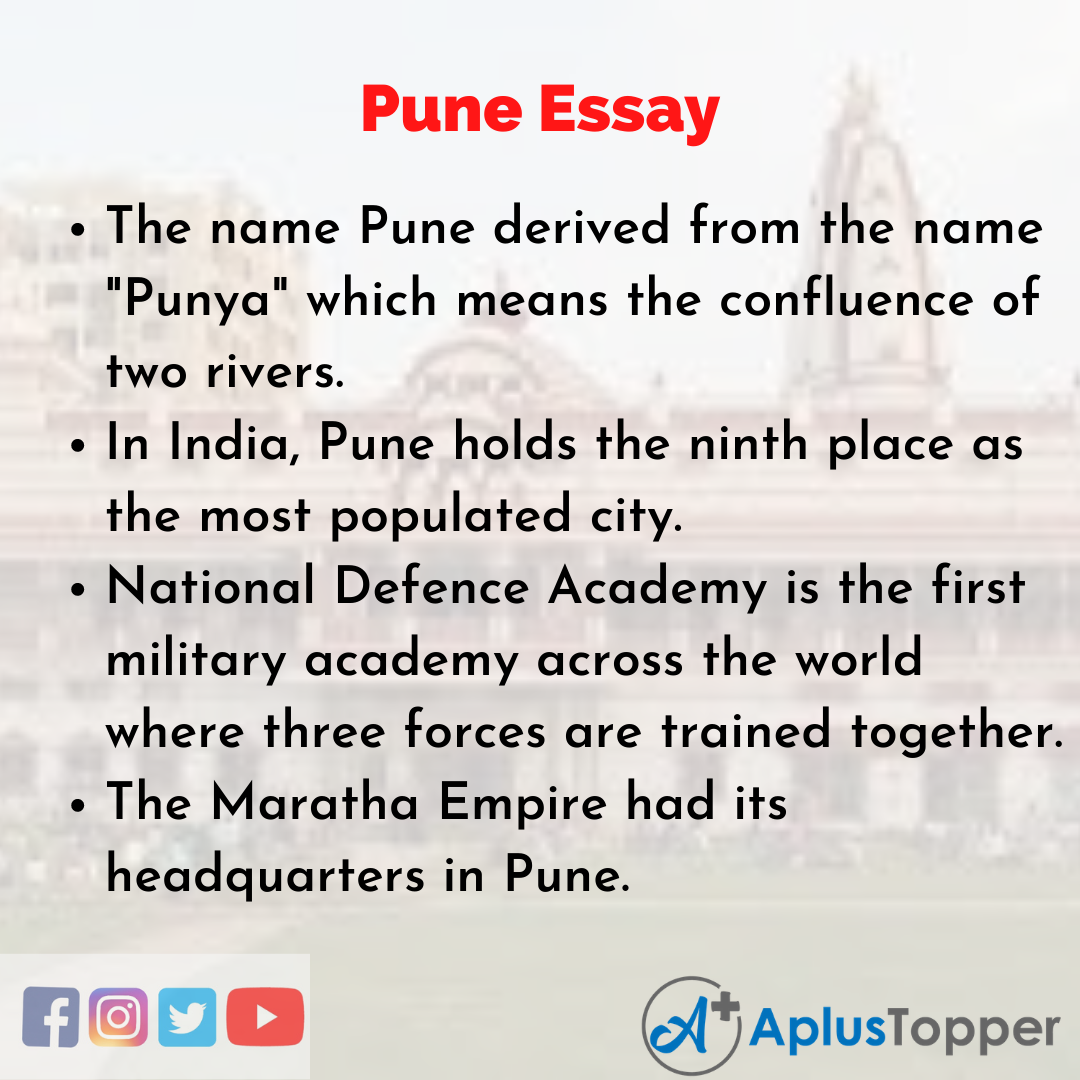 Across the entire state of Maharastra, Pune is known to be the second biggest city. The locals of Pune normally refer to it as Poona. During the time of British rule, it was known as Poona. In the entire, it is considered as the 7th polluted town.

This city is situated at an altitude of 560 metres on the Deccan Plateau. It is also popularly considered as the cultural capital of the state since the people residing here are rooted and cultured.

Due to the presence of numerous highly recognized colleges and universities, it is referred to as the Oxford of the East. Besides, the youth population of Pune is also considered to be one of the highest.

Also, several students come to Pune to continue their studies since it is known as an important education centre across the country. Back in the 13th century, Pune was referred to as Punawadi.

10 Lines on Pune Essay in English

1. The name Pune derived from the name “Punya” which means the confluence of two rivers.
2. In India, Pune holds the ninth place as the most populated city.
3. National Defence Academy is the first military academy across the world where three forces are trained together.
4. The Maratha Empire had its headquarters in Pune.
5. One of the best-known jails across India is located in Pune, i.e. Yerwada Central prison.
6. The first girl school started in Pune back in 1848 by Savitribai Phule.
7. It is the home to several prestigious educational institutes, so it is referred to as the Oxford of the East.
8. Pune is popular for its numerous delicious and affordable cuisines, including Missal Pav, etc.
9. This city is also very popular as a shopping destination.
10. In the entire country, Pune is famous for having the first high-speed expressway. 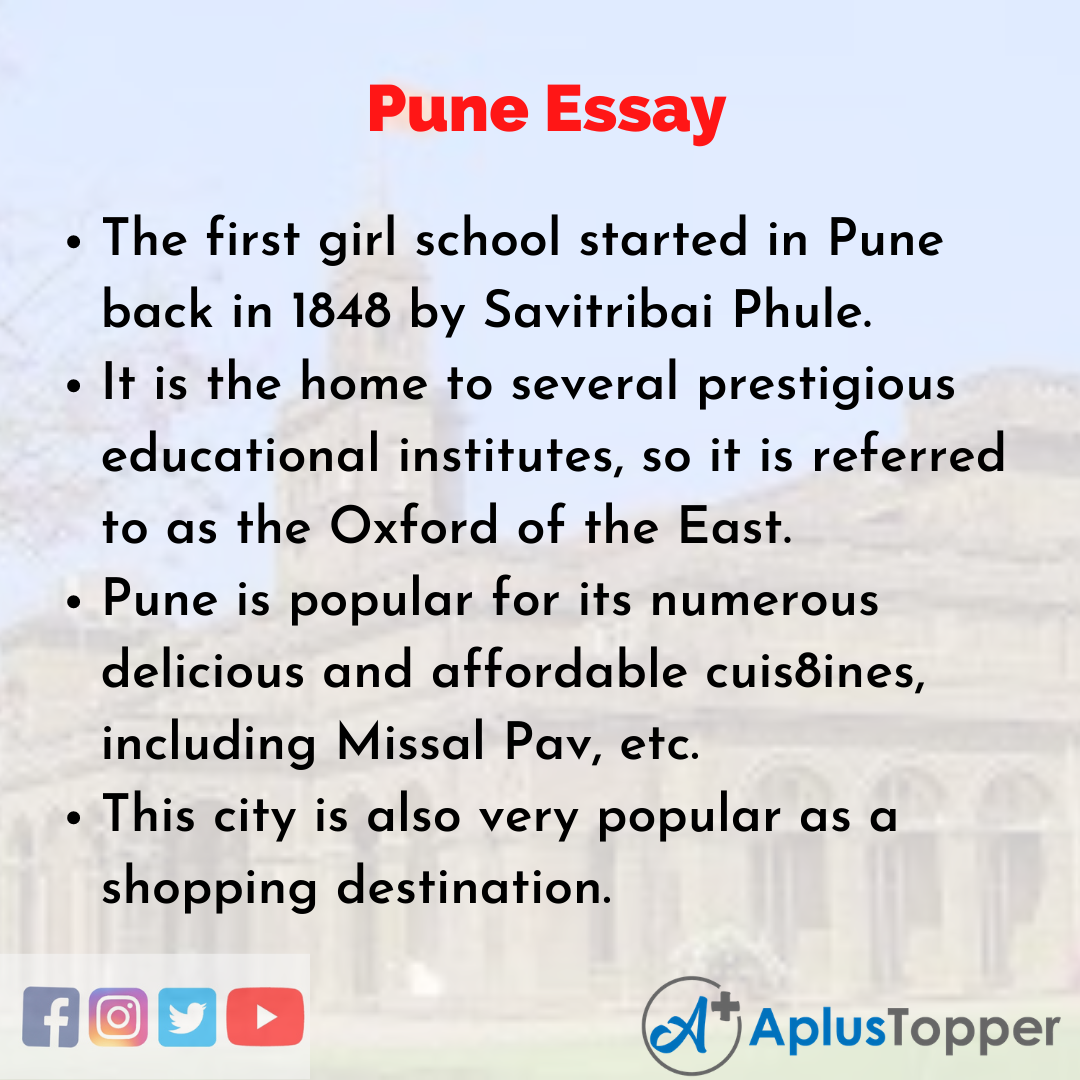 Question 1.
What are the things that are popular about Pune?

Answer:
It is famous for several things, including its religious places, science places and historical buildings.

Question 2.
What time is known to be pleasant for visiting Pune?

Answer:
It is known to be a great time to visit Pune from July to February.

Question 3.
What can one do in Pune?

Answer:
The popular things that can be done in Pune are Aga Khan Palace, Osho Ashram, VetalTekdi, etc.

Question 4.
What are cuisines most popular in Pune?