Essay on Public Transport: Whenever you walk or drive by a road you see various other vehicles running besides you, carrying numerous passengers at a time. These vehicles constitute the public transport of a city or any locality.

As the name itself, Public Transport is easily accessible to the general public. It includes vehicles like, autos, taxis, buses, trams, metro rails, trains etc. These public transport facilities are shared by everyone without any discrimination. It can carry numerous people from one point to the other, at a time.

Transportation has become a necessary part of life today. Living without any transportation is very difficult as the world has changed to a global village.

Today in the modern era with the advent of new technologies and newer vehicles are introduced with higher speeds which take less time to reach the destination. People are always in search of faster and easy means of travelling to their destination. They want a transportation medium consuming less time at low costs. To achieve this people own vehicles to travel on, but there is a large majority of people who can’t afford to buy their own vehicle, for such people, public transport proves to be a boon.

Encouraging people to use public transport is a good way to reduce pollution and other traffic problems. If better public transport facilities will be made available it will discourage use of individual vehicles. That will also help in saving time, energy, money and other resources.

From the olden days, transport was the necessity for human beings to travel from one place to another. Man has greatly evolved from simply walking followed by using animals as mode of transportation to the moment when vehicles were created.

But today in the modern era, people usually opt for private vehicles, which leads to more vehicles on the road that leads to heavy traffic jams and air pollution. These are the major problems especially in the cities. The only way to solve this problem is to encourage people to use public transportation instead of using private vehicles as it is the best and easiest way that people can opt for.

When use of public transport will increase , there will be fewer private vehicles on the road. Some means of public transport such as high-speed trains, metro trains, trams cause zero pollution because they run on electricity. Another advantage is that people can do anything while taking public transportation as you can finish an assignment, read a book or do any type of work.

Also using public transportation saves a lot of money. People do not have to buy their own vehicles. The fare for buses or taxis are cheaper than private vehicles when compared to the diesel prices. Also, people do not have to spend lots of money on the maintenance of their vehicles or have to worry about parking as well.

The modes of public transport play an important role in the development of the country’s economy too. The better means of transport, the faster the growth rate of the economy would be. Also there should be a proper network of means of public transport in villages, thereby increasing economic activity there, automatically. 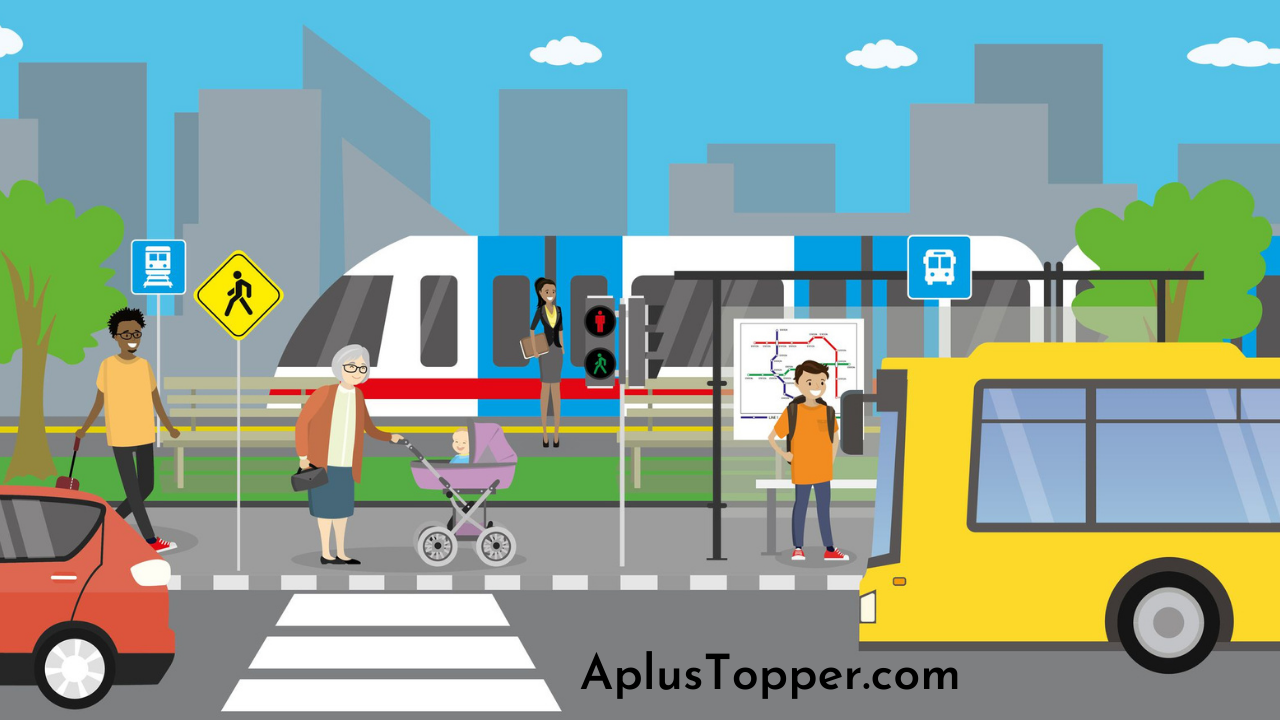 Question 1.
What are the benefits of using public transport?

Answer:
Public transport is beneficial to your overall health and also has positive effects on the environment.

Question 2.
Why do people nowadays opt for their own vehicle?

Answer:
Public Transport offers a number of facilities and are the easiest way to travel though people usually prefer private ones because of the following reasons.