Essay on Poverty: As commented by Mahatma Gandhi decades back, ‘Poverty is the worst form of violence’. During recent years, Poverty is the biggest hurdle in an entire way towards India’s development. Poverty is a worse condition in which the person entirely fails to fulfil his/her physiological needs and the need for food and luxurious life. Poverty-stricken people can also have the best facility for fighting against the diseases and get balanced nutrition and proper medical assistance whenever required.

Even since the immemorial times, poverty has been a more comprehensive concerning issue, and it intensified more in India under the British rule, reaching a peak in the 1920s. The essay on poverty contains various facts and details that are important for understanding the students about the concerned agenda.

We provide children and students with essay samples on a long essay of 500 words and a short essay of 150 words on the topic “Poverty” for reference.

Poverty is the lack of food, clothing, proper shelter, medicine, education, and other essential elements for better survival in the World. It is also the assurance of having equal human rights. Poverty is a worse situation that forces people to starve without proper shelter, clothing, ethical rights, and educational assistance.

Several reasons lead to poverty in any country. Even though there are several solutions to avoid the poverty attack, the lack of proper unity among a country’s residents for following the answers leads to the issues. This is another primary reason why the poverty rate is rapidly rising with each passing day.

The spread of the epidemic diseases also leads to the rising rate of poverty in any country. This is because most poor people cannot maintain their health status and get appropriate medical aid in such situations. Poverty is the adverse situation that makes the people unable to go to the service assurers for their needs, and go even more towards the diseases and illness due to unclean and unhygienic food and water and living in unhealthy situations.

It is the effect that makes people powerless and risks their freedom. This is because a poverty-stricken person might enter the vicious circle of slavery. But, this is an inescapable issue, and thus the person who is stuck in it has to live with it. Poverty is an adverse human situation that brings grief, pain, and despair in individuals’ lives. It is the lack of money and necessities for living luxuriously and adequately with access to all the essential elements. This is an adverse situation that might also make a child unable to enter the school and study during childhood, and this is also the reason behind worse social issues like child labour and slavery.

Poverty means the shortage of money for arranging even the perfect two times meal and have a healthy nutritious diet. Such people do not have enough money to afford the essentials for living a perfect and healthy human life. Thus, there are several ways available that one can use for defining poverty.

Poverty is the most common social issue in the underdeveloped or developing nations, like India and Africa. These nations have a higher poverty rate than the developed countries across the World. This is because a significant segment of people in these countries do not have access to better-earning opportunities and income and cannot meet the basic needs of life. A more substantial segment of these nations’ population is illiterate, stays hungry, and lives without a home and proper clothes.

Poverty is also the primary reason that hinders the country’s economic, social, and political growth. Poor people do not have enough money to satisfy all their needs and lives the entire life without access to many facilities, including even a two-day meal and clean drinking water. Poor people are thus forced to enter into wrong paths and do crimes for earning their living. There are several reasons for poverty in a nation, and for India, it was mainly the British rule, slavery conditions, and rising epidemic illness rates. Children from low-income families do not even get access to education and facility to have proper schooling and medical aids. Many of them are not even aware of the modern advancements that the comparatively more prosperous people have access to. 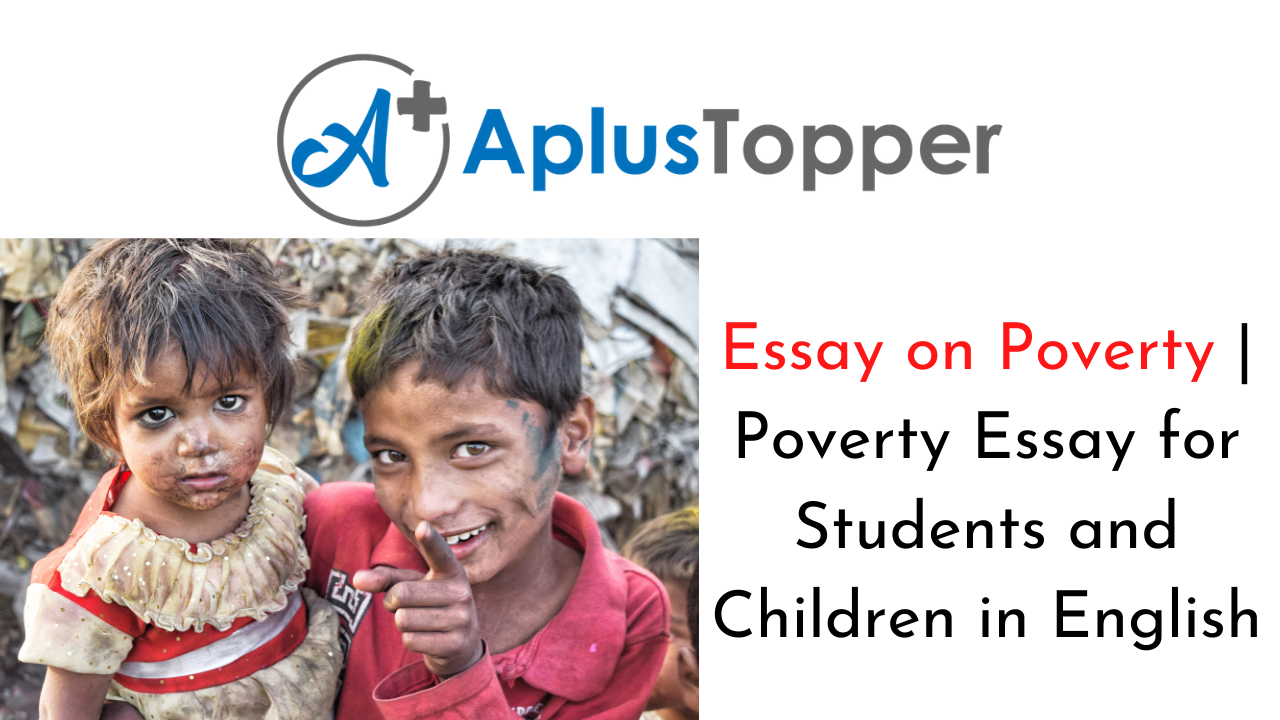 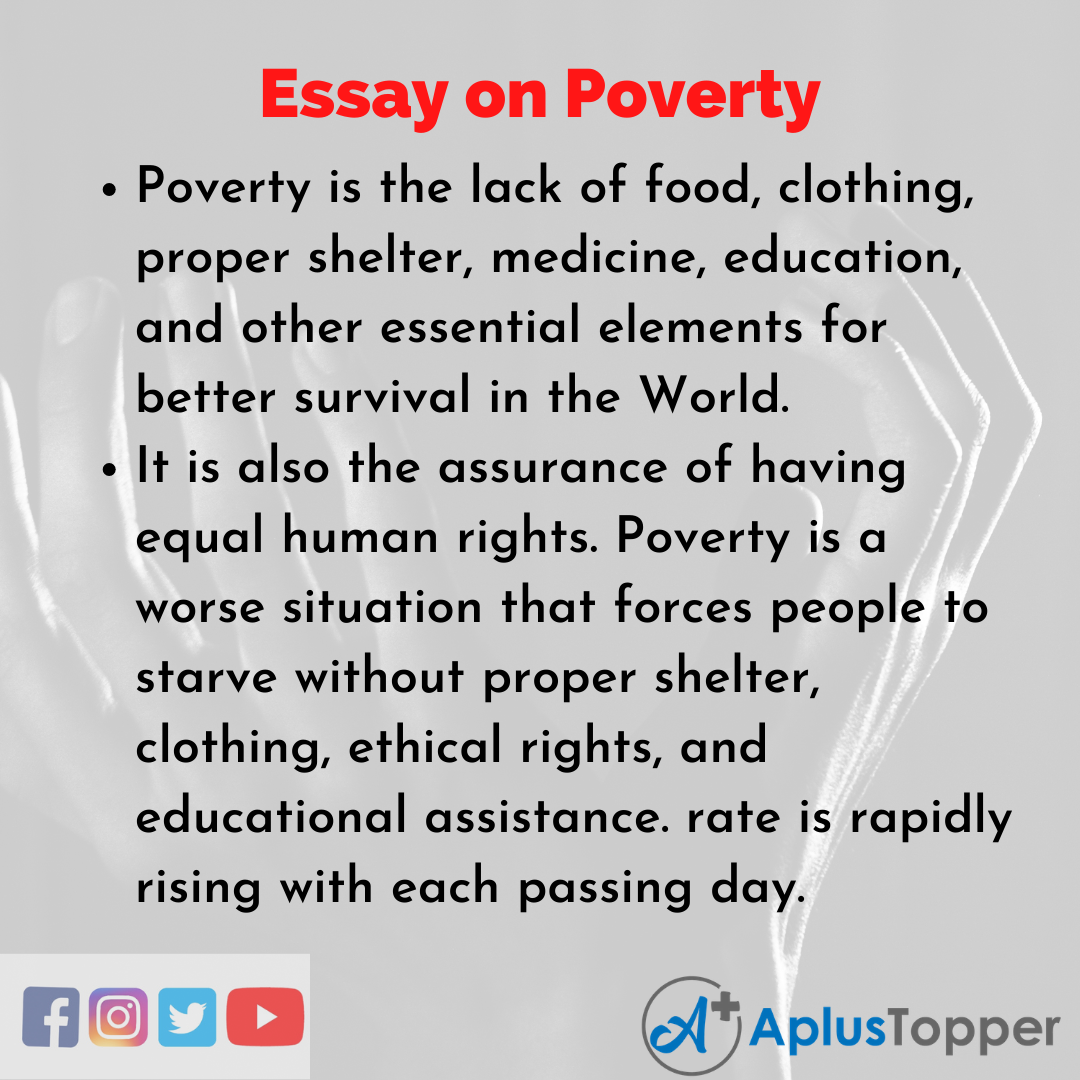 Poverty is a worse situation that represents poor quality of life, rising illiteracy and malnutrition, lack of basic and essential elements of living, lower development of the human resource, and others. This is a more significant challenge, significantly hindering the growth of the developing nations, like India. Poverty is the phenomenon in which a segment of society does not have access to meeting the basic needs of life and have a healthier life. The experts also observe that poverty level is still declining since India’s last five years (reaching 26.1% in 1999-2000 to 35.97% in 1993-1994)

Poverty in India has also declined at the state level rapidly. In Madhya Pradesh, the poverty rate fell from 43.42% to 37.43%. Not only this, but in other states like UP, and Orissa too, the poverty rate has gone downwards. However, even though there is a downfall in the country’s poverty rate, to eradicate it from the routes, we must make use of some effective programs with combined efforts of Government. It is necessary for the Government of the country to formulate effective strategies for developing a socially poor sector of the society using the critical components like population control measures, and primary education made compulsory, employment generation, and others.

Several issues arise due to a higher poverty rate. Illiteracy increases with poverty as people cannot access proper education and get learning resources due to lack of money. Poverty also leads to rising malnutrition as poor people are unable to afford a proper two-time meal and get a nutritious diet to stay healthy. In turn, this leads to increasing illness and diseases that also remains uncured because of lack of medical aid. Due to poverty, families have lower income that is unable to meet their needs, and thus the children are also forced into child labour to meet the demands.

Unemployment is a significant cause of poverty as it leads to a shortage of money and affects the daily lives of the people. It also forces people to work against their will in harmful conditions. Poverty leads to social stress due to inequality in income between the rich and the poor. This also creates a worse issue for people as they have to stay out of their homes on roadways, sidewalks, open spaces, and without any shelter. Poverty is a worse issue that affects people from all the demographics and age group in adverse ways, causing severe losses and stress for them. This is a concerning factor, and only the Government of a nation can come up with practical ways to reduce the poverty rate.

Poverty is an adverse condition in which the people are left without shelter in a depriving state for basic necessities like food, water, clothes, etc. India has a higher poverty rate. A more significant segment of the entire population cannot afford even the two-time meals properly, have to sleep on the roadsides, wear dirty clothes, drink unclean water, and live in unhealthy and unhygienic conditions. Poor people lack access to proper and healthy nutrition, medical aid, educational assistance, and other essential services to better their lives and the lives of their children.

In urban India, poverty is rapidly rising due to the rise in urban population as people from many rural areas are shifting towards the urban ones. As people move in search of employment and a better lifestyle, but lack of employment opportunities forces them into a financially unstable situation where sometimes they are even forced to work under harmful and unpleasing conditions. In India, more than eight crore people’s income is still lower than the poverty line, and 4.5 crore urban people stand at the verge of the poverty level. A more significant number of urban people stays in the slums, and most of them are illiterates.

Despite many initiatives of Government and NGOs, there is still no satisfying effect regarding the lowering of the poverty level. Several reasons lead to poverty like one of India’s significant cause for poverty is the rising population, poor agriculture, lack of employment opportunities, corruption, a wider gap between poor and rich, epidemic diseases, and many more. A more significant per cent of the Indian population depends on the agriculture sector, which is getting poor rapidly. People also face a shortage of food due to poor agriculture and unemployment.

Furthermore, as there is no limitation on having children after marriage, the rising population also leads to poverty. There are more stomachs to feed, and the income cannot satisfy the same for many families. Furthermore, as the basic facilities are not available adequately, many people get poverty-stricken. With this, the poor become extra poor and richer ones get extra rich, widening the gap between both the segments.

Poverty leads to severe impacts ion the entire society and adversely affects the lives of the people. Poverty leads to illiteracy, lack of proper diet and nutrition, child labour, poor lifestyle and lousy sanitization, and other adverse effects. People are often unable even to get a proper two-time meal and clean drinking water, and due to lack of a healthy diet, the children are mostly malnutrition. Children are unable to study and get appropriate education, and thus the cycle of poverty continues in the families for generations. This eventually hinders the overall development of the nation.

For controlling poverty, there are specific measures that we can take to solve the issue for ensuring a better lifestyle for all the people staying on the planet. There are specific effective measures like farmers must receive proper and necessary access to facilities for better agriculture. The illiterate people must get adequate access to education and training to understand several aspects of a better life. People must be given training for family planning and sex education for population control. Every child must go to school, and there must also be new employment opportunities for all type of people. 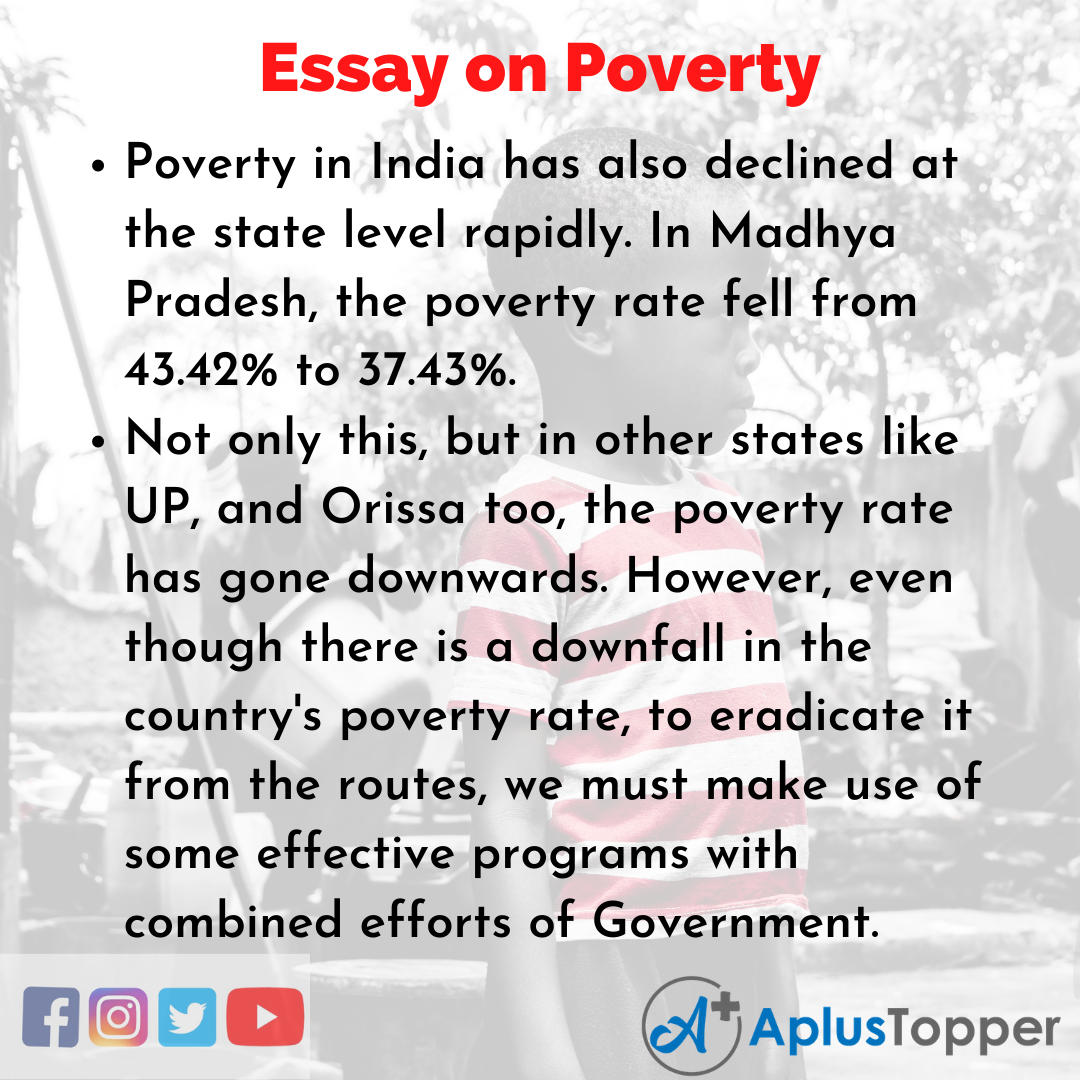 Poverty is not an individual-level problem, but it is a broader issue for the entire nation and the planet. This is a significant threat to human resource development and must be taken care of on a priority basis. People must consider essential and effective measures to control the poverty rate. We must combined work to eradicate all the loopholes in the government systems and encourage the organizations which work to handle the poverty crisis.

The article contains an essay on poverty to satisfy various students’ educational and academic requirements from different classes. This is a concerning factor. The students must understand the issue sufficiently to eradicate the problem and ensure a better and developed lifestyle for all the people Worldwide.