Read below to find two essays about pollution due to urbanisation. The first essay is a long essay of 500 words, and the second is a short essay of 200 words. The former is suitable for class 7-10 students as well as for those aspiring for competitive exams. The latter essay is ideal for kids of class 6 and below.

Long Essay on Pollution due to Urbanisation 500 words in English

Long Essay on Pollution due to Urbanisation in English for classes 7, 8, 9 and 10 and Competitive Exam Aspirants

Below we have given a long essay about pollution due to urbanisation 500 words and is suitable for students of class 7 to 10, and also for competitive exam aspirants.

Urbanisation refers to the concept of rural towns and villages developing into urbanised towns and cities. Urban localities are characterised by having good infrastructure and prevalence of industry, both of which are almost undoubtedly linked to each other. A lot of venture capitalists and multinational corporations select smaller, rural towns to start manufacturing businesses because the factors of production most often come cheaper there. This means that the rent is lower, labour costs less, etc. thus, it makes for a convenient place to open up good-manufacturing factories there. Urbanization has demerits more than merits.

When a factory opens in a rural area, it paves the way for the people living in and around the area to avail employment there. Since there will be many raw material trucks coming in and goods trucks leaving from the factory site, there is a requirement for paved roads. More and more facilities and infrastructure come up around the lands surrounding the factory, resulting in the development of the area. This process is called urbanisation, and it is important to know about so you can understand how pollution due to urbanisation takes place.

Where there is a factory, while a lot of infrastructure and development follows it, there is also a lot of waste produced there. Many factories may not follow the correct procedure for the disposal of waste, which can be dangerous as factory waste can sometimes be toxic. This toxic waste seeps into neighbouring soil, close-by water bodies, and poisonous fumes from the factories into the air. Aside from these forms of pollution, factories can also be noisy due to the machinery used inside. Thus it causes all four types of pollution. In this way, industries produce air, water, noise, and soil pollution due to urbanisation.

While pollution on its own is a pressing problem for our world, pollution due to urbanisation is a huge problem. Adding to that, it is becoming a bigger and bigger problem as urbanisation is taking over even the smallest areas. Yes, development is something to applaud, but not when it goes to the extent of causing harm to or destroying the environment. Short Essay on Pollution due to Urbanisation 200 words in English

Below we have given a short essay about pollution due to urbanisation of 200 words. This long essay on the topic is suitable for students of class 6 and below.

Pollution is a severe problem in today’s world. There are four kinds of pollution (air, water, soil and noise pollution) and they are all dangerous. When there are unwanted objects, smells or anything like that in the air, water, or soil, they are called pollutants. Some examples of pollutants are plastic in oceans, smoke in the air from vehicles, etc.

When industries decide to make factories in rural areas like villages and small towns, they also build good roads and other proper buildings around the factory. This is so that people can do work in factories with ease. When industries do this, it is called urbanisation. Many small towns have become big centres of development and factory work.

The bad part about urbanisation is that the factories which create a lot of pollutants. They release smoke into the air, harmful waste into water streams and surrounding land, and also make a lot of noise because of their machines. Thus there is a lot of pollution due to urbanisation, and it is very harmful to the environment when urbanisation starts.

Urbanisation is the cause of most of the pollution that there is our environment. It is because factories are everywhere, there are many more vehicles on the roads now, etc.

10 Lines on Pollution due to Urbanisation Essay in English 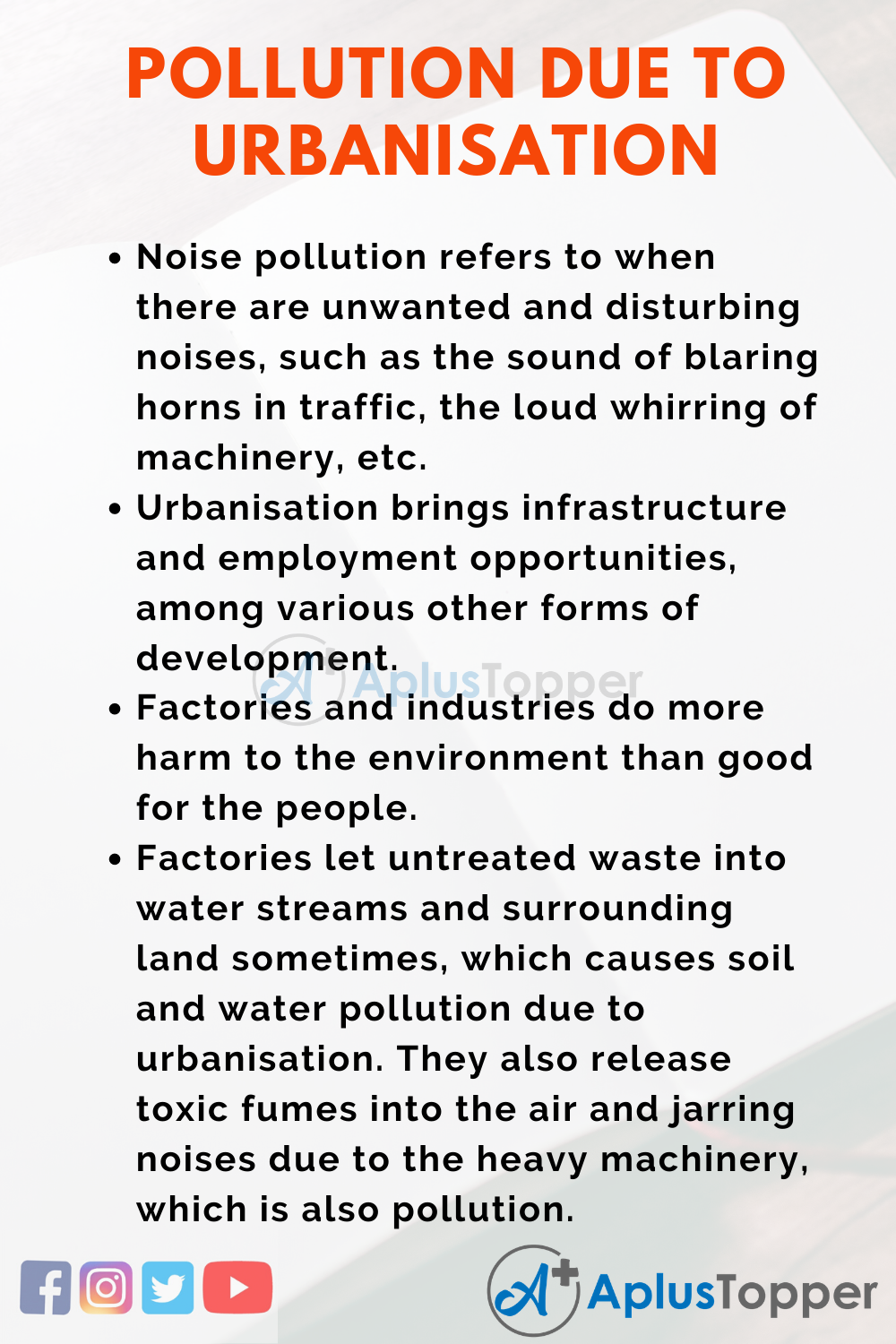 FAQ’s on Pollution due to Urbanisation Essay

Question 1.
What does it mean by urbanisation?

Answer:
Urbanisation refers to the concept of a rural area becoming developed as factories, good roads, good schools, etc. are built there. An urban or urbanised city is one where there are great infrastructure and sizeable employment opportunities.

Question 2.
What does it mean by pollution?

Question 3.
What are the four main types of pollution in simple words?

Answer:
The four main types of pollution are air, water, soil and land pollution – when there are intoxicants in the air, water, or soil, we name them as such, respectively.

Question 4.
How is pollution linked to the concept of urbanisation?

Answer:
With urbanisation, polluting factories come up, more fuming vehicles are on the road and other similar situations. Thus, pollution due to urbanisation is a sad but truthful reality.