Essay On Pollution Due To Fire Crackers: A firecracker is usually used to produce disturbing noise and visual effects in celebrations, contributing to significant air pollution. Firecrackers also cause human body disorders. Some Chinese scientists invented firecrackers. Wrapped with thick coating papers, with gunpowder’s inside help in lighting them. Especially on Diwali, firecrackers are lighted most, increasing the air’s ppm level, thereby degrading its quality.

The chemicals that include sodium, zinc, lead, magnesium, etc. litter the surroundings, including the environment when lighted up. Firecrackers should be banned permanently in the whole world as it degrades the atmosphere also causes health hazards. It should be banned for our safety as it can create dangerous conditions when it is not correctly used or just taken for granted as a plaything by the children for entertainment.

In this article, we are offering students a short essay sample of 150 words and a long essay sample of 500 words on the topic of pollution due to firecrackers for reference.

In many occasions, firecrackers are used to celebrate moments to make it more attractive. Everyone loves the remarkable visions in the sky, which is spectacular. The shows are stunning also. But the impact on the environment as well as on human beings is terrible. There is a need to control the ecological balance and the setting to measure people’s health and protect our nature.

Firecrackers are sometimes burnt in excess. People usually lost their senses while using them. They do not know the significance of their splendid and pleasant nature. During the times of Diwali, people all over India use the maximum number of firecrackers to celebrate the festival at its fullest. This is the foremost gift of air pollution to the environment. They do not realize the extensive harm of using these polluting things. Air pollution and noise pollution run side by side during this time of celebration.

Moreover, on wedding days people burst firecrackers to celebrate the glorious day. Some days back of the wedding day, they started to fire the crackers for enjoyment and excitement. Every year, more than thousands of weddings take place, and the level of air and noise pollution increases after burning millions of firecrackers.

In times of a cricket match, product launch, special events, birthday parties firecrackers are being used to celebrate. Nowadays, during New Year’s Eve, people spend the welcoming year by bursting firecrackers for their enjoyment. This can be seen that firecrackers are the only way to express familiar people’s happiness with the entire world.

Using firecrackers creates a massive impact on environmental protection and on the living of human beings on earth. Several kinds of firecrackers emit various types of harmful gases that are dangerous to humans’ respiratory systems. The gases blur our views of the sky and make it difficult to walk and breathe properly.

Most importantly, the bursting, disturbing sounds of firecrackers can harm the hearing systems of birds and animals. For their sensitive ears, some may have deafness, and some have breathing problems. This is genuinely torture to the living creatures in the earth. We, humans, can tolerate all these and still can survive. But for the poor birds and animals, louder sounds of the firecrackers can create deafness, and at times they get scared by this noise. Humans are brutal in this case.

The biggest threat of using firecrackers is air and noise pollution. Children usually love to play with them, and those can damage their soft skin, eyes and ears. Adults should stay stubborn of not allowing their children to use firecrackers. If the chemicals go through some parts of the human body, it’s a lifetime’s cursing work.

For the welfare of our health as well as our children’s health, we need to start thinking twice about using firecrackers on auspicious events or occasions and thereby, risking our own life and future generation. 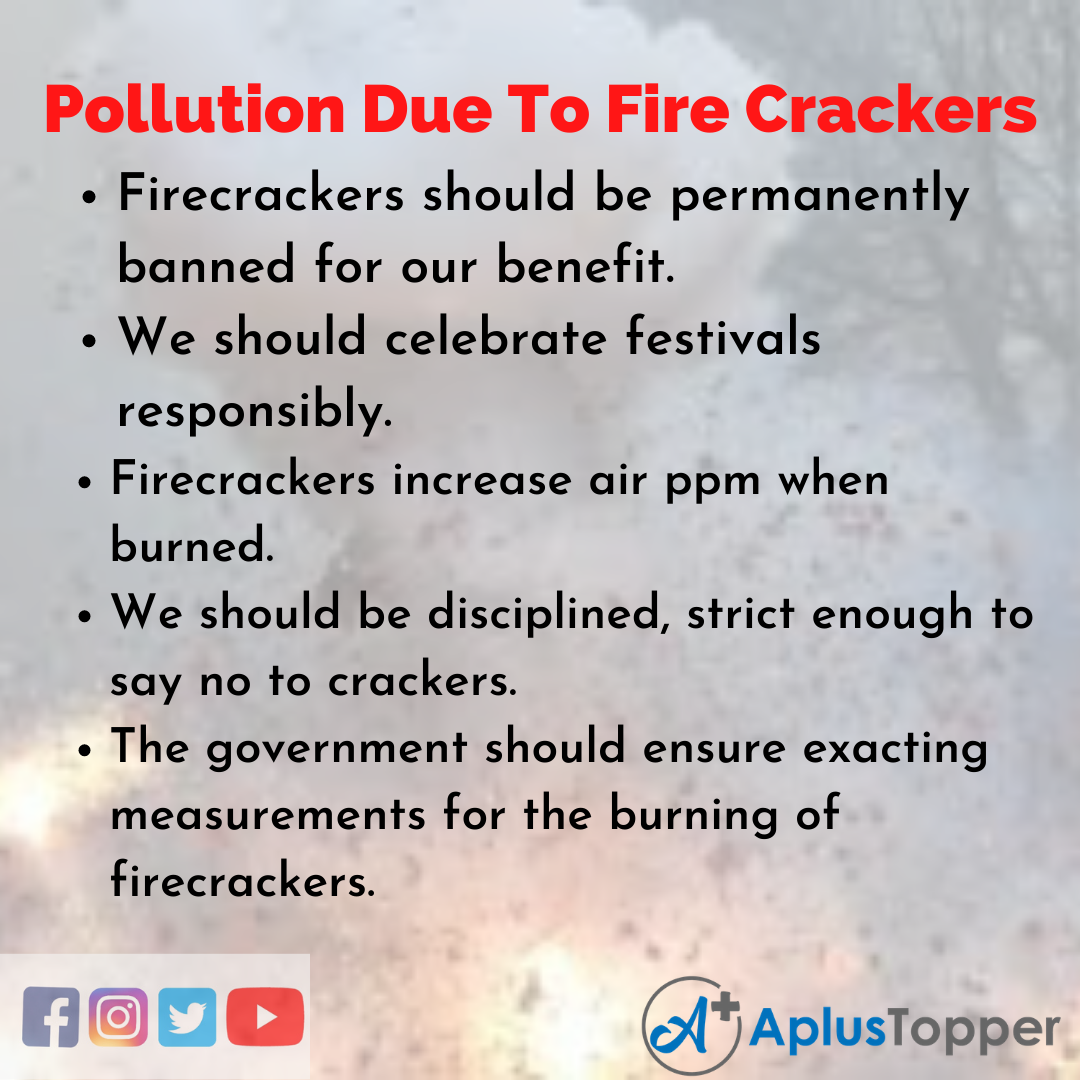 Everyone loves the remarkable patterns that come with firecrackers, because of which they are frequently used to make festivals more attractive and beautiful, even on occasions such as weddings, parties, Diwali, and many more celebrations. Firecrackers area package of air and noise pollution.

The leading cause of air and noise pollution in recent days is mostly the burning of firecrackers. Firecrackersimbalance nature’s beauty and causes numerous disorders in the human body. Without any caution, we are readily available to burn firecrackers in all festive seasons. People nowadays, express their happiness by bursting firecrackers in most festivals, especially Diwali.

The use of firecrackers provides a more significant impact on society as well as on the health of birds and animals. They are indeed very hazardous and risky. We need to look forward to this labyrinth, or else the world will face a severe major threat in the near future.

10 Lines On Pollution Due To Fire Crackers Essay 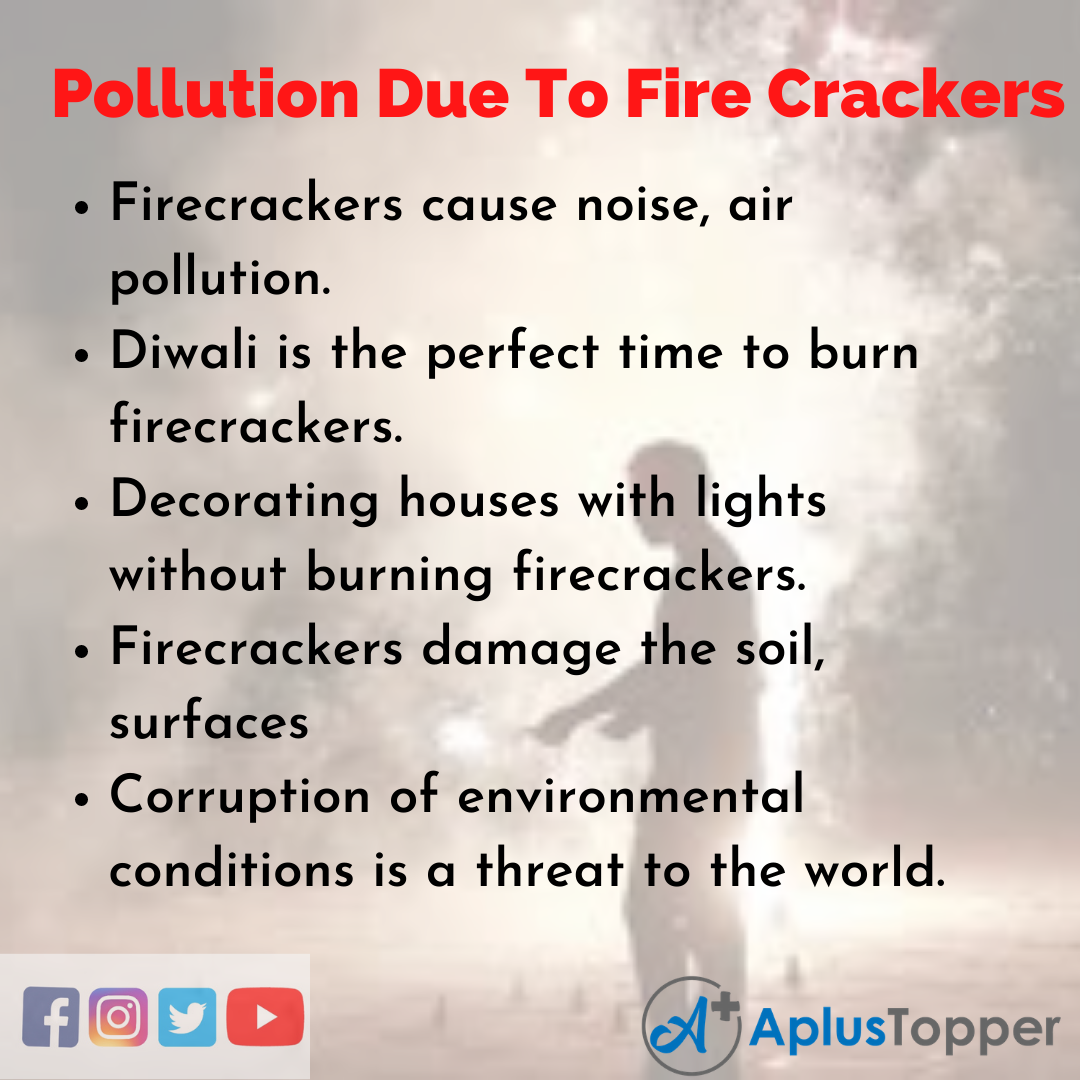 FAQ’s on Pollution Due To Fire Crackers Essay

Question 1.
Which festival creates the most air pollution?

Question 2.
What is the leading cause of air pollution?

Answer:
The leading cause of air pollution is the burning of firecrackers.

Question 3.
What is the health impact of using firecrackers?

Question 4.
Do firecrackers cause pollution?

Answer:
Yes, firecrackers cause extensive pollution in a short time.