Essay on Pollution Due to Diwali: In India, Diwali is an important festival that is celebrated throughout the country. Within this festival, many fun activities occur, including lots of shopping, enjoying lip-smacking food, and burning crackers. Fireworks are an integral part of this festival, but since these are made from chemicals like Mercury or lead, they are harmful to the environment.

We provide students with essay samples on an extended essay of 500 words and a short piece of 150 words on the topic “Pollution Due to Diwali” for reference.

Long Essay On Pollution Due to Diwali 500 Words In English

Diwali is fondly called the “Festival of Lights” in India. Every year during Diwali, all the homes in India are decorated with beautiful lamps, decorative diyas and filled with joy. However, apart from the lights and cheer, Diwali also brings in pollution and lots of smog. During this festival, all the burnt crackers heavily contribute to largescale pollution throughout the country, much more in a few pockets.

Many people believe that one day the burning of crackers will not cause any detrimental effects on the environment. They argue that vehicular pollution, industrial pollution are far more harmful and continuous than crackers which are burnt on a single day.

But there is statistical evidence that burning crackers on Diwali causes pollution, which is similar to the combined polluting effect of vehicles that run for multiple days. Firecrackers are one of the significant reasons for rising global warming and smog.

The primary type of pollution caused by Diwali crackers and fireworks are air pollution. During this time, the already polluted air around us turns deadlier, and the amount of pollutants in the air rises to threatening levels. This pollutant filled air is extremely harmful to breathe.

Cracker burning releases lots of deadly smoke to the atmosphere. This smoke that is emitted is much more harmful than the pollutants released by either vehicles or industries. It removes contaminants to the air that ultimately leads to various airborne diseases. They lead to breathing problems among the children and the elderly.

The pollutants released by the firecrackers can remain suspended in the air for longer durations of time. These pollutants thus pollute the air even after the festival ends. Burning firecrackers are also harmful to various birds and animals. They choke on the deadly smoke and causes their death.

Another type of pollution that is quite prevalent during Diwali time is land pollution. After burning crackers, it is unfortunate to see tons of garbage lying on the streets, and it is these leftover pieces lead to land pollution, and it takes weeks to months to clean them. Most of these pollutants are non-biodegradable, and their disposal is never easy. Thus, over time they turn more toxic.

Thus, preventing this type of pollution is exceptionally crucial in the present times. The best responsible way to do so is by putting a stop to the use of firecrackers. There are many enjoyable things in Diwali, and firecracker burning should not be among them. This type of activity can do a lot of good for the environment around us. Although these steps are relatively small, in the long run, they will indeed create significant differences. 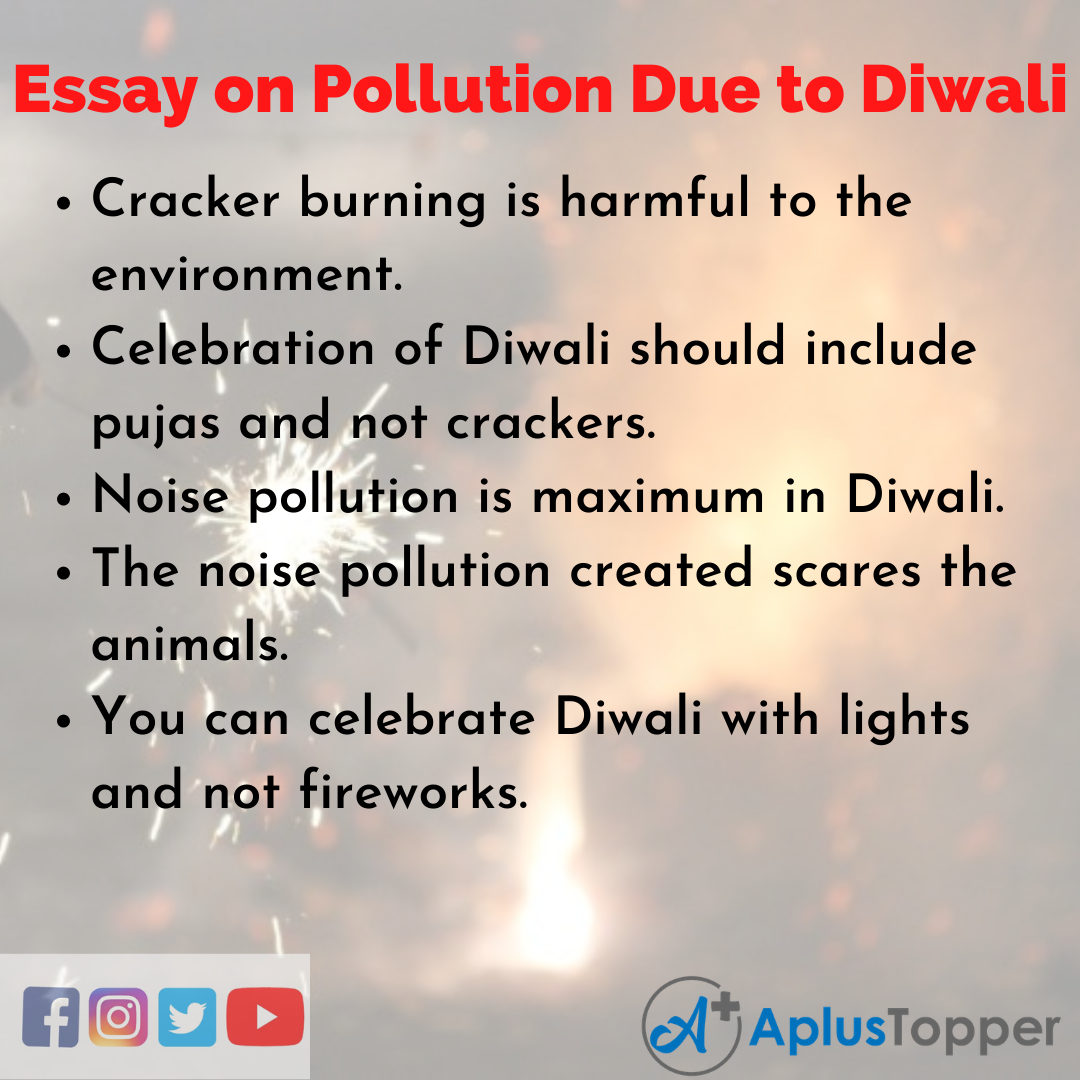 Short Essay On Pollution Due to Diwali 150 Words In English

Lots of crackers are burned during Diwali all over the country. Nowadays, it has become a part of the ritual. It is mostly the children who are most excited about firecrackers, and at times the adults are involved too. But the harm that is caused to the environment is unknown to them.

Such burnings cause a tremendous amount of pollutants to be released to the atmosphere and even the land. There are extreme levels of noise pollution that are created due to bursting firecrackers. These are especially dangerous for the children, elderly and the animals around us. The air becomes unhealthy, and it gets difficult to breathe, and those with asthma or other lung diseases suffer badly.

Diwali is a festival that must be celebrated with lights and not firecrackers full of harmful chemicals. To keep the environment pollution free, it is crucial to understand the need to stop crackers.

Students can also find 10 Lines on Diwali and Paragraph on Diwali from here.

10 Lines On Pollution Due to Diwali In English 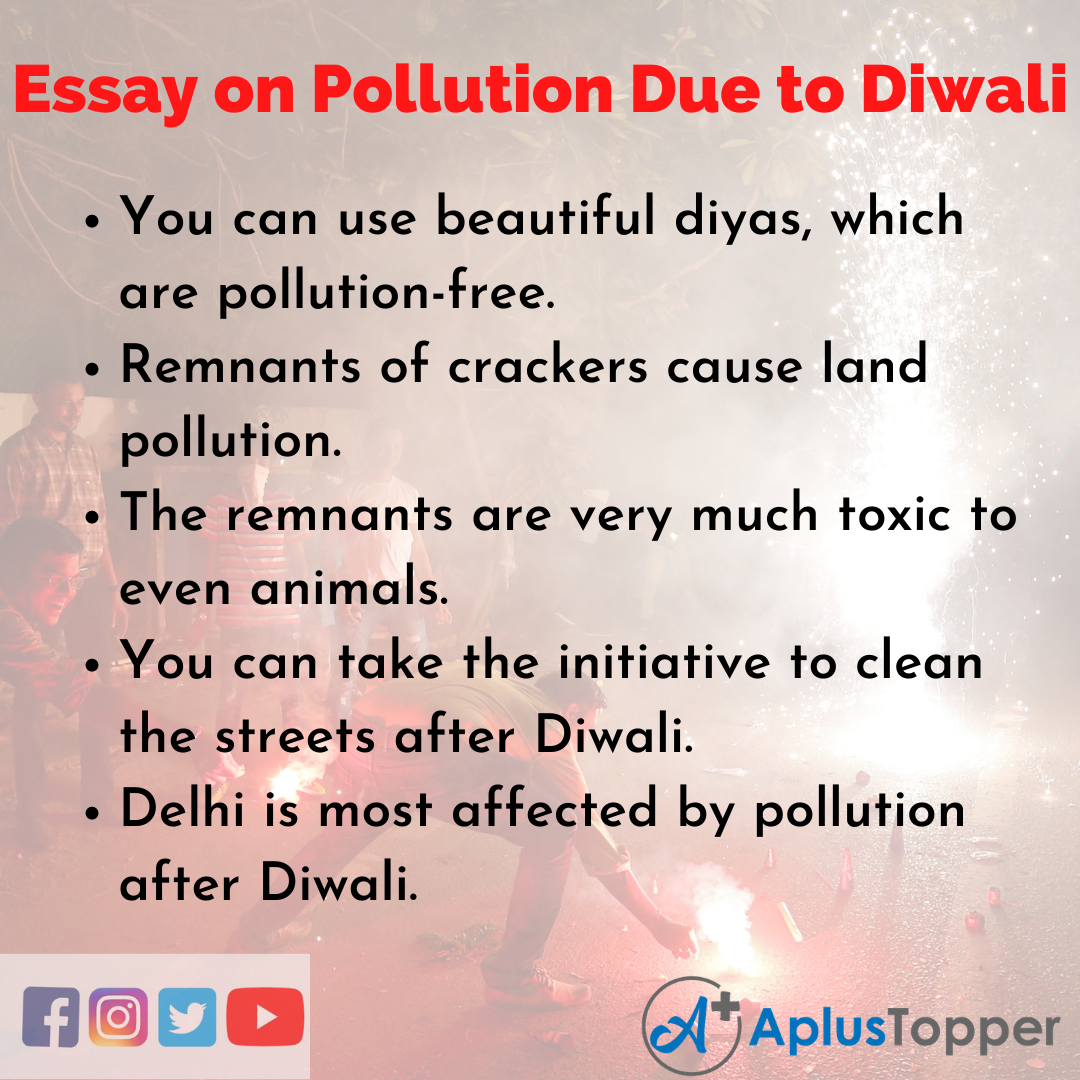 FAQ’s on Pollution Due to Diwali Essay

Answer:
Crackers are mostly made of Sulphur.

Question 2.
How to celebrate cracker-less Diwali?

Answer:
By decorating your homes with lamps or diyas, or by offering pujas.

Question 3.
Who are the victims of pollution during Diwali?

Answer:
It is mostly the children, the elderly and the street animals who suffer.

Question 4.
How do crackers cause noise pollution?

Answer:
The sound of crackers is known to exceed 90 decibels. This is responsible for nervous breakdowns and hearing problems.