Essay on Pimpri-Chinchwad: Pimpri-Chinchwad is a city that is a part of Maharashtra that connects to the Metropolitan city, Pune via the old Pune-Mumbai Highway. The city is a modern area that is highly developed with bold and strong networks of roads.

The area has surged from what was once called the suburbs of Pune due to rapid industrialization that commenced within a decade after India’s independence in 1947. Pimpri-Chinchwad has spread across an area of 181 sq. km and is the historic centre of Pune.

We provide students with essay samples on a long essay of 500 words and a short essay of 150 words on the topic Pimpri-Chinchwad for reference.

Pimpri-Chinchwad is a modern twin city located in the South-East of Mumbai in the North-Western quadrant of Pune. It is the proudly extended city limits of Pune and is a part of the Metropolitan city Pune region.

Pimpri-Chinchwad is formed from three localities of Akurdi, Nidgi, Bosari, Kalewadi, Pimpri, and Chinchwad. The city Chinchwad is derived from the large tamarind (Chinch) tree. The tree is famous for the Saint MoryaGosavi Shrine, a sacred place in Maharashtra, and every year this river gets submerged due to the flooding of the river Pavana.

Many worldwide nomenclatures know Pimpri-Chinchwad. The place is widely known as Industrial Township, and with the presence of several national and multinational automobile companies, it is also recognized as the Detroit of the East.

Pimpri-Chinchwad is also blessed with a rich cultural heritage and history. Many freedom fighters like Halbe and Chaphekar were born in this place. ShriChaphekar played an active role in India’s freedom struggle against the oppressive British rule.

The township is also famous as the birthplace of Ganesh devotee and Saint MoryaGosavi – his holy tomb is located in Chinchwad. King Bhoj was the ruler of this township two thousand years ago. Bhojapur was the capital of his erstwhile empire, which today is known as Bhosari.

Situated at the height of 530 ft. above sea level, the township is blessed with a beautiful climate throughout the year. Archaeologists excavated one of the monuments of interest in the township is the 200-year-old ‘Artist Temple’ and ‘Artist Mahal’ located in Bhosari or the erstwhile Bhojapur. The artists’ residence that was performed at the Artist Mahal was three kilometres away from the capital city.

The Pimpri-Chinchwad Township during AD 850 to 1310 was also a part of the Yadav Dynasty. Many sculptures of people who lost their lives in relics and wars related to this ancient past have been found.

Tourists have many ancient spots to visit, such as the ancient temples of Lord Khandoba, veer Chandoba, Mhasoba, and Saraswati. The village of Bhosari has a history dating back to the era of Gautam Buddha. Pimpri-Chinchwad has other places of interest, such as Khandoba Mahal, the house to the temple of Khandoba.

Lakhs of Pilgrims every year visit the temple town of Alandi near Bhosari. They also pray at the Samadhi or tomb of most revered Saint Dnyansehwar. Pimpri-Chinchwad has many devotees of Lord Ganesh. Every year, people from all over the nation come to the township to visit the great priest’s tomb and Ganesh devotee, Moraya Gosavi.

Pimpri-Chinchwad holds the record of a large number of industrial establishments. The township typically experiences three seasons, summer, winter, and monsoon. Pune is one of Asia’s major industrial hubs, and many of the industries are located in PCMC (Pimpri-Chinchwad Municipal Corporation) limits.

The PCMC now serves as home to many Indian operations of some major automobile companies. The limits of PCMC and the cantonment areas of Khadki, Camp, and Dehu Road together form the Metropolitan city Pune’s urban core. 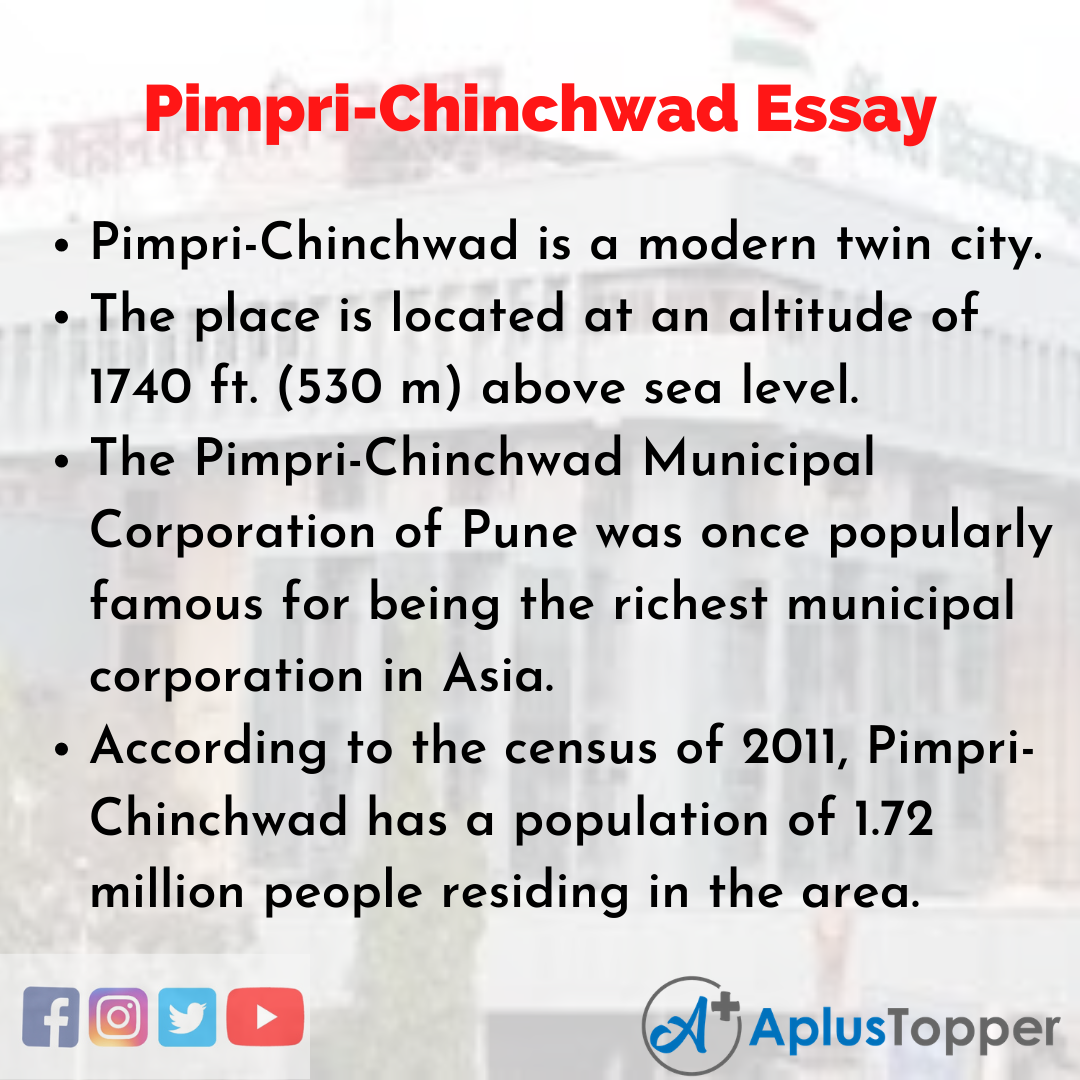 Pimpri-Chinchwad is the twin cities located in Pune, serving as the extended limits of the Metropolitan city. It is also known as Bhosari’s historical place, which was known as Bhojakata during the Mahabharata period.

Pimpri-Chinchwad became the ideal choice for development during the medieval period. During the 1960s, Maharashtra Industrial Development Corporation (MIDC) started with its industrial work by purchasing lands and building roads. After this, the township has seen tremendous development in mechanical, automobile, Pharmaceutical, and many more.

10 Lines on Pimpri-Chinchwad Essay in English

1. Pimpri-Chinchwad is a modern twin city.
2. The place is located at an altitude of 1740 ft. (530 m) above sea level.
3. The Pimpri-Chinchwad Municipal Corporation of Pune was once popularly famous for being the richest municipal corporation in Asia.
4. According to the census of 2011, Pimpri-Chinchwad has a population of 1.72 million people residing in the area.
5. The Maharashtra Industrial Development Corporation (MIDC) has its base situated in Bhosari.
6. There are three significant rivers Pavana, Indrayani, and Mula, flowing around the area, making the city a green area.
7. Some writings on stone have been found in the township that dates back to the tenth century.
8. The name Chinchwad has been derived from the large tamarind (Chinch) tree.
9. The centres of the twin cities are at a distance of 15km apart.
10. The area within the city limits of Pimpri-Chinchwad is considered ‘flat’ given to its altitude. 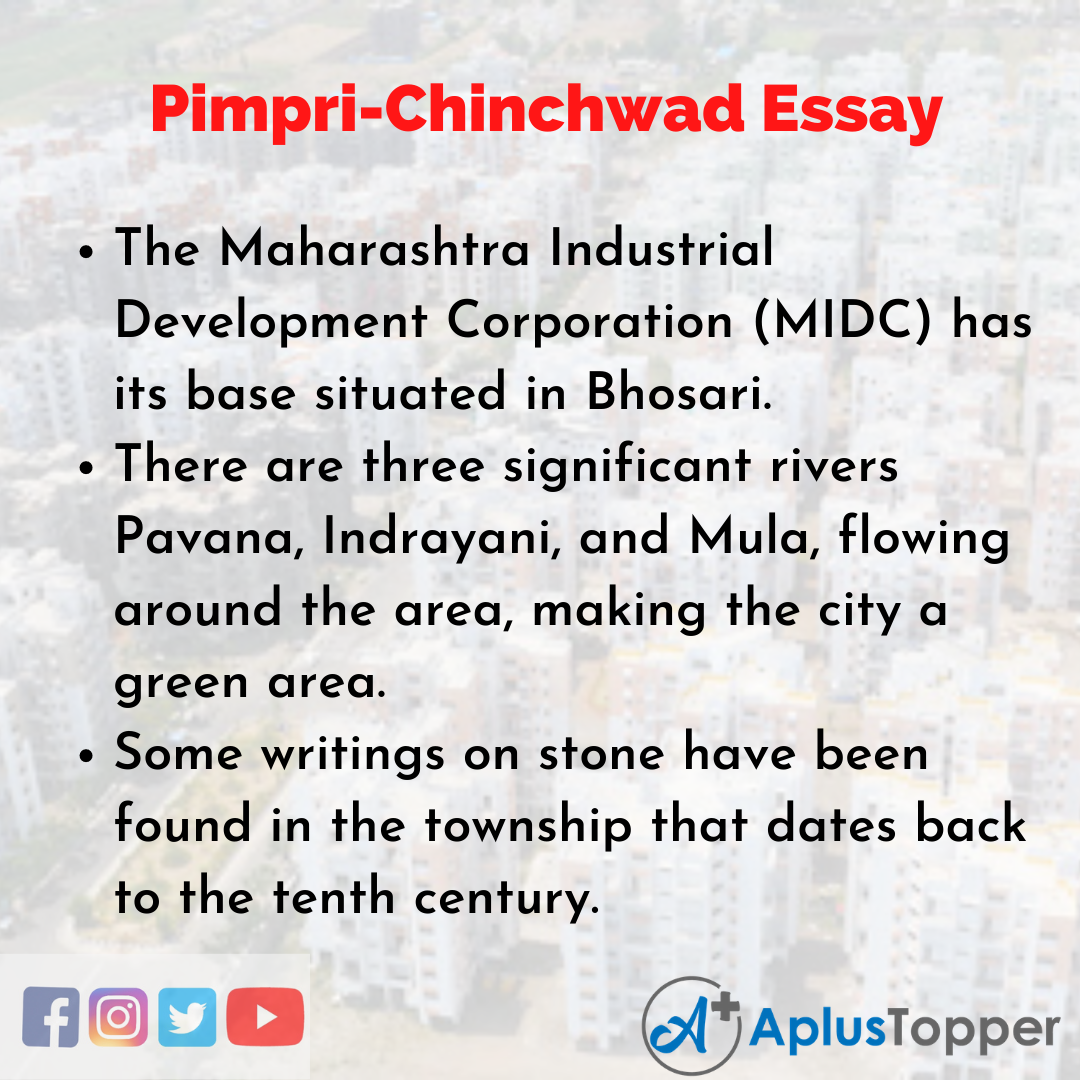 Question 1.
When was Pimpri-Chinchwad established?

Answer:
Pimpri-Chinchwad was established on the 11th of October, 1982.

Question 2.
Talk about the gateway of Pimpri-Chinchwad.

Answer:
The village of Pimpri-Chinchwad has a 14 ft. high gateway entrance. In 1855, the Bombay gazette noted its existence.

Question 3.
What is Pimpri-Chinchwad well known for?

Answer:
Pimpri-Chinchwad is well known for its manufacturing and automotive industry, making Pune city the automobile manufacturing hub of India.

Question 4.
How far is Pimpri-Chinchwad from Mumbai?

Answer:
Pimpri-Chinchwad is located at a distance of 150 km from Mumbai.