Essay on Organic Food: Fresh foods produced using organic farming methods are called Organic foods. These are foods that are free of synthetics such as pesticides and chemical fertilizers, which are commonly used. Organic foods include fresh produce, meats, dairy products, and processed foods such as drinks, frozen meals, etc. Organic foods are processed only using organic methods and not in industries or using genetic engineering techniques.

Even though organic foods are priced higher than conventional foods, organic food has grown significantly since the late 20th century. People tend to disregard the higher price of organic foods for their nutritional benefits. Organic foods also have an environmental benefit as they do not use harmful pesticides and fertilizers to increase their yield.

Given below are long and sort essays to provide you with a better picture of what organic foods are and also what impacts does it have on the environment, society, and the health of the consumers.

Organic foods are grown without any chemical pesticides or fertilizers and maintaining the farming standards of organic farming. The criteria vary globally depending upon the regulatory authority, but the essential characteristics are the same such as promoting ecological balance, conserving biodiversity, and use of naturally available resources only. You can directly get fresh farm produce directly from your local farmers.

Organic food has health benefits as well as environmental benefits. Organic farming uses only natural fertilizers such as compost or manure, which helps to increase the nutritional value of the food and also improves the soil contents. As no synthetic fertilizer or pesticide is not used, the consumer’s health is not compromised to make more profits. It also reduces pollution and soil erosion. Furthermore, it uses less water to grow.

Organic food is often produced on a farm near to where it is sold, which implies that the produce is fresh and free from synthetic preservatives. Organic farming involves raising livestock without using antibiotics or growth hormones using natural methods such as rotational grazing, a healthy diet, and clean living conditions. The market and demand for organic in the last decade have grown exponentially.

Organic foods are produced using natural methods of farming without using chemical fertilizers, herbicides, or pesticides. The residues of the synthetic fertilizers commonly used in agriculture remain on or in the food we eat, which pose a significant health risk to consumers. The conditions in which industry-raised animals live and the feed they are given, and antibiotics and growth hormones are risky for the animal and the consumers consuming their meat or by-products.

Organic farming uses natural fertilizers, such as manure. It follows an entire system to maintain an ecological balance. The weeds are controlled using natural methods such as crop rotation or hand weeding rather than chemical herbicides. The growth of the organic foods market since the 20th century is because people are now more aware and careful of where they are obtaining their daily necessities. People need assurance about how it was produced and the conditions under which it was processed. Also, as organic foods’ production methods are environment friendly, their popularity among consumers has increased.

The authority responsible for certifications for organically produced foods maintains standards that vary depending upon that particular region’s rules and regulations. Organic farms exist all over the world, and they often sell their produce locally, and as global demand for organic foods increased, producers began to sell their products internationally as well.

As organic foods are priced higher than their traditional counterparts, due to more labour costs, certification costs, and low yield, there exists unequal access to organic food. According to studies, there is a relationship between wealth, education level, and organic foods purchase. Moreover, farmers in developing countries are forced to produce organic food for the sole purpose of exporting it to wealthier and developed nations. This leads to an increase in food insecurity in developing nations. 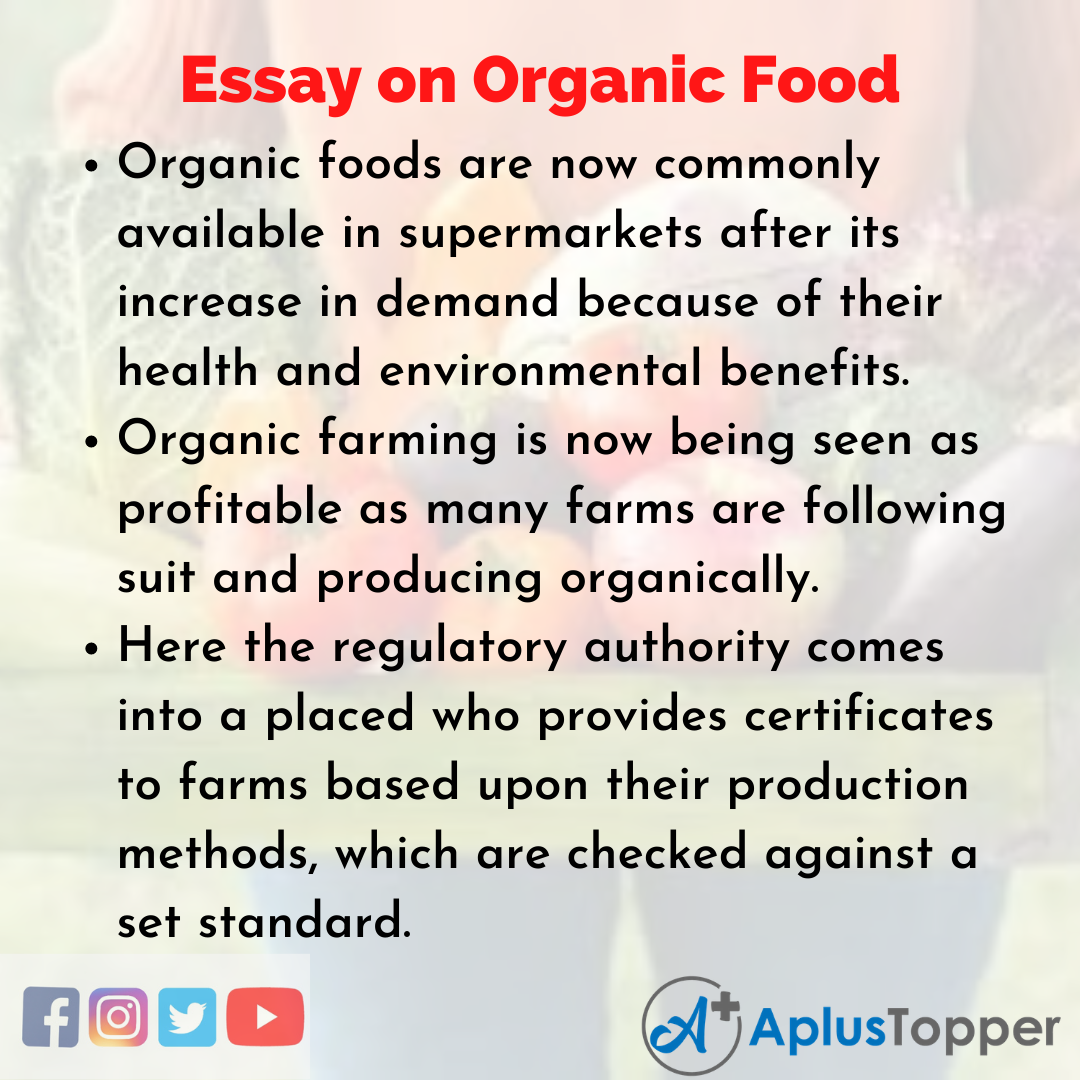 Organic food is the umbrella term for agricultural, meat, and dairy products that are grown using natural methods without the use of any synthetic processing. Organic foods are perceived to be healthier because they are free from any of the synthetic pesticides, fertilizers, or herbicides commonly used to increase crop yield. Only natural fertilizers such as manure or compost are used in organic farming. It also includes processed foods, which were produced only using organic or natural farming methods. Buying organic foods at local markets will also support your small scale farmers financially, and you will get fresh farm produce directly.

Organic foods are now commonly available in supermarkets after its increase in demand because of their health and environmental benefits. Organic farming is now being seen as profitable as many farms are following suit and producing organically. Here the regulatory authority comes into a placed who provides certificates to farms based upon their production methods, which are checked against a set standard. The set guidelines differ globally and include pointers like circular use of resources, ecological balance, and natural resources conservation.

The growth of the market for organic foods is due to its growing popularity among consumers who believe in its superior health benefits and environmental benefits. To get that sense of security of safe and healthy food, consumers are now willing to spend more money on that assurance. The increased price but then limits the affordability only. Also, the popularity of organic foods is higher among wealthy individuals who can afford them easily.

Organic foods also translate to animal welfare, where they are subject to humane treatment. They are not given any antibiotics or growth hormones but are instead grown naturally and in clean conditions. Organic farming also has some environmental benefits. It prevents soil erosion, uses less water, reduces pollution, increases soil fertility, and uses less energy.

According to studies, organically produced meat and milk has better nutritional value than conventionally raised ones, due to their better feed and better living conditions. Also, organic farming is free from any genetic modification or use of genetic engineering to make them resistant to pesticides. Organic foods do not use preservatives to make them last longer as they are sold at a nearby marketplace as quickly as possible while it is fresh. Conventional foods pose a significant health risk, and organic food is free from almost all of them.

Organic foods are produced using a system of ecosystem management and not external agricultural inputs. It considers the environmental impacts of the methods and therefore does not include the use of any synthetic fertilizers, herbicides, pesticides, veterinary drugs, genetically modified seeds, or preservatives. Organic foods are very often locally grown foods. Even though now organic food is available at supermarkets, there is some additional benefit of buying it from your local markets. Directly buying from a small scale farmer will help them financially. Also, you get fresh produce straight from the farms without any added preservative or synthetic chemicals.

Some of the fruits with a higher pesticide level and should be brought organic are- apple, kale, bell peppers, cucumbers, celery, peaches, potatoes, spinach, strawberries, and grapes, tomatoes, and hot peppers. Consumers should try and buy organically grown meat if possible, due to the poor conditions and methods of raising animals by feeding them corn, grains, antibiotics, growth hormones, animal by-products, etc. These have a significant health risk for the animal and the person consuming their milk, meat or egg.

Organic foods are priced higher than conventionally grown food due to the more labour-intensive work, the cost of certification, and reduced crop yield as no chemical fertilizer is used to increase production in the short term. Due to this price difference, only a few sections of society have access to organic food. This is being improved slowly as the growth of the organic food industry has increased as demand for organic foods is ever increasing.

Organic farming promotes sustainability over the long run. The aim is to maintain an ecological balance, soil fertility, and prevent and pest problems. The approach taken is proactive. Using methods such as crop rotation, inter-cropping, symbiotic associations, use of manure, and minimize tillage which encourages the soil fauna and flora. The groundwater which often gets polluted due to the use of synthetic fertilizers and pesticides is conserved. Organic farming can also act as a restorative method of farming to promote the biodiversity of the region by improving the air quality and reducing climate change.

The production of organic food has also brought about societal impact and changes. Due to the increasing demand for organic food in developed nations, some lower-income countries produce organic food just for exporting it to other nations. The people in these countries might not be able to buy organic products, which lead to food insecurity. Also, food processing companies prefer to buy from one big farming operation that limits the participation of small farmers in these markets. 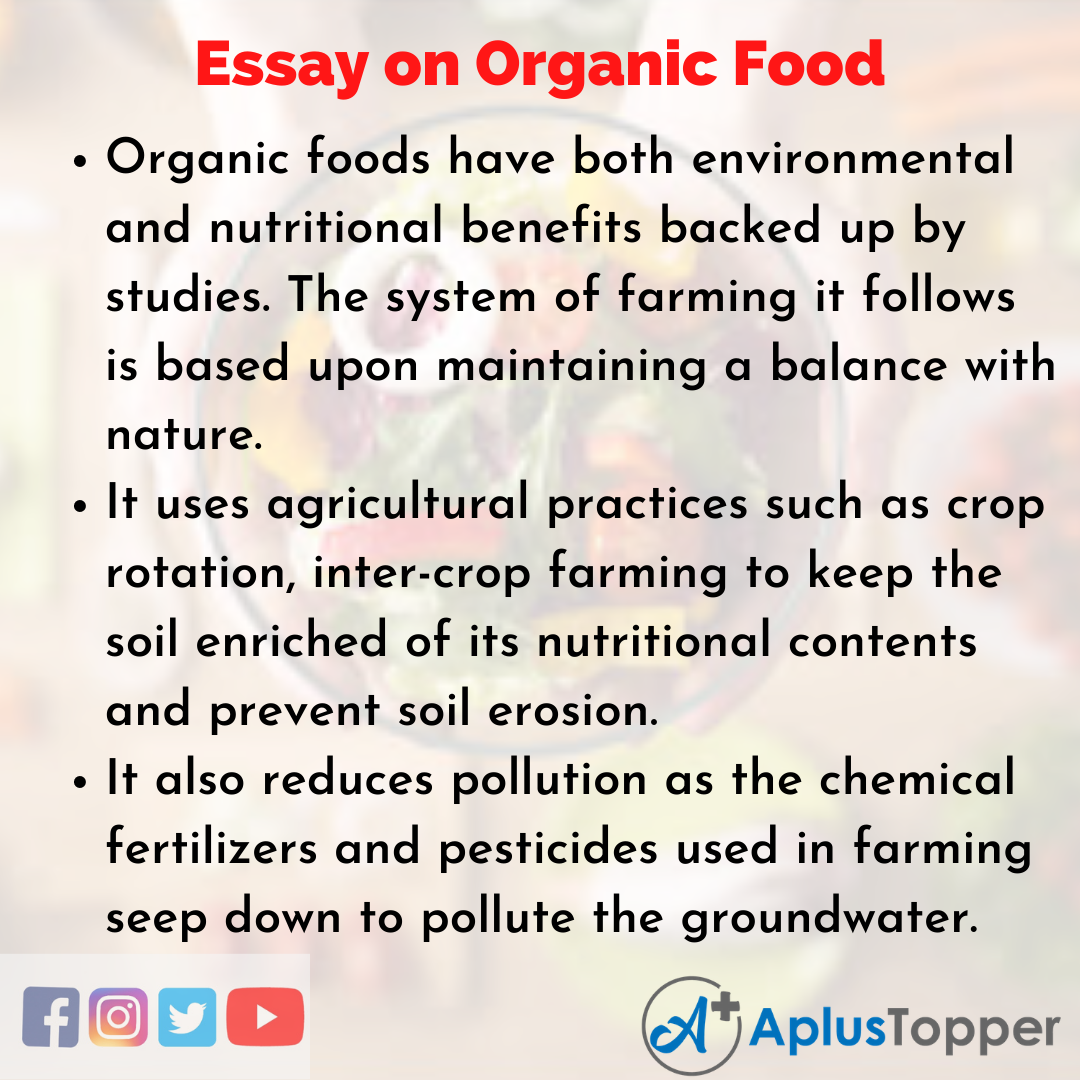 Organic foods have both environmental and nutritional benefits backed up by studies. The system of farming it follows is based upon maintaining a balance with nature. It uses agricultural practices such as crop rotation, inter-crop farming to keep the soil enriched of its nutritional contents and prevent soil erosion. It also reduces pollution as the chemical fertilizers and pesticides used in farming seep down to pollute the groundwater. The demand for organic food is increasing, which will lead to an increase in organic farming practices. The essays contain detailed information about the same.