This city is also famously referred to as the Tiger Capital of India. Since it plays the role of linking several Tiger Reserves in the country to the world, it is considered one of the important cities for Maharashtra IT.departments. It is also known to be the 12th most safe city across the country.

We are providing students with essay samples on a long essay of 500 words and a short essay of 150 words on the topic Nagpur for reference.

Nagpur city is present under the state Maharashtra in India. This city is known to be the third-largest town throughout the state. It is quite famous for the production of oranges. Besides, Vidarbha, it is considered to be the most vital and biggest city.

Nagpur is also known to be a highly populated town in the country. The literacy rate of the city is also quite high; it ranges up to 91.92 percent. Besides, this city is gradually changing into a smart city. It is popularly known for being the annual location for the Vidhan Sabha’s winter meetings of the state.

There are several amusing factors of the city, including the textile mill, which is considered the first mile of the entire county. Ratan Tata initiated this mill in Nagpur. Besides, the main and only National Fire Service College of India is also situated in Nagpur.

After Shanghai, the only similar facility is the MRO facility built by Boeing in this city. Besides, the airport also became the first ISO certified across the entire country. The centre of the Hindu Nationalist Organization or RSS is also considered to be Nagpur.

For the Dalit Buddhist Movement, Nagpur is considered to be a very crucial centre. It is also referred to as the Deekshabhoomi; it is one of the biggest stupas present across the world. More than 50,000 people, along with B.R. Ambedkar, chose to convert to Buddhism in Nagpur. It has been termed as the very first largest religion conversion.

In the year 1703, this city was established by Buland Shah and the Gondas of Deogarh. Under the rulership of the Bhonsle dynasty, it became a portion of the Maharastra Empire.

Nagpur is well-known for its diverse and rich culture and background. The people in this city normally use the language Hindi and Marathi. Besides, all the festivals and cultures are abided by or celebrated with extreme joy and contentment.

Numerous cultural occasions are going on in the city, conducted by literary societies. Some several glorious folk-dances and fairs are arranged in Nagpur. Thus, this city appeals to a huge number of visitors with its charm and beauty.

The famous places like Gavilgad Fort also play an important role in attracting more visitors. This city is also popular for its purely natural Salt Lake, i.e., Lonar Lake. It is considered to hold third place in the list of natural salt lakes throughout the world.

Nagpur is also well recognized for its mouth-watering delicacies amongst which, poha takes the top spot. The name of poha in Nagpur is different that is Tarri Poha.

Nagpur is widely famous for the festival celebration, like the Ramjanam rath yatra and Marbat. People across the globe enjoy these festivals. Therefore, travelling to Nagpur during this season is very pleasant and filled with enjoyment.

Besides, the festival Marbat is primarily celebrated only by the people residing in the Nagpur region.

There are also numerous widely popular movie theatres in this city. Amongst these, the Marathi theatre is considered to be the oldest regional movie theatre across the country. 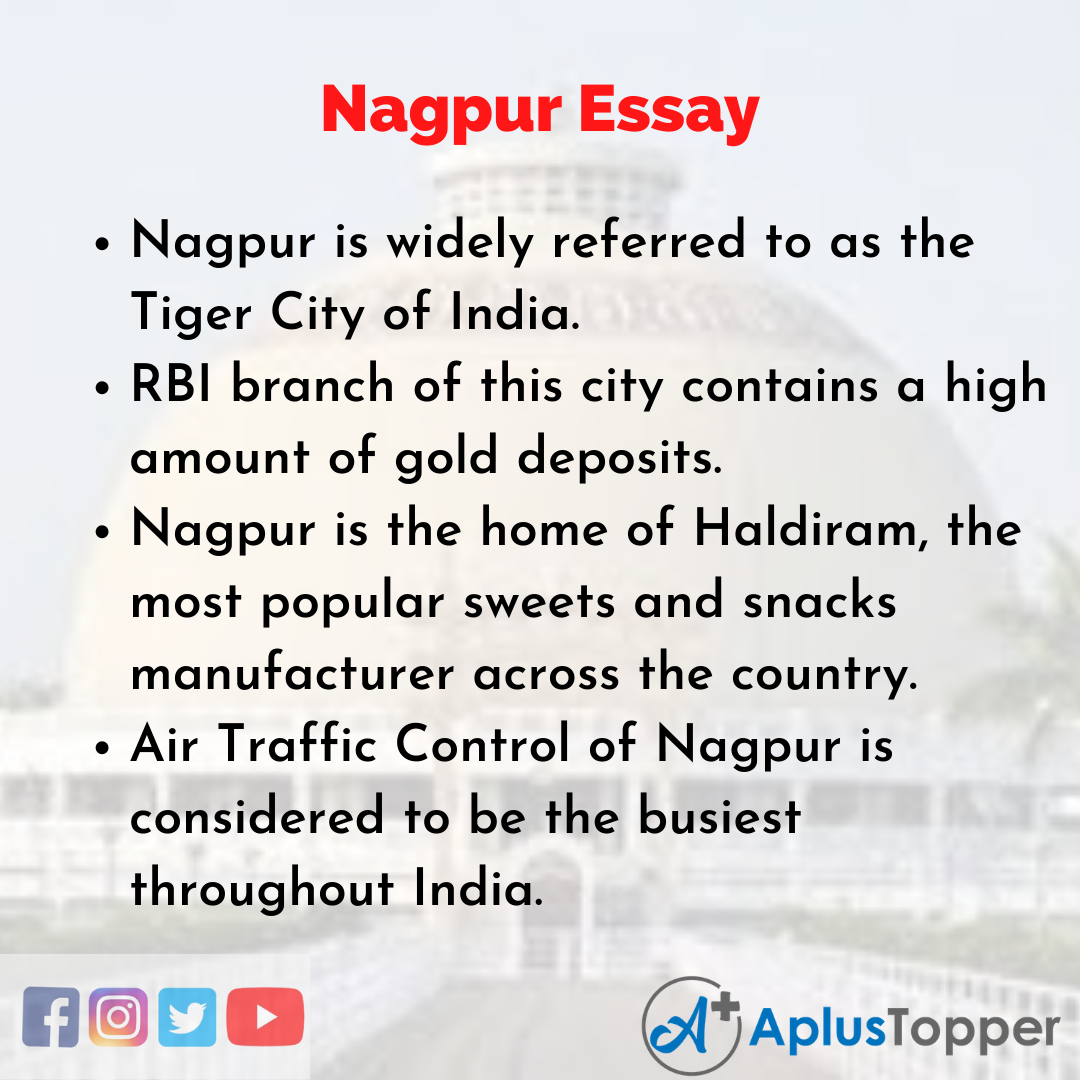 Nagpur is a city that is considered as winter capital for Maharashtra. This city has a population of around 50 million. It is famous for its cleanliness and has been given the number one rank in terms of clean cities.

Moreover, it is ranked 2nd for the greenest city in India. It has a seat for the winter session of the “Vidhan Sabha” assembly of this state each year. Besides, Nagpur is well-known for its political and commercial centres of the region Vidarbha in Maharashtra.

Nagpur is also well-known with another name, i.e., “Orange City.” This is because of all the centres of trade-related to the cultivation of oranges.

This city was established by “BhaktBuland” of the Gond tribe, a prince for the 18th century first half. It lies dead at India’s central mark, which is known as the “Zero Mile marker.” It consists of 12 Assembly segments and 14 Talukas in Constituencies.

10 Lines on Nagpur Essay in English

1. Nagpur is widely referred to as the Tiger City of India.
2. RBI branch of this city contains a high amount of gold deposits.
3. Nagpur is the home of Haldiram, the most popular sweets and snacks manufacturer across the country.
4. Air Traffic Control of Nagpur is considered to be the busiest throughout India.
5. Night Air Mail Service” available in the Nagpur Airport.
6. One of the biggest hollow stupas present across the globe is known as Deekshabhoomi.
7. The literacy rate of the city of Nagpur is quite high, i.e., around 93.13%.
8. Nagpur’s railway station is considered to be the busiest in India, with a halt of 160 trains.
9. This city is said to have started the first green bus service in India.
10. Nagpur is also referred to as the city of orange. 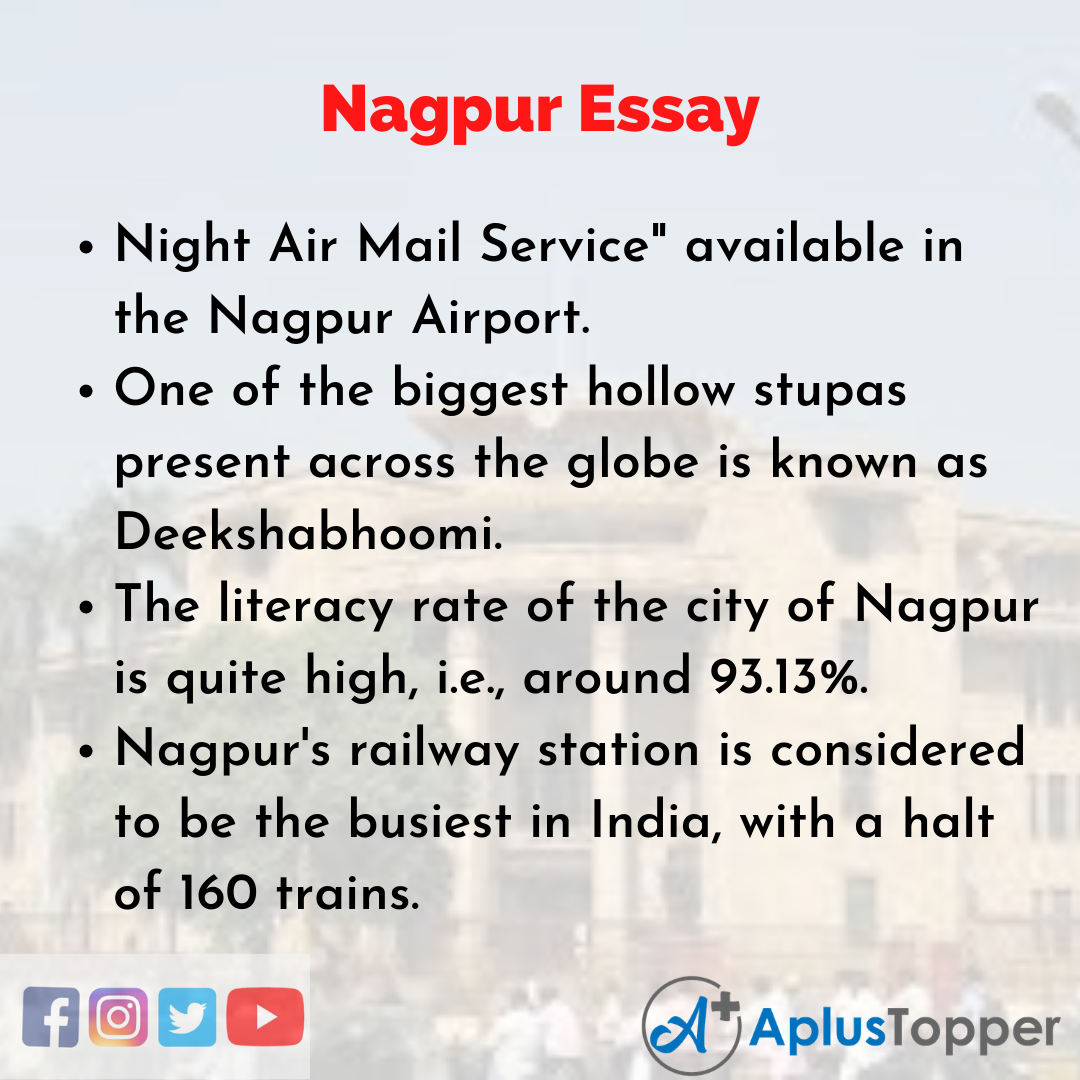 Question 1.
What are the things that are popular about Nagpur?

Answer:
Nagpur is considered to be one of the best historical spots across the state.

Question 2.
When is the best suitable time to visit Nagpur?

Answer:
It is best to travel to Nagpur from October to March due to the pleasant weather.

Question 3.
What is the most famous food present in Nagpur?

Answer:
In this city, you can get rich quality mangoes. It is also known for poha and SaojiMjutton.

Question 4.
What are the places known to be highly famous in Nagpur?

Answer:
The places such as Futala Lake, Ambazari Lake, and Deekshabhoomi are famous.