Long Essay on My Favourite Subject 600 Words in English

My favourite subject at school is physics. Being one of the toughest subjects of all, I always prefer studying for physics than any other subject because of the fact that it is challenging, interesting and helps me build my career as a physicist. My inspiration to become a theoretical physicist is Albert Einstein. A not so academically inclined student from a humble background who went on to change the way we see the world is what inspires me. There various other people in the field of physics who has been my inspiration to become a scientist, some of them are CV Raman, Isaac Newton, Thomas Alva Edison, Nikola Tesla and most recently and the most popular scientists of all, Steven Hawking.

I consider these people as my source of inspiration because they have dedicated their entire lives for science and have discovered many things that have helped this world become a better place. From inventing the atomic bomb to discovering a black hole in the universe, physicists and scientists studying it know no bounds.

I particularly love physics because of the real-life impacts it has on our lives. Science is the only subject that has the potential to solve many problems in the world like water problem, climate change, distress and medical problems. Given the gravity of the impact that science has on our lives, I could not turn my eyes away from studying it. I specifically fell in love with physics in the branch of science because it includes the aspects of both mathematics and chemistry, my other two favourite subjects in school.

I always happen to score well in these subjects because I love studying them and no one has to force me into studying. I find subjects like geography or history boring and I would rather study physics on my own than being forced to study other subjects like civics, history or moral science. I understand that our education system is designed such that all subjects, irrespective of whether we like it or not, are stuffed into our brains. I study other subjects only to pass and get a good overall grade, but ultimately the main subject I’ll be studying in under graduation and post-graduation is physics.

The only reason I study other subjects is to score good overall grades because I want to do further studies in the field of physics at Harvard University. And to get into this university, my overall grade in school should be good. It’s not only about grades, this university looks into our extracurricular and co-curricular activities as well as a part of the admission process. Being only a book worm will not get me into this prestigious university. I should be an all-rounded achiever in all spectrums such as sports, arts and culture. I participate in my school sports activities and have won a few awards. I also take acting lessons in mime because I find it interesting.

Other than physics,  I love chemistry, maths and to a certain extent biology. Infact, my parents want me to become a doctor which means biology should have been my subject of interest. Although I love the subject and also love the job of the doctor, I believe a scientist plays a greater role in shaping our society than any other professionals. 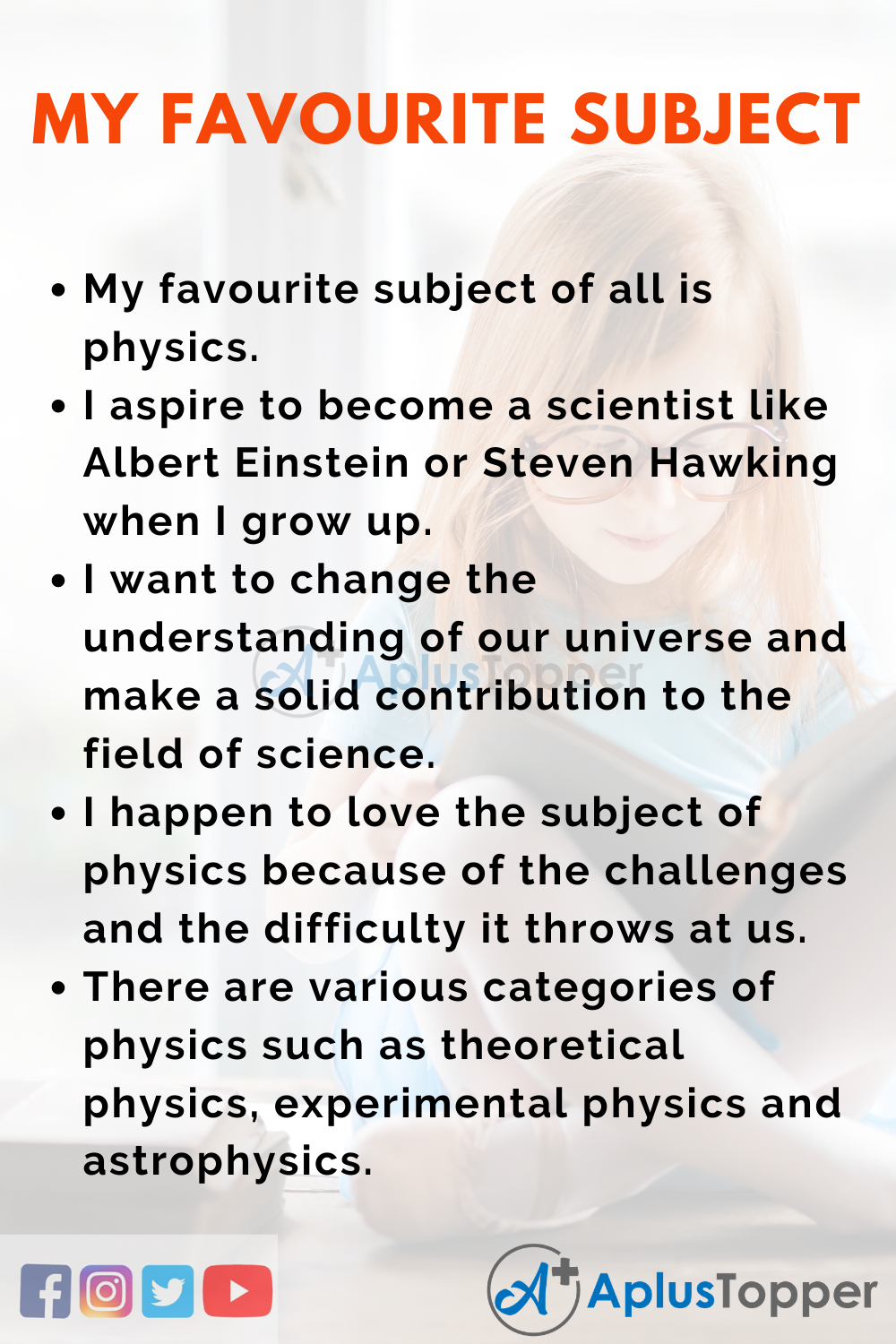 Short Essay on My Favourite Subject 200 Words in English

My favourite subject is physics. Physics is perceived by my friends as the toughest subject of all as it is an amalgamation of maths and chemistry. But I happen to love physics mainly because of the broad everyday impact it has on society. Since I happen to like the subject, I’m good at it and usually score well and better than my classmates. As a result of which, I am almost like a tutor to my friends during physics examination time. Albert Einstein and Steven Hawking are two of my greatest role models in life. Other than being legendary theoretical physicists and having achieved great steps in their own field, they are a true inspiration with respect to their personal lives as well. While Albert Einstein having faced the difficulties and atrocities during the World War, especially having born in a humble family, went on to discover the theory of relativity in spite of all the hardships.

This is what makes Albert Einstein the greatest scientists of all time. And the thing about another widely popular scientist, Steven Hawking is much more inspirational than other scientists. Being a differently-abled person, and having stuck on a wheelchair for years, he discovered a black hole on the universe which has cascading effects on other inventions and our understanding of the universe. I want to grow up to be like them and make a worthwhile contribution to the field of physics. I aspire to study at top institutions in the world such as Harvard, CalTech and Princeton University. I one daydream of winning the Nobel Prize for physics.

10 Lines on My Favourite Subject Essay FAQs on My favourite Subject Essay

Question 1.
Which is my favourite subject in school?

Answer:
Physics is my favourite subject in school.

Question 2.
Who is the father of physics?

Answer:
Albert Einstein, Isaac Newton and Galileo Galilei are known as the father of physics.

Question 3.
Which is the top university in the world to study physics?

Answer:
CalTech is the top university in the world to study physics.

Question 4.
What are the few branches of physics?