Essay on Ms Dhoni: In a country where cricket is nothing less than a national obsession and a land where, be it God or the devil, both eat, sleep cricket and most certainly wear cricket with their hearts right on their sleeves. Where the game takes a near fanatical angle, this 26 years old from the backwaters of Jharkhand sparked off instant national celebration after leading Team India to lift the 2011 world cup trophy.

This was another historical win for Team India and the entire nation, after the success of inaugural Twenty-20 World Cup at Johannesburg in South Africa on 24th September, 2007. – Captain Cool

Below we have given a long essay on Ms Dhoni of 500 words is helpful for classes 7, 8, 9 and 10 and Competitive Exam Aspirants. This long essay on the topic is suitable for students of class 7 to class 10, and also for competitive exam aspirants.

‘Mahi’, as Mahendra Singh Dhoni is popularly known, was born on 7th July, 1 981 to Pan Singh and Devaki Dev at Ranchi in Bihar (now Jharkhand). Dhoni’s parents had moved to Ranchi from Uttarakhand where his father works in a junior management position in Mecon. He has a sister and a brother.

Dhoni is a fan of Adam Gilchrist and his childhood idols were teammate Sachin Tendulkar, the Bollywood actor Amitabh Bachchan and the melody queen Lata Mangeshkar.

Dhoni studied at DAV Jawahar Vidya Mandir School, Shyamali in Ranchi where he initially excelled in badminton and football, and was selected at district and club levels in these sports. For his football team, Dhoni was a goal keeper and was sent to play cricket for a local cricket club by his football coach.

Though the had not played cricket before, Dhoni impressed with his wicket keeping skills and became the regular wicket keeper of his cricket club. Dhoni started focussing completely on cricket after 10th standard. He was also good at studies in his school.

During 2000-03, he worked as a Train Ticket Examiner (TTE) in Midnapore district, West Bengal. He was honest and straightforward. But he also had a mischievous shade to him. He and his colleagues scared the night guards by acting as ghosts. This incident even made news the next day.

Dhoni was included in Bihar U-19 squad for the 1998-99 season and later made his Ranji Trophy debut for Bihar in the 1999-2000 season as an 1 8 year old. He made a half century at the time of his debut. In 2004, he became a serious contender for national selection with some stirring performances when the occasion demanded- a rapid 100 which helped East Zone clinch the Deodhar Trophy and an audacious 60 in the Duleep Trophy final.

Later, in his two centuries against Pakistan and in the triangular tournament in Kenya, he established himself as a clinical destroyer of the bowling attacks. Dhoni’s talent was noticed through BCCI’s small town talent spotting initiative. He was seen by PC Podar, the Captain of Bengal in the 1960s, while Dhoni was playing for Jharkhand. Podar immediately sent a report to National Cricket Academy.

In his fifth one-dayer against Pakistan, at Visakhapatnam, he cracked a dazzling 148, followed by a colossal 183 not out at Jaipur against Sri Lanka and in the process eclipsed the highest score by Adam Gilchrist. These innings had Dhoni’s 10 sixes, the most by an Indian in an inning and the fifth highest in ODIs.

He and Mahela Jayawardene set a new world record for the sixth wicket partnership of 218 runs, during Afro-Asia Cup in 2007. In 2012, he became the only captain in ODIs to score a century while batting at number 7. He also became the fourth fastest batsman to complete 8,000 runs in One-Day cricket in 2014.

In test matches also, he was an instant hit, cracking 148 at Faisalabad against Pakistan in his fifth test, when India was struggling to avoid the follow on. He was elevated to the vice-captaincy of the one-day squad for the tour of England and Ireland in 2007. In 2008, defeating Australia, under Dhoni’s captaincy, India registered the biggest ever win with 320 runs. In 2009, Dhoni created a record for most catches by an Indian player in 320 an inning. 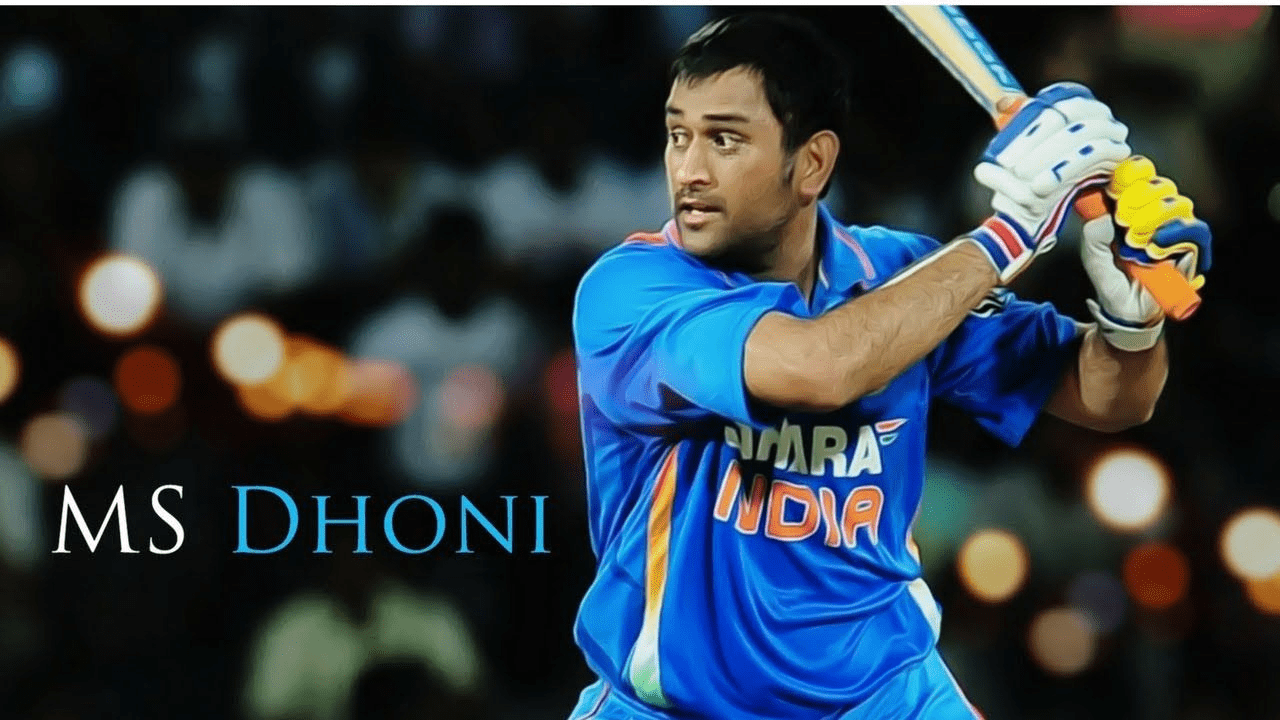 Below we have given a short essay on Ms Dhoni is for Classes 1, 2, 3, 4, 5 and 6. This short essay on the topic is suitable for students of class 6 and below.

In 2007, he was appointed the captain of Twenty-20 squad for the World Championship in South Africa. Watching his performance in just a few of the T-20 World Cup matches in South Africa, the selectors handed the reigns of one-day team to him after Rahul Dr avid decided to step down as captain. Under his captaincy, India won the 2011 World Cup. In the final against Sri Lanka, he promoted himself up the order, knocking 91 off 79 balls, with a six off the last ball.

Dhoni has won accolades for his tremendous talent. He was the ICC ODI Player of the Year for 2008 and 2009. In 2013, he won the LG People’s Choice Award. India’s highest honour in sports, Rajiv Gandhi Khel Ratna was also bestowed upon him earlier (2007-08). He also holds a honorary doctorate from De Montfort University.

A powerful hitter of the ball, MS Dhoni has shown the maturity to restrain his aggressive nature and play responsibly when the situation requires so. As a leader on the field, he is coolness personified. Great cricketers, like Sachin, Dravid, Ian Chapell, Steve Waugh have unanimously hailed him as ‘the best captain’, ‘a great leader’ and the ‘best finisher.’

The ever-manipulating cricketing brain beneath the long locks knows how to get the best out of his team. He is a fountain head of positive energy and will continue to be the heartbeat of young India.