Essay On Mineral Wealth Of India: A mineral is a natural substance of organic or inorganic origin with defined physical and chemical properties. Minerals are unevenly distributed on Earth. Good quality minerals are available less in quantity and are also non-renewable resources, which once exhausted, can’t be replaced immediately. Minerals are of two basic types metallic and non-metallic. Metallic minerals, like iron, nickel, manganese, tungsten etc., are ferrous, since they have iron content. Some non-ferrous metallic minerals are gold, silver, copper, tin etc.

Long Essay on Mineral Wealth Of India 600 Words in English

Below we have given a long essay on Mineral Wealth Of India of 500 words is helpful for classes 7, 8, 9 and 10 and Competitive Exam Aspirants. This long essay on the topic is suitable for students of class 7 to class 10, and also for competitive exam aspirants.

The non-metallic minerals may or may not contain organic matter. Coal and petroleum are organic in nature, while mica, limestone, graphite and gypsum are inorganic. Minerals such as coal and iron are of industrial importance; mica, manganese, copper, lead and zinc are of economic importance; and coal, petroleum, thorium and uranium are of national importance.

India is the leading producer of some of the minerals and contains a diverse and significant store of these minerals. Of the 89 minerals produced in the country, 4 are fuel minerals, 11 metallic, 52 non-metallic and 22 minor minerals. India is the largest producer of mica blocks and mica splittings; ranks second in the production of chromite, baryte, talc and steatite; ranks third in the production of coal, lignite, and bauxite; fourth in iron ore, fifth in steel, seventh in zinc, eighth in copper, tenth in aluminium and eleventh in mica.

India has a large number of economically useful minerals and they constitute one-quarter of the world’s mineral resources. About two-thirds of its iron deposits lie in a belt along Odisha and Jharkhand border. Other haematite deposits are found in Madhya Pradesh, Karnataka, Maharashtra and Goa. Magnetite iron ore is found in Tamil Nadu, Jharkhand and Himachal. Bituminous coal is found in Jharia and Bokaro in Jharkhand and Ranigunj in West Bengal.

Lignite coals are found in Neyveli in Tamil Nadu. Next to Russia, India has the largest supply of manganese. The manganese mining areas are Madhya Pradesh, Maharashtra and Jharkhand-Odisha area. Chromite deposits are found in Jharkhand, Cuttack district in Odisha, Krishna district in Andhra Pradesh and Mysore and Hassan in Karnataka. Bauxite deposits are found in Jharkhand, South-West Kashmir, Central Tamil Nadu, and parts of Kerala, Uttar Pradesh, Maharashtra and Karnataka.

Belts of high quality mica are Bihar, Andhra Pradesh and Rajasthan. Gypsum reserves are in Tamil Nadu and Rajasthan. Nickel ore is found in Cuttack and Mayurbhanj in Odisha. Copper ore bearing areas are Agnigundala in Andhra Pradesh, Singhbhum in Jharkhand, Khetri and Dartiba in Rajasthan, and parts of Sikkim and Karnataka.

The Ramagiri fields in Andhra Pradesh, Kolar and Hutti in Karnataka are important gold mines. The Panna diamond belt is the only diamond producing area in the country, which covers the districts of Panna, Chhatarpur and Satna in Madhya Pradesh, as well as some parts of Banda in Uttar Pradesh. Petroleum deposits are found in Assam and Gujarat. Fresh reserves were located off Mumbai Coast. The potential oil bearing areas are Assam, Tripura, Manipur, West Bengal, Punjab, Himachal, Kachchh and the Andamans. India also possesses the all-too-valuable nuclear Uranium as well as some varieties of rare Earths.

The mineral wealth of India at present comprises an adequate range of useful products that are necessary for the industrial development of the country. An appraisal of the reserves shows that while in respect of minerals essential for basic industries coal and iron the reserves are ample, the country is deficient in a fairly long list of vital minerals like ores of copper, tin, lead, zinc, nickel, cobalt and in sulphur and most important of all, petroleum.

The position with regard to aluminium ore, refractories, abrasives, limestone etc., may be considered as fairly adequate while in respect of titanium and thorium ores and of mica, the country has considerable reserves.

Until recently, mineral exploration and their utilisation in the country received little attention. Except for coal, iron ore and petroleum required for internal use, the majority of minerals were extracted in India for the purpose of bulk export without any processing and fabrication. These exports brought but a small return to the country.

Nearly a hundred minerals are known to be produced or mined in India, of which nearly 30 may be considered more important and the rest seem to be capable of material development in future with the expansion of industries.

It should be made clear at the outset that though progress has been made in the survey of mineralised areas in recent years and the principal mineral regions have been ascertained, exploration of mineral resources has not been thorough or complete in most cases and present estimates are just rough guesses. The power resources in India comprise coal, oil and hydroelectricity. India’s coal mining is centered mainly in Bihar and West Bengal. The total workable reserves of coal down to a depth of 1000 ft are estimated at 20000 million tonnes, of which the good quality coal would amount to 5000 million tonnes. The reserves of coking coal, however, are small, amounting to only 2000 million tonnes. As against relatively meagre resources of coal and oil, the hydroelectric resources of India are considerable with estimates varying from about 30 to 40 million horse-power. India possesses large quantities of high grade iron ore and may be classified as one of the countries which can reasonably expect a long continued development of heavy industry; though, in proportion to the population, these reserves are lower than the main ore regions of the world.

Incessant mining and plundering of mineral resources has disastrous effects on the ecosystem of a region. Water scarcity has increased, river beds are getting damaged and even the biodiversity is getting hampered. 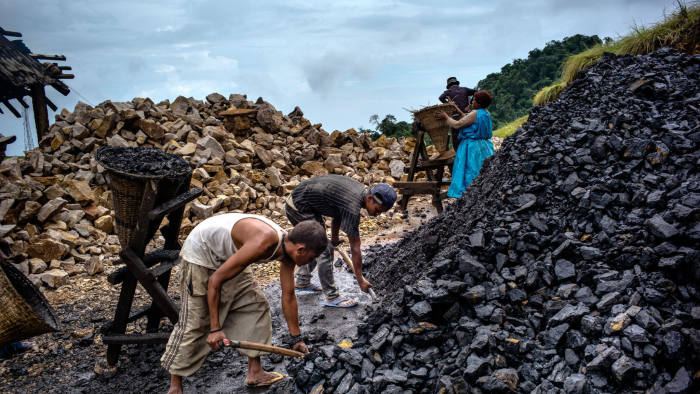 Short Essay on Mineral Wealth Of India 300 Words in English

Below we have given a short essay on Mineral Wealth Of India is for Classes 1, 2, 3, 4, 5, and 6. This short essay on the topic is suitable for students of class 6 and below.

In India, over the years, a national mineral policy has evolved. The policy addresses certain new aspects and elements like mineral exploration in the sea-bed, development of proper inventory, proper linkage between exploitation of minerals and development of mineral industry, protection of forests, environment and ecology from the adverse effects of mining, enforcement of mining plan for adoption of proper mining methods, optimum utilisation of minerals, export of minerals in value-added form and recycling of metallic scrap and mineral waste.

The Mines and Minerals (Regulation and Development) Act, 1957 lays down the legal framework for the regulation of mines and development of all minerals other than petroleum and natural gas. The Central Government has framed the Mineral Concession Rules 1960, for regulating grant of prospecting licenses and mining leases in respect of all minerals other than atomic minerals and minor minerals. The State Governments have framed the rules in regard to minor minerals.

The Central Government has also framed the Mineral Conservation and Development Rules, 1988 for conservation and systematic development of minerals. These are applicable to all minerals except coal, atomic minerals and minor minerals. New regulations from 2012 onwards have stated that any mining activity would, at first, require clearance or permission from the Ministry of Environment and Forests.

Thus, our policymakers should ensure that they create no more ‘ecological refugees’, people who are rendered homeless due to mindless mining in their dwelling places. Only then can minerals provide rich returns to the economy and strengthen it.