Essay on Madurai: Madurai is the cultural capital of the Indian state Tamil Nadu. The 44th most populated city in India is the third-largest city in Tamil Nadu, and it is the administrative headquarters of Pandya Nadu and Madurai District.

We provide students with essay samples on a long essay of 500 words and a short essay of 150 words on the topic Madurai for reference.

Madurai is a very well known city in India situated in the state Tamil Nadu. Mostly Tamil and English speaking people are the residents of this city. Based on population, Madurai stands 44th among all most populated cities in India. And, Madurai is also the cultural capital of Tamil Nadu.

The name of the city Madurai was first mentioned by the Greek ambassador of the Maurya empire, Megasthenes and Kautilya, a minister of the Mauryan emperor Chandragupt Maurya during the 3rd century B.C. Excavations by Archeological Survey of India in Manalur have proved the existence of the civilization of Madurai city as the signs of human settlements and links of Roman trade were evident.

There are several historical monuments and sculptures in Madurai. Meenakshi Temple and Tirumalai Nayak Palace are the most famous and prominent among the monuments. In South portion of Tamil Nadu, Madurai is an important educational and industrial hub. Madurai city is one of the top manufacturers of rubber, chemical and granite in India.

Madurai is the home of many important government educational institutes like Madurai Medical College, Madurai Law College, Agricultural College and Research Institute, etc. According to the Municipal Corporation Act, a municipal corporation administrates the Madurai city, that was established in 1971.

Madurai’s historical background has various opinions. Megasthenes visited Madurai during the 300 B.C. and referred the city as “Methora” in his travel accounts. But, many scholars believe that “Methora” was referred to as “Mathura”, which was a city in North India in the Mauryan Empire. Kautilya or Chanakya also mentioned the name of Madurai in his book “Arthashastra.”

Meenakshi Amman Temple was the geographic and ritual centre of Madurai city. Vishwanatha Nayak was the first Madurai Nayak king, who redesigned the city, according to the principles of Shilpa Shastras that was related to urban planning.

The whole area of Madurai city is about 147.97 Km2. This city remains hot and dry for eight months in a year. During February and March, the neighbouring Dindigul experiences cold winds. March to July is the period when Madurai is the hottest. During August to October, Madurai experiences a moderate climate containing heavy rain and thundershowers. As Madurai is situated in equal distances from mountains and sea, it experiences similar weather like north-east states.

Madurai was an agriculture-based area. Cultivation of rice paddies was main in the city. The Nayaka kings introduced the cultivation of the cotton crop in the regions with black soil, to increase the revenue from agriculture. Madurai was famous for plantation of jasmine, which was called “Madurai Malli.”

This Madurai city is a really beautiful place for religious people there are famous temples. Those temples are covered with carvings of Hindu gods. Millions of people attend the festival of celebrating Meenakshi and Lord Bishnu, called Chithirai. 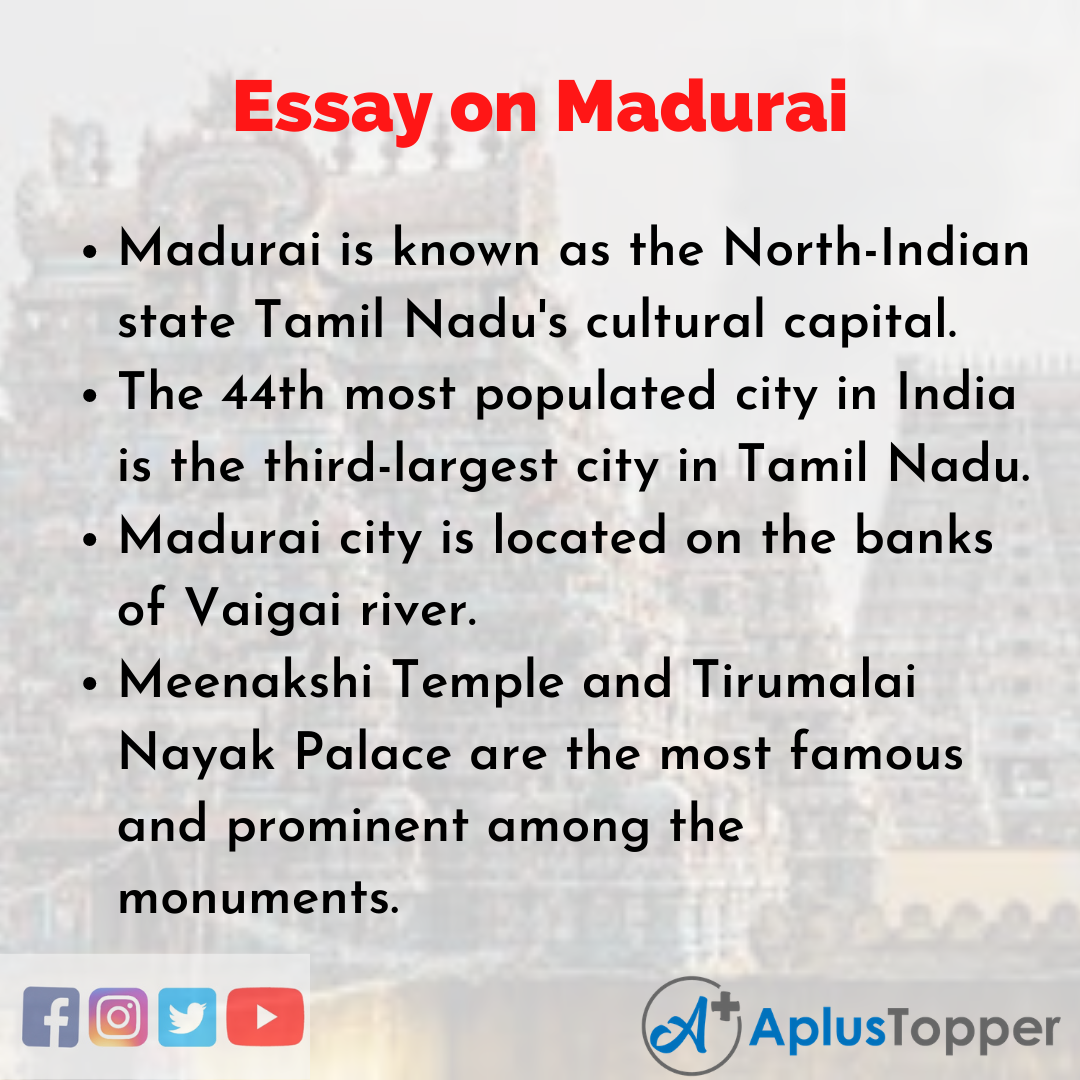 Madurai is a very well-known city in the northern state of India, Tamil Nadu. Most of the Tamil and English-speaking people of India live in this state. Madurai is a city filled with a rich historical background. Greek ambassador of Maurya Empire, Megsthenes and Chandragupt Maurya’s minister Kautilya mentioned the name of this city in their respective books.

Madurai was traditionally a place of cultivation of crops and people of this city used to cultivate rice paddies the most. Later during the rule of Nayaka kings, cultivation of cotton crops was introduced to increase the revenue from agriculture. Now Madurai has become an important hub for education and industries.

Madurai is a very beautiful place for visiting and it attracts religious people the most as there are many temples here and there in Madurai. Temples in Madurai are evidence that people of ancient times were so creative, hard-working and intelligent. The temples are covered with beautiful carvings of Hindu gods. This city is worth visiting.

10 Lines on Madurai Essay in English

1. Madurai is known as the North-Indian state Tamil Nadu’s cultural capital.
2. The 44th most populated city in India is the third-largest city in Tamil Nadu.
3. Madurai city is located on the banks of Vaigai river.
4. Meenakshi Temple and Tirumalai Nayak Palace are the most famous and prominent among the monuments.
5. According to the Municipal Corporation Act, a municipal corporation administrates the Madurai city, that was established in 1971.
6. Meenakshi Amman Temple was the geographic and ritual centre of Madurai city.
7. The whole area of the Madurai city is about 147.97 Km2
8. As Madurai is situated in equal distances from mountains and sea, it experiences similar weather like north-east states.
9. Madurai was famous for plantation of jasmine, which was called “Madurai Malli.”
10. Millions of people attend the festival of celebrating Meenakshi and Lord Bishnu, called Chithirai. 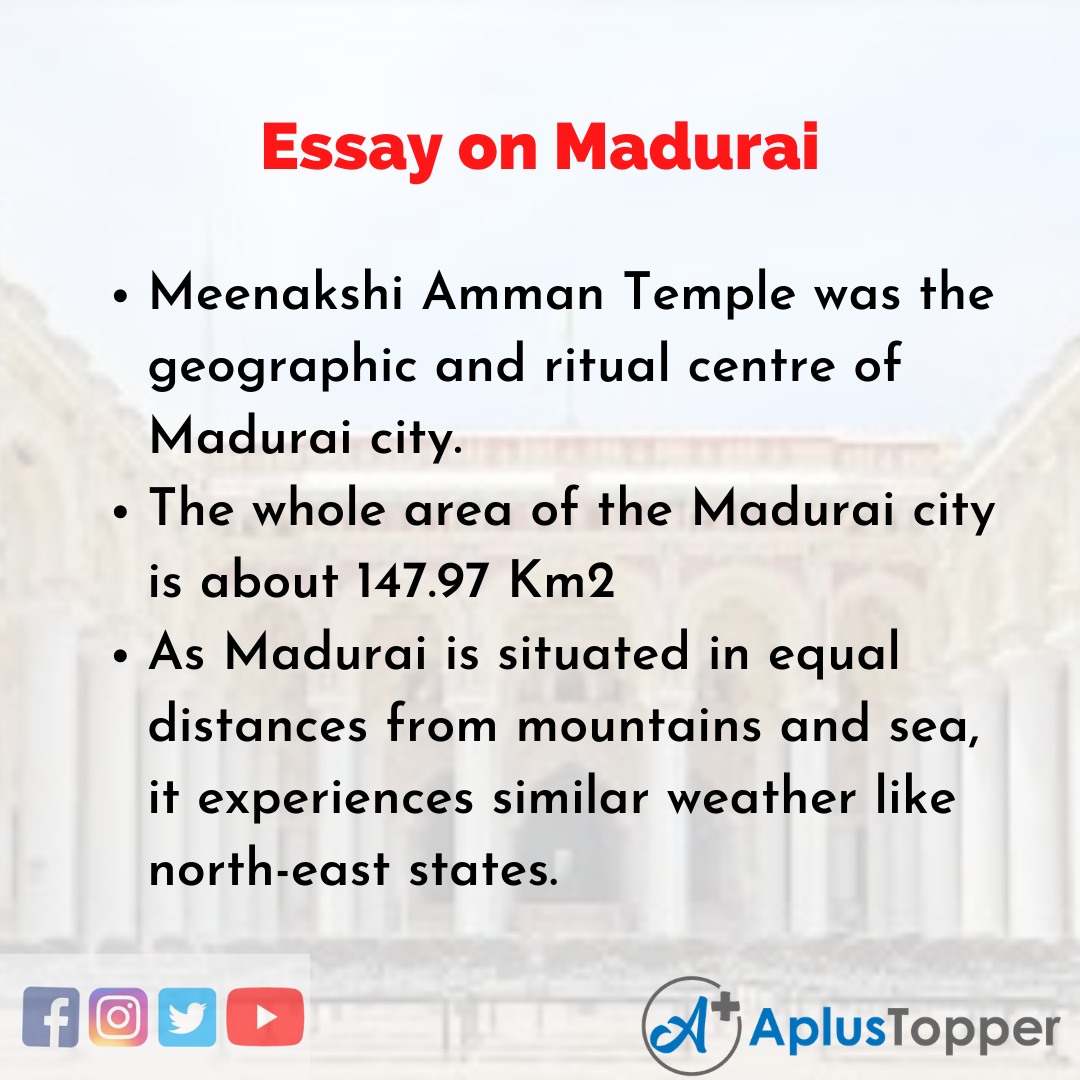 Question 1.
Where is the Madurai city situated at?

Answer:
Madurai city is situated on the banks of the Vaigai river.

Question 2.
Where do we find the first mentions of the city Madurai?

Answer:
The name of Madurai city was first mentioned in the writings of Greek ambassador Megasthenes and Chandragupt Maurya’s minister Kautilya during the Maurya rule.

Question 3.
What is the cultural capital of Tamil Nadu?

Answer:
Madurai is the cultural capital of Tamil Nadu.

Question 4.
Cultivation of what flower made Madurai famous?

Answer:
Madurai is famous for the cultivation of jasmine.