Essay on Lucknow: The capital city of Uttar Pradesh, Lucknow, is situated near the edges of the Gomti river. Nawab Asaf-ud-Daula formed this city. Due to the high number of Muslims in an earlier time, it became a hub for Urdu’s poetry. It reached its peak during the Wajid Ali Shah rule. He was extremely devoted to poetry and music.

Now, Lucknow is known for its Urdu and Hindi literature. The rich history of Lucknow is still remembered to this date. Lucknow is famous for many things such as Chikankaari or exquisite cuisine or elaborated embroidery work on muslin cloths. It is also referred to as “Nawabs City.”

We are providing students with essay samples on a long essay of 500 words and a short essay of 150 words on the topic Lucknow for reference.

Lucknow is widely referred to as the “city of Nawabs.” Lucknow has been located near the river Gomti banks since the Suryavanshi dynasty. It is known as the capital of Uttar Pradesh. Nawab Asaf-ud-Daula has established it.

In ancient times, the nawabs ruled Lucknow and were their capital. It is one of the sole reasons it is also referred to as the Nawabs city. The ancient era where the Nawabs ruled Lucknow gave this city the rich and polite culture and delightful cuisines for which it is popular in the present.

Lucknow has not been affected by the massive modernization in the current world and has successfully maintained its elegance and ancient royalty/charm.

The formality, politeness, and warmth of Lucknow are still intact. It also blessed Lucknow with music, dance, literature, arts, and crafts that attract tourists to this place. Tabla and Sitar gained popularity in this city back in the earlier times.

The ruins and the monuments of Lucknow are also widely known across the state. It helps people feel closer to the rich history of Lucknow. This city is famous for the beauty and elegance surrounding it. It includes mouth-watering cuisine, diverse culture, and so on, successfully allure the tourists.

They are widely famous for their formality and hospitality. Although the big mansions have been replaced with flats throughout the city, it still hasn’t lost its charms.

Like most of the cities across the country, Lucknow also has a multi-lingual culture. The culture of this city is quite popular throughout the country and the world. The traditions set by the Nawabs are still abided by the people in the present age.

The cuisine of Lucknow is quite different from the rest of the cities. It is quite known for its Tunde Ke Kabab across the world. The kebabs, along with biriyani of Lucknow, are well-known.

The people of Lucknow are widely recognized for their artistic and poetic skills. The language primarily used in Lucknow are Urdu and Hindi. There are various renowned Urdu poets from Lucknow, such as Mir Baba Ali Anis and Mirza Dabeer. Besides, the festivals in Lucknow are celebrated with excitement, love, and joy.

Lucknow is also a great shopping destination for several tourists. One of the best malls present in this city is the Hazratganj, which is famous for its chat and kulfi. It also offers a combination of old and latest architecture. It comprises great lamp posts; the construction is similar to the Victorian age, making it very appealing.

There are many other shopping centers, along with restaurants that are widely known for offering quality services.

Besides, Lucknow has an elegant and rare architecture design, which distinguishes it from the other cities. These architectures were created in the era of British and Mughals.

The city’s architecture has been maintained and managed over the years to offer the best shine and beauty even after years. It includes Rumi Darwaza, AsafiImambara, Bara Imambara, ChattarMazil, etc. are glorious and provide the city with a royal feeling. 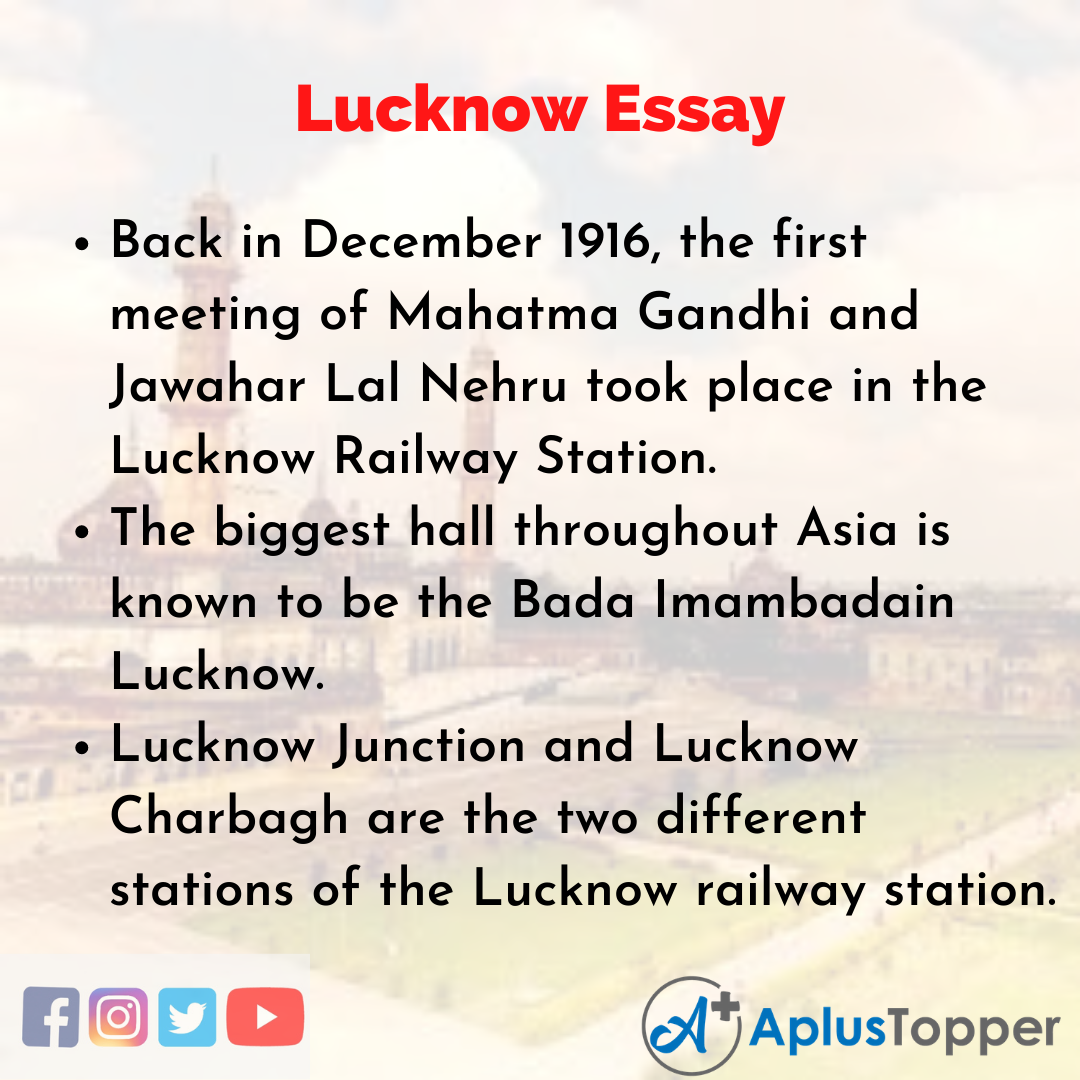 Lucknow is constantly developing each day. This city is very popular for literature like Hindi and Urdu. After Kanpur, it is referred to as the biggest city across the state.

Lucknow is known to have importance during the independence war and the Indian struggle. Including both the Khilafat movement and the Lucknow Pact of 1916. It helped to unite all the people across the state and even the country to protest against the British’s rulership.

Lucknow stayed the capital of Oudh from 1775 to 1901. It was then combined with the newly established provinces of Agra and Oudh. After attaining independence, Lucknow was announced as the capital of Uttar Pradesh.

The crucial monuments that hold utmost importance in Lucknow are the AsafiImambara. The widely popular ‘BhulBhuliyan’ is included in the AsafiImambata. A few of the other famous places are the Chattar Manzil, Lucknow Zoo, Shaheed Smarak, Dilkusha, Ram Krishna Math, etc.

10 Lines on Lucknow Essay in English

1. Back in December 1916, the first meeting of Mahatma Gandhi and Jawahar Lal Nehru took place in the Lucknow Railway Station.
2. The biggest hall throughout Asia is known to be the Bada Imambadain Lucknow.
3. Lucknow Junction and Lucknow Charbagh are the two different stations of the Lucknow railway station.
4. In the Gomti River, a unique natural shell is discovered. It was normally used for building jewelry.
5. A festival for Lord Hanuman is celebrated in Lucknow, i.e., Bada Mangal.
6. In the survey performed by the IMRB and LG, it stated Lucknow to be the second happiest city.
7. The Turkish gate is also popularly referred to as the Rumi Darwaza.
8. One of Asia’s largest park is the Janeshwar Mishra Park in Lucknow.
9. Every electrical wire is underground in Hazratganji.
10. The biggest reservoir of alligator and crocodile in Lucknow is the Kukrail garden. Question 1.
What are the things popular in Lucknow?

Answer:
The rates of the market are comparatively lower. The heritage and culture of Lucknow are rich.

Question 2.
When is it considered pleasant to visit Lucknow?

Answer:
It is known to be pleasant to travel to Lucknow between October to March.

Question 3.
What are the cuisines popular in Lucknow?

Answer:
Few of the famous cuisine in Lucknow are kebabs, biriyani,roomali roti, etc.

Question 4.
Which places are considered popular for visits in Lucknow?