Essay on Lata Mangeshkar: The Queen of Melody, the Bharat Ratna and Swar Ganga who has completed 81 years of wonderful life and is still as melodious as a nightingale- Lata Mangeshkar is music personified. This Dada Saheb Phalke Award receiver moved the entire nation with her deep influencing voice while she sang ‘Ae Mere Watan Ke Logon’ on All India radio and a stunned nation wept to her heart rendering voice. – The Nightingale of India

Below we have given a long essay on Lata Mangeshkar of 500 words is helpful for classes 7, 8, 9 and 10 and Competitive Exam Aspirants. This long essay on the topic is suitable for students of class 7 to class 10, and also for competitive exam aspirants.

She represents an entire era, a movement and a lasting phase in Indian music. Her voice has such great power that it has transcended all barriers of language, caste, creed, culture, boundaries, region and religion. To millions it is an amalgamation of melody, sweetness and harmony.

Born on 28th September, 1929, she is the daughter of the well known Drama Troupe Owner in Marathi- Pandit Dina Nath Mangeshkar. She is the eldest among the four daughters and a son. Her mother Shevanti, hailed from Thalner, Maharashtra and was her father’s second wife.

The family’s surname was originally Hardikar, but Deenanath changed it to ‘Mangeshkar’ to relate it with his native place Mangeshi in Goa. Lata’s childhood name was Hema. She was renamed after a character, Latika, from one of her father’s plays. The first fruits of Classical Music were tasted by Lata Mangeshkar under the auspicious training of her own father.

But the sky fell down when in 1942 with the demise of Pandit Dina Nathji, the mantle of responsibilities naturally fell on to the shoulders of Lata who was barely thirteen.

In 1945, she moved to Mumbai, where she started learning Hindustani classical music from Ustad Amanat Ali Khan. After partition, the latter migrated to Pakistan. So she started learning from Amanat Khan Devaswale and Pt Tulsidas Sharma. Lata got her first break in 1948 when she sang a song in the Hindi film ‘Majboor’ composed by music director Ghulam Haider.

The rest is history as we all know. Since then, she never looked back. She has successfully etched in gold, a place of honour for herself. The versatility of Lata as a singer can be judged by the number of songs and the number of languages that she has sung in, ranging from love songs to sad blues to classical singing and Ragas to Bhakti and Devotional-there seems to be nothing left untouched and unexplored by Lata Mangeshkar.

Her voice has given life, flesh and blood to thousands of songs in numerous languages. Her voice symbolises the voice of India or India singing to the world. If there are things that have for ages divided the people, her voice has the force to unite and bind people through the string of her sweet voice. Her voice has echoed through decades and still emerges as a clear, distinct and representative voice of an entire nation, and era.

In 2007, she released an album, Saadgi, comprising eight ghazal-like songs penned down by Javed Akhtar. In 2011, she released the album, ‘Sarhadein: Music Beyond Boundaries, which consists of a duet between her and Mehdi Hasan. On 28th November, 2012 she launched her own music label LM music, with an album of bhajans. She sang along with sister Usha in it.

Recognising her great contribution in the field of vocal art and melody, she was nominated to Rajya Sabha in 2000. Her work in that field too is commendable. She regularly contributes to the welfare of the country and works towards the upliftment of the under-privileged.

Despite being such a great name. Lata seems to have remained the same simple person at heart. The white silk saree with a traditional red border and plait have become a trademark symbol of Lata Mangeshkar. Her humility and shy persona too has remained unchanged. Not only has her voice moved millions within the country but has also spread the magic of Indian music all over the globe. 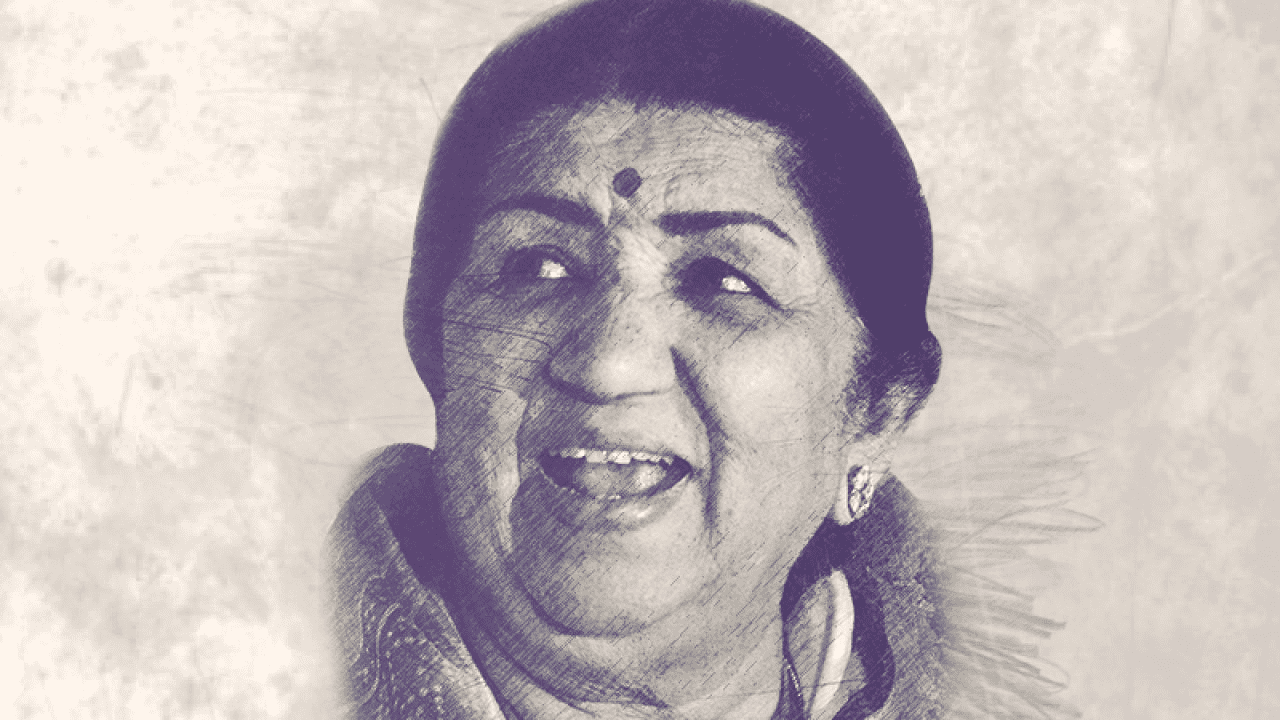 Below we have given a short essay on Lata Mangeshkar is for Classes 1, 2, 3, 4, 5 and 6. This short essay on the topic is suitable for students of class 6 and below.

Lata Mangeshkar is one of the only two singers and the only playback singer to have been awarded the Bharat Ratna, the country’s highest civilian honour the other being the classical vocalist M.S Subbulakshmi. She has also been awarded Padma Bhushan, Padma Vibhushan and Dada Saheb Phalke Award in recognition of her great achievement in the field of music. Moreover she has received four Filmfare Awards, the Platinum Disc of EMI London and numerous other awards.

The story moves further as Lata continues to rock the nation with her melodious and harmonious voice. She has become an ideal for all the aspiring young girls who want to pursue the profession of singing. Her simplicity and humility is as amazing as her voice.

Ghulam Haider had once said years ago, “Let me foretell today, that this girl will put to shame everyone else including Noor Jahan. Producers and directors will fall at her feet, begging her to sing in their film”. Well, there is no doubt about the prophecy coming true. Till date, India has failed to produce another Lata Mangeshkar and it seems that there can be no other like her even in the years to come.