Essay on Labour Day: 1st May is celebrated as International Labour Day all over the world. This is a day that marks the importance of labour in this world and assures the dignity of work for every profession. The day recognizes the labourer’s contribution and impresses upon us the need to respect and honour them. Labour Day is very important for us to understand the true worth of the workers.

Labour Day is a celebration for the working class who have suffered a long time under capitalist rule. The rise of the working class happened due to the teachings of Karl Marx, the creator of the Communist Manifesto. He was the first person ever to speak about their rights. His teachings aspired to organize a revolution by which the working class will seize production from the capitalist class. Labour Day, thus, has a detailed history of class struggle.

Capitalism seeks to suppress labourers and exploit them. Under this system of the Economy, the laborers did not get paid and were thoroughly tortured by those who had control over the means of production. Labour Day recognizes the prolonged, revolutionary efforts of the working class to get what they truly deserve. Labour Day has its roots in the Labour Union Movement in the United States of America. The exploitation of the working class has been prevalent since the very onset of the feudal order. The feudal lords used to treat their workers in ways unimaginable to humans.

However, the Industrial Revolution gave rise to two main classes, the Bourgeoisie and the Working class. The capitalists made the labourers work under extreme conditions. They were not given proper tools, and they did not earn an adequate livelihood. The laborers rose in protest and demanded suitable working hours, sufficient salary, paid leaves, and vacations. They advocated eight hours of work per day in violation of the fifteen hours a day work schedule.

Labour Day acknowledges the revolutions in every country. The Bolshevik Revolution under Vladimir Lenin in Russia was the first Working Class protest. Thus, 1st May is celebrated as Labour Day for every worker in the world. In India, Labour Day is celebrated with great zeal. It was in solidarity with the communist and socialist party, and on this day, a red flag was used in India for the very first time. Presently, on Labour Day, every school celebrates and honors the workers who toil tirelessly throughout the year. Students organize and formulate programs to extend their love to their beloved caregivers in school. They sing, dance and recite for them.

Labour Day is a critical day because it also teaches us about the dignity of labour. No work is disrespectful, and we must acknowledge and celebrate every profession. Starting from a sweeper to a farmer, every business helps us in some way or the other, and we must express our gratitude to those who work so hard to give us the facilities we need. In Ghana, Labour Day is celebrated by the trade unions and labor organizations by organizing parades all over the city. They put up banners and posters to mark the importance of this day.

During earlier times, labour Day is also a symbol of resistance to torture and exploitation the workers were subjected to by the capitalists. The day impresses upon us the vitality to fight for our rights. Thus, it is an important event that we should celebrate humbly and with a cheerful heart. 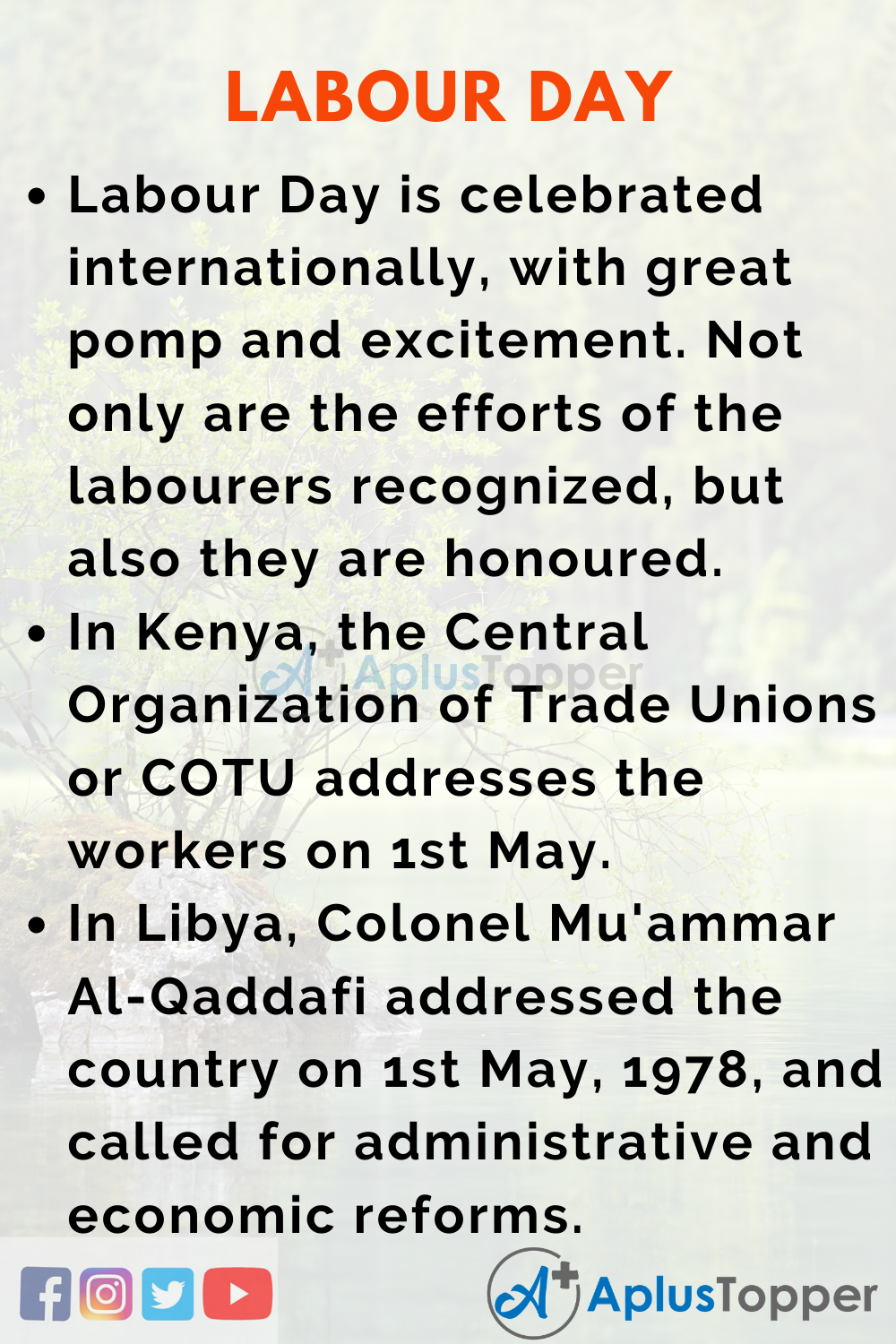 Labour Day holds extreme importance in our lives for varied reasons. Firstly, we need to recognize the constant torture the workers have been through. We must be well-versed with the history of our workers. The labour rights movement is a constant reminder for us not to take our privileges for granted. We must realize that our ancestors had only gotten their right to adequate livelihood after a long battle. We must take care of those who continuously work to make us happy. We must donate something to the maid who works at our house to educate her child and give him a better life. We must respect them and provide them with the dignity they truly deserve.

Students can get a Paragraph on International Labour Day and Speech on Labour Day from here. 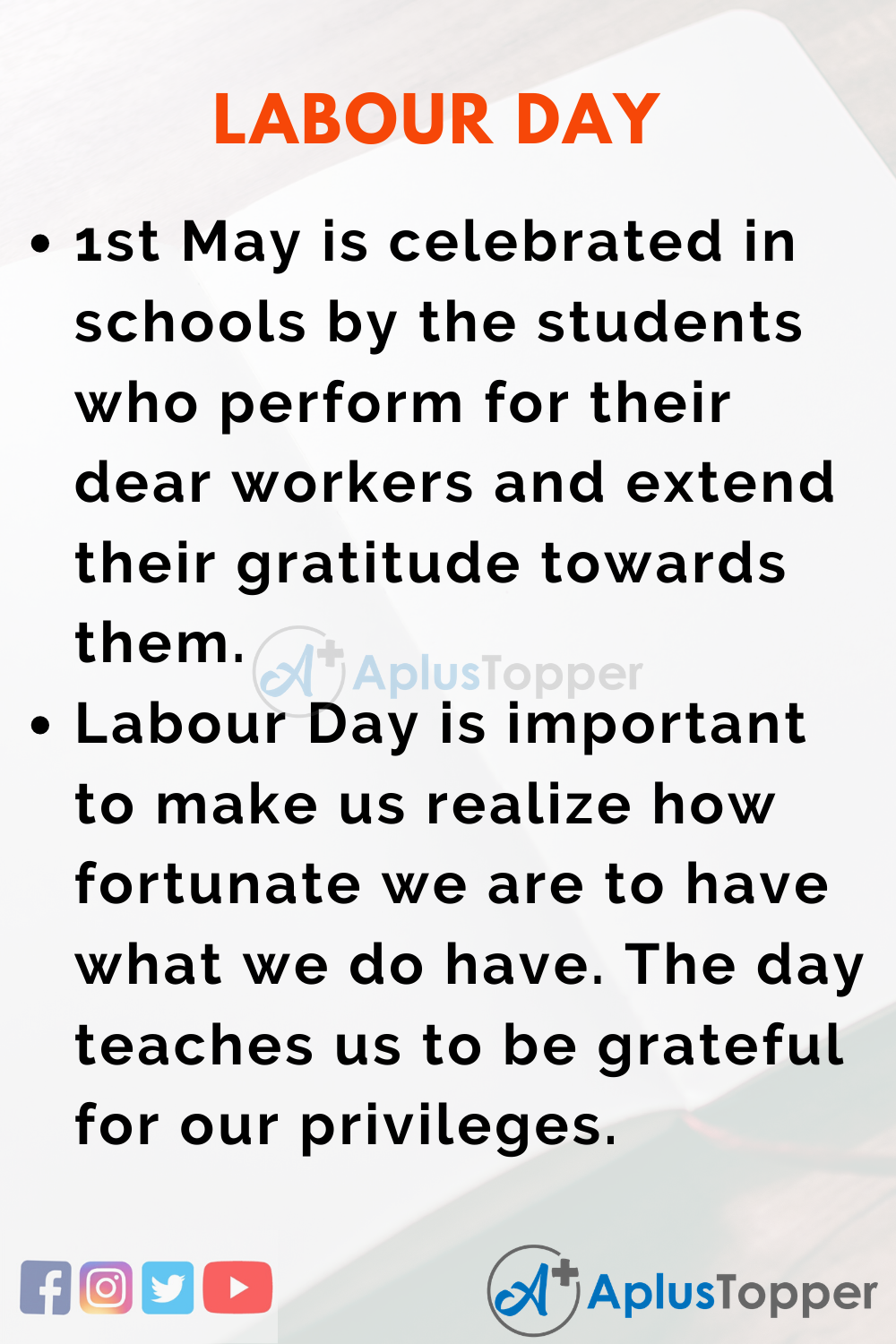 Question 1.
What was the labour movement?

Answer:
The labour movement started in the USA, and labourers demanded eight hours of work along with paid leaves and proper wages.

Answer:
India first celebrated Labour Day on 1st May, 1923. To this day, Labour Day is observed with great enthusiasm and grandeur.

Question 3.
What is the history behind the labour rights movement?

Answer:
After the Industrial Revolution, the workers were mistreated by the capitalists daily. They were made to work for inhumane hours and were not given proper wages. This made the workers rise in protest.

Question 4.
Who wrote about Labour rights?

Answer:
It was Karl Marx and Friedrich Engels who first postulated the theory of labour rights and set the foundation for a socialist system.