Essay on Kolkata: Kolkata is considered one of the largest cities in India. It is among the top metro cities in India and is capital for West Bengal. In an earlier time, it was named Calcutta. This city was built by the British Empire and was considered the capital during 1773-1911 for British India. Another nickname for this city is – “City of Joy”.

This city offers a variety of colours of life and also provides various means of transport along with famous spots for tourists. The Indian cuisine available in this city is vast and well-known all over India.

We are providing students with essay samples on a long essay of 500 words and a short essay of 150 words on the topic Kolkata for reference.

It is considered to be the second biggest city in India. This city is famous for its beauty and on-going development. The metropolis situated in the town is around 350 years old. It is known to the capital of West Bengal.

Everything in this city is famous for its several popular monuments, cuisines, places, and so on. The streets of Kolkata are typically filled with innovation and life amongst the chaos, vividity, and so on. This city is a mixture of both modern and traditional cultures.

There are numerous systems for transportation available in this city. The trams are also available in Kolkata since the ancient times. The provision of the underground metro services took place first in Kolkata.

Besides, this city is widely famous shopping location. It is highly visited by individuals from various parts of the state to purchase several things and products at a wholesale rate.

This city is trendy for its variety of mouth-watering dishes and desserts. It comprises mainly of Macher Jul, Kolkata Roll., Kolkata Biriyani, and so on are quite famous in Kolkata. The deserts include Mishti Doi, Sandesh, Roshogollah, and so on.

In Kolkata, you can find a combination of religion, culture, and races. There are several famous places in Kolkata, including the parks, stadiums, museums, etc. Some top places include the park street, kaligath, and so on.

This city has its uniqueness and importance in comparison with the other cities present in India. The subway services got introduced in India first in Kolkata. The different types of transportation systems include rickshaw, subway, train, trams, and so on.

The places that one should never miss while visiting Kolkata include the Hauler Bridge, Botanical Gardens, Science City, and so on. The famous places in Kolkata that are visited by several people mainly for shopping purposes are the New Market, Park Street, Meadhanet, etc.

Numerous famous personalities of India were raised in Kolkata. It is a place which is respected greatly for talent. It is the home of many great writers and poets including Sukumar Ray, Bankimchandra Chattopadhyay, etc. Scientists like C.V. Raman, Amal Kumar, Raychaudhuri, etc. Also, artists such as Bipasha Bass, Lani Mukorjji, etc.

One of the most incredible parts of the town is its budget-friendly environment. It offers great quality services at an affordable price for everyone to enjoy their visit equally.

Kolkata is also popular for the number of freedom warriors that it raised including Netaji Subhas Chandra Bose and Raja Rammohan Roy.

Besides, it is also considered as the city of pleasure. Since several people from different religious backgrounds coexist here peacefully, the other attractive and beautiful places of Kolkata are the Alipore Zoo, Marble Palace. Indian Museum, etc. 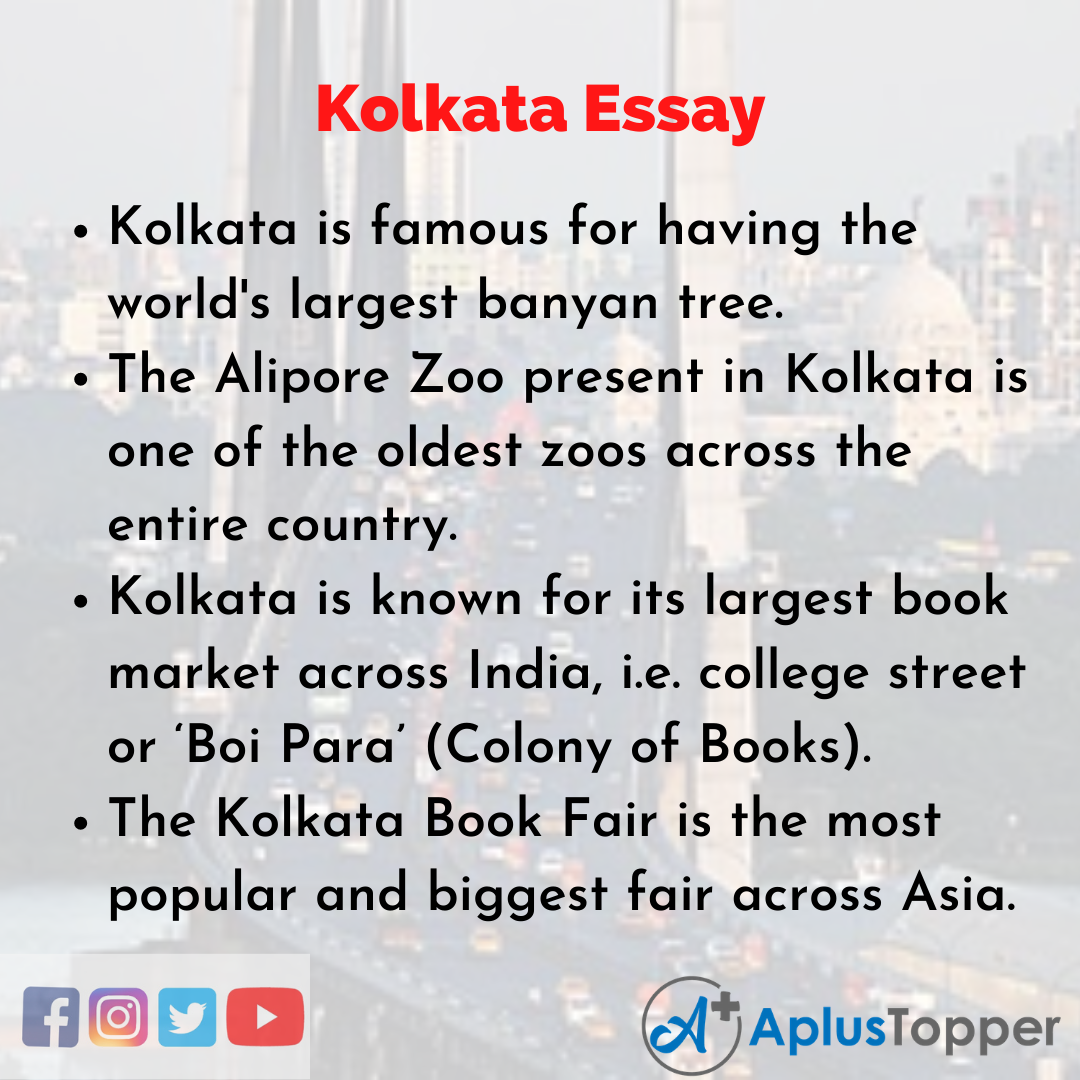 Kolkata is one of the most elegant and beautiful cities across the state. For around 138 years, it was termed as the capital of British India. It is also widely known as the city of joy. Bengalis dominate this city.

Back in 1947, before the partition, Bengal province included the East Bengal or Bangladesh. Bengali is the primary or state language of the city. Besides, this is the home town of several important individuals, including the Nobel Prize winner and writer, Rabindranath Tagore. Few other important and Noble individuals from Kolkata are Amartya Sen, Mother Teresa, and so on.

Kolkata is popularly known for having the biggest national library in India. The most famous and reputed Shantiketan is also situated in Kolkata. Thus, the number of tourists from Kolkata has been increasing exponentially over the years.

Few other famous monuments that play a role in attracting tourists are the Victoria Memorial and the Howrah Bridge.

10 Lines on Kolkata Essay in English

1. Kolkata is famous for having the world’s largest banyan tree.
2. The Alipore Zoo present in Kolkata is one of the oldest zoos across the entire country.
3. Kolkata is known for its largest book market across India, i.e. college street or ‘Boi Para’ (Colony of Books).
4. The Kolkata Book Fair is the most popular and biggest fair across Asia.
5. This city is famous for providing tram services since 1902 by the Calcutta tramways companies.
6. It is also widely known for its unique rikshaws that are hand-pulled.
7. Kolikata has contributed to the formation of the word Kolkata.
8. Based on the census, Kolkata has a literacy rate of 87.54%.
9. One of the biggest football stadia in the world is present in Kolkata, i.e. the Salt Lake stadium.
10. Kolkata is the home to the world’s largest and most famous public library known as the National Library.

Question 1.
When is it known to be the best suitable time to visit Kolkata?

Answer:
It is considered to be best to visit Kolkata from October to March.

Question 2.
Are the hospital and medical facilities in Kolkata good?

Answer:
Yes, they provide a few of the best quality medical or health care services to the visitors.

Question 3.
Are the hotels in Kolkata deemed to be safe for everyone?

Answer:
Yes, the hotels in Kolkata offer all the necessary security and safety measures.

Question 4.
What are a few of the most famous monuments to visit in Kolkata?