Essay on Jaipur: Across the entire Rajasthan, Jaipur is known to be the biggest city. It is also popularly called the Pink City. It got the name of the pink city due to the event of welcoming the Prince of Wales; the town was painted with the colour terracotta pink back in 1876. Sawai Jai Singh has established this place.

Over the years, Jaipur has gained popularity throughout the country. Due to its beautiful hilltops and elegant fortresses, the number of visitors has also increased in Jaipur. It is widely famous for its diverse culture along with the tradition and rich background.

We are providing students with essay samples on an extended essay of 500 words and a short essay of 150 words on the topic Jaipur for reference.

Jaipur is considered to be the capital of Rajasthan. It is famous across the country for its rich tradition and diverse culture. The variety of forts and palaces showcase the exciting history of Jaipur. This city was formed by the Maharaja Sawai Jai Singh II know as a great warrior in the ancient times.

Although initially the capital of Rajasthan used to be Amber but considering the safety viewpoint, the capitals were changed later on. Since several construction and architecture were painted with the colour terracotta pink back in the earlier times, the name of the city popularly became the pink city.

This city has been trendy amongst the visitors since earlier times, due to the availability of several famous hotels. One of which is the Raj Vilas which is known widely due to its beautiful architecture. These palaces in ancient times belonged to the kings and their families. Therefore, all of these hotels have a bit of royalty in them.

Several locations in Jaipur are exquisite and have glorious architecture. For example, the widely recognized Raj Mandir Theatre. This place is usually crowded up with people across the world. This is a cinema hall that is created with magnificent interior and exterior design.

This cinema hall was created back in 1976 by W.M. Namjoshi. The cost, along with the beauty of the hall, is continuously maintained. Therefore, many visitors get attracted to this city. Besides, the Zoological garden in Jaipur is popular for its biggest breeding centre for crocodile in the country.

The capital of Rajasthan, i.e. Jaipur, is famous and is considered one of the best cities under the top ten throughout the country. Besides, it is the biggest city across the entire state of Rajasthan. There are several sightseeing locations present in Jaipur that are popular amongst the visitors.

One of the most important and topmost manufactures and exporters of camel leather, textile, handicraft, quilts, brass enamels, and so on. This city is widely famous for its art and culture that has gradually been combined with newer technologies and now lead to increased growth in the rate of export. Thus, the importance of Jaipur as a tourist location is growing exponentially.

This city is also known best for the setups of any corporate. Some of the leading IT’s and MNCs are present in Jaipur. For instance, Deutsche Bank, Genpact, Infosys, Reliance, and so on are prospering on their business rapidly.

Besides, it is also included as a part of the “golden triangle”. The GDP of the city and the state benefits from the increased tourism in Jaipur. There are numerous prestigious universities and colleges present in Jaipur. Many people also visit Jaipur for its renowned colleges. It has also seen a maximum literacy rate of 77%. 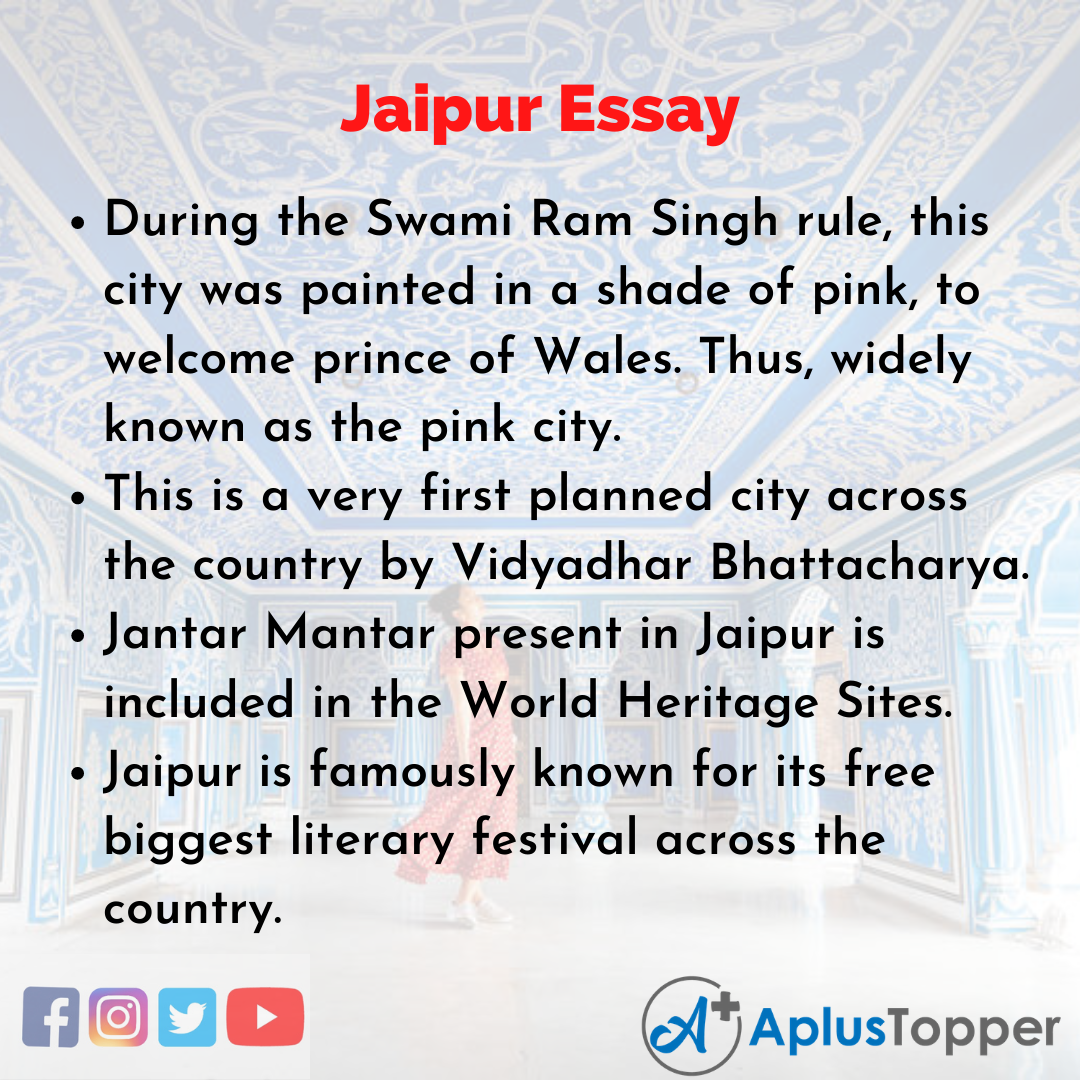 Jaipur is widely known for being a tourist destination due to its beautiful features and attractive architectures. For instance, the Govind dev Ji temple is popular for its elegance. This temple has been included in the Gunnies’ book of world records due to its amazing and huge structure.

A total of 5000 devotees can easily be accommodated in this temple. The temple takes up around 15.827 sq. km feet area. The creation of this temple took place back under the rulership of Maharaja Sawai Jai Singh II.

Besides, it is also popularly known for the presence of numerous well-recognized and exquisite hotels. Some of these hotels or palaces belonged to the kings and their families which is why it is possible to feel the royalty within it.

10 Lines on Jaipur Essay in English

1. During the Swami Ram Singh rule, this city was painted in a shade of pink, to welcome prince of Wales. Thus, widely known as the pink city.
2. This is a very first planned city across the country by Vidyadhar Bhattacharya.
3. Jantar Mantar present in Jaipur is included in the World Heritage Sites.
4. Jaipur is famously known for its free biggest literary festival across the country.
5. It is the home to the most beautiful and highly recognized Hawa Mahal.
6. Jaipur is included as a vital part of the Golden Tourism Triangle throughout the country.
7. This city is best known for its City Palace that has been created by the Sawai Jai Singh.
8. Some of the most prestigious and famous hotels in the world are present in Jaipur.
9. One of the largest circular parks throughout Asia is created on a highway traffic circle.
10. Jaipur is also widely popular for its architecture, forts, and monuments. 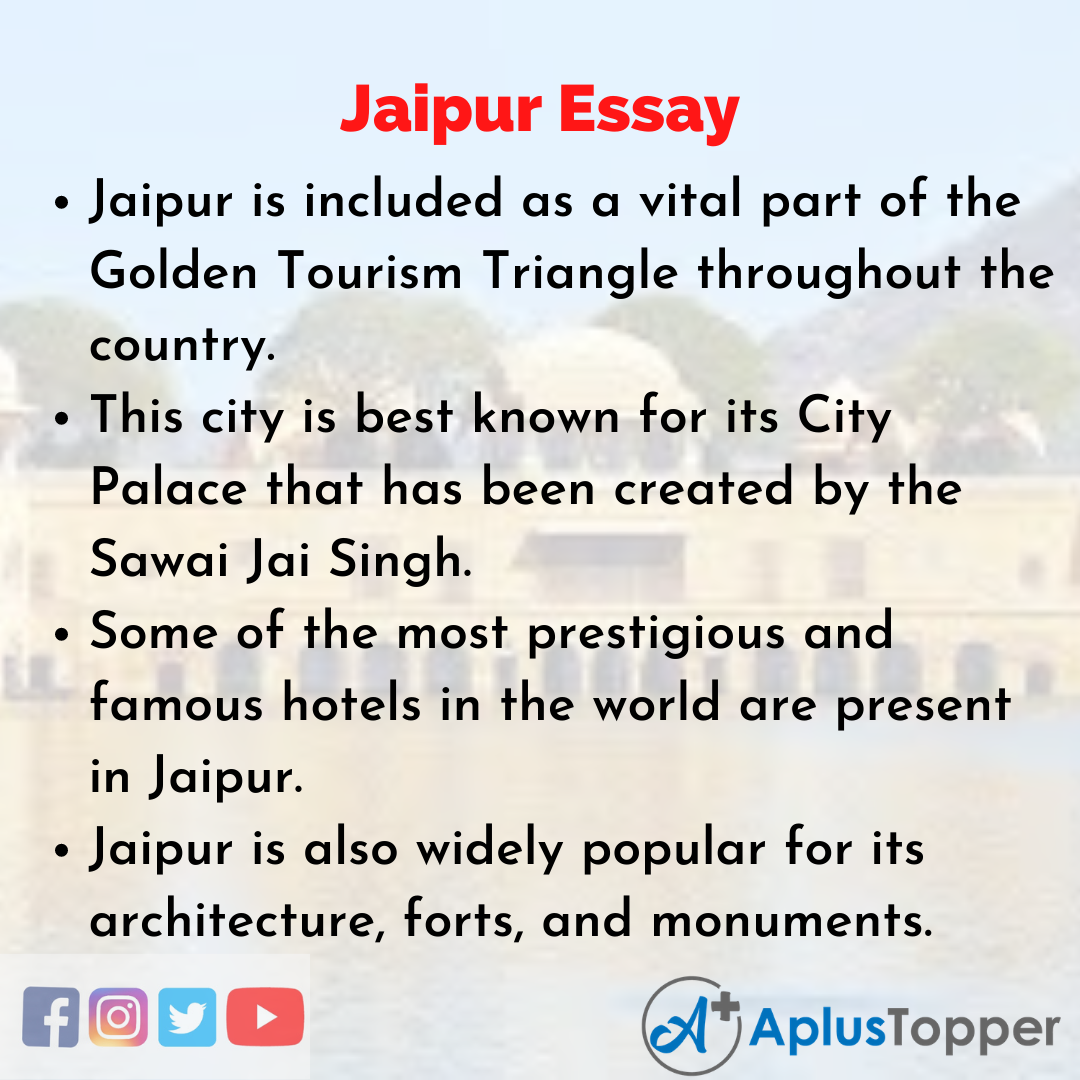 Question 1.
Which are the most famous places present in Jaipur?

Answer:
Few of the places that are highly famous across Jaipur are City Palace, Hawa Mahal, etc.

Question 2.
What is the climate of this city?

Answer:
The climate of Jaipur is normally very pleasant during the winters whereas it is comparatively hotter in summer.

Question 3.
How much area is taken up by Jaipur?

Question 4.
Which types of food are popular in Jaipur?