Industrial pollution started from the early 1700s when the use of coal started, the constant burning of coal filled the air with smoke. Coal at the time was the easiest to the source, cheapest, and most efficient way of powering industries. The revolution had created tons of jobs for people thereby creating one of the fastest employment rates at the time. The industrial revolution created the worst quality of life for the poorest people as a lot of them used to live near the factories, therefore the people that lived there had to breathe in the heavy fumes produced by the factories.

It is usually the working class that is affected by industrial wastage and the upper class gets to stay away from it. The industrial revolution had made people realize they could have better labour laws and also have better lives for themselves. The pollution from these factories is still quite prominent today and now it affects even the big cities and everyone that lives around it. 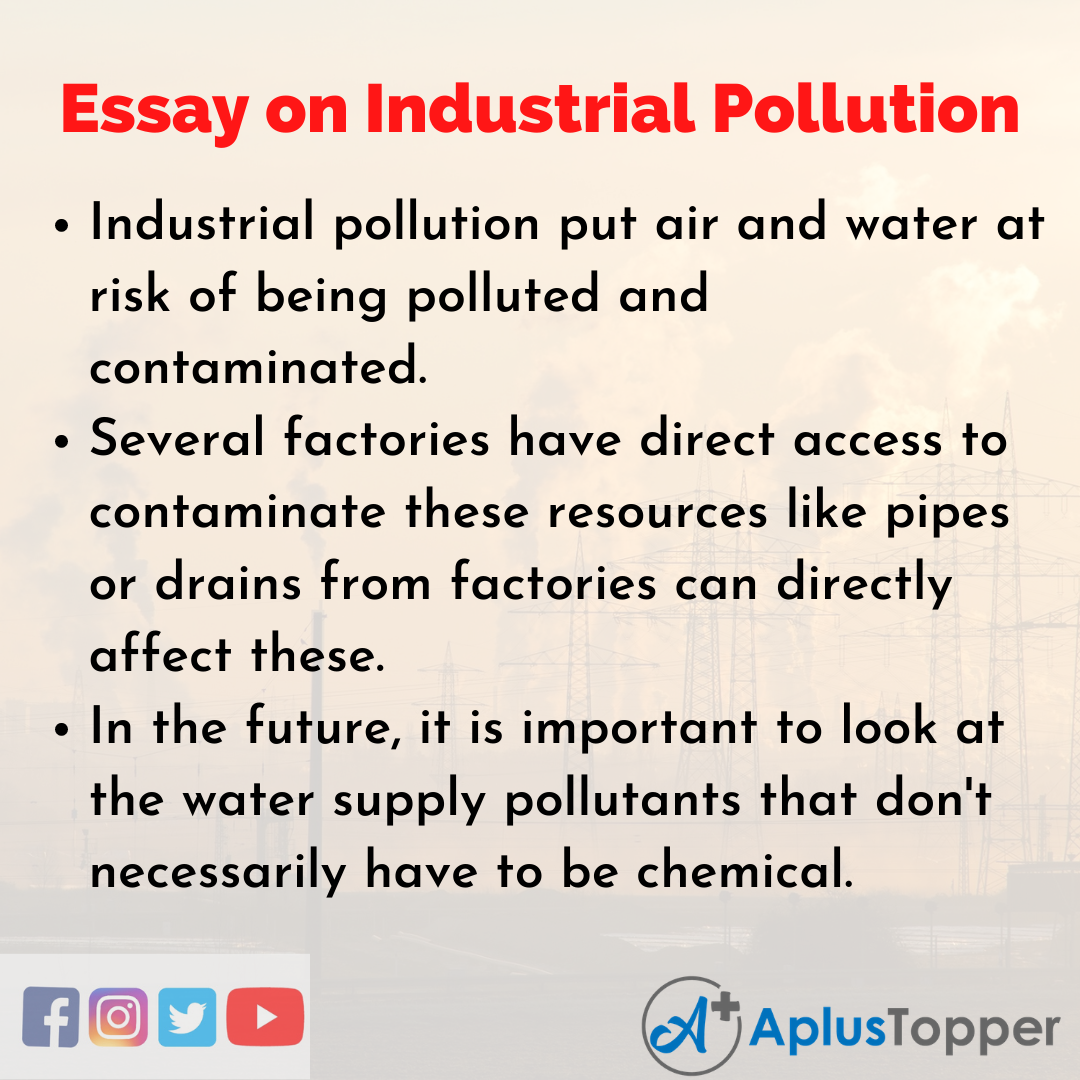 In the 21 century with so many technological advancements, the manufacturing sector still produces highly toxic waste that isn’t healthy to be around. Most of these factories produce the same corrosive waste that could be dangerous to humans if constantly exposed to. The construction industry is said to produce the worst wastage which includes poisonous solvents, abrasive, gypsum, cement, and various metals. In the food chain industry, there are a set of contaminants known as polychlorinated biphenyl which are usually from various lubricants, adhesives, and plastic wrappers. There is also a high rise in thermal pollution caused by the amount of hot water discharged by these factories. The water changes the level of oxygen levels on most of the water bodies, thereby directly affecting the life in these water bodies as well. The ecological balance is completely off-put as it kills o various plants and animals in the process of increasing thermal levels.

Industrial pollution is one of the main causes of air pollution around the world right now. The number of industries is increasing at a very fast rate and this also means a direct increase in air pollution.  Large amounts of nitrogen, sulfur, carbon dioxide are released which can affect us in the long run as well.  There are various effects because of these toxic pollutants present in the air such as skin disorders and acid rain. 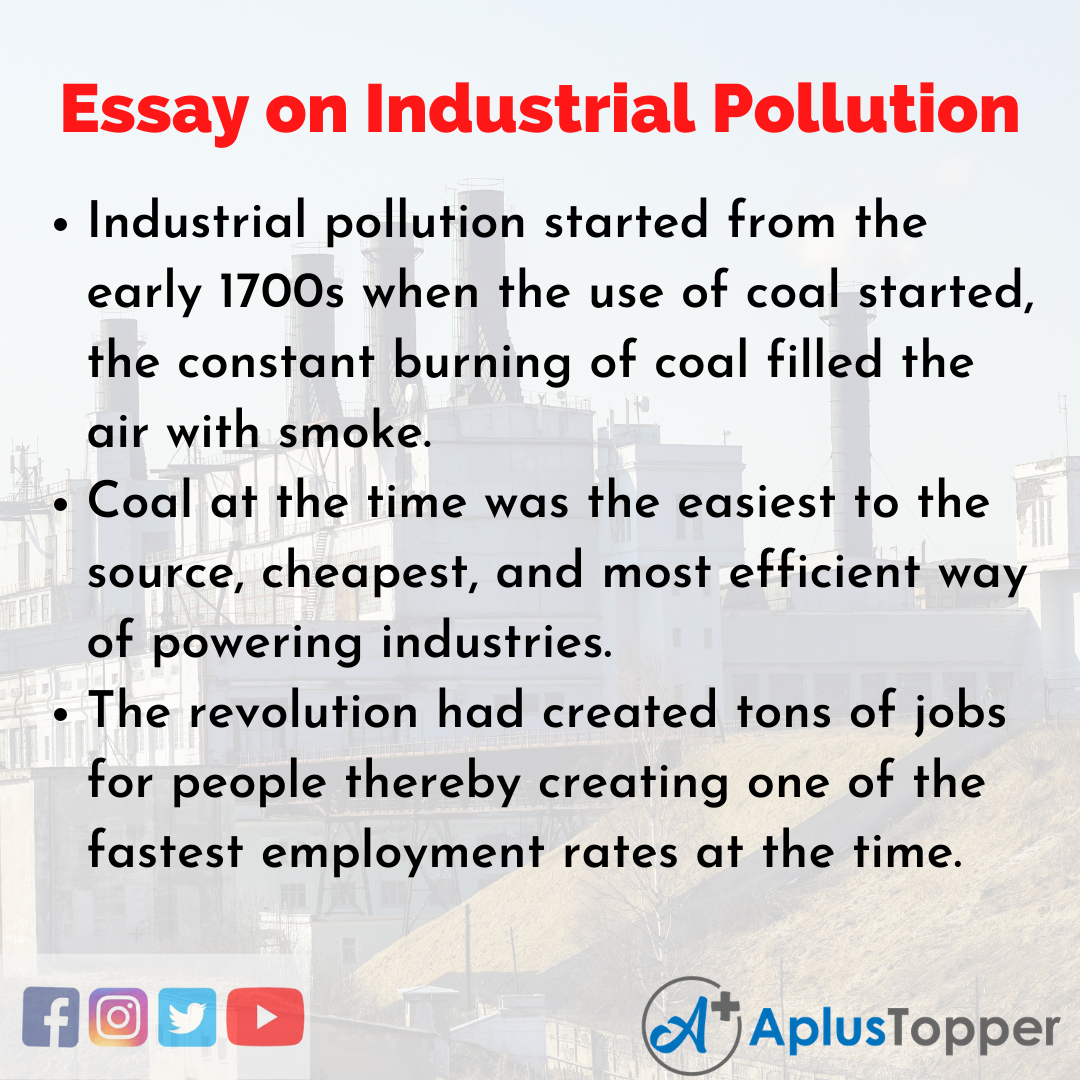 Industrial pollution put air and water at risk of being polluted and contaminated. Several factories have direct access to contaminate these resources like pipes or drains from factories can directly affect these. A huge misconception is that toxic that are entered into the water bodies are usually at a very low concentration but the problem doesn’t lie there, the various organisms that are present in these water bodies absorb them in their tissues and this moves up the food chain thereby creating a vicious cycle and killing most of the organisms. This just doesn’t affect the organisms in the water bodies but also the humans that consume the fishes from these water bodies thereby put their health at risk. In Japan, in the 1950s and the 1960s, there was a huge problem where thousands of people were affected by the fish they ate that contained mercury waste. This mercury waste was present because of the waste coming out of a nearby chemical factory.

In the future, it is important to look at the water supply pollutants that don’t necessarily have to be chemical. A lot of the industrial process generates heat and uses a lot of water for the cooling, it does so by drawing from the nearest river or lake and once it is returned to its source it should be cooled beforehand to not increase the water temperature.  The warming that is created artificially can have serious implications on the ecosystem and it is very important to look at. The aquatic organisms are the ones most at risk because of the rise in the temperature they will find it hard to quickly adapt to the rapid temperature in water.  By increasing the temperature so rapidly the species are at high risk and as they won’t be able to access enough oxygen. Increasing the temperature also creates unbearable living space for the aquatic animals and also the plants present. Oxygen solubility deteriorates at rising temperatures which put organisms in dire need of oxygen at this level

The government must consider the biggest factors of the industrial pollution that is global warming. These various greenhouse gases like methane and CO2 act as catalysts with various industries to increase the temperature of the planet. The implications of global warming are quite far-reaching as well, as it can affect not just the environment but human health as well. Global warming and industrial pollution together cause the water level to rise within water bodies and the oceans. The meeting of snow caps in mountains and glaciers all this increases the chances of floods. Global warming with industrial pollution has many direct effects on humans as well including diseases such as malaria, Lyme disease, cholera, dengue, and the plague.

Industrial pollutants produce a lot of smoke and smog which is now lesser in more developed nations because of the various norms set in place to control it. The biggest pollutant to affect the quality of air is volatile organic solvents, metal dust, and sulfur dioxide. The burning of waste also has created major problems over the years and this is mainly because of the various dioxins and hazardous chlorinated compounds that come from the burning of materials such as plastic. It is usually the sulfur emissions that produce acid rains and are very harmful to us.

Industrial pollution also contributed to a significant amount of global warming and is one of the reasons why we are facing high temperatures. We must make people aware of these problems and fight industrialists to reduce their emissions and go green with a lot of their process. It is not just affecting our planet but currently, it is affecting people’s lives. So it is important to inform people of these problems so that we can fight for our future.