Essay on Indian Politics: Politics, usually associated with terms like muddy waters and dirty games is a necessary evil in a democratic system. In fact, it is a necessary evil in any form of governance systems. In this essay on India politics, we shall be talking about the various dynamics, good things, as well as bad things about Indian politics as well as recommend certain solutions.

The examples on essay on Indian politics here will be provided with abundant information and high-quality writing that students and children from colleges, universities and schools can use in their essay writing competitions, assignments and tests.

Essay on Indian Politics is helpful to students of classes 6,7,8,9,10.

Politics in any country involves the ruling party and the opposition. Usually and ideally, political parties are formed based on the same line of thinking and ideology. The left and the right are the two terms usually used by media and political commentators to define the group of people with the same ideological bend of mind.  The lefts are usually considered liberal, secular and pro-government ideologies while the right is considered majoritarian, pro-poor and rebellious in nature.

And for a perfect democracy to work, both the ideologies are necessary. A mature democracy is one where there is a fine demarcation between the two ideologies, but in countries like India, these demarcations are blurry and the left and right ideologies superimpose on each other often number of times.

The political system is built in such a way that, irrespective of what ideologies, policies, processes, institutions, strategy, behaviours, classes or diplomacy that a political party follows, the core vision and objective lie in the development of the country.

But, like always, not everything that glitters is gold, is it not?

Politics is called a dirty game and rightly so, especially in a country like India. Greed, corruption, injustice, bigotry and hatred are some of the very few terms that are usually associated with Indian politics. In this essay on Indian politics, we will not be able to talk about it all, but we will try to touch upon each of the issues.

Politicians usually choose their parties, not because they believe in the ideologies of the party, but because of the winnability quotient in the elections. Elections, unfortunately, is all about money power and muscle power. The ideologies and promises are just the sugar coating that politician do to get votes from people. But even if they follow the ideology of a party, the ideologies itself is flawed and broken from its core. Divide and rule policy followed by the British to rule India is followed by today’s politicians to get votes. Political parties, across the spectrum, try to divide people of India on the basis of religions and class. This is usually called by the term communal polarisation. The gullible voters play into the hands of these political parties and belive the fancy promises they show in the name of development. In a good democratic system, a common man should also be well aware of their rights and responsibilities as a law-abiding citizen.

A good politics consists of the government and its opposition, with both of them working for the development of the country, in their capacities. The opposition parties questions criticise and demands accountability from the ruling party so that the ruling regime is kept in check. The system works fine in its idealistic form. But political parties, with their greed for power, forget their true responsibilities and indulge in dirty games to grab power at any cost. That cost is borne by the common man of the country. 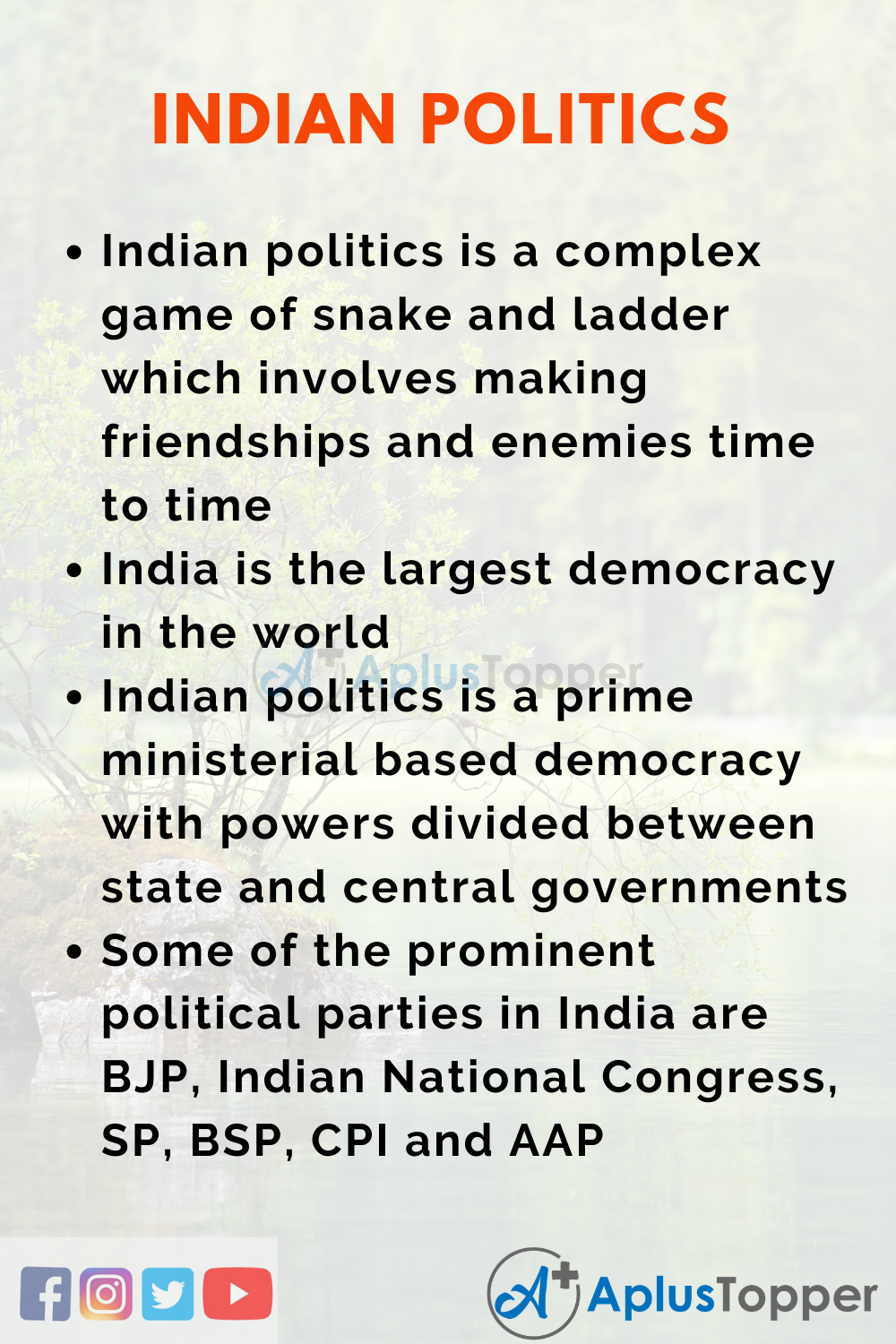 Below, we have provided a 200-word short essay on Indian politics is helpful to classes 1,2,3,4,5, and 6. students can make use of in test and examinations.

Indian politics is a colourful drama and most famously called as the great circus of the country. Different political parties like the BJP, Indian National Congress, SP, BSP, AAP etc fight for their rightful seats in the parliament. Indian politics is not just about fighting for seats and gaining power but is much larger than that. The political climate in the country gives birth to the economic, social and communal stability of the nation.

If the political atmosphere is not proper, then it would be difficult for the economic development of that country. Political greed can also lead to anarchy and civil wars as seen in Syria, Libya, Egypt, Hong Kong and Malaysia in recent years. Wrong leaders having all the power in the country can lead to such disturbances which will further lead to loss of property and lives.

Some of the prominent instances that defined and changed Indian politics are the 1975 Emergency, India- Bangladesh war,  Godhra riots, Ayodhya Ram janmabhoomi, 26/11 terror attacks, 2014 general elections, CWG scam etc. As its right called, politics in India is a colourful game, with both good and bad things happening simultaneously.

Right from Jawaharlal Nehru to Morarjee Desai and Manmohan Singh to Narendra Modi, India has seen its political maturity evolve over time and hopefully, this progress is in the greater interest of the development of India. 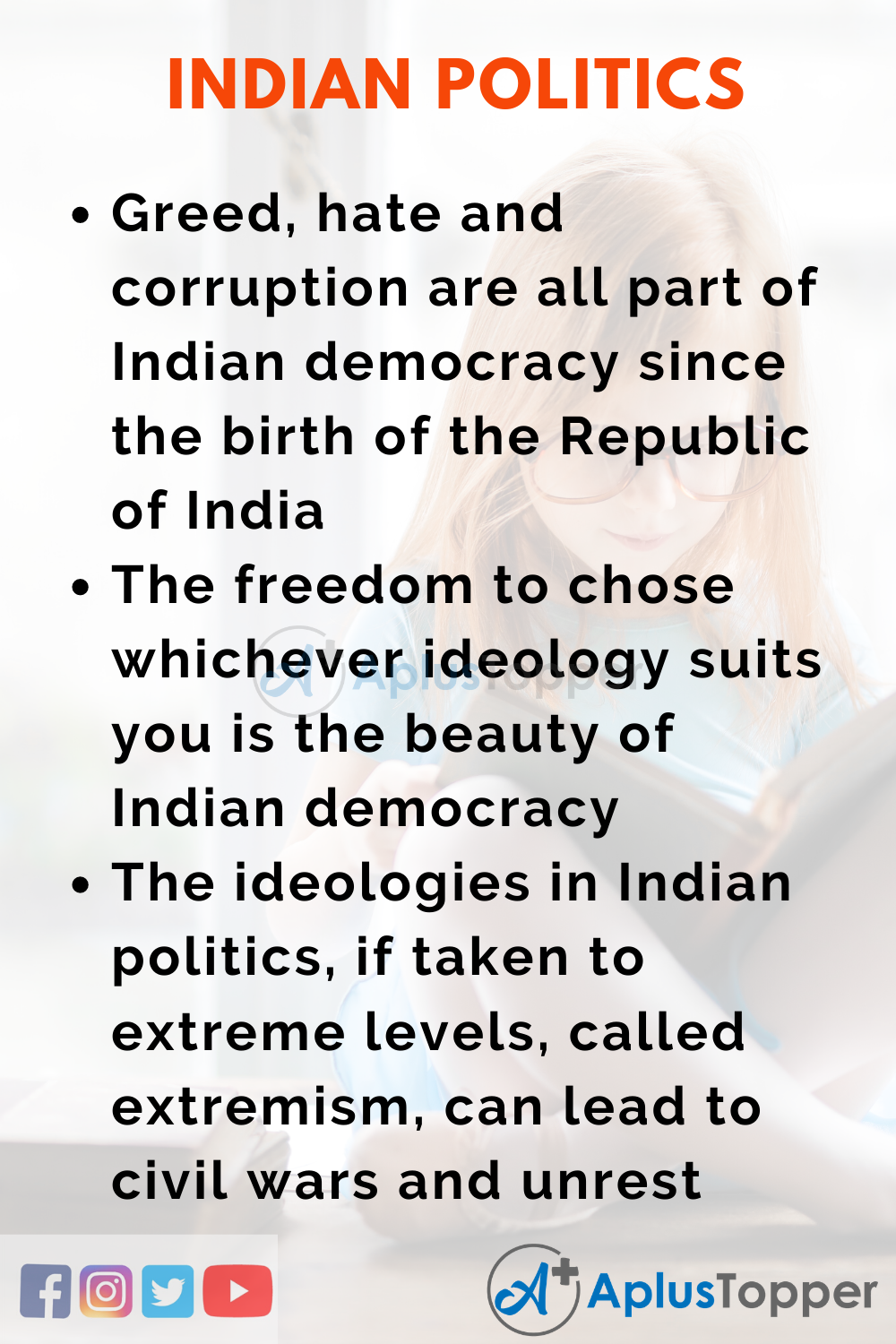 FAQ’s on Essay on Indian Politics

Question 1.
Which is the biggest political party in India?

Answer:
The Bharatiya Janata Party (BJP) is the largest political party in India

Question 2.
How many political parties are there in India?

Question 3.
What is the problem with Indian politics?

Answer:
Greed for money and power, corruption, communal polarisation and lack of education are some of the problems facing Indian politics

Question 4.
What are the four types of politics?

Answer:
Oligarchy, aristocracy, monarchy and democracy are the four types of politics in the world