Essay on Indian Gate: One of the most popular tourist destinations in India is the India gate. A war memorial that was built after the first world war, is an iconic destination in India which is not just a tourist hotspot, but a place where revolutions and civilian protests take place that has changed the course of the nation is many ways.

In this particular India gate essay, we will be talking about the origin and what India gate in the 21st century stands for and the values and principles that it represents to today’s people of India.

We have provided below a 600-word Long India gate essay for students and children of classes 7,8,9 and 10 that will help them in their tests, assignments, project works and essay writings.

India Gate, a famous tourist spot and a war memorial built for the soldiers martyred during the first world war, is situated in the heart of the capital of India, New Delhi. Inaugurated in the year 1931, February, India gate, built by a famous architect of those times Edwin Lyutens, is the testimony of the architectural prowess of the country.

Known for its state of the art architectural design, it took almost 10 long years to build India gate. It is a 42m in height and 9m in width monument. Built with granite and yellow and red sandstone, India Gate is an embodiment of Arc de Triomphe de I’Etoile in France, Paris.

India gate was originally built to commemorate martyrs of the British India Army who fought for their motherland against the enemies during the first world war. It also commemorates the martyrs of the Bangladesh liberation war in the year 1971. Amar Jawan Jyoti which is an integral part of India gate was built after the India-Pakistan war and was inaugurated by the then Prime Miniter of India, Indira Gandhi.

Other than the facts of the India Gate, the monument is fondly loved by Indians and people across the world not just for its architecture and beauty, but for what it represents for today’s India. Let us discuss, in this India gate essay, a few values that India gate represents.

What does the India gate represent?

There are many stories that can be told about the India gate since it has been in existence for more than 90 years now. In a few years, it will be a centenary celebration for all of us Indians.  One simple India Gate essay will not be sufficient for that. But no matters, India gate will forever be a testimony of the progress of India ever since world war and it’s sacrifices of Indians. 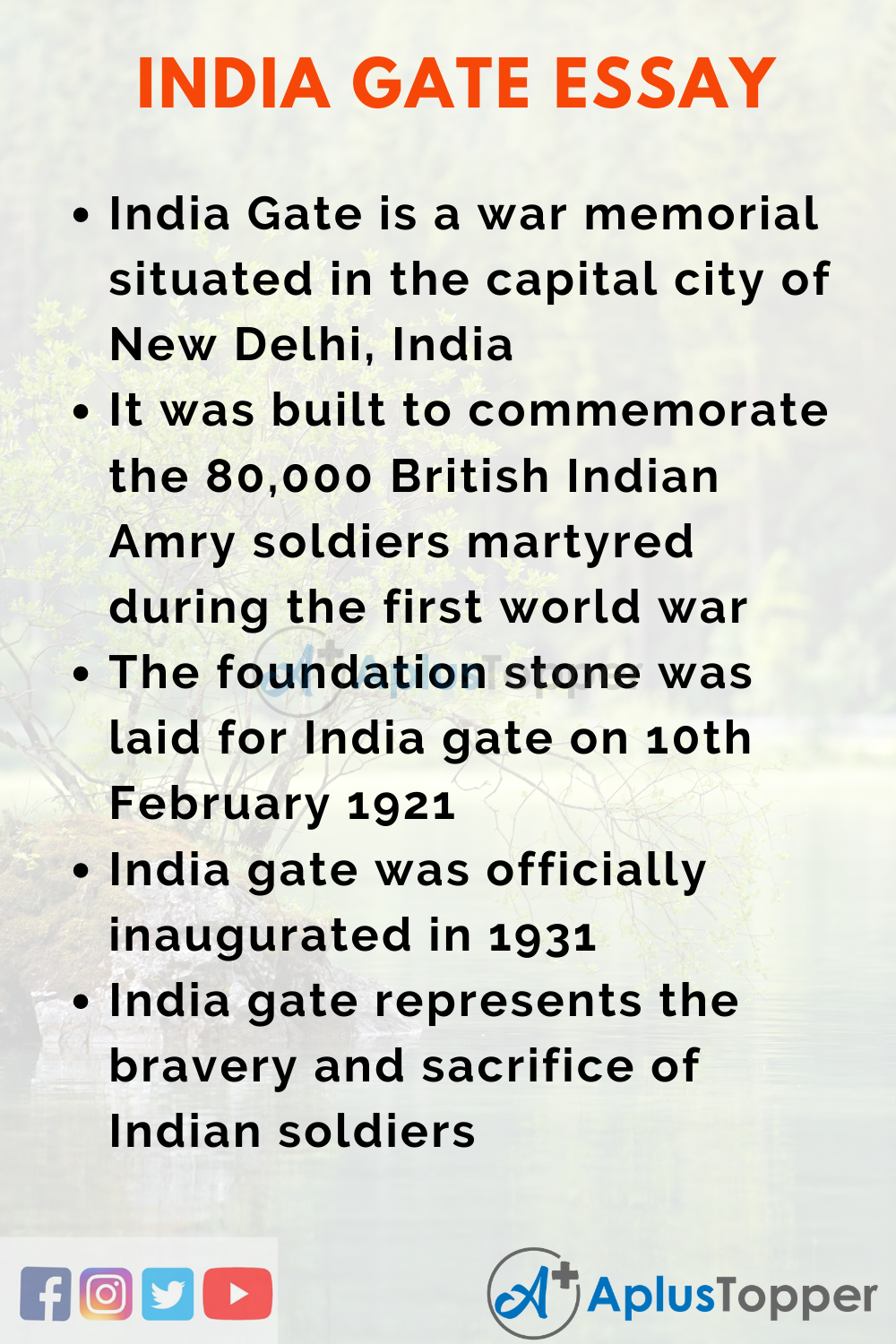 We have provided below a 200-word short India gate essay for students and children of classes 1,2,3,4,5 and 6 that will help them in their tests, assignments, project works and essay writings.

India Gate is a famous tourist destination in the country. It is a monument, built in the year 1931 by Edwin Lutyens, to commemorate the martyred soldiers of the then Britsh Indian Army, who fought for the country during the world war one. After India got its independence from the British Raj, Amar Jawan Jyoti was built to commemorate the soldiers martyred during the Indo-Bangladesh war in the year 1971.

India gate represents the patriotism and nationalism of the Indian people. It is an eternal embodiment that signifies the sacrificial nature of our Indian soldiers and the love for their motherland. FAQ’s on Essay on India Gate

Question 1.
Why was India Gate built?

Answer:
India Gate was built to commemorate the martyred Indian soldiers of the British Indian Army during the first world war

Question 2.
What is written on the India gate?

Answer:
The words “Amar Jawan” is written on all four sides in gold on India Gate

Question 3.
How many names are there on the India gate?

Question 4.
Who built the India gate?