Integration means combining various parts for making them one, and national integration ensures that all the people from multiple cultures, religions, and communities stay together as one. This article contains an essay on the importance of National Integration for spreading awareness about it among various students and ensuring that they understand this matter’s essence. Essay on Importance of National Integration contains multiple facts and benefits and perfect point to promote the same among the future generation.

We provide children and students with essay samples on a long essay of 500 words and a short essay of 150 words on the topic “Importance of National Integration” for reference.

Short Essay on Importance of National Integration 150 Words in English

India is a diverse nation with residents from various religions, cultures, traditions, and communities. Indian citizens have different backgrounds and follow other practices. Still, even after the presence of people from diverse categories, the nation brings all of them together as one and ensures harmony and peace among them. All the Indian citizens consider it a motherland and stand high when it comes to protecting the land and nation, which is evident in India’s immense national integration.

Indian population consists of various people who stay together but still have some contradicting thoughts, opinions, and practices. In such instances, national integration is uncommon, and disunity rises, becoming harsher evils for the society as these issues can destroy the peace and overall growth of the society and tarnish the image of the nation. People from segments might also suffer from some humiliations and lack of integrity in such situations. National disintegration might become a significant cause for the national crises, and partition like it did back when India divided into Pakistan and India. Thus, to avoid any similar incident, we must work together as one unit to ensure national integrity.

There are many instances in the India where we can spot national disintegration, and disunity resulted in the demise of special powers like the Mughal attack in India due to friction between Rajputs and then British invasion due to rising conflicts between various sectors of Indian society. These attacks left the nation’s adverse effects and destroyed the country’s entire economy, the results of which are still witnessed.

Presently, India is an independent nation, and thus it is essential to ensure higher unity among the citizens. There is a need for culminating in the citizens’ minds that all of us belong to one nation and must never disintegrate due to any issue. We must always stay together as a single unit and move forward as a stronger independent nation. In modern India, political integration exists in society. But, there is still room for improvement in emotional integration. And India also needs to achieve the emotional unity and preserve the national integration for better progress sand development of the nation. 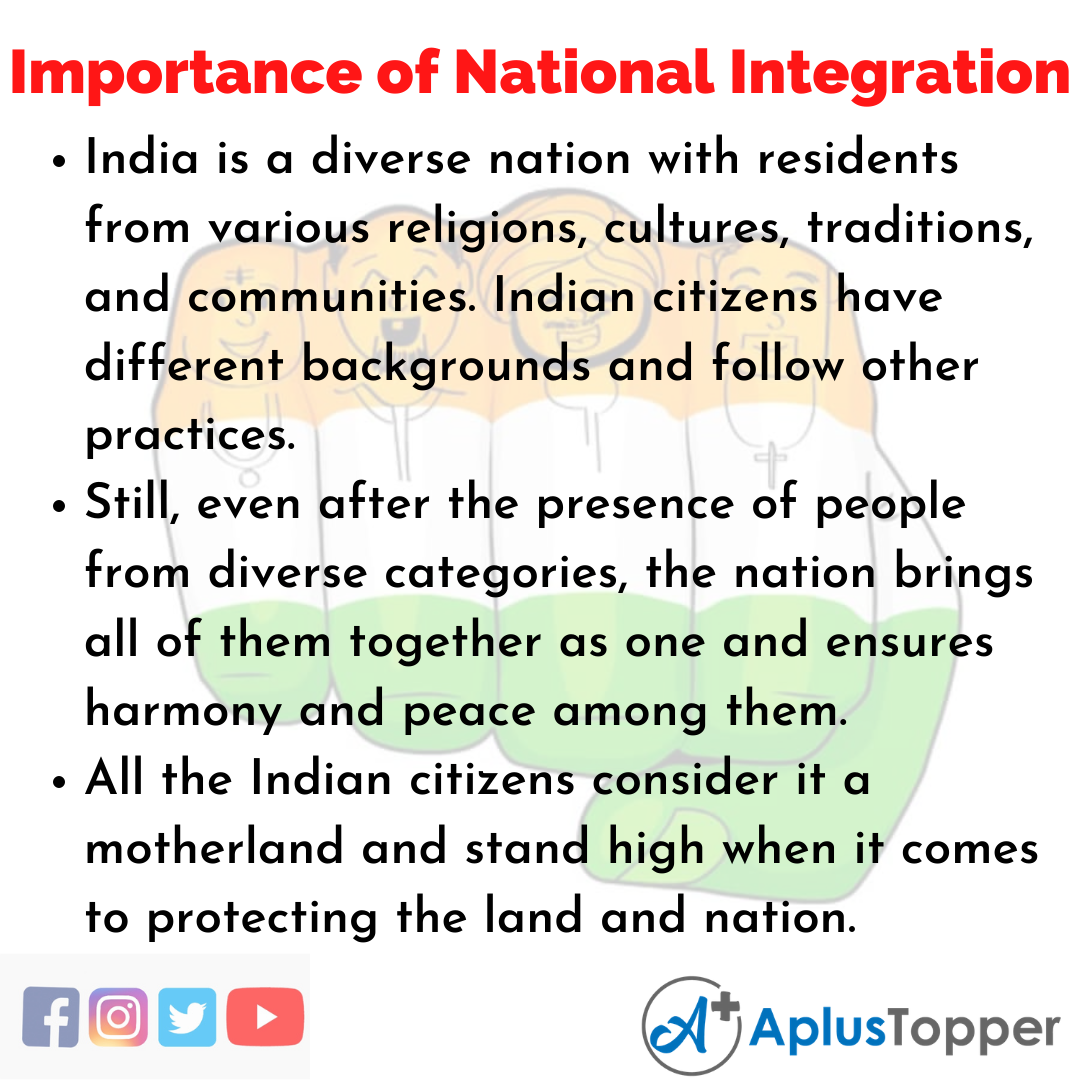 Long Essay on Importance of National Integration 500 Words in English

Long Essay on Importance of National Integration is usually given to classes 7, 8, 9, and 10.

India is a diverse nation with people having different religions, languages, castes, and races. India also exhibits unity and national integration in several instances. This also came out under the influence of familiar territory, history, and a continuous fight for the freedom from British rule. For many years, the British followed the Divide and Rule policy in India to hold their power in the nation and get more ability with the passing time. Soon, they gained authority for making and implementing various rules according to their need and destroyed the nation’s overall economic Independence.

After much time, the Indians understood the need for unity and national integration and stood high and strong to throw the British rule and become independent. When it came to the Independence struggle, people from various religions, castes, demographics, cultures, and communities came together as a single unit. But soon, the disintegration again emerged, thus dividing the country into India, Pakistan, and Bangladesh; the adverse effects of which are still seen in all the three formed nations.

People in India follow different religions and speak different languages. India has around 22 recognized regional languages, including Hindi, English, Urdu, Oriya, Bengali, Gujarati, Kannada, etc. It is also essential to have equality among all the religions and communities, and the same facilities for all the citizens, irrespective of their backgrounds. In the modern period, national integration is an immediate requirement for ensuring equality among all the citizens, higher growth and development of the citizens, and eventually, the nation. Holing to assure National Integration and look to check that all the citizens living in the country have higher co-operation for the fulfilment of various programs, Indian Government found the Council of National Integration under Jawaharlal Nehru’s guidance.

National Integration is the notion of combining all the nation’s groups to make them stand as a single unit. It is a sentiment that binds the people of the country, belongs to various communities, together into a single unit, and has them share the nation’s bond without discriminating based on any factor. Ensuring National Integration means identifying oneself as the country’s people, and not of the diverse communities available in the country. India is a big nation, and the second-most populous in the World. Here there are people from various communities and sectors. India stands as a rich heritage of diverse cultures and traditions, but it is considered 100% nationally integrated and still not acceptable for it. Higher national integration is achievable for India by spreading awareness among the youth as they are the nation’s future generation and responsible for its overall growth and development.

National Integration is the feeling of oneness and unity among the citizens of a nation. This is a sentiment and recognition of being a single unit despite all the differences in beliefs, backgrounds, and practices. It is essential to maintain the peace and prosperity of a nation. India is a country with people living and believing in harmony for better growth and development. Even though its national integration tarnishes in some instances, some measures are taken to make it more effective and ensure it. Promotion and invoking of this sentiment are essential to maintain the status and development of the nation. For a country, national integration plays a key role and is the most critical agenda for maintaining peace among all the citizens. It brings all the people closer, despite their different backgrounds and beliefs and promotes peace and harmony. Ensuring national integration is a greater necessity for the nation’s Government for assuring a safer and secure environment for its citizens.

Many nations worldwide have been unable to be the prominent ones existing on earth, which is due to the inefficiency for better development caused by lack of national integration. In such a nation, people always look for ways to pull each other down and never understand that they are barring and hindering their development that comes from the nation’s development. People here keep on fighting for their agendas and petty issues and do not look at the bigger picture and their entire country as a whole.

Many of the people in nations with lower national integration instigate the other people around them and form groups to promote hatred among people for other existing communities and groups of which they are not the part. This eventually threatens the national integration, peace, and harmony of the country. This is a significant issue that the Government of the concerned nations must focus on and let the people understand the need to let go of the feeling of hatred and disrespect for the other communities.

Even though it is a popular notion that India is a diverse nation with unity among the citizens of different backgrounds, but this is not entirely true. Even after all the attempts of the Indian Government for the assurance of national integration, there are still some sectors where it is lagging. There have been various evident religious and communal riots across the nation for multiple issues and many innocent lives have suffered due to the same. Caste issues between Brahmanas, Kshatriyas, Vaishyas, and Shudras of Hindu community also give rise to lowered national integration. This is because upper castes look down to lower caste and differentiate between themselves. Furthermore, India also faces national disintegration due to rising disputes between different religions and languages and economic inequality and differences.

In diverse nations like India, national integration is essential, and its need is also strongly felt. It can be ensured by eradicating the feeling of superiority and authority among the people of certain groups, communities, and religions, and promoting the sense of oneness and equality among all the citizens. 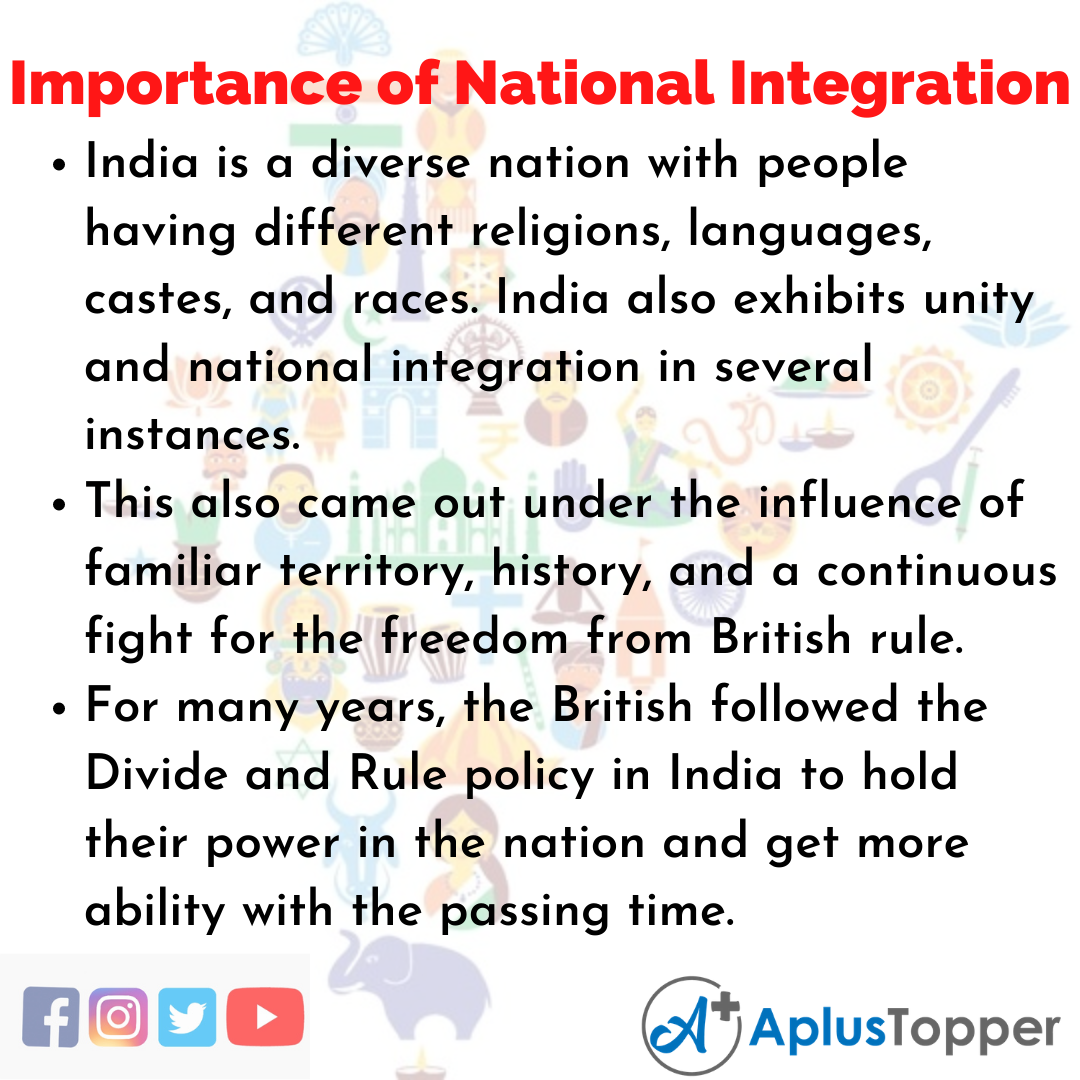 National integration is an influential agenda and plays a vital role in the development of a nation. There is a more substantial need for the same, and the Government also make several attempts to promote the sense of equality and national integration among all the citizens. The article contains essays on the importance of national integration for the students and children of different age groups. This is also meant for spreading awareness about the issue and ensuring unity among the nation’s citizens.