Essay on Impact of Privatization: Privatisation refers to the shift of powers from the government units to private/commercial units. It is also called commercialization. Privatization was a concept that initiated in first world countries and upon success followed by other developing nations. Privatization has both its positive and negative impacts on society. But it cannot be denied that privatization has been why many countries were saved from going bankrupt.

Many countries, including India, have been through privatization at the need of the hour. India went through privatization in 1992. After the economic depression in India, the government finally decided to hand over ownership to private sectors. Introduction of commercialization made it possible for foreign conglomerate companies to start investing in India. Companies like Coca Cola and Pepsi saw massive success in the Indian market after privatization.

The Indian companies, which were privatized, enhanced their products and focused on getting more profit. At this time, the working-class citizens’ financial conditions improved who looked for better outcomes in the industry. Privatization also led to an increase in job demand and fulfillment. People with average income and the strata of the middle class experienced a betterment of lifestyle. Because of privatization, the Indian economic conditions enhanced.

Advertisements in television and print largely popularised privatization. The era of privatization in India saw an innovative way of development. Companies like Amul, Diary milk, etc. ran ad campaigns to promote commercialization subtly. However, privatization was experienced by first world countries in the beginning after the great recession. India accepted the concept when the economic conditioned of the government worsened.

Privatization also has vast drawbacks on a nation. Due to the introduction of this concept, the significant negative impact led to losing transparency. Private companies were not bound to let people know what and why they are doing. This led to an unreasonable price hike. Privatization led to an increase in corruption and bribery. Private sectors focused mainly on profit gaining and thus often bribed government officials to get an easy way to cheap products. Privatization thus led to the dropping of product quality in all levels.

Privatization, to some extent, led to undervalue of customers. Although customers play the most prominent role in a market system, privatization led to the dropping of quality products catered to the customers. People experience a price hike with low-quality products. Privatization can be thought of success to the upper class and middle class. But the lower class of society experience worsened conditions of lifestyle. With the increase in price beginning from products to institutions, the lower class found no gain.

Privatization did enhance the economic conditions, but the drawbacks cannot be denied, every concept comes with two sides of benefits and disadvantages. It is upon the consumers how they use an idea for their benefit. A nation as a whole tends to experience profit from the concept of privatisation. But the internal minute factors may or may not be benefited much. Thus, it becomes like the two sides of a coin. 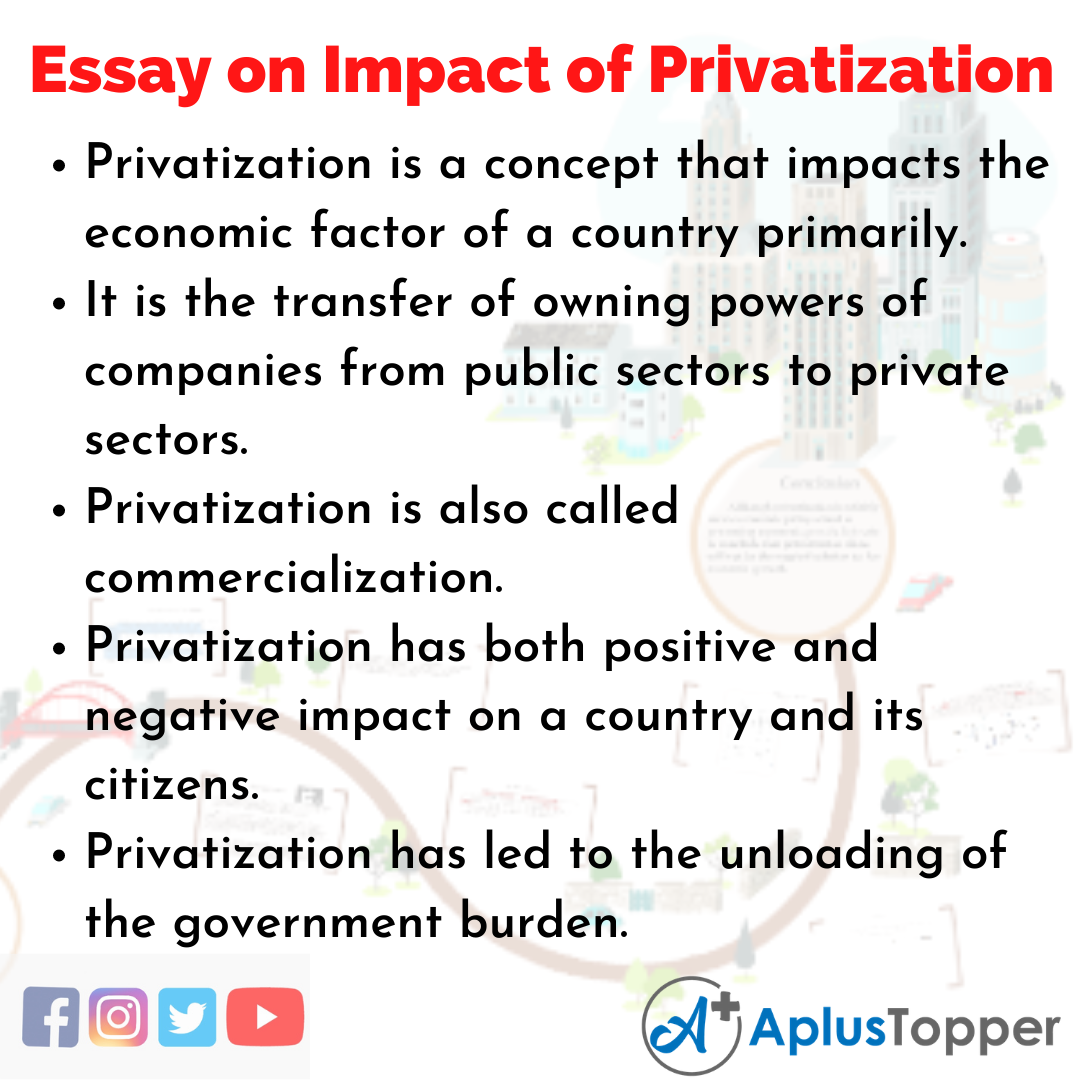 Privatization is an economic and societal process. It is basically the transfer of ownership from a public sector unit to the private sector. The companies going through privatization often have the denotation of private limited. Privatization is also called commercialization. Public owned companies collect fewer revenues that are not enough to have a smooth-running nation. Privatization enables companies to focus on profit and earn better.

Privatization can have both a positive and negative impact on a nation. On a positive note, privatisation has resulted in the decline of government debts from other countries. It has also developed the quality of services and products catered to the public. On a negative note, privatization has also resulted in dropping product quality because a private company aims mainly to gain profit. The emergence of private sectors has reduced the transparency leading to an unclear picture to the public. With drawbacks and benefits, privatization has been a success in developing nations. Thus, the impact cannot be wholly positive or negative.

10 Lines on Child Trafficking in English Question 1.
When did privatization happen in India?

Answer:
India went through privatization in 1992. It was at this time when the public sector companies became private. During the process, some foreign companies also came to India and gained popularity.

Answer:
Privatization is a concept of economic freedom. It is not a necessary process that must be introduced in every country. But countries under debt can go for it.

Question 3.
How did privatization affect the products?

Answer:
Due to privatization, the companies focused on gaining profit. In turn, the quality of the products saw a gradual decline.