Essay on Hyderabad: Hyderabad is a widely famous city present in the Telangana region. It is situated at an altitude of 541 meters above on the decan plateau. It is also one of the most highly populated cities. Besides, it is mainly recognized for its rich background, cuisine, multilingual culture, etc. It was initially established near the Musi river banks, which is now referred to as the old historic city.

We provide students with essay samples on a long essay of 500 words and a short essay of 150 words on the topic Hyderabad for reference.

Hyderabad is a large and famous city across the state. The city covers an area of 650 sq. kilometres. It was established by Qutb Sahi Sultan Muhammed Quli Qutb Shah in 1591. It is known to be the capital of Andhra Pradesh.

This city is separated from Secunderabad by the Hussain Sagar. The population of Hyderabad is around 8 million. It is termed as the 4th populous city in India. However, the metro city population is predicted to be over 9 million.

The people in this city belong to various religions and cultural backgrounds. It includes Christians, Muslims, and Hindus. The twin city of Hyderabad, popularly referred to as Secunderabad, is divided from each other by the Husain Sagar.

There are several types of people with various languages, dress-up, religion, and so on. A few of the common religions in Hyderabad are Hindus, Sikhs, Christians, and Muslims.

The languages that are widely used in Hyderabad are Urdu, English, Telegu, and English. Besides, this city is known as the safest city across the world. Also, the rates of crime are meagre in Hyderabad in comparison with other cities. Thus, it is considered safe to go out on the street, whether night or day.

This city is quite famous for its various industries, including information technology. A few of the essential companies include cigarettes, textiles, and pharmaceuticals.

Besides, the service activities are also increasing exponentially, special the ones related to IT. Thus, it’s prominent in the city’s economy. The number of tourists in Hyderabad have also grown drastically over the years.

The city is also primarily related to creating several films in the Telugu language, which is also referred to as Tollywood. The intercity transport facility of Hyderabad is known to be good.

There are other services like rail and air to Kolkata, Bangalore, Mumbai, and Chennai. Also, to the historical sites such as the Ajanta and Ellora caves in Maharashtra. However, Hyderabad’s transportation enterprise has fallen behind due to the drastic growth of the population resulting in the common heavy traffic.

Charminar is one of the most incredible places to visit in Hyderabad. The name originally means four minarets. It is created using granite and limestone completely along with four minarets on the four sides, respectively. All of these minarets face different streets.

Thus, the monuments elegantly showcase the Indo-Islamic architecture of ancient times. This area is completely covered by stalls that usually sell various things, including perfumes, pearls, handicrafts, and foods or snacks, including kababs, biriyani, and Irani tea.

Golconda Fort is very popular amongst the tourists. It has a 10 km wall bordering around it. Although, presently, the fort is primarily the ruins. But it still displays majestic and unique architecture.

One of the biggest and sophisticated film studios recognized worldwide is the Ramoji Film City situated in Hyderabad. It is also popular for its wildlife conservations like the Manjira Wildlife, etc.

The most beautiful humanmade lake is also situated in Hyderabad, referred to as the Hussain Sagar. In the middle of the lake, a Buddha completely created of white granite is situated. One of the things that makes Hyderabad more popular is its combination of multiple cultures of people. There are several languages spoken in Hyderabad. So, the native people living in Hyderabad can normally speak English and their local/native language.

Since a variety of people live in Hyderabad, it indicates the combination of religions as well. Therefore, Hyderabad is the home to several mosques, Hindu temples, elegant churches, and beautiful architectures of Gurudwaras.

The city’s security measures are very strict and continue to improve to ensure the complete safety of the people in Hyderabad. Besides, safety measures have become very strict at sensitive locations.

Besides, one of the things that contribute to attracting tourists is its variety of cuisine. One of the most famous cuisines of this city is known as the Hyderabadi Biriyani. Other popular cuisines include the Lukhmi, Hyderabadi Haleem, and so on.

10 Lines on Hyderabad Essay in English

1. It is the home to the largest Buddha statue, which weighs around 450 tons and has 18 meters.
2. It is the place where the Kohinoor originated in the past.
3. Ramoji Film City, situated in Hyderabad, is one of the largest film cities across the entire world.
4. It is also widely known for its Persian brand of tea, referred to as Irani Chai.
5. It also has fish medicine, which is said to cure several asthma patients.
6. It is also popularly referred to as the city of pearls.
7. Hyderabad has some of the best wildlife conservation parks.
8. It is also called the city of lack since elegant lakes cover it.
9. It is home to several prestigious institutes and universities.
10. The environment of Hyderabad is continuing to improve and become greener each day. 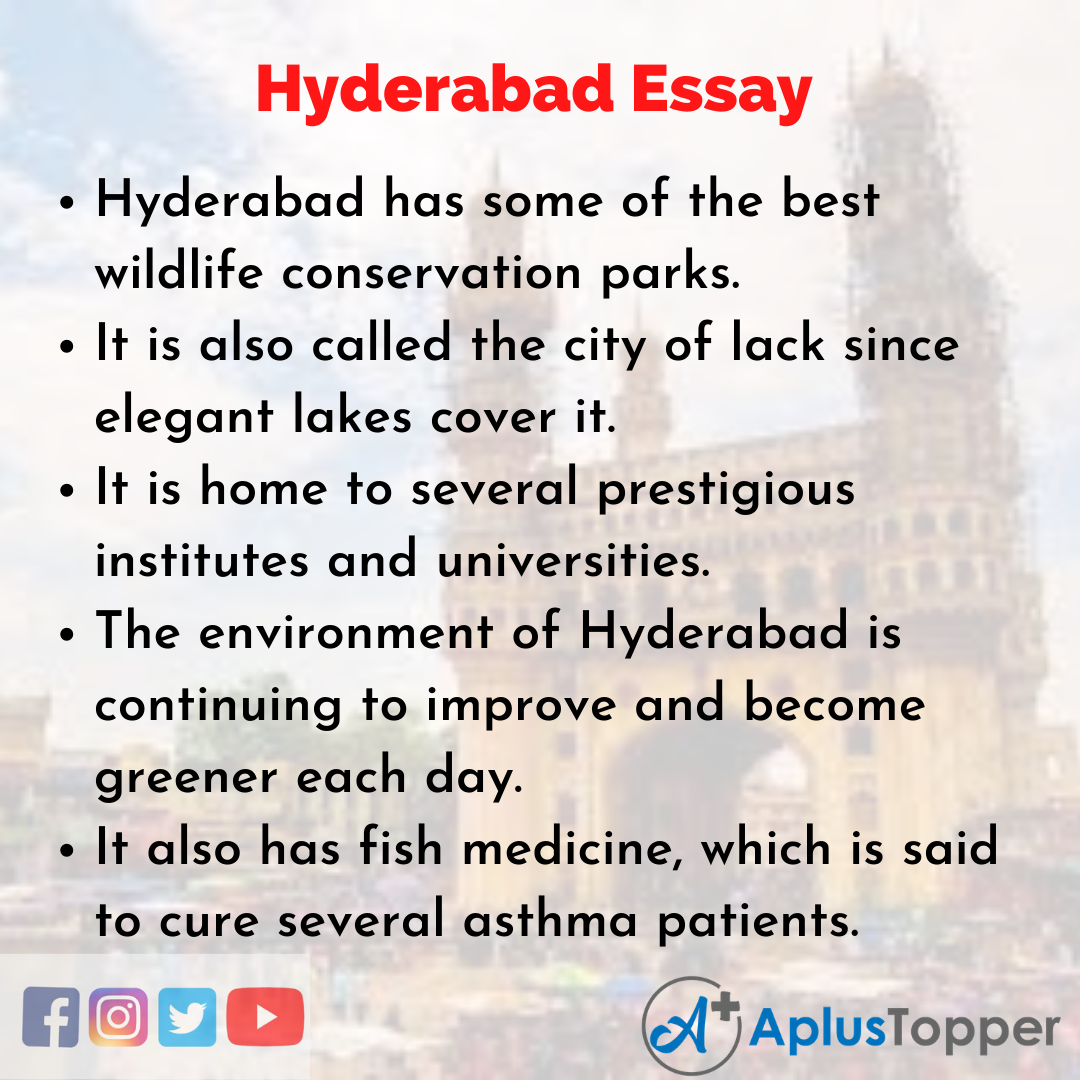 Question 1.
What is the most popular thing about Hyderabad?

Answer:
It is widely acknowledged for its beautiful mixture of modern and traditional aspects. The cuisine is also quite popularly known in Hyderabad.

Question 2.
When is it considered to be the best time to visit Hyderabad?

Answer:
It is preferable to visit Hyderabad, mostly from May to July.

Question 3.
Which is food known to be widely famous in Hyderabad?

Answer:
It is best known for food cuisines such as Hyderabadi Biriyani, Haleem, Mutton Dalcha, Shikampuri Kebab, and so on.

Question 4.
What is the list of popular places that you can visit in Hyderabad?

Answer:
There are several places that you can go to in Hyderabad, including the Birla Mandir, Hussain Sagar, Jala Vihar, etc.