Essay on Hubli-Dharwad: Hubli, is a city in the Indian state of Karnataka, and is officially known as Hubballi. With its twin city Dharwad, in terms of the area it is the second-largest city of the state and the largest city of North Karnataka.

Hubli-Dharwad is also the city that houses the largest number of government offices outside Bangalore. Hubballi-Dharwad city was included for a smart city project – a flagship scheme for the overall development of infrastructure in the twin city- by the Government of India in 2017.

Hubli-Dharwad Hubli also is known as Hubbali is a city in the western Karnataka state, located in southwestern India. The cities are located in the upland region of the Western Ghats. The term ‘Hubli’ in Kanada means ‘Flowering Creeper’. Even though Dharwad and Hubli are two different cities, they are well-known as twin cities by many.

While Hubli is the commercial hub, Dharwad is the administrative headquarter. Hubli is the fourth largest city of Karnataka in terms of the economy after Bangalore, Mangalore and Mysore. There is a complete cluster of industries along with more than a lakh small and medium industry.

The Indian Government has set up the Aryabhata Tech Park in Navanagar region of Hubli and a Software Technology Park of India on the Pune- Bangalore Road. The city of Hubli is situated on the dividing line between the Deccan Plateau and Malnad.

Another significant boost for the development of industries in this region was the establishment of new-generation diesel locomotive shed in the city of Dharwad by the Railways of India. The British started their Railway workshops in the area in 1880 with which Hubli came to be reckoned as the industrial centre in this part of the country.

The twin cities of Hubli-Dharwad have a tropical wet and dry climate the summers are hot and dry, and they last from late February to early June. Next comes the monsoon season with moderate temperatures and a large amount of precipitation. The temperatures of the place are relatively moderate from late October to early February. The city of Hubli is located at an altitude of 640 m above sea level.

Hubballi or Pubballi (Old Village) was built around is developed around the 11th century stone temple of Aharanishankar. The twin cities have notable buildings such as the Bhavani Shankar Temple, Mahadi Mosque and the city hall. The famous MoorusaviraMatha of Hubli is claimed to have been established during the Basaveshwara’s period by a Sharana.

Hubli is a trading centre with ginning and pressing factories, cotton mills, and also a large newspaper industry. It is a divisional headquarters of the Southern railways of India it is a major road junction, and it also has railway workshops. The city also has several renowned educational institutions with several medical, law, commerce and engineering and technology colleges that are affiliated with the Karnataka University in Dharwad.

Dharwad was initially being known as Daravada (‘Gateway Town’) and had been fortified in the 16th Century. It is not only an educational but also a trading centre lying around the Southern Railway and a national highway. The city of Dharwad also has a mental hospital and detention home for juveniles.

In the year 1961, Dharwad has incorporated administratively with the industrial city of Hubballi 21 km southeast, forming of the state’s most famous urban areas. The HubballiDharwad Municipal Corporation (HDMC) has been selected as one of the 100 smart cities to be participating in the ‘Smart City’ Challenge. The city of Hubli can be accessed by air via the Hubli Airport. Hubli-Dharwad, the twin cities, is well connected to the rest of the country by the excellent railway network. 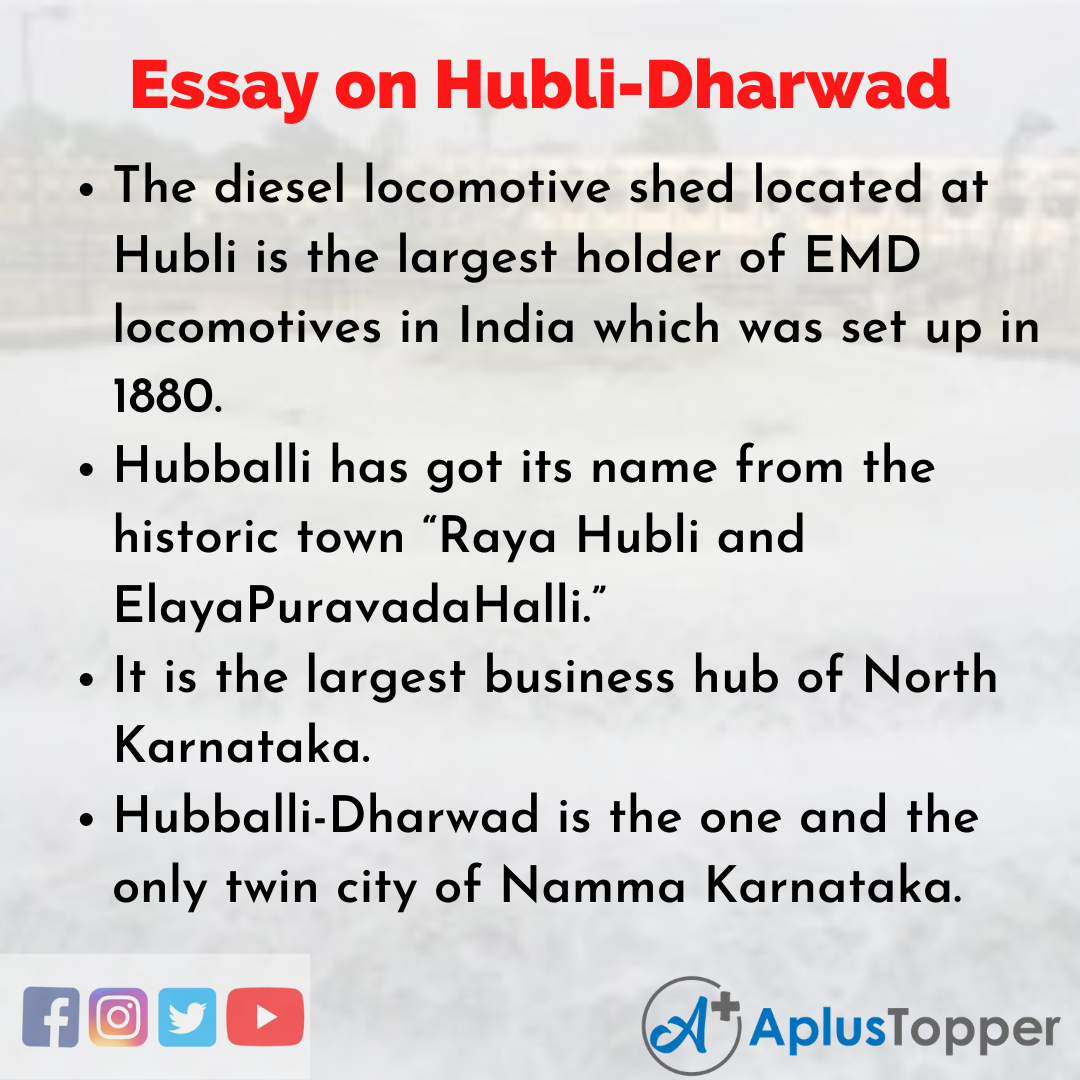 Both the cities Hubli and Dharwad are located in the southern state of Karnataka in India. The city Hubli is the second biggest urban destination of Karnataka right after Bangalore.

Hubli is well-known for its beautiful handloom textiles and for being a trading hub for iron and cotton. The city also has a rich historical influence since it has been a centre of both literature and arts since the 12th Century. The city’s ancient temples have several famous Sufi Dargahs with an exquisite artistic touch. People of Hubballi-Dharwad have strong lean towards Indian food ranging from Chapati, Roti, MadkiKaluPalya, Gurellu Chutney, Shenga Chutney, Agasi Chutney and many more delicious dishes from this place.

Hubballi also has some prestigious educational institutions such as KLE Society, Karnataka Medical College (KMC), University of Agricultural Sciences, BVB College of Engineering and Technology, Indian Institute of Technology Dharwad which are amongst few best in India. Hubli-Dharwad is the land of Kanada Literature where students from all across the country come to pursue their dreams.

10 Lines on Hubli-Dharwad in English

1. The diesel locomotive shed located at Hubli is the largest holder of EMD locomotives in India which was set up in 1880.
2. Hubballi has got its name from the historic town “Raya Hubli and ElayaPuravadaHalli.”
3. It is the largest business hub of North Karnataka.
4. The cities Hubli-Dharwad have a single municipal corporation known as the Hubli-Dharwad Municipal Corporation (HCMC).
5. Hubballi-Dharwad is the one and the only twin city of Namma Karnataka.
6. The population of the twin cities according to the census done in 2011 is 943,857.
7. DharwadPeda coming from Thakur Singh Peda is popularly famous all across the world.
8. Famous personalities like Bhimsen Joshi, DA RA Bendre Are from Dharwad.
9. Co-Founder of INFOSYS Sudha Murthy, who is a prominent personality of the IT industry, is from Dharwad.
10. Hubballi is well-known for Hindustani music. 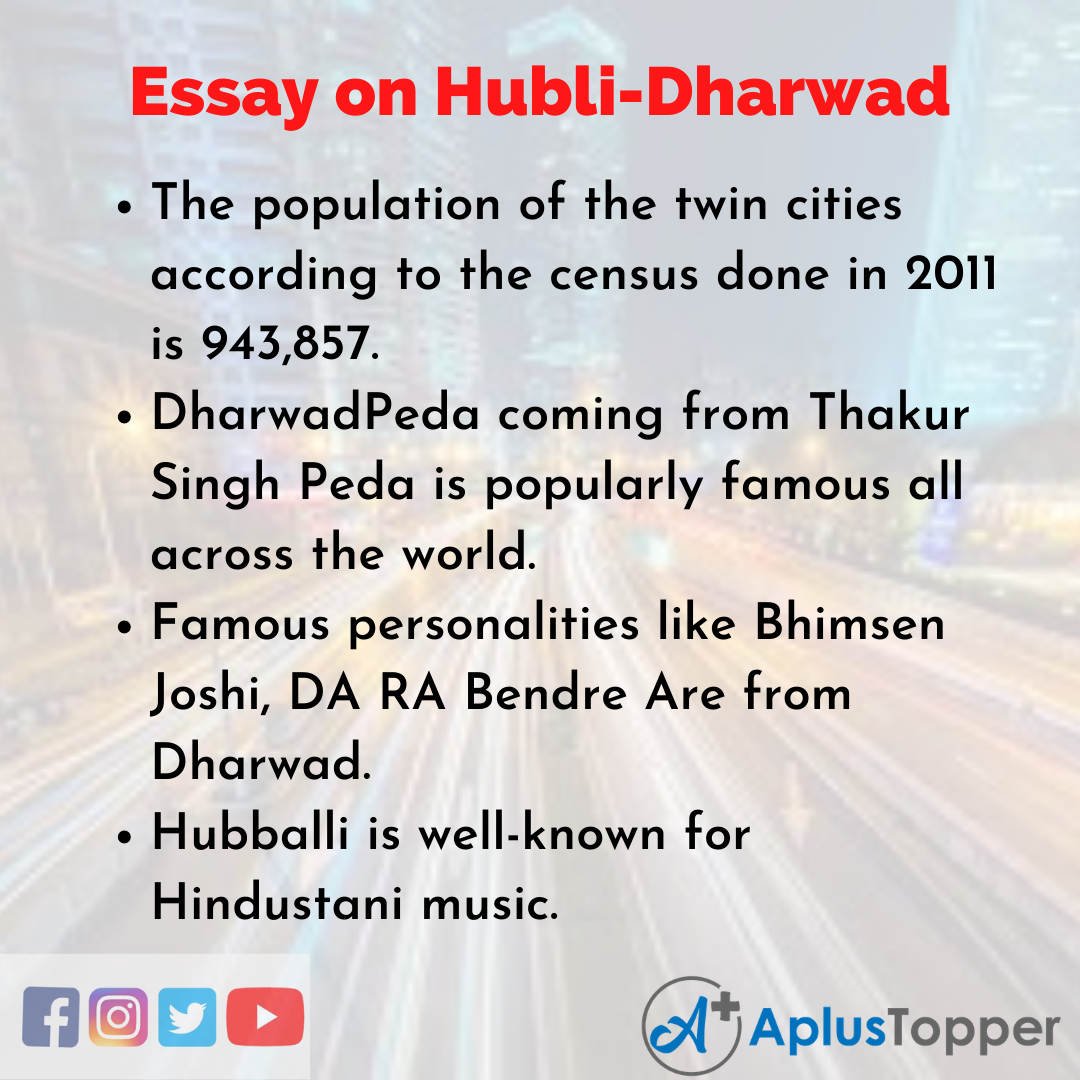 Answer:
Life in this city is peaceful, and the cost of living is comparatively low than any other metropolitan city.

Question 2.
Where does the term Hubballi come from?

Answer:
The name of the city Hubballi comes from the term HoovinaBalli which means ‘Flowering Creeper’ in the language Kanada.

Question 3.
Why is Hubli known as ‘Chotta Mumbai’?

Answer:
The city of Hubli is known as ‘Chotta Mumbai’ because it is a significant commercial hub.

Question 4.
What is Bengeri Village famous for?

Answer:
Bengeri village is a place in Dharwad which is an authorized place in the country to manufacture the Indian National Flag by the Karnataka Khadi Gramodyoga Samyukta Sangha (KKGSS).