Essay on Helen Keller: “The public must learn that the blind man is neither genius nor a freak nor an idiot. He has a mind that can be educated it is the duty of the public to help him make the best of himself.” These words by Helen Keller echo the fact that disability need not be the end of the world. But one can overcome all hurdles through one’s spirit. – The Indomitable Spirit

Below we have given a long essay on Helen Keller of 500 words is helpful for classes 7, 8, 9 and 10 and Competitive Exam Aspirants. This long essay on the topic is suitable for students of class 7 to class 10, and also for competitive exam aspirants.

Born on 27th June 1880 in Tuscumbia, USA, daughter of captain Arthur Henley Keller and Kate Adams Keller, she was born with full sight and hearing. The family lived in a house, Ivy Green, that was built decades ago by her grandfather. She had two younger siblings and two older half brothers.

They were leading a quiet life. But this was soon going to be short lived. In February 1882, when Helen was nineteen months old, she fell ill. To this day, the nature of her ailment remains a mystery. The doctors of that time called it ‘brain fever’, while today’s doctors think it may have been scarlet fever or meningitis. Whatever the illness, Helen was expected to die. When eventually, the fever subsided, Helen’s family was believed that their daughter was well again.

However, Helen’s mother soon noticed that her daughter failed to respond when the dinner bell rang or when she passed her hand in front of her daughter’s eyes. Helen became a very difficult child, smashing dishes, lamps and terrorising the household with her screaming and temper tantrums. Relatives regarded her as a monster and said that she should be put into an institution. By the time Helen was six, her family had become desperate.

Looking after Helen was proving too much for them. So her mother travelled to a specialist doctor for advice. They were given confirmation that Helen could never see or hear again. But the doctor believed that Helen could be taught and he advised them to visit a local expert on the problems of dumb children. This expert was Alexander Graham Bell, the inventor of telephone.

Bell suggested that the Kellers write to Michael Anagnos, Director of the Perkins Institution and Massachustts Asylum for the Blind and request him for another teacher. He considered Helen’s case and immediately recommended a former pupil of the institution, Anne Sullivan. On 3rd March, 1887, Anne met Helen Keller for the first time. Anne immediately started teaching Helen to finger spell. Spelling out the word ‘Doll’ to signify a present she had brought with her for Helen.

The next word she taught Helen was ‘Cake.’ Although Helen could repeat these finger movements, she could not quite understand what they meant. What frustrated her was that every object had a unique word for it. When Anne was teaching her the word ‘mug’, Keller broke the doll in rage.

Anne and Helen then moved into a small cottage on the mainland house to try and get Helen to improve her behaviour of particular concern were Helen’s table manners. She had taken to eating with her hands and from the plates of everyone on the table. Over the coming weeks, however, Helen’s behaviour did begin to improve as a bond grew between the two. Then after a month of Anne’s teaching, what the people of the time called, a ‘miracle’ occurred. Helen had until now not yet fully understood the meaning of words.

When Anne led her to the water pump on 5th April, 1887, a drastic change occured. As the cool stream gushed into Helen’s one hand, Anne slowly spelled the word ‘water’ on ‘Helen’s hand’. Helen suddenly, felt that the mystery of the language was revealed to her. Within the next few hours, Helen learnt the spelling of thirty new words.

Helen’s progress from then on was astonishing. Her ability to learn was far in advance of anything that anybody had seen before in someone without sight or hearing. Soon, she could write with both ordinary and braille typewriters. Helen had now become a phenomenon to reckon with. Her next achievement which brought her laurels from all over the world was when she moved to the Cambridge school for young ladies in 1896 and in the Autumn of 1900 entered the Radcliffe college, becoming the first deaf and blind person to have ever enrolled at an institution of higher learning. In 1904, Helen graduated from the college, becoming the first deaf-blind person to have a Bachelor’s degree.

She maintained contacts with Austrian philosopher Wilhelm Jerusalem, who was one of the first people to discover her literary skills. With her, determination, she learnt to speak and gave lectures and speeches. She ‘heard’ others speeches by feeling their lips with her hands. She became adept at Braille and sign language. She could also feel music by placing her hands on top of a resonant table. 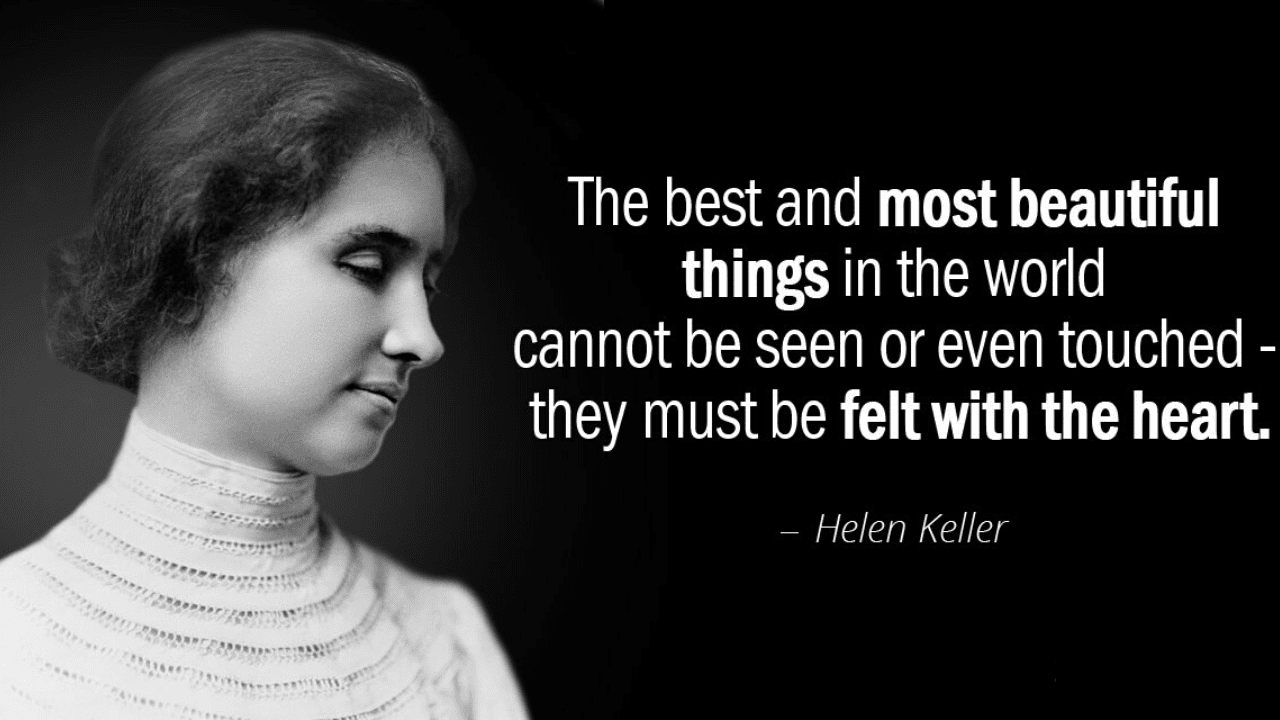 Below we have given a short essay on Helen Keller is for Classes 1, 2, 3, 4, 5 and 6. This short essay on the topic is suitable for students of class 6 and below.

She was an advocate for people with disabilities. In 1915, she and George Kessler founded Helen Keller International (HKI) organisation. This organisation undertakes research in vision, health and nutrition. She also helped in the foundation of American Civil Liberties Union (ACLU) in 1940. She was a member of the Socialist Party and supported the working class.

She published 12 books and several articles. One of her earliest writings was ‘The Frost King’, which she wrote when she was only 11 years old.

During her college time, Helen also started working on her first book ‘The Story of My Life,’ which later became a classic. After this success, Helen and Anne went on lecture tours throughout the world speaking on their experiences. In 1908, she wrote ‘The World I live in’. Her essay series on Socialism, ‘Out of the Dark’ was published in 1913. Her spiritual autobiography, ‘My Religion’ was published in 1927, and revised edition, right in My Darkness came out in 1994. In October 1961, Helen suffered the first of a series of strokes, and her public life was drawn to a close. On 1 st June 1968, at Arcon ridge, Helen Keller died peacefully in her sleep.

Today, Helen’s final resting place is a popular tourist attraction. Her life has inspired many. In 1962, the play ‘The Miracle Worker’ was made into a film and was a phenomenal success. More recently in India, the film ‘Black’ was made on her life.

Her achievements and admiration prompt us to ask the question what else could somebody desire from life? It’s so true that some of the best things in the world can’t be seen or touched, they can only be felt with the heart.