Essay on Grandparents: Grandparents are always a matter of concern and a source of happiness in every household. They are often a matter of concern because they have weak health. They are a source of joy to the children of the household because of their protective nature. Often it has been seen that grandparents tend to be more protective and caring than parents. This often leads to a grandparent being a child’s best friend within the household.

The family structure these days is often without grandparents. This is because children after they grow up and start earning, are keener to live separately. Therefore when they begin family, grandparents are absent in the household. Here we have provided Grandparents essay covering the topic which might be useful for students in their exams given the commonality and the importance of the subject matter.

Over here, we have written as samples one long essay of 500 words, one short essay of 100-150 words, and ten crucial points that comprehensively cover the subject matter.

Essay on Grandparents is usually given to students of classes 7, 8, 9, and 10.

In pre-industrial and post-industrial setups, the family seemed to be the only functioning social unit. This means that life, for every individual, started and ended within the family. The concept of joint families gradually evolved with the rise of modernity. People in joined families lived together. In the case of joint families, grandparents had a more prominent presence. Such grandparents would usually be the head of the household because of their age.

They also had an important role to play in strengthening family ties and resolving family issues. Children would look at them as their household friends. From reading out stories to saving the child from his parents, grandparents were an integral part of any family with a large number of children. Apart from being caring and protective, grandparents would also be very inspiring to the children. They would often act as role models and provide children without enormous support. In some cases, grandparents would be a child’s only hope.

With the advancement of age, family structures broke down into several small units. Joint families became nuclear families. Most of these nuclear families would consist of a single child and two of his parents. The absence of a household friend often has a psychological impact on the child. Without grandparents, the child tends to be alone and unattended most of the time. This is because these days, both the parents of a child seem to be working. The whole concept of nuclear families has eroded the idea of grandparents to a considerable extent. Parents do not allow children to engage with their grandparents in any way.

In the case of vacations, they opt out of letting the child visit his or her grandparents. Instead, they send them vocational training. Competition and globalization have played an enormous role in influencing the attitude of the parents. Most of them want to make their child the best among everyone.

Since this attitude is shared by many, there is always a sense of strong and stiff competition. The thought of such competition takes away a child’s hobby and his or her past time. This makes it even more difficult for a child to know his or her grandparents. On the other hand, globalization has ushered in the idea of separate and independent living rather than living together.

Most parents often resort to living separately because they feel that their parents are a burden after a certain age. Often, cases are heard when the elderly are seen dead in their households without anyone getting to know about it. This is the worst possible situation for any person. Being a grandparent has thus changed its definition these days. It is more about a formal relationship rather than a close one.

This leads to two things. One, grandparents become more lonely and suffer from that while children are unaccompanied too since they are deprived of a particular form of care and attention. Over the years, grandparents who were the lifeline and the backbone of individual families have come down to being a single entity. All this is because of a change in the ways at which people look at their lives have changed. 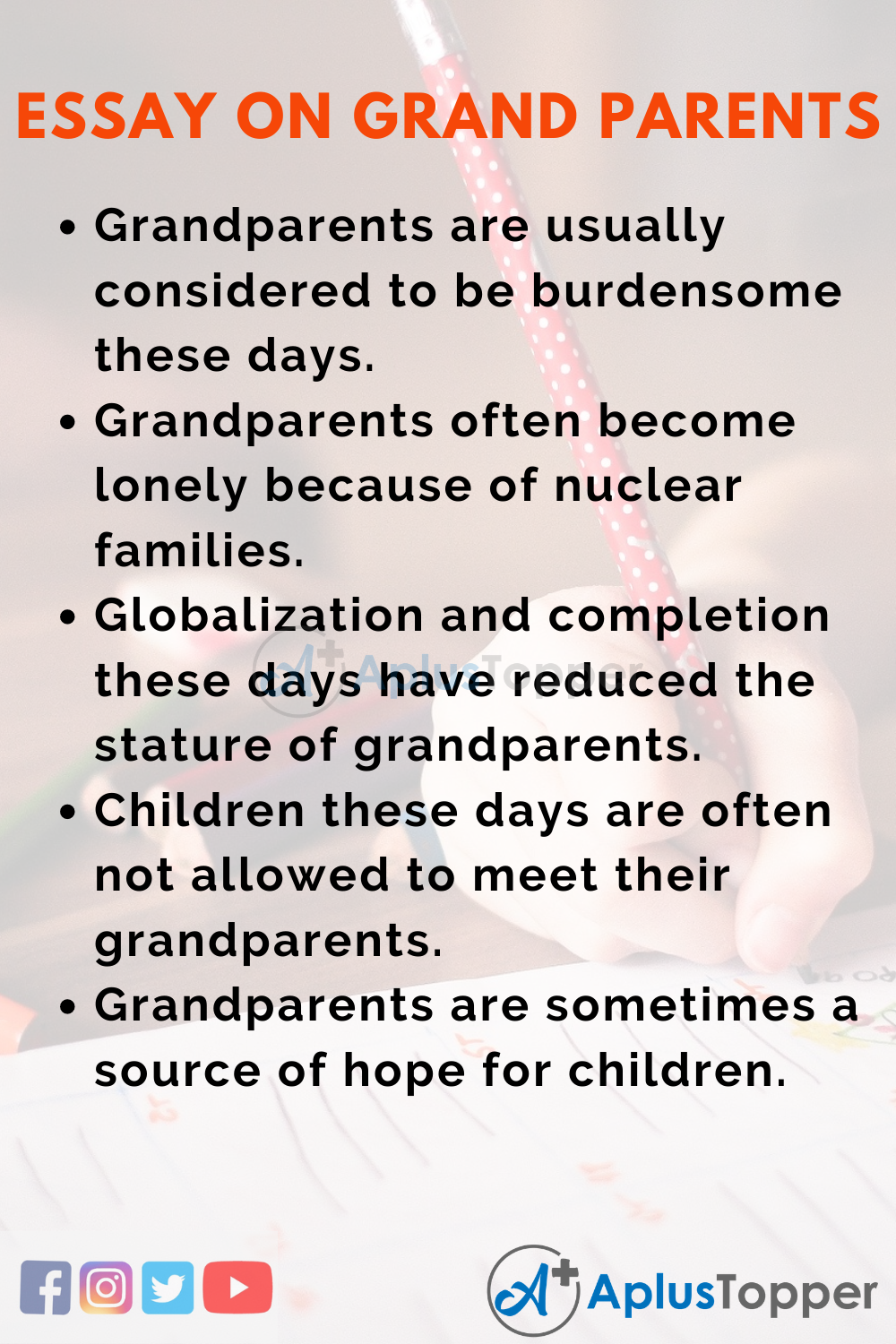 Grandparents somewhat define the word ‘more.’ They are more than parents, more than friends, and more than caregivers. Grandparents are often the head of their families. The love and attraction between a child and his grandparent are of a different kind. In many cases, grandparents are saviors and guardians of their grandchildren. Nowadays, however, the conceptual understandings have changed. Since people are more engrossed in a competitive lifestyle, the whole idea about a family has gone under transformation. Usually, one might not find grandparents in a single nuclear family. This is because they are often considered to be burdensome. However, there are cases of nuclear families having grandparents. Over there, the child usually enjoys enormous love and support.

10 Lines on Grandparents Essay in English 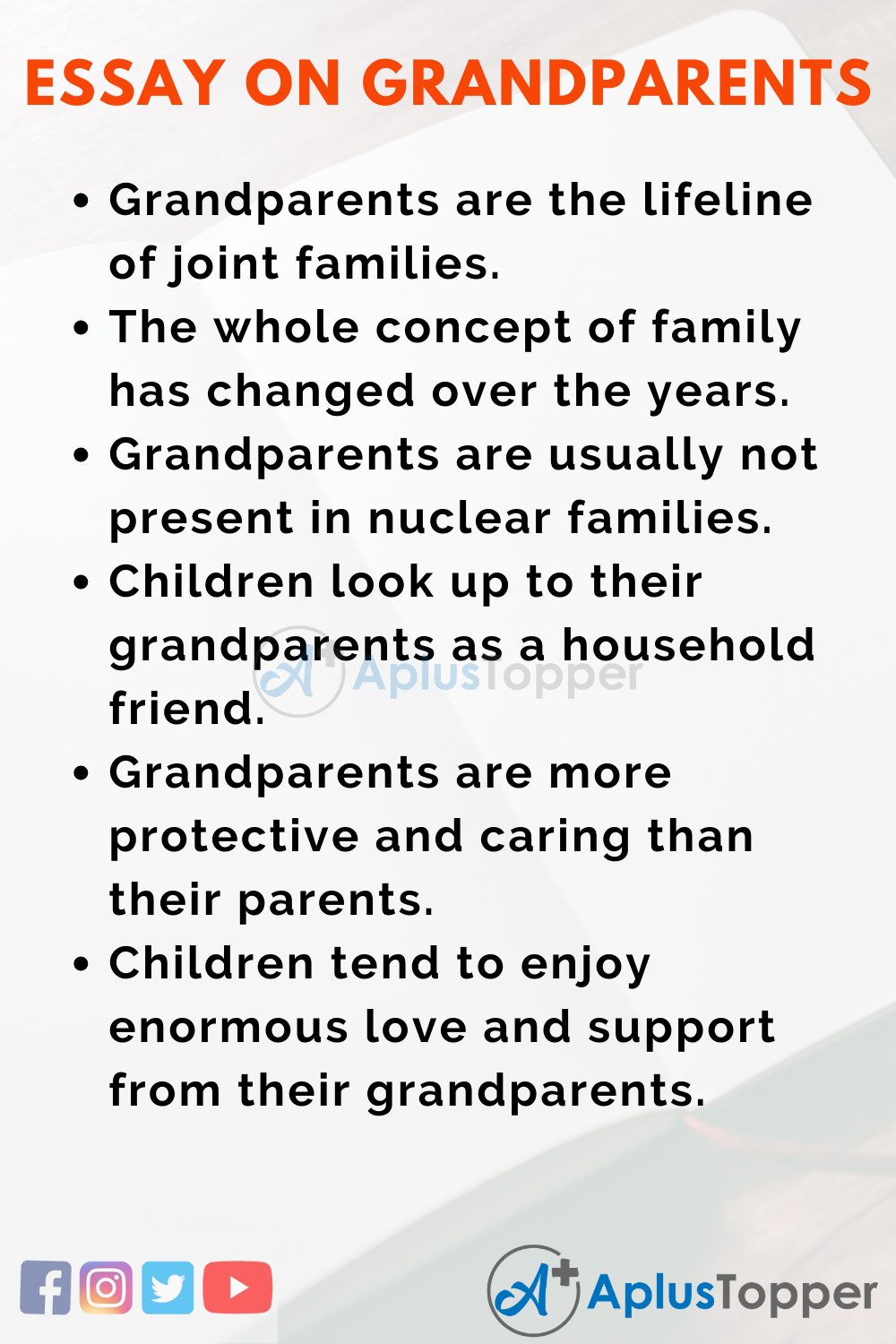 Question 1.
Why has the stature of grandparents changed?

Answer:
It has changed because of a change in the lifestyle of individuals who want to be independent in terms of everything.

Question 2.
Why is a grandparent imperative to a household?

Answer:
A grandparent is essential because he or she usually strengthens family ties and acts as a guardian to everyone in the family.

Question 3.
Why do grandparents end up being lonely?

Answer:
Grandparents end up being lonely because nobody takes care of them after a certain age, and they are all on their own.