Essay on Google: Google is the most popular company founded by Larry Page and Sergey Brin in 1998. The term ‘Google’ comes from a mathematical word ‘googol,’ which means one with a hundred zeros. Google is the largest global market for search engines.

Google is an internet savvy market that has created a global impact. Its principal activities are to provide online advertising and search engine. Google also manages hardware and software products and operating systems. It has extended its business of delivering as well as selling products and services in over 50 countries.

Google has overturned the lives of people with its system of world information accessible and useful.

We have mentioned two essays- a 500 words Long Essay and a 200 words Short Essay. The extended essay on Google consists of 400-500 words. The Long essay is a guideline that helps students with assignments and exams. The short essay on Google is written for 200 words and is suitable for children and kids with their classwork.

The below- mentioned long essay is for pupils aspiring for competitive exam and those belonging to classes 6,7,8,9, and 10, respectively. The essay guides the students with their class assignments, comprehension tasks, and even for competitive examinations.

Google is the leading Internet search engine optimization and provides its primary services with targeted search outcomes. It holds consequences from over eight billion web pages. Google was developed by two Stanford dropouts Larry Page and Sergey Brin, from a college project. The current CEO of Google is the proud Indian- Sundar Pichai.

Google made a life-changing announcement in August 2015, where it declared to restructure its leading subsidiary conglomerate- Alphabet Inc. This subsidiary was the umbrella company that managed all of the Alphabet’s Internet interests. While Larry Page upheld his position as the CEO of Alphabet, Sundar Pichai was nominated as the CEO of Google.

Fortune Magazine ranked Google as the first in the annual ‘Best Companies’ succeeding in other big companies in 2007 and 2008. Google is noted as the ultimatum of all the other global companies and is quoted to have a ‘high-energy working setting and fast-paced.’

Google is a tech company which comprises mainly of online advertising and search engine optimization. It also holds many deals, such as software and hardware products, along with operating systems. Google’s primary source of revenue comes through its online advertising field.

Through its home segment business, Google provides video entertainment access and services. To provide access to Digital Television Services, the consumers ought to subscribe to Google services. Google provides collaborations with multiple technological companies that offer an infinite number of services and products, and the mobile segment sells and manufactures electronics.

Yahoo and Microsoft equally provide strong search technology and share a competitive market with Google. Google operates in a cartel sector with just a few rivals like MSN, Yahoo, Bing, Microsoft, etc. Because of which Google finds it hard to differentiate the consequences within the search engine.

Besides, MSN and Yahoo have targeted marketing systems to launch their search engine optimizations. Thus, Google is in a race to create a fresh information load that attracts and grows on its customers through diverse marketing networks.

Google’s potential concerns are the ‘Click Fraud,’ which is the most significant influence on their profit investment. In reality, Google confessed to paying many refunds due to ‘Click Fraud.’ ‘Click Fraud’ is an automated computer program. It occurs when an individual imitates a legitimate web browser user while clicking an advertisement. This generates an inappropriate option that leads to a pay-per-click ad.

Thus, Google has provided the world with the enhanced entertainment industry, with just a click. The term Google itself has changed the world’s way of functioning life. 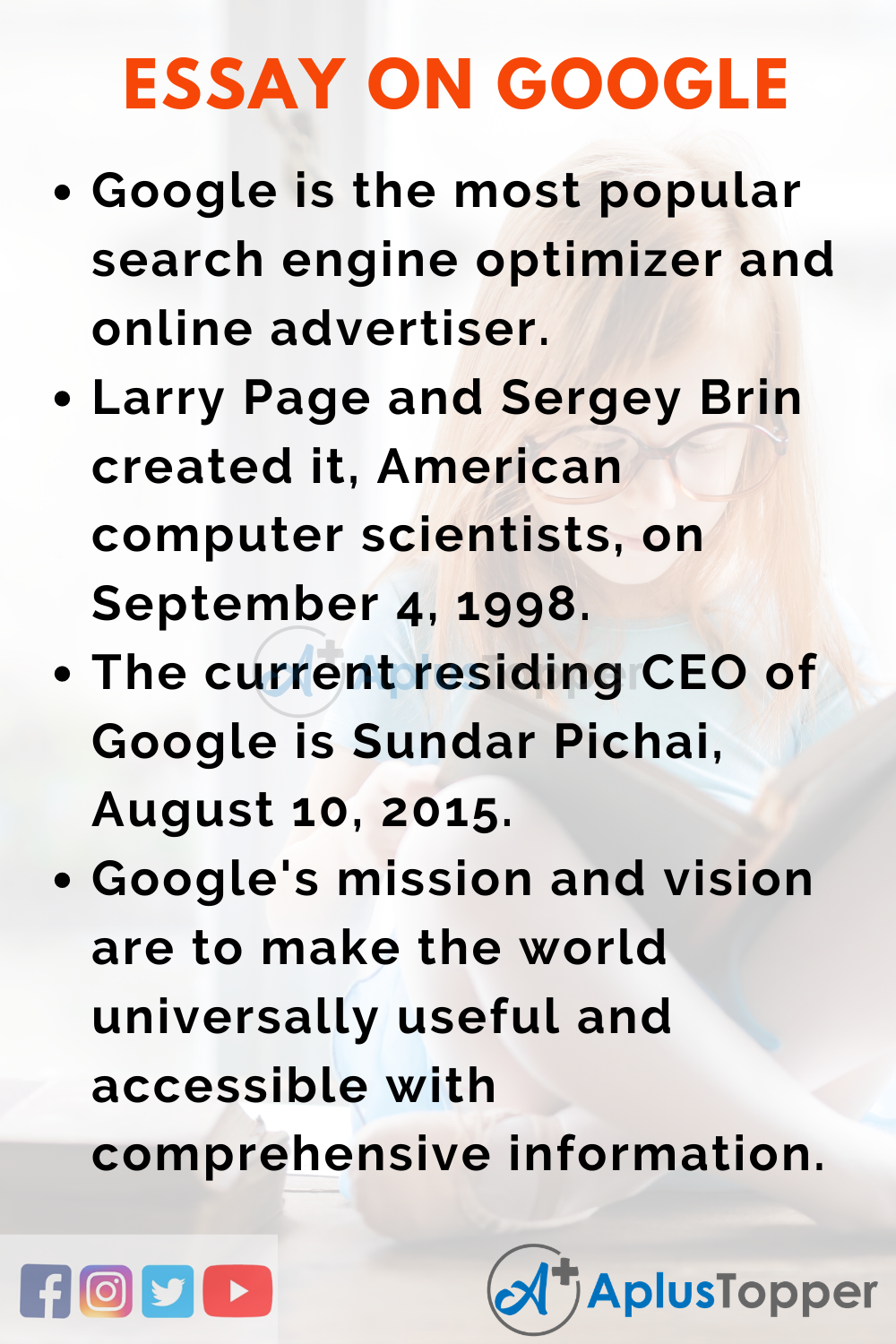 The 200 words short essay mentioned below is suitable for kids and children up to 6th standard. The essay is written to guide the children with their school works-assignments and comprehension exercises.

Google is a global search engine optimizer that overturned the world’s way of functioning. The word Google comes to the mathematical term’ Googol,’ which means the value that represents one followed by a hundred zeros. The current CEO of Google since 2015 is Sundar Pichai.

Google was created and developed by Larry Page and Sergey Brin. They were Standford dropouts, who founded Google as a part of their college project. The primary service of Google is to offer its users with targeted search results. Google is the largest online search engine optimizer with 380 million worldwide consumers and provides information in 149 different languages.

While Yahoo and Microsoft invest in search engine technology in the market circle, Google maintains through an oligopoly industry. With low and minimal differentiation of its vast users with the optimizer, Google finds it difficult to manage and retain them.

Thus, Google has transformed the world into a fast-paced scenario with access to comprehensive information from almost 8 billion webpages. 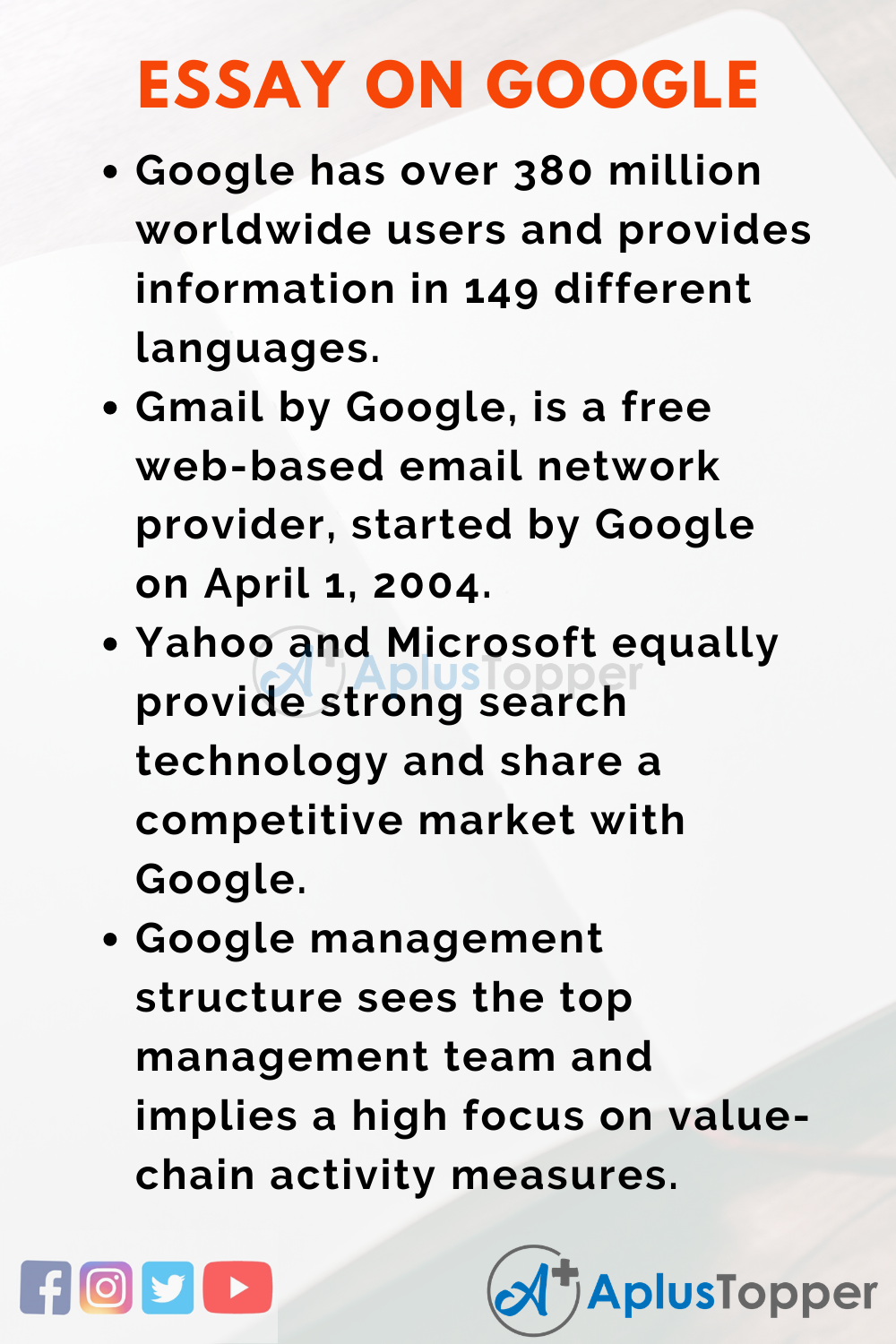 Question 1.
What does the word Google mean, and what is its function?

Answer:
The term Google comes from a mathematical derivation ‘Googol,’ which means one followed by a hundred zeros. Google is the largest and the most used search engine optimization that provides information in 149 languages from 8 billion webpages.

Question 2.
Who is the Chief Executive Officer (CEO) of Google company?

Question 3.
What were the founding fathers of Google company?

Answer:
The founding fathers of Google are Larry Page and Sergey Brin. They developed Google while doing their Ph. D at Stanford University as a part of their college project in 2005.

Question 4.
Who are Google’s rival competitors?