Essay on Girl Education: Education of the girl child has been a long-standing mission of the governments of many counties where the sex ratio is between girls and boys is grossly unequal. There are certain countries where the number of females is considerably low compared to the number of males. Such countries include parts of the African continent and other countries too. India for example has taken up the initiative of ‘Beti Bachao Beti Padhao’ meaning save the girl and educate her.

Education itself is very important irrespective of whether the child is a boy or a girl. But there are countries where girls are often neglected and are not thought of to deserve education. Here we have written two essays covering the topic for students that can benefit them during exams.

Here we have written one long Essay on Girl Education 500 words, one short essay of 150 words and ten important points regarding the topic. 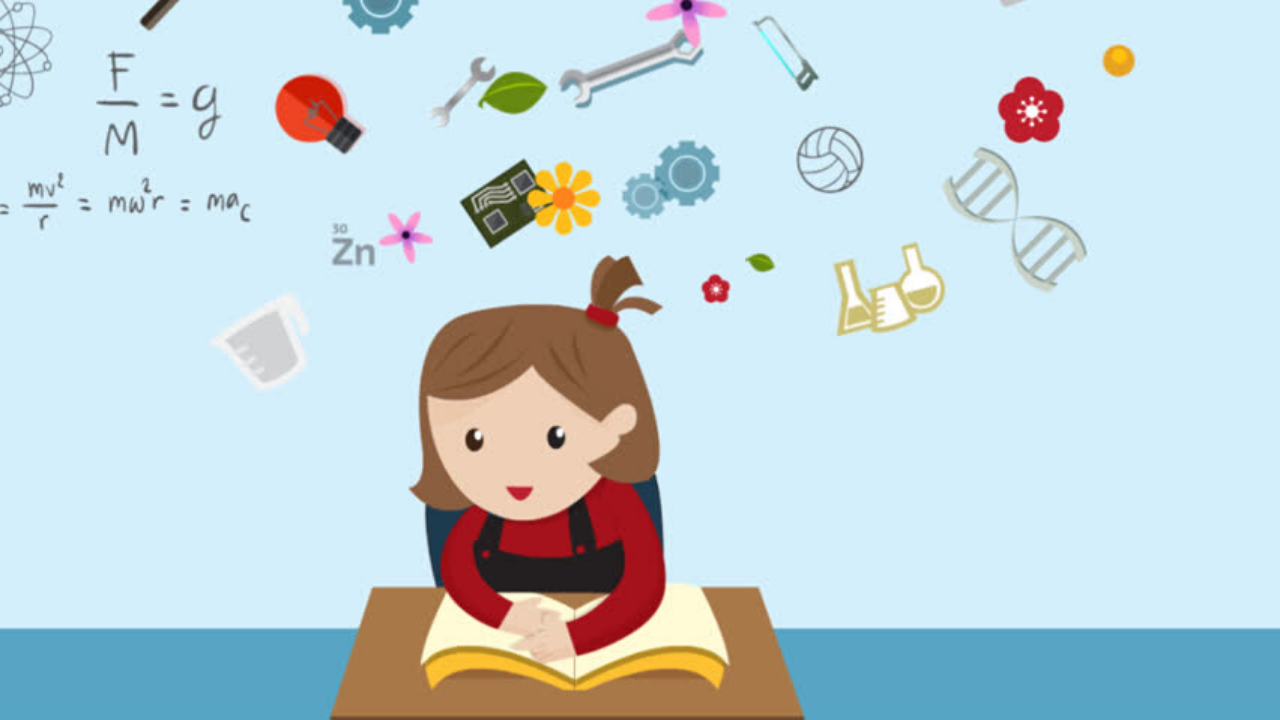 Across history it has been seen that women have been neglected on all fronts. Be it education or labor, the position of women has always been lower in comparison to that of men. This is because it was thought that women did not possess the capability to take in education and that education would not serve them any purpose. This whole argument however can be construed in light of men trying to have everything for their own and designating work that is to be done in the domestic sphere to women. In India it was not until Raja Rammouhan Roy that the importance of education for women could be established.

There is another thing over here that is to be understood. During earlier times, there was a distinct division between public life and private life. Women were not allowed in the public sphere because they were not meant to take part in it, while in the private sphere men did not play any significant role as such. The distinction of these two spheres resulted in the standard of education for women to be centered around subjects matters of the household.

While the distinction of social life took place there were women who did not pay heed to these concepts and tried to establish themselves all on their own. Such an attitude led to the development of women as a social category in general and education of girls and women in particular.

One thing that has to be noted over here is that although we are referring to the female population as women they were actually young and can be termed as girls. In those days, girls would be married off at a very early age, especially if her father was poor and did not have sufficient money to sustain the daughter of the family.

Girl education has developed over the years. In places where there were no signs of girl education, girls have begun to enroll themselves in schools and other educational institutions. In India under numerous schemes of the government, several benefits are given for the education of a girl child. Women’s education is essential in urban and rural areas.

For single girl children studying in schools and colleges several scholarships have been announced. These scholarships are given so as to provide girls with an incentive in learning. In many parts of India however girl education is still a myth. There are even regions were the birth of a girl child is unwelcomed.

Even though we have moved ahead so much in time, there are many among us whose mentality has not changed. Even a few years back cases of female infanticide were reported from the northern parts of the country. What is to be remembered in this case is that even before independence it was states like Rajasthan and Gujarat where female infanticide occurred on a massive scale. Even the abhorrent culture of sati and jauhar prevailed in these regions.

It seems, till this date there has been no change in the mindset of the whole of the population. On a more serious note, above everything, we should all learn to respect girls and women first. That is the key to every prospect of development surrounding them. Education of the girl child will follow subsequently. 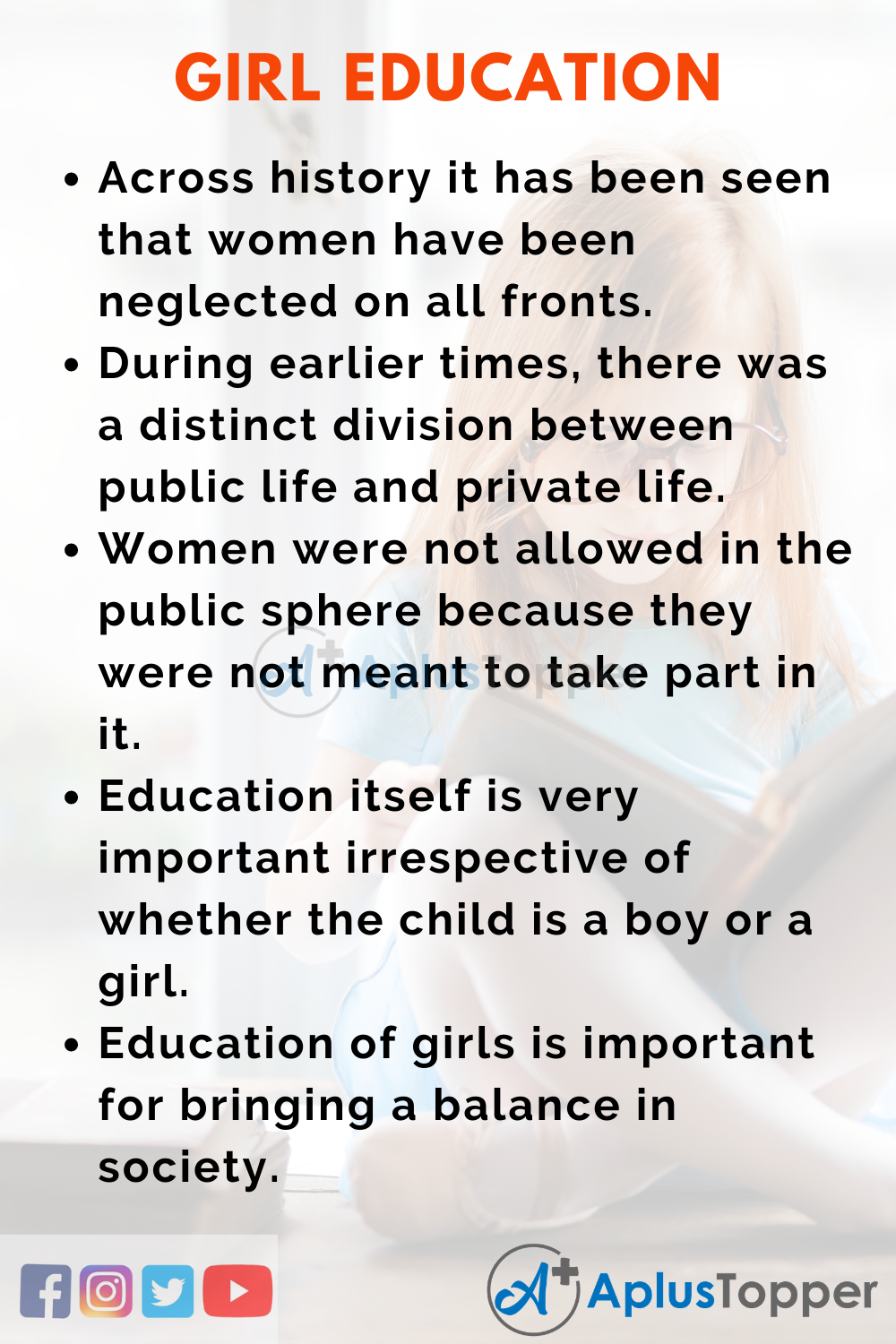 Education of girls is important for bringing a balance in society. Since historic times, girls have been the subject matter of neglect, torture and other horrific activities that cannot be ignored. There are many programs nowadays which have the objective of educating the girl child in a holistic manner. But let us first think why are we stressing on the importance of education for girls only? This is because is most cases girls have been denied the chance or opportunity of an education.

Even in case of families where people were educated girls were thought to be nothing but child bearers. With such a robust mindset, the education of girls has often been looked down upon and subsequently ignored. Although times have changed, there are people in India who still oppose the education of girls. Such people are often from the northwestern parts of the country where incidences of sati and Jauhar were performed. Education of girls is not just a matter of importance. It should be highlighted as India’s top priority.

10 lines on Essay on Girl Education in English 150 words 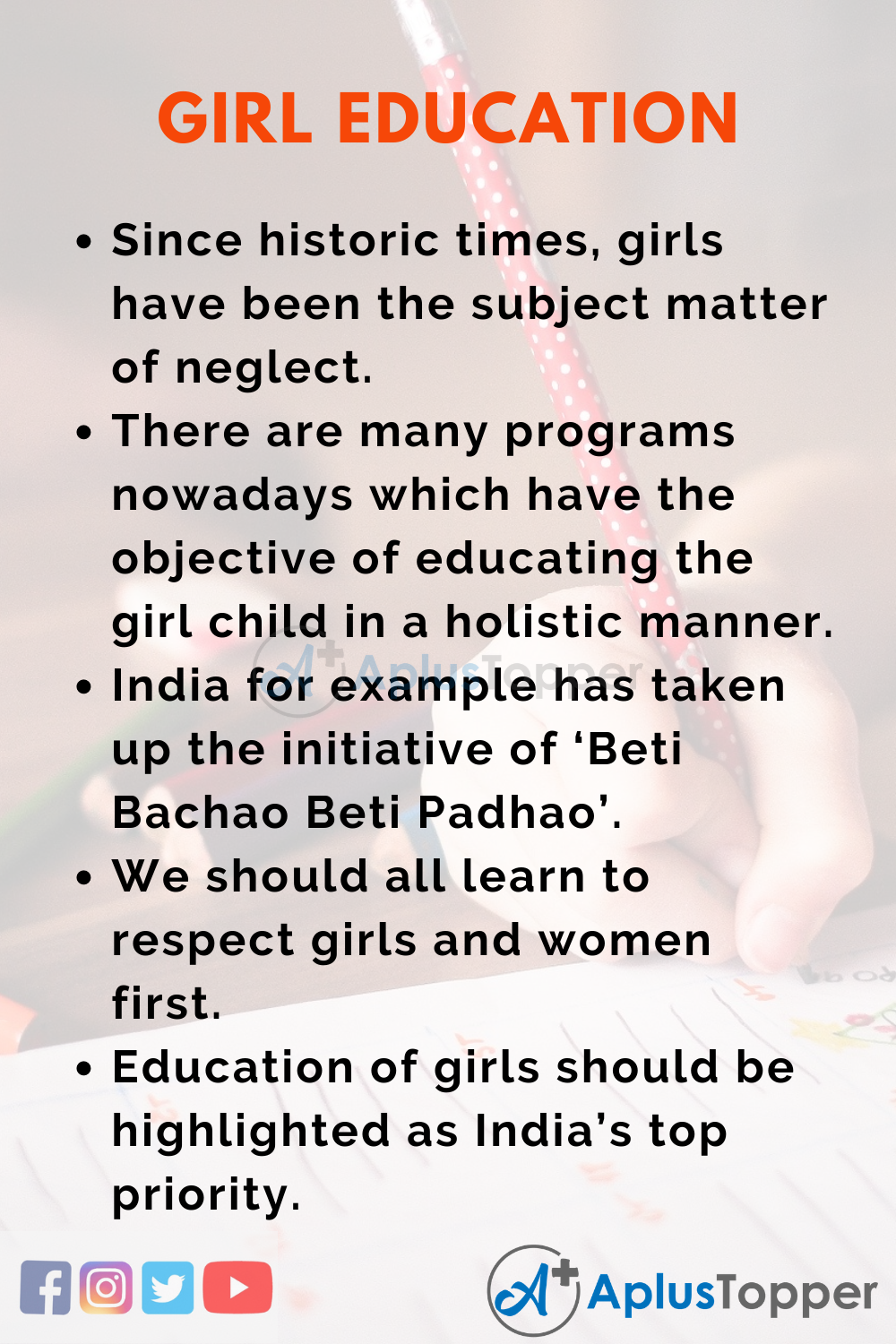 Question 1.
Why is education of girls specifically important?

Answer:
Education of girls is specifically important in those countries where girls have been ignored and neglected for a long period of time and were believed to be only child bearers.

Question 2.
How can the education of girls help them?

Answer:
When girls are provided with the good quality education they can make use of it to establish themselves.

Question 3.
What is the objective of an education mission of girls?

Answer:
The sole objective of an education mission of girls is to bridge the existing social inequalities between men and women.