Essay on Ghaziabad: This is a beautiful city that is present within Uttar Pradesh. It is often known as the “Gateway of UP” due to its proximity to New Delhi. Several transportation services link it with important states like Delhi and Noida.

Ghaziabad is a planned city that has a population of around 2,358,525 people. It has an excellent transportation infrastructure. This city is currently developing rapidly in several fields, including educational, infrastructure, and industrial. Besides, this city is also famous for offering several unique places, including movie theatres, shopping malls, restaurants, and much more.

We provide students with essay samples on a long essay of 500 words and a short essay of 150 words on the topic Ghaziabad for reference.

Ghaziabad is a city that is located on the western side of the state of Uttar Pradesh. It is situated on the Hindon River banks. This city is considered to be the gateway towards Uttar Pradesh. Ghaziabad was established in the year 1704 by the emperor Ghazi-ud-din.

In the old-time when Ghazi-ud-din decided to create the palace for himself, this city used to be known as the Ghaziuddin Nagar. Excluding the gates, small parts of the boundary wall, and the vast 14-feet pillar, this monument has turned into ruins.

To acquire Ghaziabad, there have been numerous wars between several rulers and warriors. Ghaziabad has also witnessed the downfall, along with the assassination of the Jat ruler Surajmal. Similar types of wars and conquests have greatly influenced the culture of this city.

Ghaziabad is known to have been a very crucial part of the fight for independence. This city was the main location for the 1857 mutiny. For mutineers and the British armies, the Hindon river banks turned into a battleground. In the Meerut district, Ghaziabad was known as a Tehsil. However, it became a separate district in the year 1976. The development of this city has been continuous and rapid over the years.

Ghaziabad is considered as the administrative head office of the district of Ghaziabad. Earlier, this city was included in the district of Meerut. Besides, this city being the gateway of Uttar Pradesh is due to its developed transportation services and systems.

The economy of this city has increased due to the rapid growth in industrialization and tourist attraction. Ghaziabad has gradually transformed into a dynamic and powerful industrial town in the country over the years. This city is also known for possessing several charming monuments and places.

The elegance of this city has played a crucial role in increasing the number of tourists over the past few years. Numerous rivers pass through this city, including Hindon, Yamuna, and Ganga. It has also enhanced the beauty of the city. There are many sports as well that one can take up in this city.

Many water sports have emerged due to the presence of these fast-flowing rivers. Travelling through each popular place in Ghaziabad can be done through local transport. There are a few locations that allure a large number of visitors like Dasna and Bahadurgarh.

Ghaziabad is also a great place for shopping. Ghanta Ghar is one of the most popular locations for street shopping in Ghaziabad. There are many latest and fashionable things that one can get at an affordable budget range.

This city is linked with many other top cities such as Noida and Delhi through air, road, and rail. The visitors can come to Ghaziabad through taxi or buses from Delhi. Ghaziabad is also linked with the Delhi metro.

Several routes link the various areas in this city. Some of the top ones include Vaishali, Mohan Nagar, Arthala, Hindon, and so on. 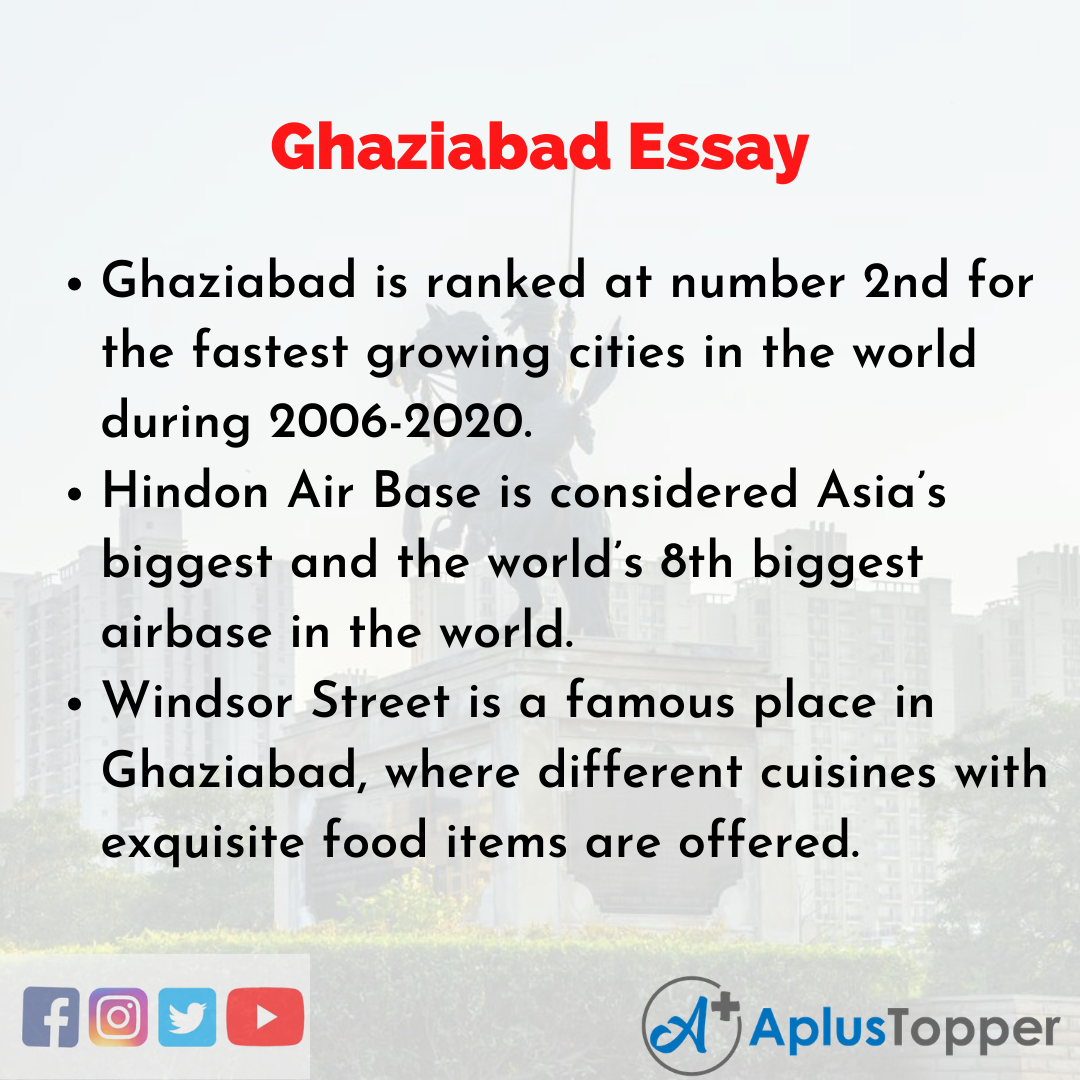 Ghaziabad is quite famous across India due to several monuments, parks, gardens, and museums. Ghaziabad is considered to be a highly populated place with a busy road.

The numbers of multiplexes, flyovers, and roads are increasing here each day. It is widely known as an industrial centre. Some of the important industries of this place include EMU trains, bicycles, locomotive, pottery, varnish, metal chains, paints, tapestry, etc.

Some restaurants also serve Chinese cuisine, which is widely popular across the state. It also has restaurants that provide some of the most delicious and mouth-watering Gujarati food like Dhokla and Phaphda.

10 Lines on Ghaziabad Essay in English

1. Ghaziabad is ranked at number 2nd for the fastest growing cities in the world during 2006-2020.
2. This city is well-known to have one of the most stunning malls in India.
3. Hindon Air Base is considered Asia’s biggest and the world’s 8th biggest airbase in the world.
4. Windsor Street is a famous place in Ghaziabad, where different cuisines with exquisite food items are offered.
5. Old Monk, iconic dark rum, is mainly produced in this city. This rum is famous all over the world.
6. ISKCON Temple, situated at Hare Krishna Road, is the centre of attraction during the Krishna Janmashtami festival.
7. Dadri is famous for having the largest power project in the world, which is managed by NTPC.
8. City Forest is a famous spot for people who love to interact with nature. It offers boating, cycling, horse riding, etc.
9. This city is popular for its variety of sweets, including Kaju Katri, Gulab Jamun, Besan laddu, etc.
10. Ghaziabad also offers a variety of cuisines, including the Mexican dish known as Burrito. 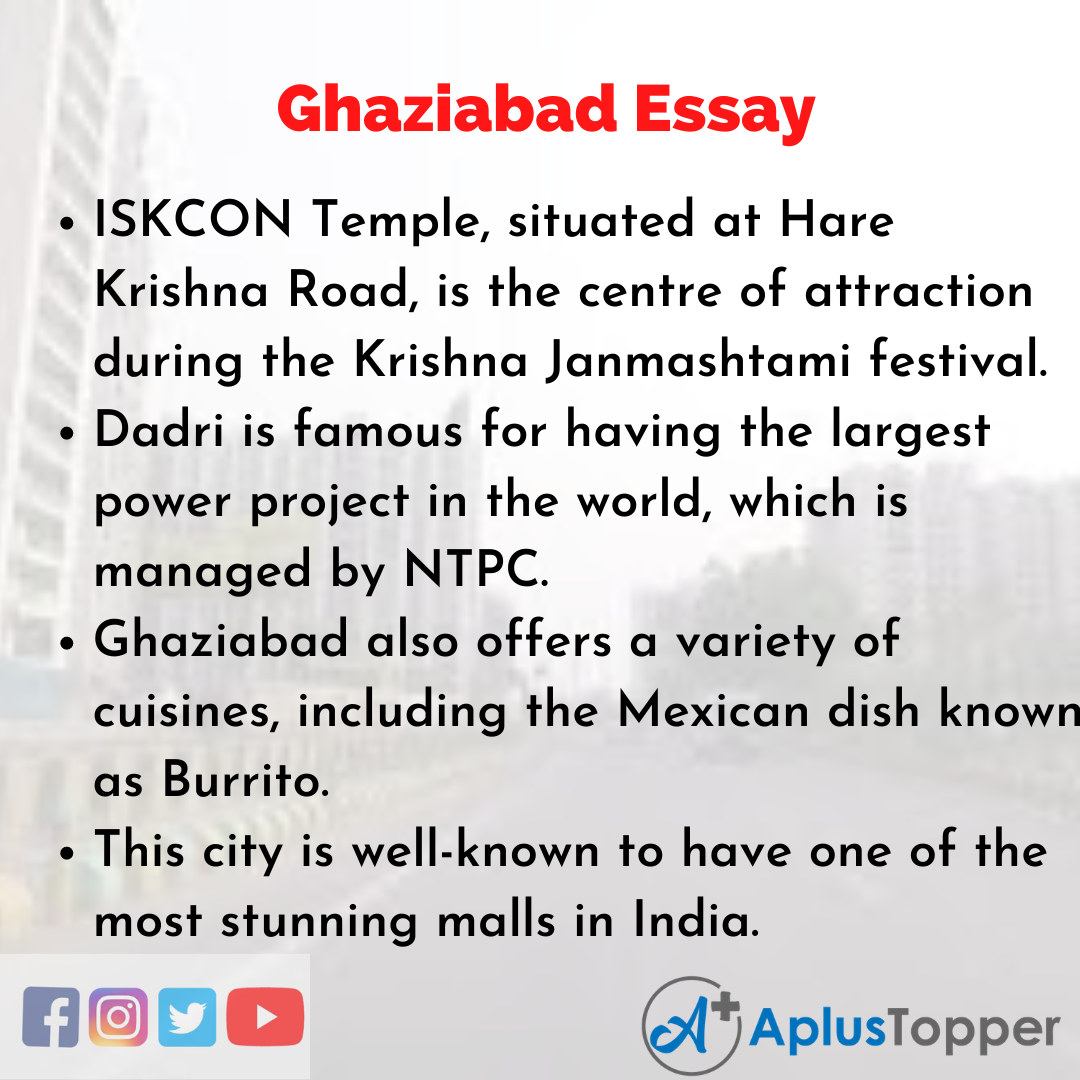 Question 1.
Why is Ghaziabad famous across the country?

Answer:
Ghaziabad is mainly known for being the biggest educational, industrial, and commercial hub.

Question 2.
Which months are pleasant for travelling to Ghaziabad?

Answer:
October to Early March is the most pleasant time due to the perfect weather.

Question 3.
What are the popular dishes in Ghaziabad?

Question 4.
What are the locations famous in Ghaziabad?

Answer:
The famous locations in this city are Shipra Mall, City Forest, etc.