Essay on Generation Gap: People belonging to different age groups, who have different ideologies often self create generation gaps. They do so because of the difference in their opinions, likings, thoughts, and interests. Physical and mental strength also changes with the due course of time and is also responsible for the creation of a generation gap.

The generation gap has caused distance between the children and their parents and grandparents, and it has become tougher to maintain peace and harmony. People have forgotten how to communicate with the other generations, and they have isolated themselves. This generation gap is not at all healthy, and we have compiled a few long and short essays and ten lines on the topic of Generation Gap for the readers to use.

The theory of generation gap was launched around the 1960s, where the younger generation was always found questioning and challenging beliefs, ideas, and viewpoints. Based on the point of view, ideas, behaviour change, and beliefs, generations can be segregated into the following categories, namely: the Baby Boomers who were born between 1946 and 1965. This generation consists of hard-working people who are generally not open to feedback. They try to seek financial security and have an urge to feel appreciated.

The Traditionalists are the people born before the baby boomer generation. They are known to take orders and follow them out efficiently. They like to be around folks who appreciate their experience, knowledge, and loyalty. The Generation Y Group consists of young people born between 1981 to 1999. They try to indulge themselves in work and crave for quick feedbacks. People belonging to this generation are quite creative, and they like to explore their creativity. The Generation X Group have people born between 1965 to 1980 who want their own space. They do not generally like rules, and they want to do things in their ways. They try to give preference to their families first as they had lacked this feeling.

Due to the generation gap, beautiful relationships like the one between a parent and their child is getting hampered. People must respect each other’s individuality rather than imposing their ideas and try to understand each other to clear out all the problems. Everyone must be given their desired space, and when one is explaining themself, the other must patiently listen to them and then give them their opinion and not impose it on them.

If someone does not understand what the other person is saying, the other person should explain it with calm and not avoid the whole topic because this leads to estranged relationships which are not beneficial by any means and can cause conflicts. People must be open to new ideas and not be rigid about their opinions and beliefs. Any issue that comes up must be discussed and not taken into consideration that the others would not understand it. In this way, the generation gaps can be minimized, and people from all the generations can live in serenity. 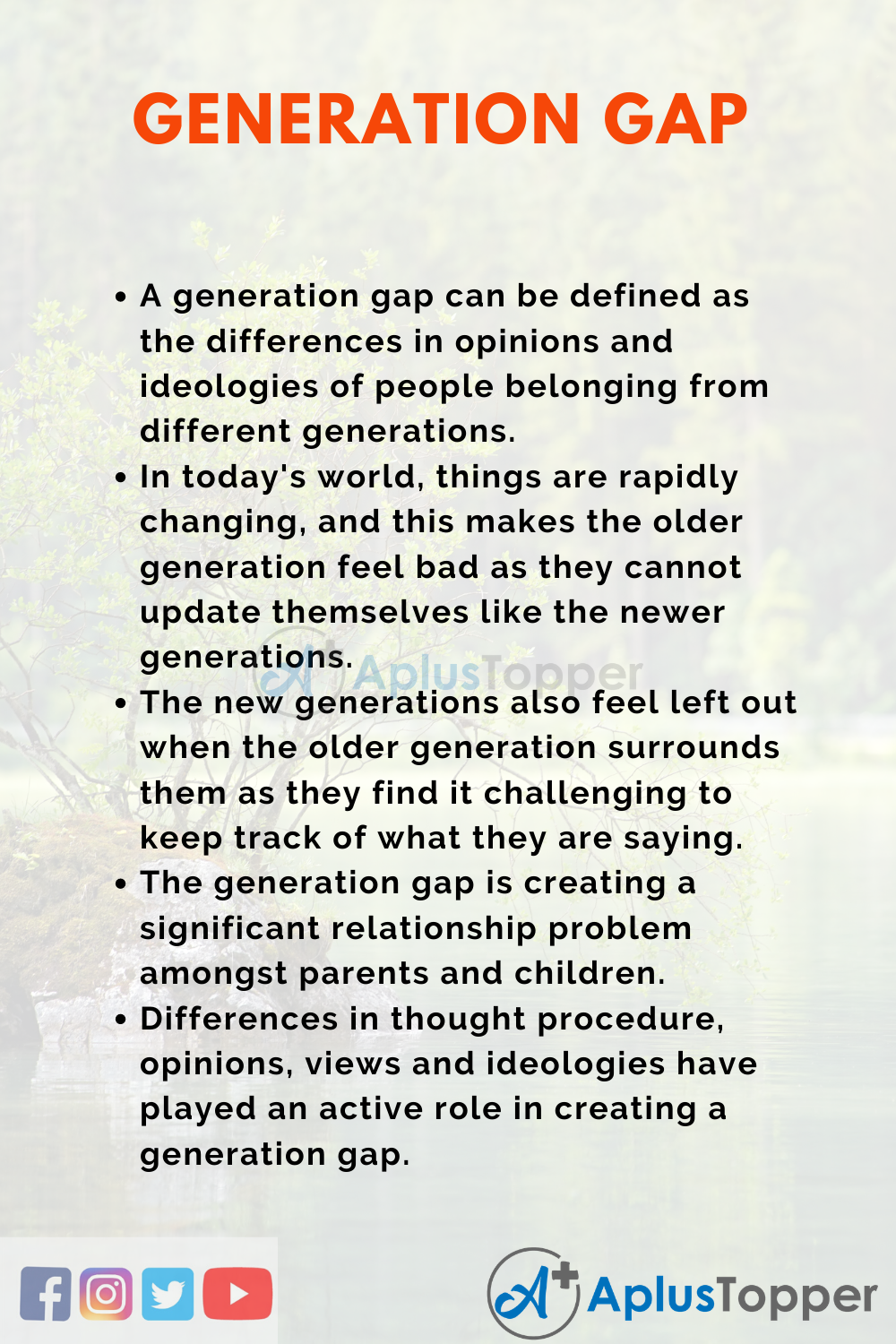 Today’s world is changing at a rapid tempo, and this is causing people born in different ages to distance themselves from one another. For example, if we consider India before and after independence, the change is massive. With this change, comes the shift in people’s thinking pattern and opinions. This gap of generation is also affected by the whole drastic change in the economic, social environment, and cultural status. 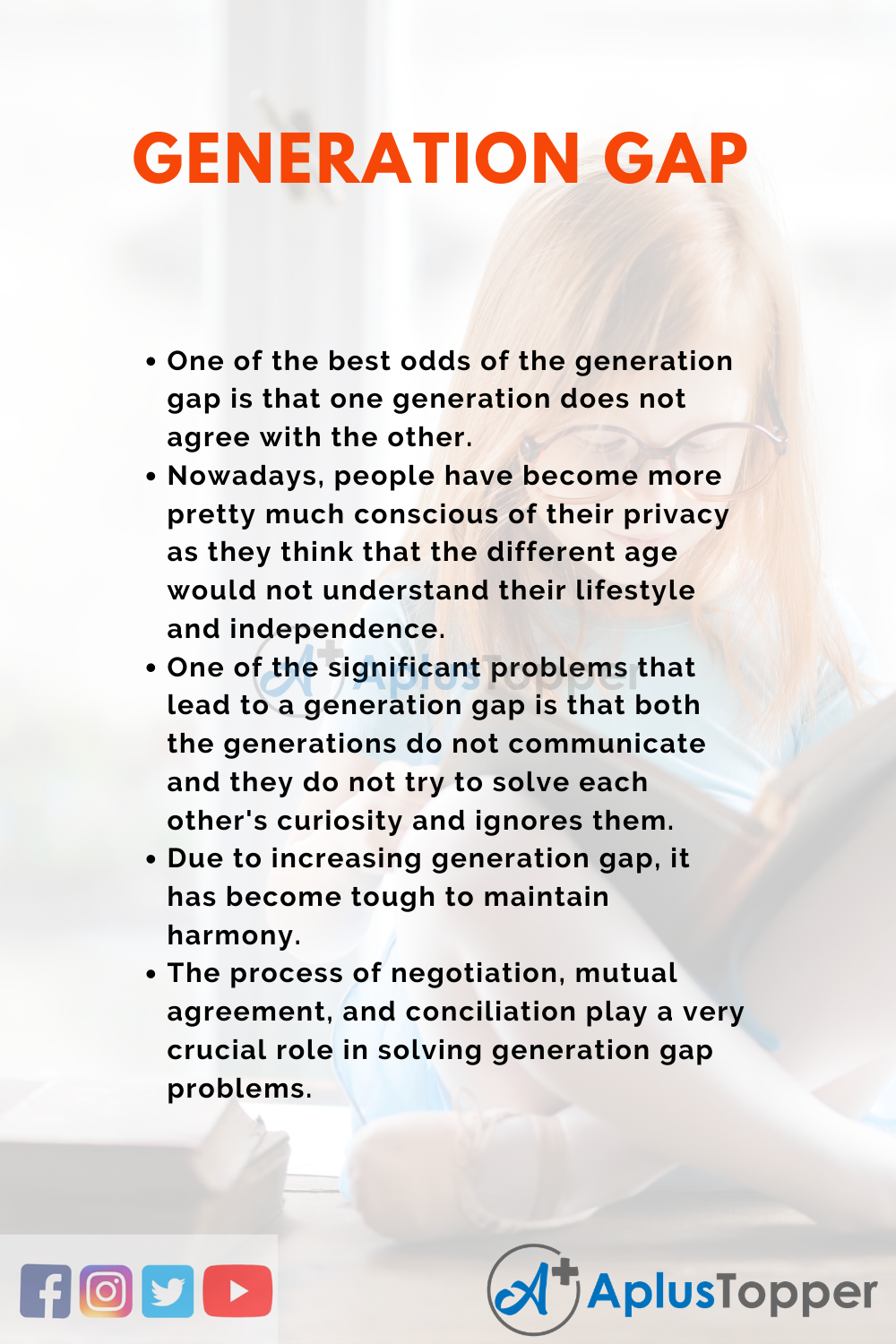 FAQ’s of Essay on Generation Gap

Answer:
Generation gap generally occurs when people belonging from different generations have different beliefs, opinions, actions and interests. The generation gaps are created mainly due to rapid changes in the society, increased life expectancy, and mobility of the community.

Question 2.
How can we define the term “generation gap”?

Question 3.
Who is responsible for creating generation gaps?

Answer:
Generation gaps are created by humans belonging from any generation. People either think that one’s elder to them would not respect their choices and would not be able to understand their opinions and vice versa. This creates a sense of stubbornness and loneliness which is harmful to both the generations. People stop talking to each other thinking that they would not get what the other person tries to explain.

Question 4.
Are there any ways to prevent generation gaps?

Answer:
There are a few ways in each generation gap may be avoided, some of them are: one should not act like they know it all and must try to understand what the other person has to explain. If one does not infer any terminology, the other person should try to explain it with calmness instead of ignoring it. One must try to improve their communicating skills so that individuals belonging from different generations can also freely talk. By following these simple steps, the generation gap can be avoided.