Essay On Fundamental Rights: The constitution of India empowers its people with six fundamental rights, which are right to equality, right to freedom, right against exploitation, right to freedom of religion, cultural and educational rights and right to constitutional remedies. These rights are the basis on which the law and order of the country work.

Every citizen of the country, irrespective of caste, religion, colour, gender or sex has these basic rights. Although, most of these rights can be and will be suspended in case of a national emergency such as wars or pandemics.

In this essay on fundamental rights, we will be talking about each of the 6 rights and its significance to the country.

The true measure of the greatness of a country is analysed through the effective implementation of the rights of its citizen. Every country awards certain rights (with limitations) to its citizens. A healthy administration is the one that provides absolute rights and freedoms to the people, and India is one such country in the world. The constitution of India provides its citizens with 6 fundamental rights, based on which other rights are derived. The judiciary, the executive and the legislature are the custodians of the implementation of the fundamental rights guaranteed to the people of India.

Right to Equality: The first fundamental right enshrined in the constitution of India is the right to equality. This particular fundamental right has special importance for a country as diverse as India. India has a mixed population with diversity in each and every sphere of life. There is diversity in religion, in language, in ethnicity, in the food we eat, in the clothes we wear and the movies we watch. From divisions of classes based on income to religion and caste and geographical locations, its a miracle on earth that a country as diverse as India has shown so much unity. And a huge amount of credit goes to the right to equality. This right provides and ensures equality to everyone in the eye of the law irrespective of caste, creed, gender, sex, religion or ethnicity.

Right Against Exploitation: While there are class divisions across India, this right holds water to avoid caste-based discrimination that accounts to human rights violations. Certain practices that exist in India are untouchability and discrimination based on caste and religion. This right protects the vulnerable sections of our society from being exploited by the powerful sections of the same society. Human trafficking, prostitution, child labor or enslavement are some of the issues that right against exploitation protects people from.

Right to Freedom of Religion: India has nine main regions that millions of people practice, which are Hinduism, Islam, Christianity, Buddhism, Jainism, Sikhism, Judaism, Zoroastrianism and the Baha’i Faith. One aspect that needs to be clear is that this is that category of a fundamental right that makes our country secular in nature and democratic in values. There is a common misconception that India is a Hindu nation, which is not only false but a dangerous thought to the very secular fabric of our country and a threat to the democratic values of the constitution. Every religion has equal space in the country irrespective of the number of people following it. While certain countries have declared their official religion like Pakistan which is an Islam country, Nepal a Hindu country, or Irale a Jewish country, India is a country for all and that is the beauty of our nation. Every person and every community have the right to practice whichever religion they wish to without fear of backlash from any other community, or in a worst-case scenario, the administration itself. It is the administration’s responsibility that this fundamental right is implemented both in spirit as well in practice.

Cultural and Educational Rights: This right guarantees and provides free education to all the people in the country. This also empowers cultural, religious, and linguistic minorities in the country against any sort of discrimination.

Right to Constitutional Remedies: If any of the above fundamental rights are violated, people are empowered to keep the administration and the concerned people accountable to it. Judiciary plays a pivotal role in this matter. 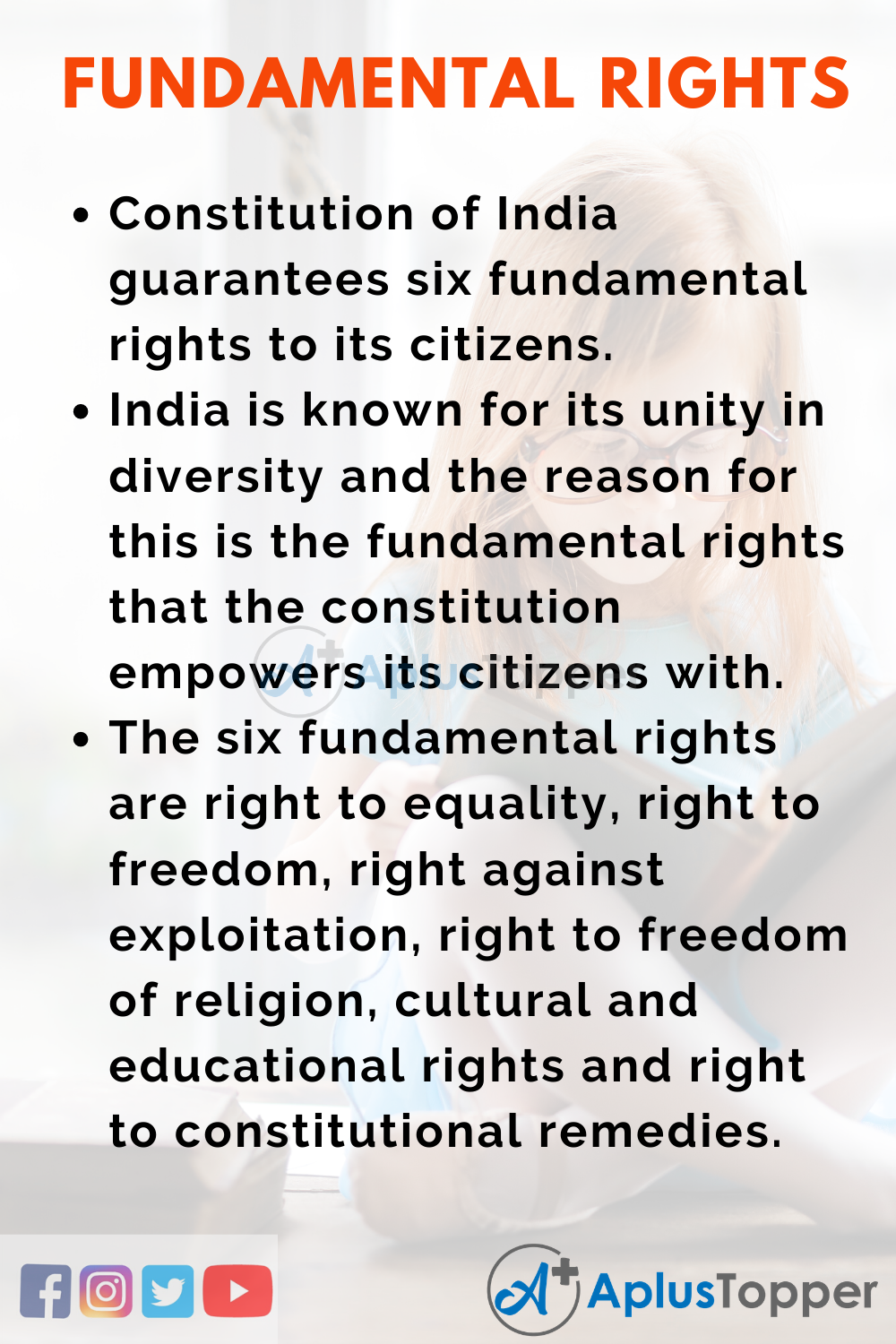 Find below a short essay on fundamental rights in India is helpful to students of classes 1,2,3,4,5 and 6. This can be used by schoolchildren and college students for various academic purposes.

But, responsible citizens need to remember that none of these rights is absolute in nature. If any crime or hatred or a threat to national security is found by people whilst making use of these rights, then the administration has the liberty to nullify the right to that particular person. For example, prisoners, enemies of the state, fraudster or people seriously accused in the court of law will have few of their fundamental rights nullified. 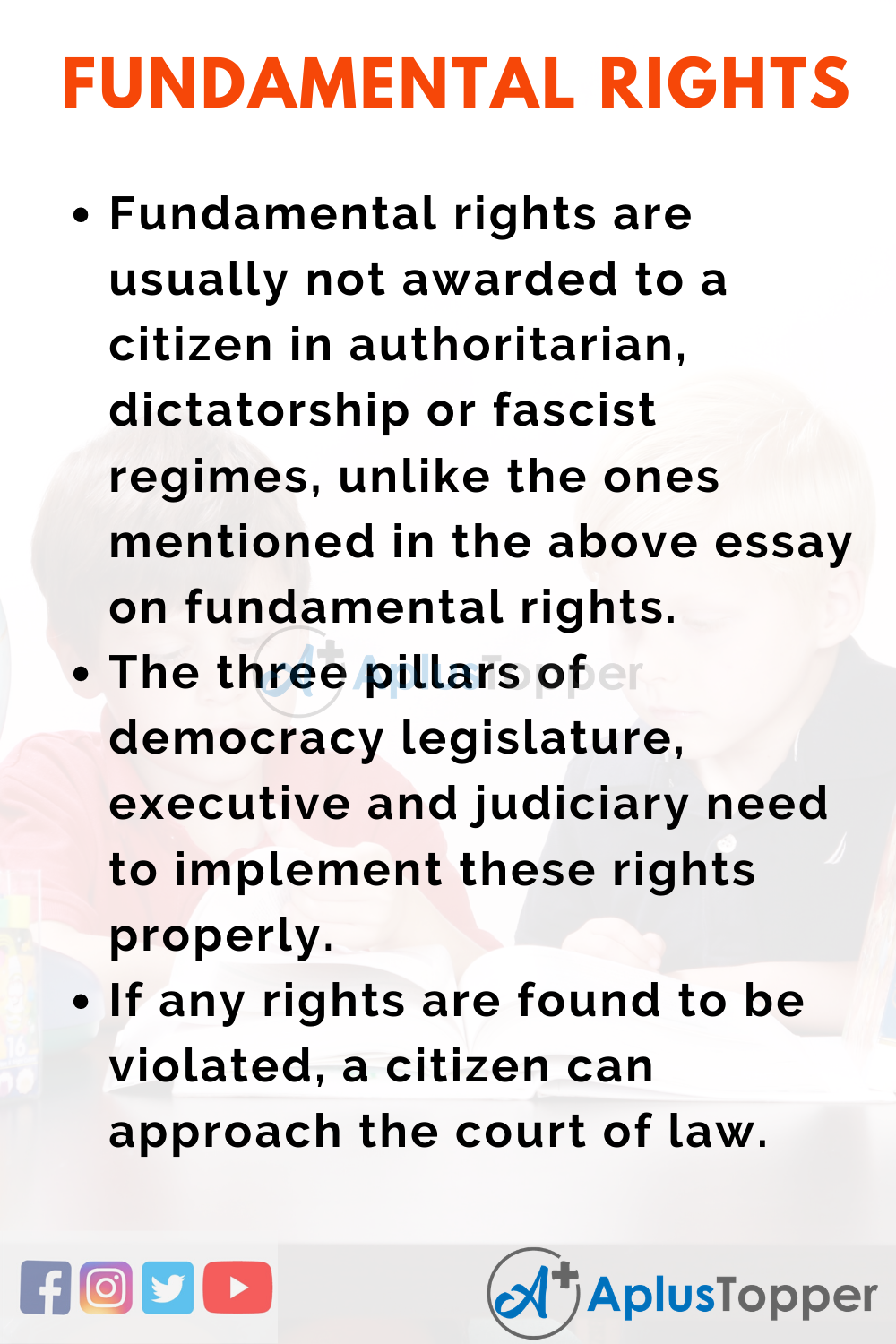 FAQ’s on Essay On Fundamental Rights in India

Question 1.
Who is the father of the Indian constitution?

Answer:
B.R Ambedkar is the father of the Indian constitution.

Question 2.
Are the fundamental rights awarded to foreigners?

Answer:
Certain rights are awarded to foreigners except to people from enemy countries.

Question 3.
What is article 21 of Indian conditions?

Answer:
Article 21 gives the right to life under the Indian constitution to its citizens.

Question 4.
What are certain problems in implementing fundamental rights?

Answer:
Discrimination, untouchability, religion hatred are of the challenges in implementing the fundamental rights effectively.