Essay on Freedom of Speech: The term “freedom of speech” has been taken out of context and given various form of interpretation by people who either don’t understand the term completely or have an agenda in mind. This is a fundamental freedom that every democratic country guarantees its citizens. In this particular freedom of speech essay, we are going to articulate the term and decipher its meaning and provide a well rounded and informative essay on freedom of speech in India and what it means in other countries with different forms of the governance model.

If you are searching for informative and well-articulated freedom of speech essay, then you have come to the right place. We have provided two different essays with a 600-word limit and another one with a 200-word limit. Both of the freedom of speech essay mentioned below covers the topic well and can be used by students of class 6, 7, 8, 9 and 10 for a school project, assignment, essay writing, class test and examination.

Long Essay on Freedom of Speech 600 Words in English

India and Indians are known for their secular fabric and for uploading democratic values in the world. Hence, it becomes necessary to enforce freedom of speech in India to save and celebrate our democracy. Freedom of speech is not just about our fundamental rights, it is, in fact, a fundamental duty that every citizen should rightfully do in order to save the essence of our democracy.

The kind of freedom of speech you find in matured democratic countries like UK or USA or France or Germany is not seen in authoritarian governments like Malayasia or China or Syria and in failed democracies Pakisthan or Rwanda. In fact, these are failed governance systems because of the lack of freedom of speech in their countries. The freedom of speech in a country can aptly be measured by the freedom of the press. A strong media reflects a strong, liberal and a healthy democracy with an appetite to take criticisms and dissent in a positive manner.

Certain governments are very hostile towards any form of dissent of criticism coming towards them and they try to stifle the voices that might be against them. This is a dangerous precedent for a country. For example, in India, there are more than 130 crore people and we can rest assured that not every person will have the same line of thinking and the same opinion on a topic. The difference of opinions and respect we have for each other in a policy-making body is what makes a true democracy.

All sides and angles of the topic should be considered before making an informed choice. A good democracy will involve all the stakeholders before formulating policy but a bad one will blindside its critics and takes unilateral and authoritarian policies and force them down the throat of their citizens.

One of the biggest examples of curbing freedom of speech in India is the stifling of criticism by using a draconian and Britsh-era law called as sedition law. The sedition law, through section 124A of Indian Penal Code, says that if a person by words either by written or spoken brings hatred, contempt or excites tension towards a government or a person can be fined or jailed or both. This law is never used in its spirit. British used to use this law to silence the freedom fighters of India and now the ruling parties of India use this to stifle the dissenters and in turn, is harming the democratic values of the country.

Also, there are various laws that protect the people of India in rightly fully exercising their freedom of expression. But while the laws stay, its the implementation of these laws that are proving to be a big challenge for the authorities. 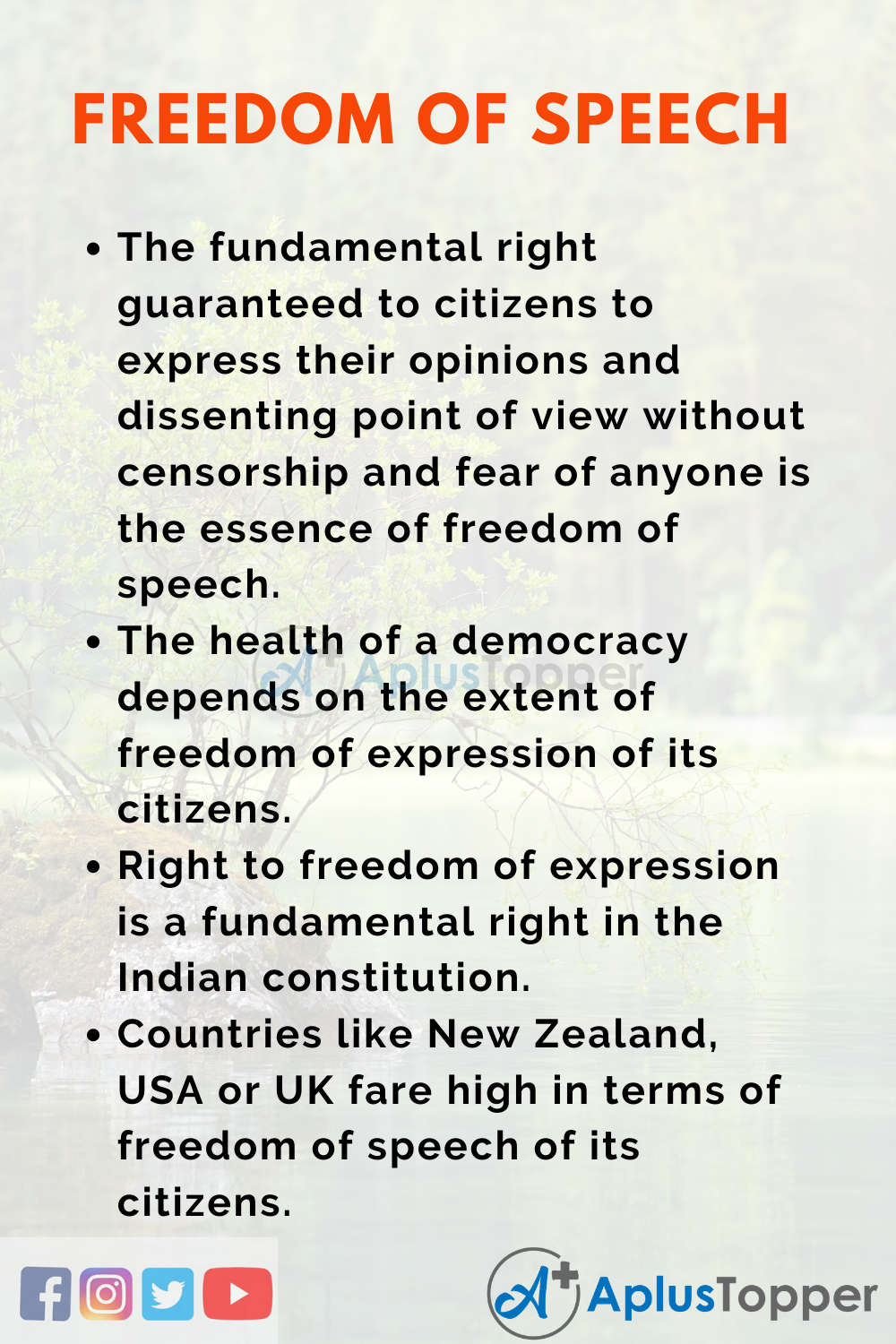 Short Essay on Freedom of speech essay 200 Words in English

But at the same time, there are many instances where freedom of speech leads in creating hatred and spread bigotry amongst communities and provoke people to resort to violence. Taking advantage of the freedom of speech has, in many cases, lead to communal riots in India such as the 2020 Delhi riots or the 2002 Godhra riots.

10 lines on Freedom of Speech Essay in English FAQs on Freedom of Speech Essay

Question 1.
What is freedom of speech?

Answer:
The ability to voice our opinions in public without fear of backlash from anyone.

Question 2.
Which country guarantees the highest amount of freedom of speech to its people?

Answer:
the USA fared high on the freedom of speech score with 5,73.

Question 3.
Is freedom of speech absolute?

Answer:
No, freedom of speech is not absolute and has its limitation.

Question 4.
What happens if there is no freedom of speech?

Answer:
If there is no freedom of speech, a country will become a police and military state with no democratic and humanitarian values in it