Essay on Female Foeticide: In the land where we worship Goddess ‘Durga’ as ‘shakti’, thousands of innocent girls are killed in the wombs of their mothers, for the selfish greed of having only a male child.

Below we have given a long essay on Female Foeticide of 500 words is helpful for classes 7, 8, 9 and 10 and Competitive Exam Aspirants. This long essay on the topic is suitable for students of class 7 to class 10, and also for competitive exam aspirants.

Female foeticide is a matter of “deep shame and a cause of great concern”, these were the words of the Prime Minister Narendra Modi when he spoke on the occasion of the ‘International Day for the Girl Child’ i.e. 11th October 2014.

Equality of rights becomes secondary, when primarily females are not even allowed to enter into this world. The evil of female foeticide is deeply entrenched in our society and pervades all classes and castes of the society. A family does not think twice before killing a girl-child, though they would ceremoniously pray to Goddess Lakshmi, Kali and Durga four times a day!

While it is often believed that such ill-practices are largely part of the lower strata of society, shockingly, the recent trend reveals that many wealthy Indian couples are flocking to neighbouring countries like Thailand to escape laws here, as gender-detection is illegal in India. According to a recent report by a national daily “A growing number of couples are finding a way around the ban by going to Thailand where there are no laws against it. Doctors use Pre-implantation Genetic Diagnosis (PGD), a method that involves producing embryos through IVF and implanting only those of the desired gender (male) into the womb. At around $8500, excluding flights, it’s not cheap, but it seems a price couples are willing to pay.”

It is interesting to analyse the reasons that lead to such a biased mind-set. Some believe that boys are an investment as they would grow family’s lineage and would secure their parent’s future, in comparison to girls who are considered liability as they need to be warded off with enormous dowry.

Furthermore, there are others who believe that in a male-dominated society, female safety issues are immense and since bringing up girls involves trouble, boys are an easy option.

Interestingly, a lot of measures have been taken to fight against this crime. The Ministry of Health and Family Welfare of India has targeted education and media advertisements to reach clinics and medical professionals to increase awareness. The Indian Medical Association has undertaken efforts to prevent prenatal sex determination by promoting ‘Beti Bachao’ (save the daughters) during its meetings and conferences. The Beti-Bachao campaign uses media to raise awareness of the gender disparities creating and resulting from sex-selective abortion.

Beti-Bachao activities include rallies, posters, short-videos and television commercials, some of which are sponsored by state and local governments and other organisations. Many celebrities in India have publicly supported the Beti-Bachao campaign.

Aamir Khan devoted the 1st episode ‘Daughters are Precious’ of his show Satyamev Jayate to raise awareness of this widespread practice. Rapid responses were shown by local governments after airing of this show, showing the effect of media and nationwide awareness on the issue.

Other recent policy initiative adopted by many states in India, attempts to address the assumed economic disadvantage of girls by offering support to girls and their parents. These policies provide conditional cash transfer and scholarships only available to girls where payments to a girl and her parents are linked to various stages of her life, such as when she is born, childhood immunisation, school and her marriage past age 21. 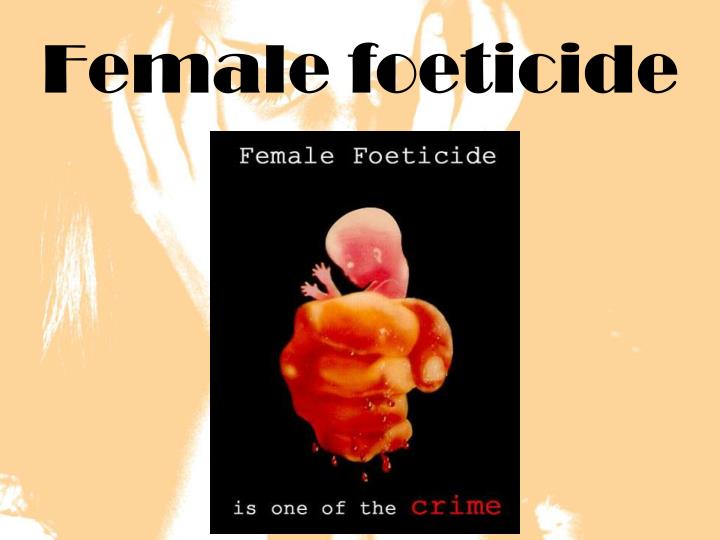 Below we have given a short essay on Female Foeticide is for Classes 1, 2, 3, 4, 5, and 6. This short essay on the topic is suitable for students of class 6 and below.

Some states are offering higher pension benefits to parents who raise one or two girls. Different states have been experimenting with various innovations in their girl-driven welfare policies. It is mentioned in Quran “Kill not your children on a plea of want. We provide sustenance for you and for them. Come not near shameful deeds, whether open or secret. Take not life which Allah has made sacred.”

Today, women have reached the Moon and Mount Everest, but on Earth her situation is much the same. From Saina Nehwal to Kalpana Chawla, from our 1st woman President Pratibha Patil, to business woman Naina Lai Kidwai, females have left no sphere unturned to prove their worth and credibility to the society. However, much is left desired.

There is a great need to empower women, so that they become self-reliant and capable of taking their own decisions, rather than getting influenced and pressurised by in-laws or husbands or other’social pressures. Through greater awareness, consideration and understanding, we can bring a shift in the perception of the society to give equal space to the girl-child. A little change in our attitude is all that is needed to welcome daughters in our hearts and in this world.